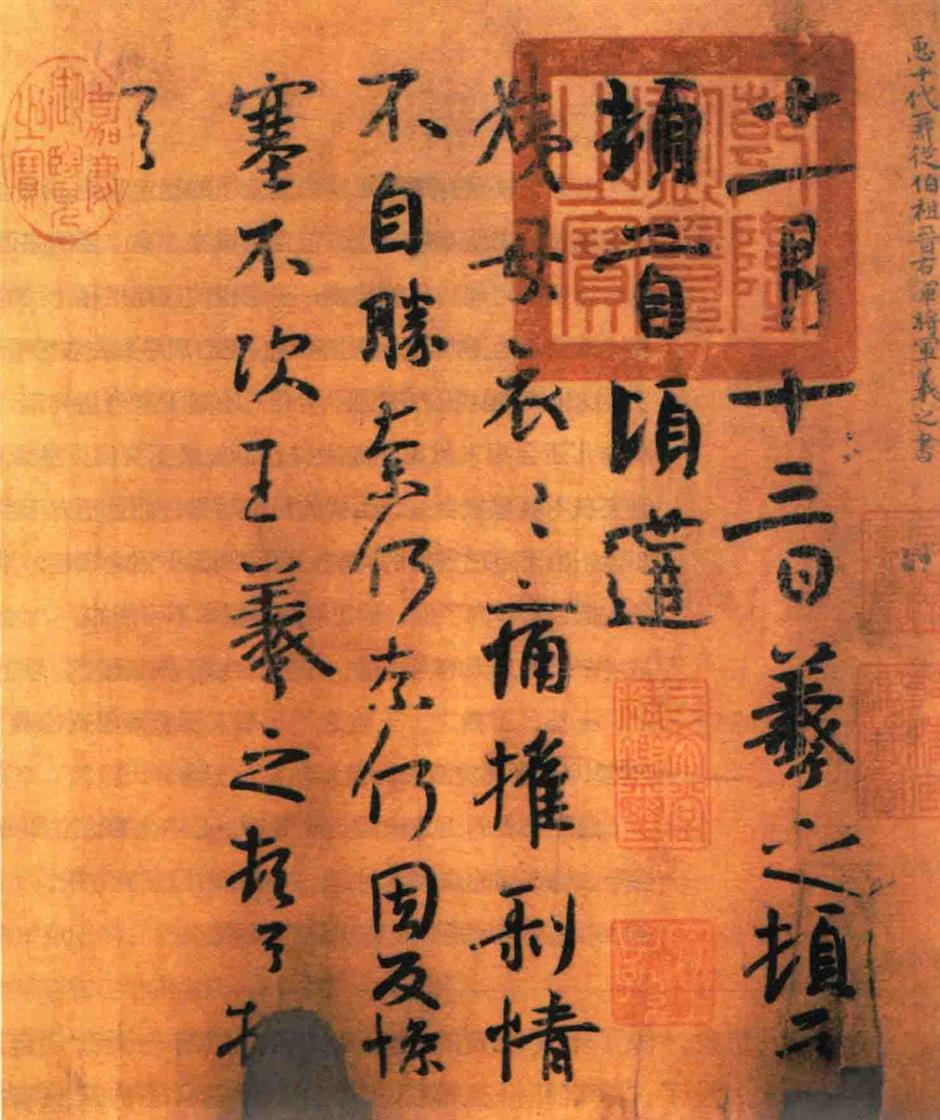 “Yimu Tie” is one of the representative calligraphy pieces written by Wang Xizhi.

One day in AD 692, there was a surprising ecstasy on the face of Empress Wu Zetian (AD 624-705), who is considered the only female monarch in the history of China.

The one she was eager to call in was Wang Fangqing, a deputy minister and the 10th generation descendant of Wang Xizhi (AD 303-361), the prestigious “Sage of Calligraphy.”

But Wang Fangqing was so intimidated by the upcoming visit that he pretended to be ill to avoid it.

For several days before the visit, he spent most of his time staying home, sleepless at night and fixing his eyes on a delicate box with a heavy heart. The box contained 10 volumes of acclaimed calligraphy works created by his ancestors.

“Your Highness, the monarch has long arms. Perhaps it’d be better if you offer up the box to the empress,” his servant suggested.

An enthusiastic calligraphy fan, Wu had issued a decree to collect all kinds of valued calligraphy works.

Wang Fangqing faced a dilemma: to let down his ancestors who passed down numerous cherished relics, including “Xinyue Tie” by Wang Huizhi, the fifth son of Wang Xizhi, “Nianjiuri Tie” by the seventh son Wang Xianzhi, and the most precious “Yimu Tie,” which Wang Xizhi wrote for his teacher Wei Shuo (AD 272-349), also known as Lady Wei; or to go against the empress’ will and take the consequence which might put him in jail?

He pocketed the rewards from the empress as he finally handed over the 10 volumes. However, soon after that, the deputy minister did come down with illness as the rumors spread that he might have much more hidden treasures. He couldn’t help but get worried: What if the empress believed those rumors?

Cold shivers ran down Wang’s back as he was asked to speak with Empress Wu again. To his surprise, the empress commissioned some court calligraphers to copy the artworks and returned the box he turned in with all masterpieces bound in silk.

“The Old Book of Tang” (“Jiu Tang Shu”), the first official dynastic history of the Tang Dynasty (AD 618-907), can validate this anecdote as well as other stories implying that Wu didn’t keep others’ treasures for herself.

In the compilation of copied version of these works from the Wangs, which was later named “Wansui Tongtian Tie,” the “Yimu Tie” mentioned above stands out.

The 26.3-centimeter-long and 53.8-centimeter-wide running-cursive script by Wang Xizhi contains 42 characters in six lines, in which he expressed his grief when hearing Lady Wei, who he called “yimu” (aunt), passed away.

Lady Wei, whose most famous disciple was Wang Xizhi, established consequential rules about the regular script. Her notable work “The Picture of Ink Brush” (“Bizhen Tu”) introduces the “Seven Powers” that later became the famous “Eight Principles of The Character Yong.” Taking the Chinese character yong (永) as an example, it explains how to write right common stokes in regular script.

Xiang Dushou, a well-known merchant and collector during the Ming Dynasty (1368-1644), one day found his younger brother Xiang Yuanbian, a wealthy businessman and pawnbroker, was unhappy as he got a copy of Wang Xizhi’s “Yimu Tie,” which cost him a fortune.

He reckoned that two characters in the letter didn’t follow the style of the great calligrapher and the artwork was probably fake.

To comfort his younger brother and out of his appreciation of the piece, Xiang Dushou bought it instead. It turned out to be the authentic royal copy of “Yimu Tie,” ordered by Empress Wu.

The valuable calligraphy survived two fires in the Ming and Qing (1644-1911) dynasties. Displayed in today’s Liaoning Provincial Museum, visitors can see the burning marks tracing the outline of the copy.