Traveling back through ancient art and poems

Visitors take pictures of a large Chinese painting depicting undulating mountains and rivers which is created in the Tang Dynasty (AD 618-907) at the Zhejiang Exhibition Hall. The “Tang Dynasty Poems Road in Eastern Zhejiang” exhibition will run through February 26.

The Tang Dynasty (AD 618-907) was one of the most thriving times in China’s history and produced the “golden age” of classic Chinese poetry. Even today, about 2,300 Tang Dynasty poems are still popular among Chinese speakers around the world.

The eastern part of Zhejiang Province attracted an endless stream of poets during the Tang Dynasty by virtue of its undulating hills, tranquil bamboo forests and enriched culture. Renowned poets, including Li Bai (AD 701-762), Du Fu (AD 712-770) and Bai Juyi (AD 772-846), visited this area and wrote well-known poems about the landscape.

In the late 1980s, historians and literateurs came up with the concept “Tang Dynasty Poems Road in Eastern Zhejiang,” referring to a track linking scenic and cultural spots that once attracted poets to the area.

After years of research, the route has been established, starting from Xiling Wharf on the Qiantang River, tracing East Zhejiang Canal, Cao’e River, Tanxi Creek, Tianmu Mountain and ending at Tiantai Mountain. During the 300-year dynasty, around 500 poets wrote more than 1,500 poems inspired by the view of this route.

In 2020, groups from the China Academy of Art and Zhejiang Institute of Culture and History spent 17 days walking 1,925 kilometers along this route. They visited hamlets and cultural relics in seclusion, some of which are located in off-the-beaten track locations and hidden in forests.

Professors and students from the art academy created a series of artworks inspired by views along the route which are on display in an exhibition at the Zhejiang Exhibition Hall through February 26.

Since ancient poems often depicted secluded landscapes, highlighting man’s insignificance against nature and the poets’ detached attitude toward life, the exhibition aspires to rebuild that spiritual world through art.

Tang Dynasty literatus traveled throughout eastern Zhejiang, especially when they faced setbacks in their pursuits of political careers, so the mountains and rivers along the route won their hearts.

The Shanxi River and Tianmu Mountain are at the heart of the “Tang Dynasty Poems Road in Eastern Zhejiang.”

According to historical records, Xinchang and Shengzhou counties were called Shanxian County during the Tang Dynasty. The Shanxi River, a tributary of the Qiantang River, runs through the area, while Tianmu Mountain is at the southern edge.

Some of the exhibition’s highlights are large hanging silk drapes painted with landscapes, figures and animals themed around Tianmu Mountain and the Shanxi River. 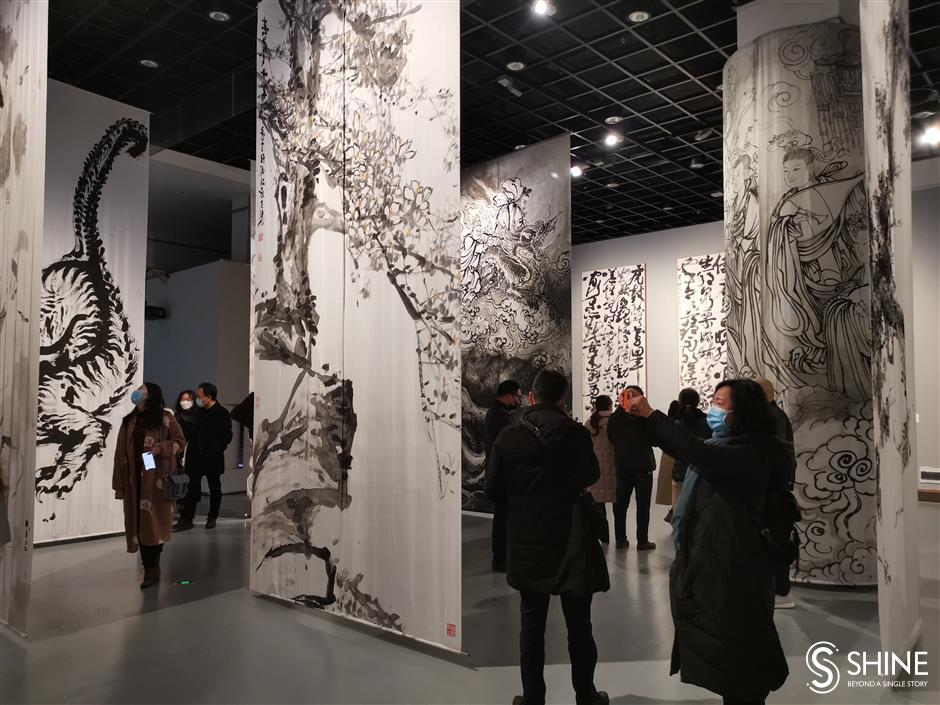 Large hanging silk drapes painted with landscapes, figures and animals themed around Tianmu Mountain and the Shanxi River are on display.

Li Bai, the Tang Dynasty’s “Immortal Poet,” visited the mountain and river, marveling at their grandeur. He then created the popular poem “Tianmu Mountain Ascended in a Dream.”

“This poem inspired us, and we try to understand ancient scholars’ moods and thoughts when they visited this mountain,” said Professor Liu Haiyong of the art academy. “Also, we challenged ourselves by drawing on large silk cloths, which is more difficult than painting on traditional rice paper.”

During the Tang Dynasty, poets traveled along the Shanxi River to reach the mountains they wanted to see. After visiting Tianmu Mountain, they commonly headed to Tiantai Mountain where the Tiantai Sect began. Some literatus retreated to temples at Tiantai, searching for inner peace and detached attitudes.

The sect is an important school of Buddhist teaching in Asia. One of its most popular sites is Guoqing Temple which dates back as far as the Sui Dynasty (AD 581-618) when emperors encouraged the spread of Buddhism across the country.

In ancient times, Yue Kiln was popular with the imperial court by its elaborate grayish-green celadon. Among them, mise porcelain (秘色瓷), which was in celadon, was considered the best porcelain ever produced in China.

Tang Dynasty poet Lu Guimeng was obsessed with mise porcelain and wrote a famous poem to glorify its beauty.

For the exhibition, calligrapher Luo Hengguang wrote a cursive script version of this poem. 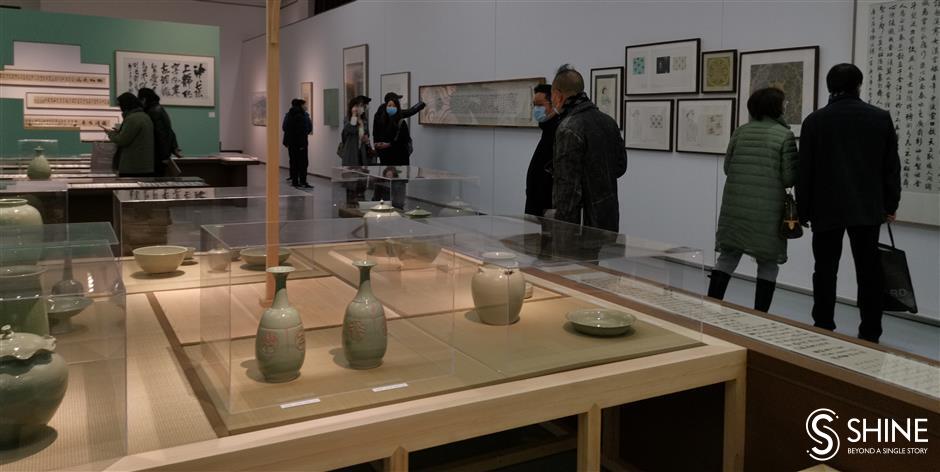 Visitors take a close look at the exhibits including paintings, calligraphy and porcelain in the museum.