The Shi Family Grand Courtyard is typical of the domestic architecture used in north China during the Qing Dynasty (1644-1911).

Located in Tianjin, about an hour’s drive from the capital of Beijing, the 140-year-old compound sprawls more than 7,200 square meters and houses 15 courtyards, 278 rooms, opera stages, gardens, Buddha halls and horse stables.

The front gate opens onto a long, wide main road and the construction’s principal axis links the first five buildings.

They were built higher from the south to the north, which implied “moving up to higher positions” in Chinese culture. At the same time, each of the building’s doors was designed with three steps, meaning “three consecutive promotions.”

The Shi family built up its fortunes more than one century ago by trading and shipping grain and cotton when Tianjin was a sea-shipping center at the time. In the early years of the Qing Dynasty, the family owned large patches of land, banks, pawnshops, clothes stores and vegetable fields. The compound was set up with high walls in the city center, and everyone behind those big walls was surnamed Shi.

On the eastern side of the main road, studies, waiting rooms, houses for female members and accounting rooms were neatly aligned.

The buildings on the western side were built to receive the family’s distinguished guests.

There were the main hall, opera stage and ancestral temple, with works and materials more sophisticated than those on the eastern side.

The gorgeous opera room, the biggest one among domestic houses in north China, could accommodate 200 people dining and enjoying a show at the same time. Peking Opera masters, including Sun Juxian (1841-1931) and Tan Xinpei (1847-1917), were once invited to perform here. 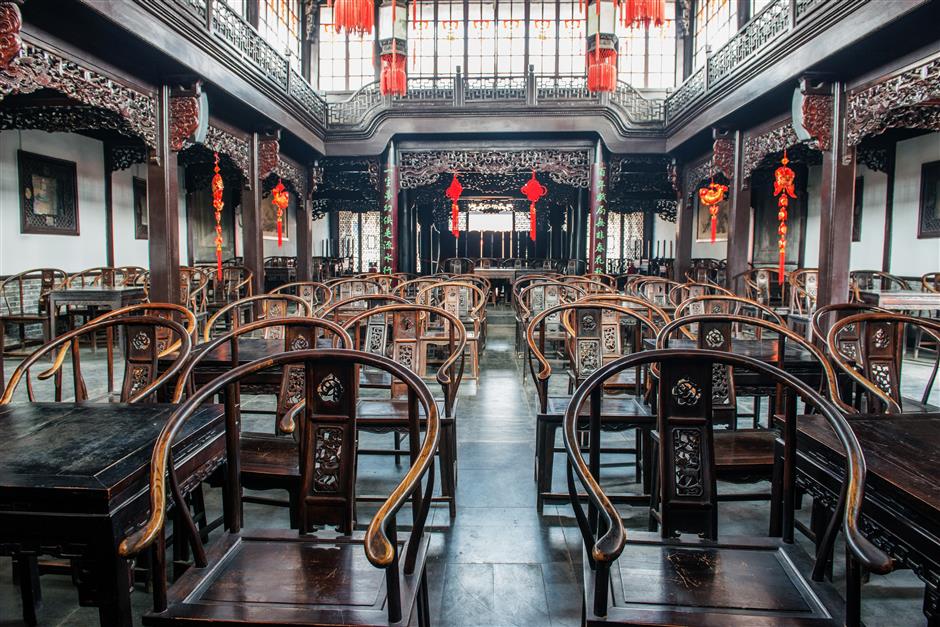 The opera room on the western side of the Shi Family Grand Courtyard could accommodate 200 people dining and enjoying a show at the same time during its heyday in the 19th and early 20th century.

In 1827, the Shi family divided the property among their sons, into four halls of Fushan, Zhenglian, Tianci and Zunmei, but they still lived together.

Only the Zunmei Hall, of the fifth son Shi Baoheng, is well kept today. It thrived under the son’s grandson Shi Yuanshi, when the other halls of his siblings had fallen into decline.

He was good at accumulating business wealth and making friends with government officials. In 1900, he sponsored the Qing Dynasty army to fight against the eight-power allied forces and was awarded with a forth-grade royal official title by Cixi, the country’s empress dowager.

Zunmei Hall is known for its fine design and meticulous architectural work. The carvings of horses and phoenix on the front door’s posts took two craftsmen an entire year to finish.

Shi splurged hundreds of thousands of silver ingots to employ skilled designers and construction workers to build the hall, a combination of royal style and domestic fashion. It used quality bricks and wood materials cut from trees more than 50 years old.

Many wall bricks were engraved with auspicious patterns, such as lotus flowers, pearls and peaches signifying longevity and good blessings, which represented high-level decoration art in ancient Chinese architecture.

In 1918, on Shi’s 70th birthday party, he invited hundreds of friends for an ultra-luxurious celebration.

Unfortunately, he died of skin cancer the following year. His family spared no effort and expense with his funeral, which consumed a large part of the family’s wealth. With years of civil wars, the business shrunk dramatically and the descendants of Zunmei Hall had to sell the land and leave their houses. The golden days of the Shi family never returned.

Today the compound has been opened to the public as a museum, and there is a guide on hand to talk about the family’s rise and fall from grace.