Ordination terrace stands strong as a symbol of Buddhist faith 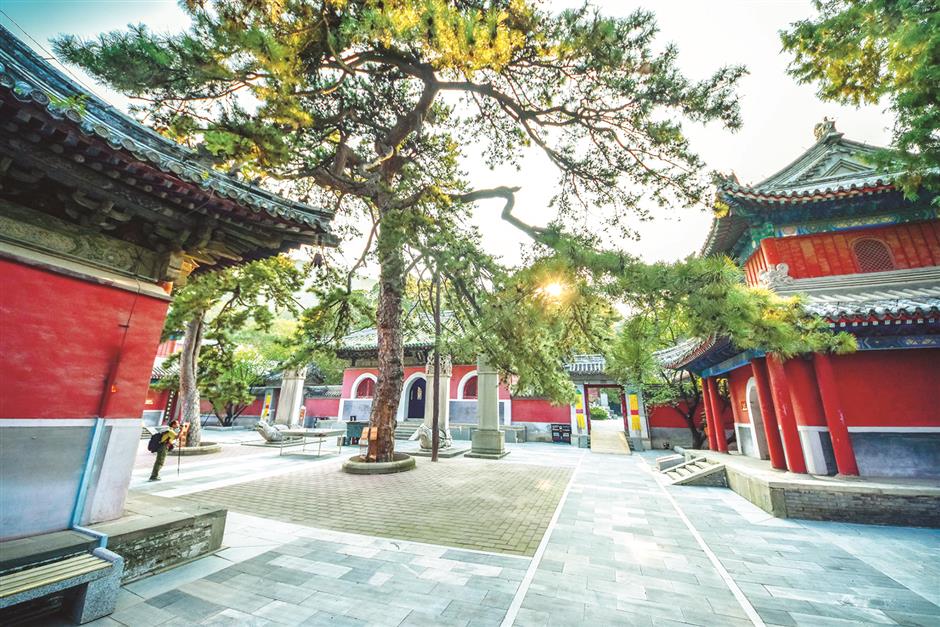 Jietai Temple, hidden halfway down Ma’an Mountain in Beijing, is well known among China’s ancient Buddhists for its “Jie Tai,” a square stone ordination terrace to initiate people into monkhood.

Jietai Temple, hidden halfway down Ma’an Mountain, about 35 kilometers from downtown Beijing, is well known among China’s ancient Buddhists for its “Jie Tai,” a square stone ordination terrace to initiate people into monkhood.

The 3.5-meter-high, white-marble platform, a relic from the Ming Dynasty (1368-1644), is a sacred shrine for Sakyamuni, sitting in the center and surrounded by 113 statues of Jieshen (commandment) Gods, each about 33 centimeters tall. In front of the Buddha, there stands 10 beautifully carved wooden chairs for 10 master monks, who would be invited to witness a monkhood ceremony prior to his monastic life.

The 113 commandment gods, in clay and gold, are rare art treasures.

Solemn or ferocious-looking, in armor or long robes, the gods are varied in facial expressions and body gestures. They are the only ancient clay sculptures themed with Jieshen Gods discovered in Beijing.

As the temple’s landmark, the main hall of the stone platform is decorated in typical Chinese-style architecture. Three characters “xuan fo chang” (Buddha’s place), written by Yuan Shikai (1859-1916), head of the Republic of China, is hung high on the front door.

Painted with golden murals, the ceiling of the hall was designed with the traditional “dou ba zao jing” (octagon in the shape of an inverted well).

There are many small niches carved on the wall of the well, each housing a mini golden Buddha.

The son renovated the northern hall and courtyard as his palace, an exquisite garden famed for its beautiful peony blossoms. The architecture, made up of two courtyards, was a perfect combination of a traditional Beijing courtyard house and a landscaped garden of south China.

Past the entrance, built and designed with grotesque stones from Taihu Lake, in Jiangsu Province, a meandering veranda links the rooms and leads to a rockery in the west. A flower arch separates the two courtyards. Trees, peonies, rocks, houses and water make an idyllic picture. It later became an exclusive getaway for many celebrities at the time, including Peking Opera artist Mei Lanfang (1894-1961).

The Pavilion of Qianfo (Thousand Buddhas) was originally built in the Liao Dynasty (907-1125) and was renovated during the Ming and Qing dynasties. The architecture was a three-story wooden tower that was 30 meters tall. In 1965, it was dismantled and the wood materials were relocated to renovate the Zhaigong Palace in Temple of Heaven. As one of the most prominent renovation projects, the pavilion is still under reconstruction and will be open to the public again in the future.

Maitreya, the Buddha of the future, lies in the courtyard of the fomer Pavilion of Qianfo, wearing a big belly laugh. As the only open-air Buddha, the statue made of centuries-old camphor wood smiles in the sunshine, while on rainy days he shows his tolerance and optimism to those who come to worship.

Camphor, with hard texture and a light fragrance, was one of the main wood materials used in royal court of Ming and Qing dynasties. The older the camphor wood is, the more precious it is. And this piece, said to be 1,000 years old, is definitely a priceless treasure. At one time a giant iron bell, 3.2 meters high and 2.2 meters in diameter, leaned against the mountain in the temple’s northeast. It was said on the last day in the 6th month of the lunar calender, the bell would ring and its sound could be heard clearly by the locals 20 kilometers away.

But today the old bell has gone, and a bronze one, 1.6 meters tall, sits in its place. The bell, set up in the Ming Dynasty, was designed with dragon patterns and was used to ring on the monkhood ceremony in the main hall. But today it has been relocated to the open air for visitors to strike for good blessings.