"Travel Through Cities,” an exhibition of Luo Weimin’s ink-wash painting works, was a success. He applied the techniques of traditional Chinese painting to Western oil painting, using his brushes to revive the landscapes of streets in European countries with just several strokes on rice paper.

Now, he has another culture feast — “Zhang Luo Zhang Luo for the Chinese New Year” — with paintings and calligraphy on display at Nanxiang Painting and Art Creative Center through February 20.

Zhangluo, which literally means “gearing up for festivals by purchasing food or decorate houses,” is actually the surnames of the four artists in the exhibition — Zhang Anpu, Zhang Peihua, Zhang Weiren and Luo himself, who are all masters in different areas including ink-wash, oil painting and pen sketch. 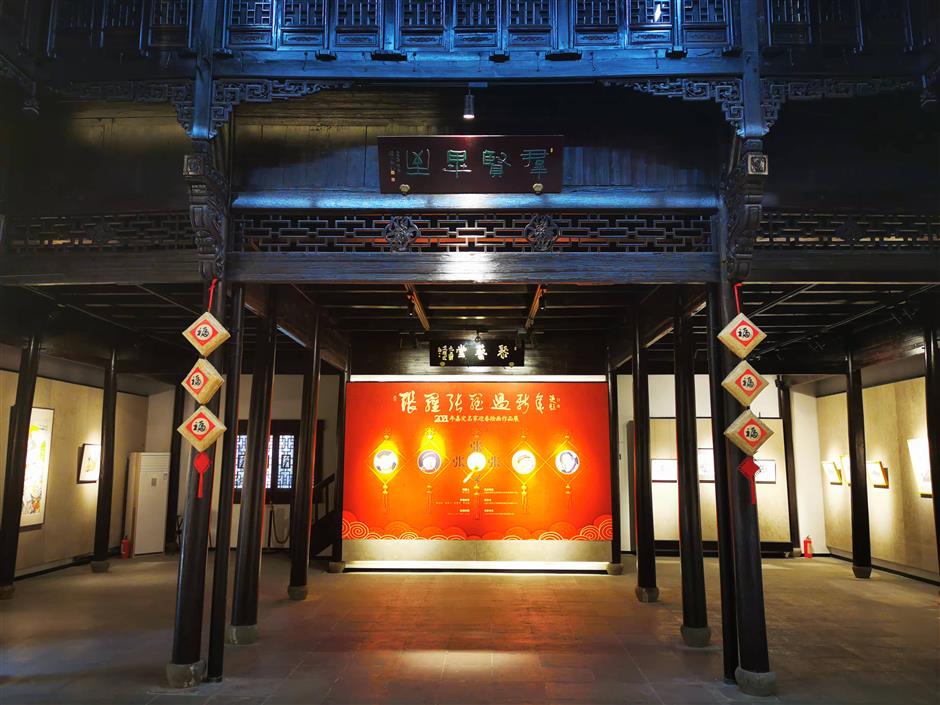 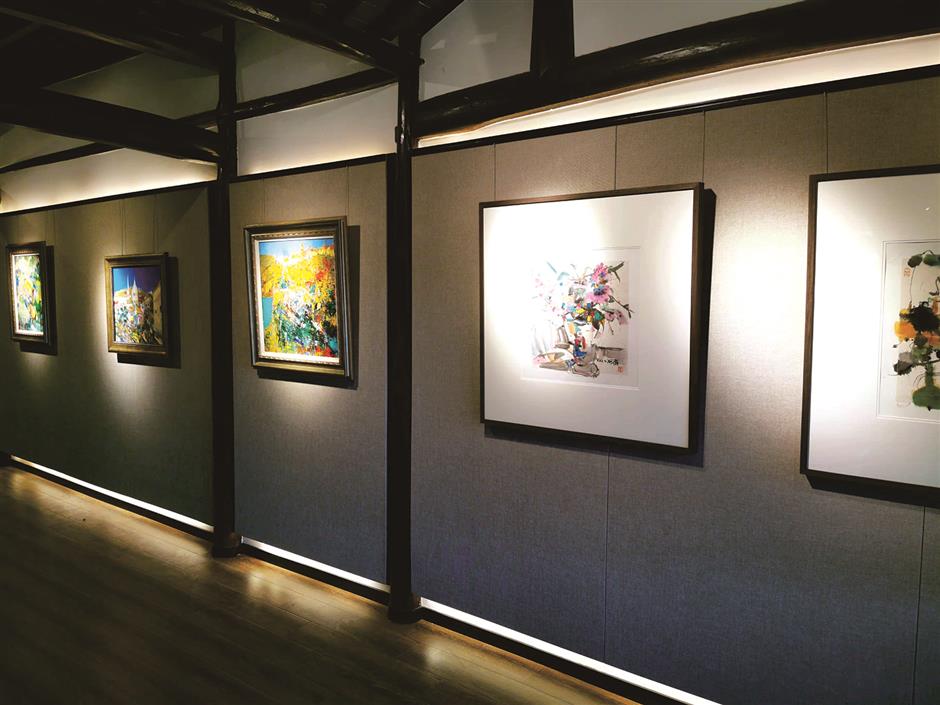 Paintings on display at “Zhang Luo Zhang Luo for the Chinese New Year” exhibition organized by Luo Weimin at the Nanxiang Painting and Art Creative Center. The exhibition will go through February 20.

As curator of the creative center which was launched three years ago, Luo aims to provide a platform for artists, especially for those who are young, to create art and look for inspiration.

“As far as I know, most of the young artists have difficulty finding such a large space for creation and developing their talent, so I decided to offer them this place as a workshop for free, releasing their financial burden while helping them shine in the art field,” said Luo.

Although busy operating the art center, Luo never stops painting. Last year, together with other artists, he headed to Taihang Mountain in Shanxi Province to seek inspiration. Afterward, an exhibition to display the work attracted thousands of visitors.

Before they came to the mountain, they imagined a rural area that was poor and brought their own food in case there was nothing to eat. But it turned out that new expressway and roads had been built, and the local people were even offering to cook for them. These lovely people and the beautiful scenery were all recorded on canvas and rice paper.

The exhibition was not only to show what they saw, but a reflection of what they had experienced, the true landscape of Taihang Mountain. They took what they saw back to the city and told those who didn’t know about the changes, which was the reason why Luo held the exhibition.

Innovation is another trait of Luo, and he has transferred this idea into his paintings. For example, he preferred painting new landscapes such as Bailian Outlets Plaza in Qingpu District and the North Bund in Hongkou District to the exotic building clusters on the Bund. The buildings along the North Bund have walls made of glass which increased the difficulty of painting. 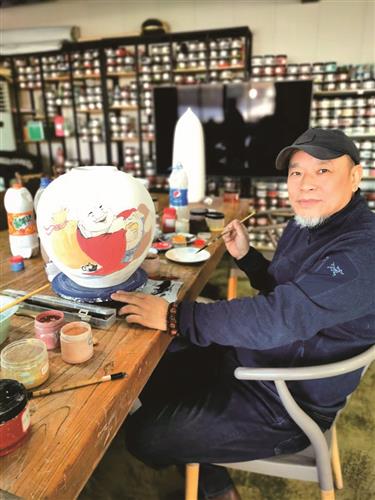 Luo paints a buddha on a pottery piece with piles of bottles of pigments on the table and shelves at the creative center.

“Innovation is, on one hand, a cultivation of self-growth, and on the other hand, can light up people’s lives, which is one of my life goals. But it doesn’t mean I will abandon the tradition,” said Luo. “Xu Beihong (1895-1953) and Liu Haisu (1896-1994), two renowned painters throughout Chinese art history, went abroad to learn Western painting skills, and then they combined the Western and Chinese styles together to create a new art form which brightened people’s eyes.”

Luo added: “We saw many breakthroughs in technology and culture, and art also needs innovation. Inheriting from the past is vital, but with no innovation, it will stop developing. We all know impressionist artists such as Vincent van Gogh, Claude Monet and Pierre-Auguste Renoir made a breakthrough, creating a brand-new painting form. And now, I hope to make some contribution to innovate in modern times.”

Although Luo isn’t a Jiading native, he fell in love with Nanxiang Town when he took part in the Nanxiang Xiaolong Culture Festival 10 years ago and visited Tanyuan Garden afterward. Now, he has moved his home from Hongkou District to Nanxiang.

The location of the art center, Cheng’s Garden, had five of 18 special landscapes in Nanxiang, which are relished by local people, while the Hengli River, the mother river of Nanxiang Town, passes through the garden.

“When we mention Jiading, it reminds us of jiaohua Jiading which means educational Jiading as this place has kept upholding the idea of a good education with many great scholars born here throughout ancient times. This land and its culture are rooted and sprouted in Nanxiang.”

Exhibitions at the Nanxiang center will be updated once a month.The first exhibition was “Painting in Nanxiang,” followed by “Colors of Taihang Mountain” and “Jiading Expression.”The “Zhang Luo” exhibition has been postponed due to COVID-19.

“When I was a kid, residents would gather at the center plaza, beating gongs and sounding drums to drive away evil and celebrate the Spring Festival,” said Luo. “I wish that the ‘Zhang Luo’ exhibition can not only provide a cultural and art feast for society, but also inspire people to win the battle against the novel coronavirus.”

The creative center plans to host more seminars for scholars and lectures for residents, and Luo showed visitors around, telling stories behind the paintings early this month. 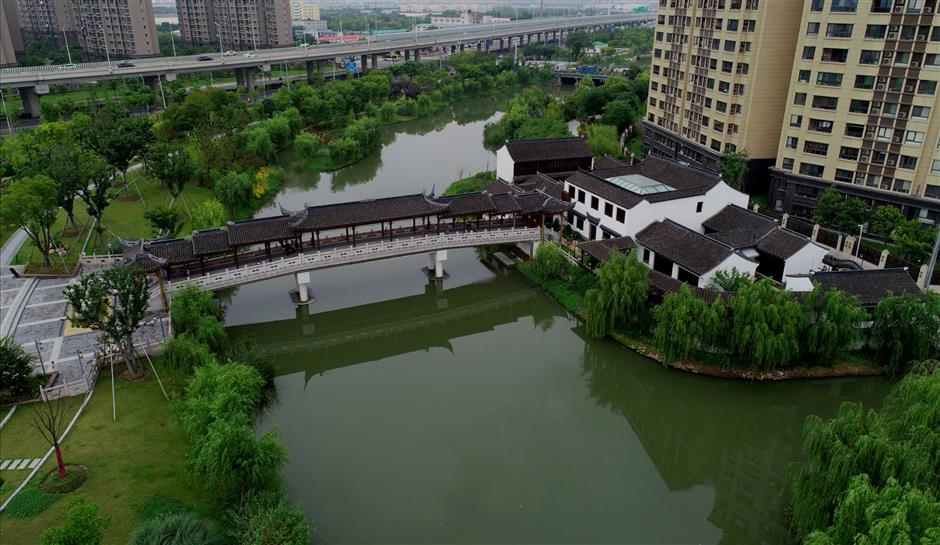 “It’s so nice that the curator comes to share with the information and knowledge, which makes my trip more meaningful,” said a visitor surnamed Xu.

To undertake his responsibilities to society, Luo organized a team to give art lessons for local students in Nanhua County in southwestern China’s Yunnan Province several years ago. Instead of teaching in the classroom, he took children out and taught them how to portray the landscape.

“They didn’t realize how fabulous their hometown is with mountains and rivers that people in cities are longing for. I wanted to lead them to find and enjoy the beauty of their hometown, broadening their minds, cultivating the ability of aesthetic appreciation of art and helping build up confidence in their own culture,” Luo recalled.

All the students were excited and earnest in their endeavor to record wonderful views of their hometown. Luo also sent them sets of oil painting sticks.

Apart from teaching students, Luo focused more on teachers, as the old saying goes that “teachers must teach a man to fish instead of giving him the fish.”

“With the limited time there, it was more important to bring the advanced ideas to teachers, so that they can spread the knowledge to their students like the galsang flowers blooming all over the mountain,” Luo said. “There are still obstacles slowing the development of the economy, medical treatment and education, but art and culture can raise the confidence of them.”

Luo says that he will continue to devote himself to developing the creation center and promoting art education.

He also hopes people can come to the center, enjoy the show and go back home full of knowledge.