Capturing the sound of the historic city of Suzhou

Most special memories can remain totally hidden from our conscious mind. However, when such moments of our memories are activated by sound, the past becomes alive.

Initiated by Buda, director of the museum, the exhibition uses a “Native Soundscape” as a starting point to study the city of Suzhou, home to a number of impressive historical sites and classical gardens.

In preparation for the project, around 40 musicians, artists, writers, designers, architects, dramatists, researchers and anthropologists from across China participated in workshop lectures, seminars and field recordings in Suzhou.

Thirty works have been showcased so far, including the recording of Suzhou’s historical landmark sound — the Hanshan (Cold Mountain) Temple bell tolls.

The poem “A Night Mooring near Maple Bridge,” by Zhang Ji, a poet of the Tang Dynasty (AD 618-907), features the night bell tolls of the Hanshan Temple. It is one of the best-known poems in China, as it perfectly captures a moment of consciousness.

The poet is woken from a troubled sleep. He is in a boat, moored on a canal in Suzhou, by a small bridge named Maple Bridge, and he hears the midnight bell tolling from Hanshan Temple.

Since then, the temple became famous, especially for its bell-tolling ceremony and Buddhism culture. Every year on New Year’s Eve, Hanshan Temple bell is struck 108 times, to symbolically awaken us from our delusions while the last strike ushers in a new year.

“This project is similar to a field study that records not only obvious sounds of Suzhou but sounds that have long been ignored in our daily life,” said Buda. “Sometimes what you hear stays longer in your mind than what you see. We hope to use these sounds to connect Suzhou’s past and present.”

On entering the exhibition hall, visitors see the work titled “TING” by Ding Min. The watch has been deprived of its hour and minute hands, but Ding has created a timepiece that still conveys the sense of time passing, aurally, as much as a watch with its visual indication.

“Everyone is sightless in front of time, which could only be seen when one forgets what it is,” Ding said.

“‘F’ to Bill,” by Gwendoline Cho-ning Kam, is an installation that primarily features bangu, the lead percussive instrument in Kunqu Opera — originated in Kunshan of Suzhou, and its copper associates, like big gongs, cymbals and small gongs. With the bangu connected to a modern “loudspeaker,” which is transparent and muted, the installation symbolizes predicaments that Kunqu luogu (Chinese percussion ensemble) encounters in social dynamics where spectacle is in favor. 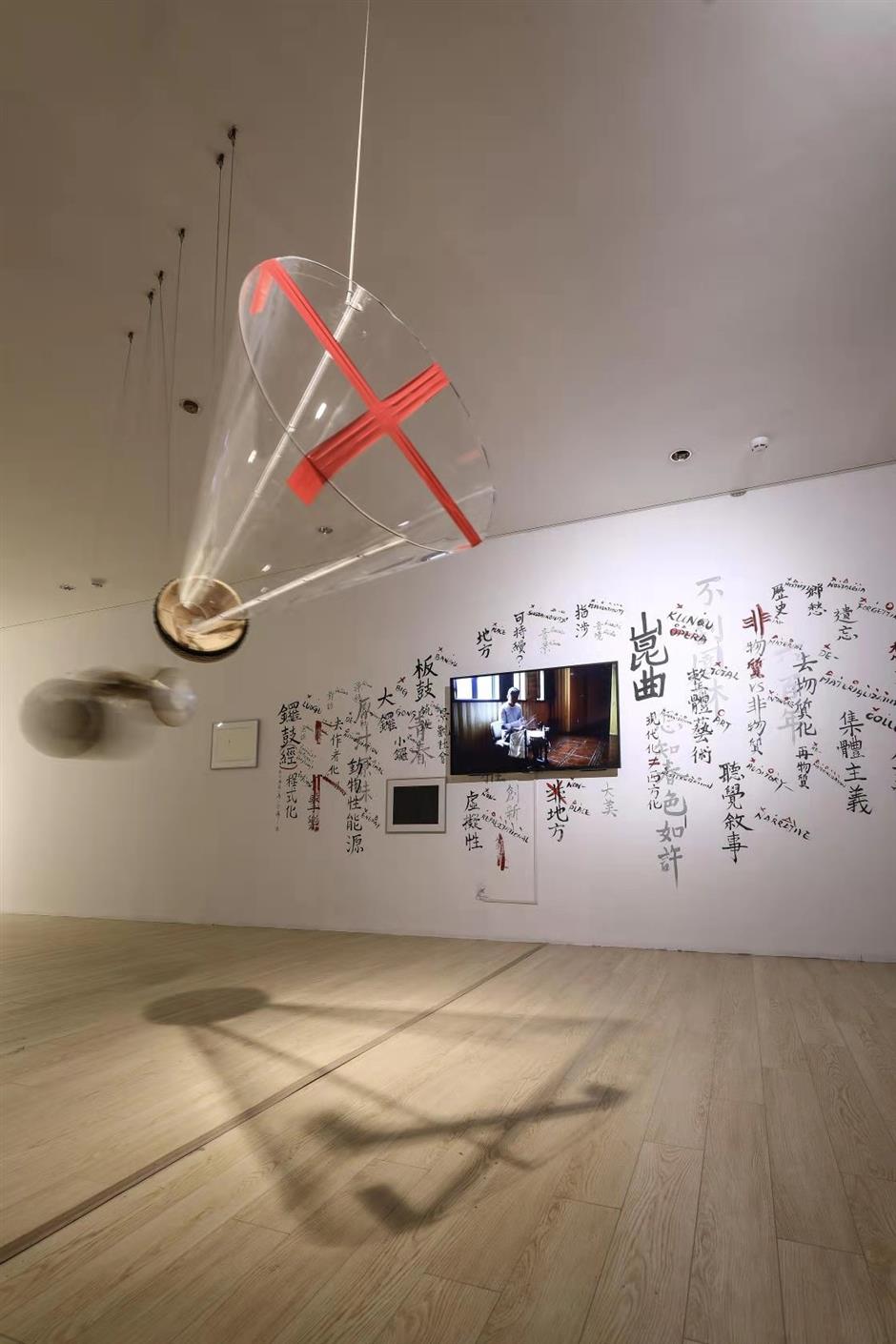 The highlight of the exhibition goes to an installation called “Traveling Without Moving, or A Dreamy Trip” by Chang Lan and Liu Beining.

Chang has just moved to Suzhou’s Pingjiang District, a historical urban area that has undergone significant conservation since 2017. She sent her daily field recordings of Suzhou to Liu, her painter friend in Hangzhou, Zhejiang Province, who visualizes those sounds in ink and color painting on papers based on his imagination.

The sound and pictures are projected respectively on a wall screen and two awning boats, with beanbags placed on site as seats for the audience to experience the audio and visual parts of the installation.

The interactions between Liu and Chang in different cities have turned a poetic Chinese saying of “going to Suzhou” — an overnight boat journey through the Grand Canal in the Yangze River Delta — into a slow experience of an era long gone, when high-speed trains were yet to be introduced. 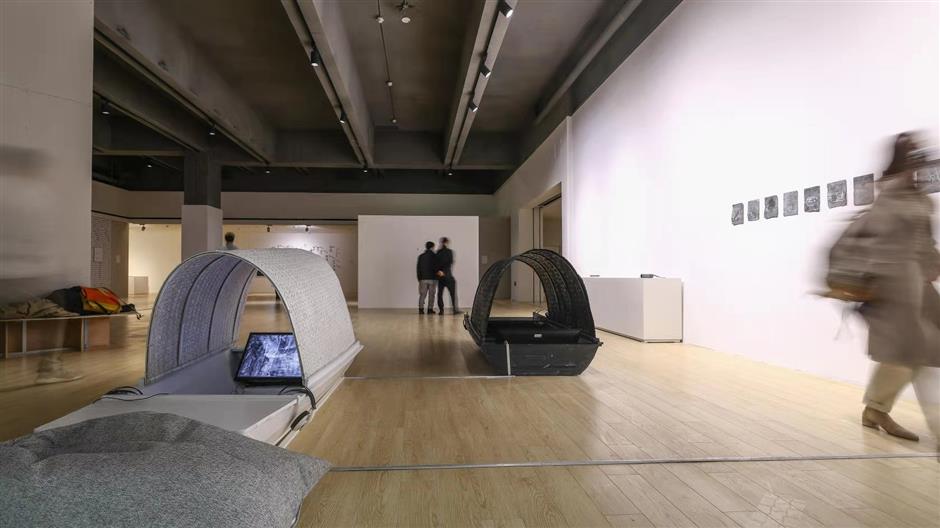 “Traveling Without Moving, or A Dreamy Trip” by Chang Lan and Liu Beining

Artist Liu Xiao took one minute’s recording every day in present day Suzhou for 365 days from May 16, 2018 to May 15, 2019. Every “one minute” was the most representative sound of the day according to his distinct subjective judgment: sometimes interesting, sometimes fresh, sometimes critical and sometimes unforgettable.

Each “one minute” took an average of 10 minutes to edit, according to Liu, who said he had made it a routine in his life before going to bed every night during that year. With every “new minute” gained, 10 minutes were lost instead. Through this one-year recording action, the artist would like to engage a discussion with the visitors on “existence” in a relationship between time and space.

Obviously, sound is not the only media at the exhibition.

The “Archiving Suzhou” suggests that the visitors take their time, quietly read the words in each folder, and listen to the related field recordings and find the recording sites on the map marked with push pins.

The pop-up archive managed by Li Yiman includes nearly 40 personal writings and nine individual recordings collected through an open call, which capture street scenes of people and their interactions within their environment across time and space.

“I am sure that this is not the kind of exhibition that you are familiar with,” said Buda. “The participants are different, the works are different, and of course the circumstances that demand critical thinking vary from person to person.”