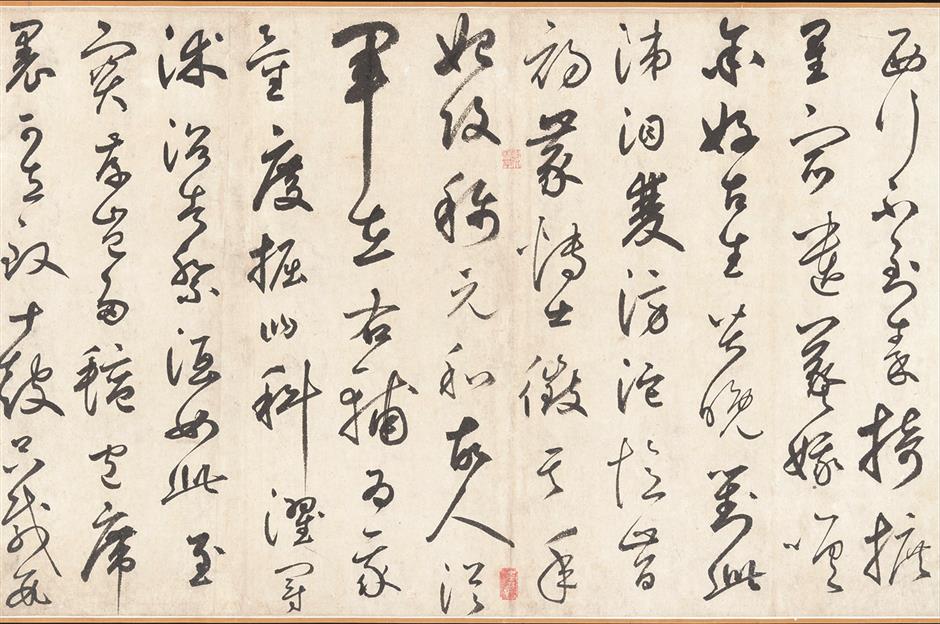 One of Xianyu Shu’s scrolls of writing of Han Yu’s “The Song of the Stone Drums” in cursive style is on display at the Metropolitan Museum of Art in New York City.

Xianyu Shu (1246-1302), also known as Boji and pseudonym Kunxue Shanmin (a poor mountain scholar), was a notable poet, collector, connoisseur and calligrapher of the Yuan Dynasty (1271-1368).

Historical records prove that many people with the compound surname enjoyed prominent fame and literal intelligence and Xianyu was an exemplar.

The master was born in today’s Henan Province and moved south at the age of 30. Excelling in running and cursive styles in calligraphy, Xianyu preferred to use stiff brushes and was considered the founder of the “hanging arm technique,” a writing posture with the wrist, elbow and arm hanging in the air, which provided more freedom of motion for experienced calligraphers.

His closest friend, Zhao Mengfu (1254-1322), a scholar, painter and calligrapher, who had enormous significance in Chinese art history, acknowledged his talent and superiority in cursive writing.

“Boji and I learned cursive script together,” Zhao wrote in one of his books on Chinese calligraphy. “He surpassed me to a great extent. Even though I really tried my best, I could not catch up. It is only after he passed away that people started recognizing my calligraphy.”

The two provided leadership toward creating innovative interpretations of the ancient calligraphy styles. During the Yuan Dynasty, the regular and cursive styles became more sophisticated and advanced.

One work in particular, from his 40 masterpieces, is considered to have had the most profound influence on the cursive writing art. It is Xianyu’s transcription of “The Song of the Stone Drums,” composed by Han Yu (AD 768-824), who ranked first among the “Eight Great Prose Masters in the Tang Dynasty (AD 618-907) and Song Dynasty (960-1279).”

The powerful and vigorous brush strokes in Xianyu’s writing display the energy and spiritual freedom, as well as showing the essence and sophistication he acquired through his study of former masters.

The stone drums inscribed with poetry, dating back more than 2,300 years to the pre-Qin era (2100-221 BC), are the earliest known stone-carved Chinese texts in seal script that describes activities such as fishing, hunting and warfare.

The 10 stone drums, which provided inspiration for many calligraphers, are listed as one of the top 9 national treasures in China.

In Han’s tribute to the stone drums, the author eulogized the outstanding calligraphy on the drums and its historical importance.

Seeking to persuade the Tang Dynasty government to move the stone drums to a safer location, Han pointed out the signs of fading and wear, and urged the imperial academy to study and preserve the characters carved on the surface of the drums. In AD 814, only nine of the original 10 drums were retrieved, and in the late Tang Dynasty, the area where the drums were safeguarded became a battle field.

Luckily, the tenth was rediscovered in 1023 during the reign of Emperor Renzong of the Song Dynasty (1010-1063), who at that time encouraged his officials not only to produce great art and literature, but also preserve what had been made by previous generations. After reading Han’s poetry about the stone drums, the emperor issued an edict to conduct a search for the lost piece and the last drum was finally brought back.

Xianyu was also an antiquarian and skilled at playing the guqin (an ancient Chinese seven-string instrument), music composition and painting.

The versatile master felt connected with Han out of his eagerness and determination to protect cultural relics, thus transcribed “The Song of the Stone Drums” and cherished it not only as precious but as sacred.

Following more than 2,000 years of turmoil and social changes, the stone drums are now kept at the Palace Museum in Beijing, where visitors can take a journey through time and space to discover the fascinating facts about China’s history, culture, customs and traditions.

Two versions of Xianyu’s writing of Han Yu’s “The Song of the Stone Drums” have been passed down. One of them was written in his prime years and considered a perfect version. It was sold for 46.2 million yuan (US$7.15 million) in a Beijing auction in 2004.

The other one, written in 1301, is currently on display at the Metropolitan Museum of Art in New York City.