Porcelain made during the Song Dynasty (960-1279) was considered the best ever produced. At the time, productivity and kiln numbers were at their heyday in China.

When the Southern Song Dynasty (1127-1279) moved its capital to Hangzhou, the royal court established Guan Kiln in the city and produced porcelain exclusively for the imperial family. Porcelain made by the Ge Kiln in southern China also found favor with Song people by virtue of its minimalist style.

In modern times, the Ye’s family, from Yunhe County in Zhejiang Province, has emulated craftsmanship from the Guan and Ge kilns to carry on the century-old cultural heritage. 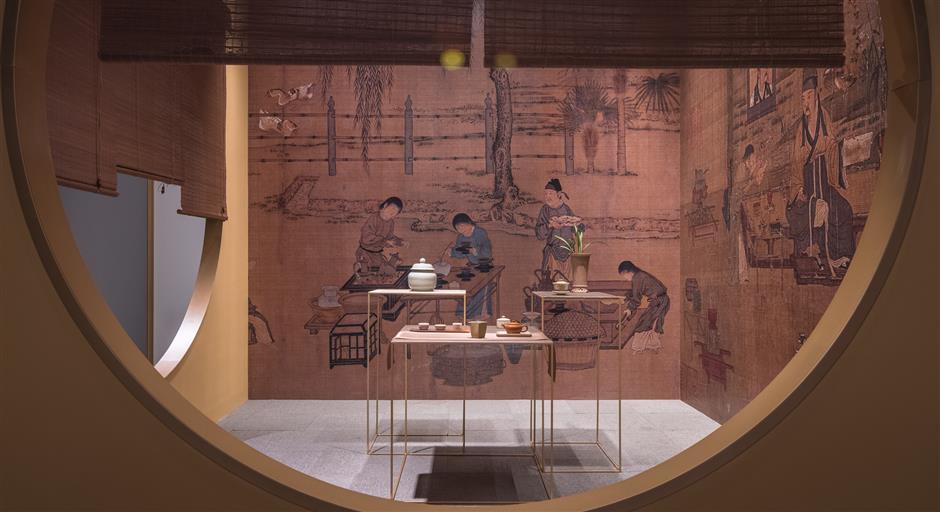 A series of tea vessels are on display to show how Song Dynasty people drank tea. It included a series of procedures and particular ways of using vessels.

Ye was inspired by porcelain made in the Song Dynasty and added modern aesthetics to create more than 200 vibrant pieces representing the new era.

The Song Dynasty gave priority to the humanities, turning to people’s inner emotions and a minimalist art style, evident in many pieces of pottery from the era. Muted shades and quiet simplicity are the main features of ceramics made during that period. They combined characteristics from celadon in southern China and white porcelain in northern China and have been compared with jade because of the similar texture and finish.

However, replicating the ancient craftsmanship is not simple. Ye and his father Ye Dekui spent years researching and learning the firing techniques. Today, the vessels made by the Ye family are considered by connoisseurs the best among modern-day replicated works.

In 1996, archeologists discovered the relics of ancient Ge Kiln in Hangzhou. To restore their original appearance, Hangzhou Archeology Institute summoned the Ye family to replicate the unearthed antiques, some of which are displayed in the exhibition.

The curator uses a ink-wash painting to match with the vessel, capturing the imagery from that period.

The exhibition divides his works according to four popular activities of Song Dynasty scholars — incense burning, tea drinking, flower arranging and calligraphy writing. Ancient-style ink-wash paintings are matched with the vessels, capturing imagery from that period.

Burning incense has long been considered conducive to creating a tranquil environment and refreshing the mind. The practice reached its zenith during the Song Dynasty when it was part of the literati’s lifestyle. They burned incense while reading, playing guqin (an ancient Chinese seven-string instrument), writing calligraphy and during religious rituals.

Dedicated incense materials were imported from other countries, and craftspeople in the country began producing exquisite ceramic censers.

The exhibition displays a censer designed with two fish-shaped handles. Fish is an auspicious pattern that symbolizes fortune and longevity. This particular elegant piece has a sense of pureness, featuring classic Song Dynasty minimalist style. 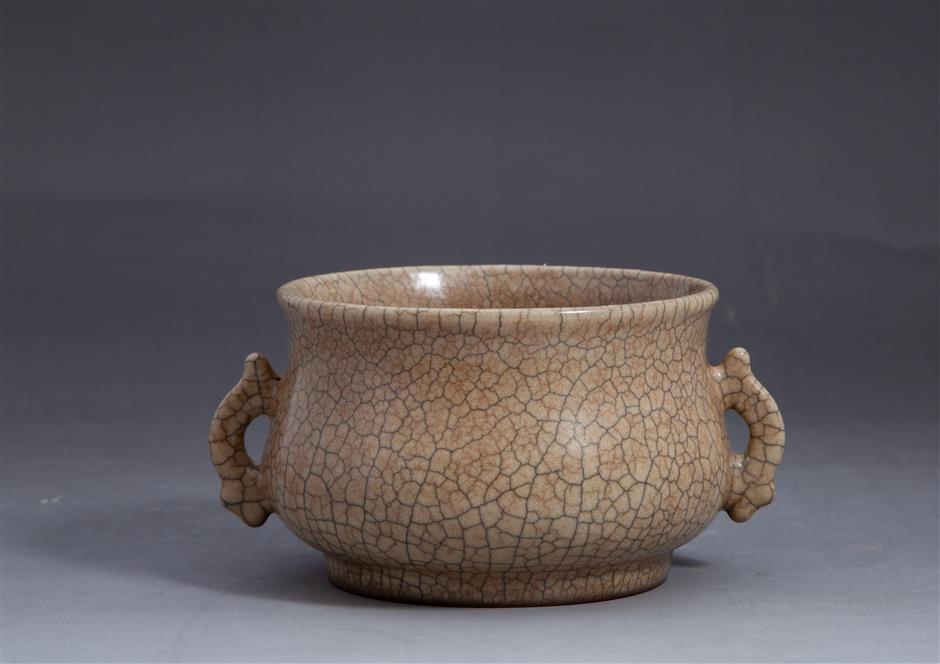 A censer designed with two fish-shaped handles is on display. Fish is an auspicious pattern that symbolizes fortune and longevity. This particular elegant piece has a sense of pureness, featuring classic Song Dynasty minimalist style.

During that period, craftspeople fired daily-use vessels and containers for flowers, because scholars and literatus practiced flower arranging and bonsai planting. 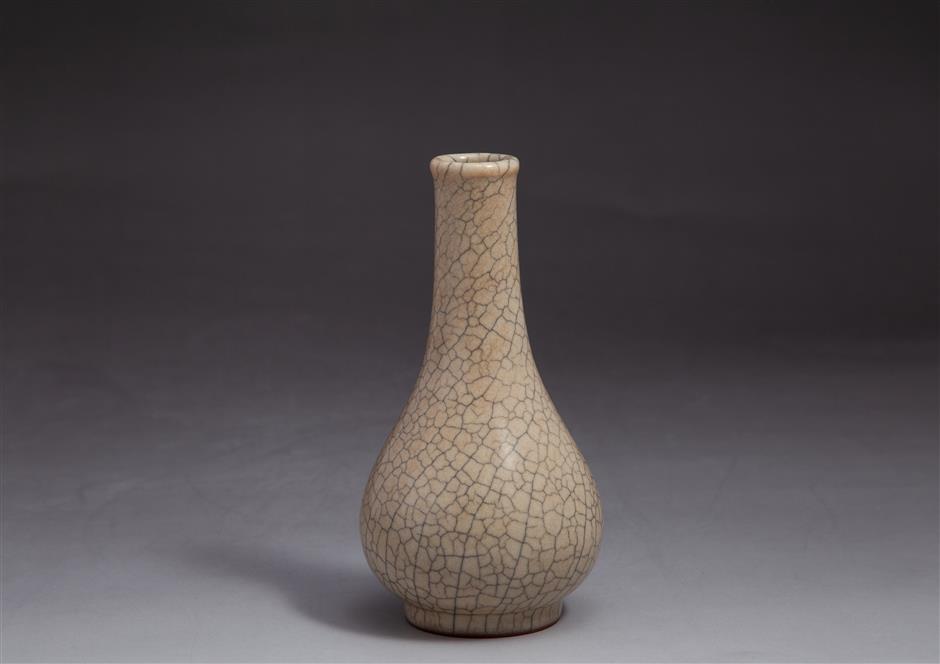 As a performance on important occasions, tea ceremonies deeply influenced the Chinese tea-drinking tradition. When Song people drank tea, it included a series of procedures and particular ways of using vessels. The exhibition showcases a series of tea vessels that imitated containers from Ge Kiln. The last section displays items related to calligraphy writing and painting. Inkstone, writing brush, traditional rice paper and inkstick are the famous “four treasures of the study” in Chinese calligraphy.

However, modern people often miss out on two important utensils — the brush-washing bowl and water-adding bottle. When ancient scholars wrote and painted, they washed brush pens in the bowls and then dipped them in new ink or pigments. When they grinded an inkstick on an inkstone, they added water to make ideal shades.

Ye designed a brush-washing bowl in the shape of flower and a water-adding bottle with a melon shape. Their smooth lines and jade-like textures speak to Ye’s superb skills. 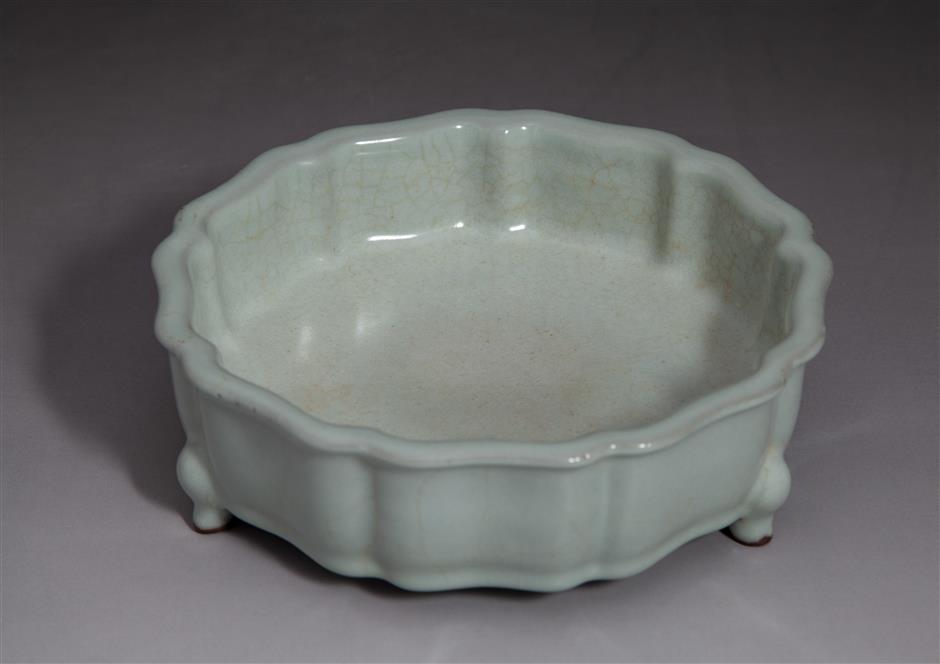 Date: Through March 28 (closed on Mondays)