The opera “Fifteen Strings of Coins,” created by the playwright Zhu Suchen during the early Qing Dynasty (1644-1911), is a story of coincidences and mistaken circumstances.

It tells the tale of the Xiong brothers of Suzhou in Jiangsu Province, who were both sentenced to death for two separate but wrongful convictions.

On the night before their executions, Suzhou Prefecture Chief Kuang Zhong dreams that two bears come to beg for justice. Because xiong in Chinese also means “bear,” he petitions for retrials of the two cases to redress the wrongs done to the brothers.

The tale is told in two independent storylines that intertwine.

The first plot relates to the younger brother Xiong Youhui, a poor scholar studying at home. His neighbor Feng Yuwu, a rich businessman with an ugly face and rude manners, always suspects his beautiful wife Hou Sangu of having an affair with Xiong.

One day Feng gives Hou 15 strings of coins and a pair of gold earrings, and tells her to take good care of them. At that moment, the voice of Xiong is heard from the other side of the wall, reading loudly. The wife proclaims him “a diligent man,” which greatly sharpens the husband’s suspicions.

One night, a rat finds the money and the earrings in Feng’s house, and carries them to the Xiong’s room. The next morning when the scholar rises, he is surprised to see such a treasure. Without thinking too much, he takes the earrings to Feng’s shop to barter for some rice.

On the way home, he also buys some rat poison and cooks it into a pancake to kill the vermin. He puts it outside.

Feng recognizes the earrings when he later checks the accounts of his shop assistant. Thinking he has finally found evidence of adultery, he rushes home in the heat of anger, where he finds and eats the poisoned pancake.

Feng’s survivors accuse the wife and neighbor of murder and adultery.

The judge, fatuous and incompetent, sentences the pair to death and orders Xiong to hand in the 15 strings of coins. His elder brother Xiong Youlan, who was away doing business in another city, runs back home with the money when he hears of his brother’s arrest.

The story’s second line then develops with Youlan.

The butcher You Hulu, an alcoholic, has borrowed the 15 strings of coins to buy liquor. He comes home drunk and jokes with his stepdaughter Su Shujuan that he is going to sell her and shows her the coins, which he says are a deposit on the sale. 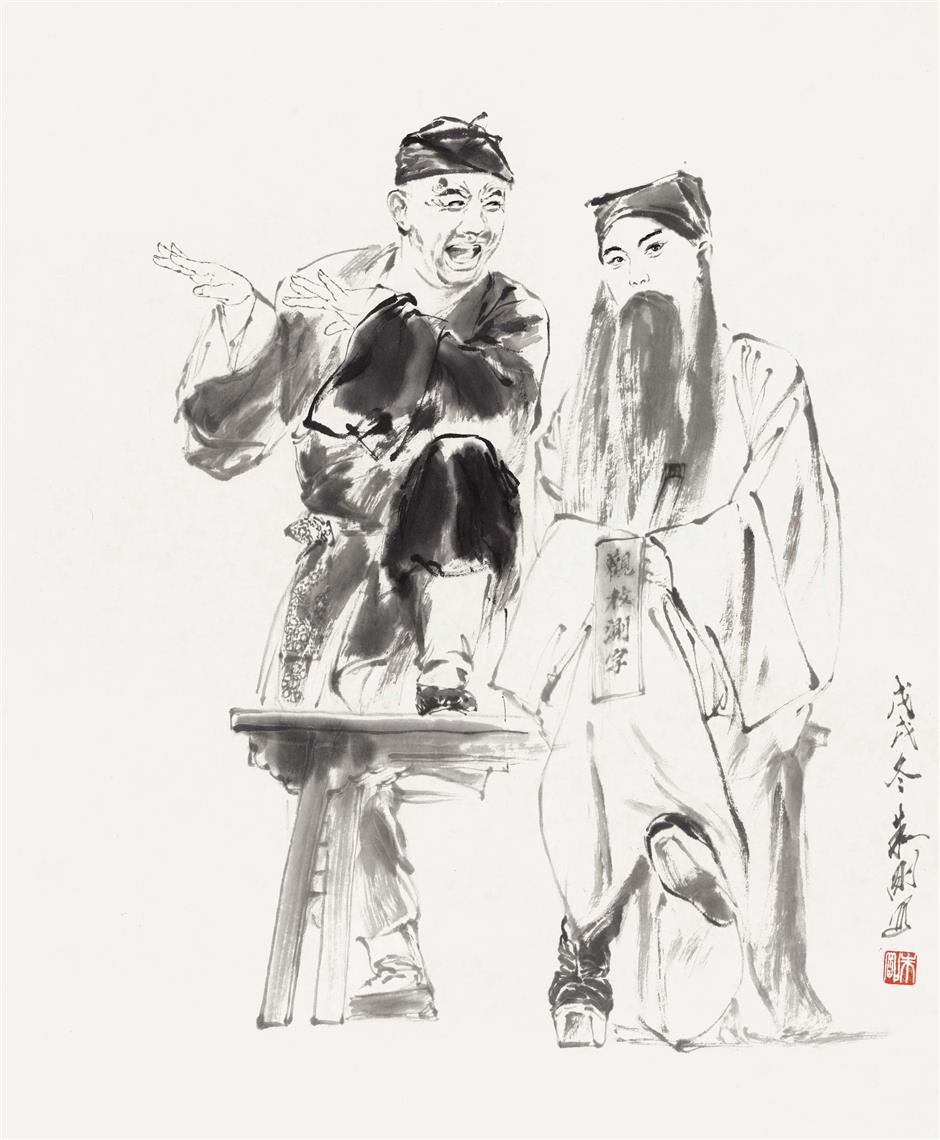 Frightened of becoming a slave, the girl escapes in the night. In her hurry, she forgets to lock the front door.

The thief Lou Ashu (shu in Chinese also means “rat”) sneaks into the house. Seeing You is asleep, he attempts to steal the coins from under the butcher’s pillow. You wakes up, and a fight ensues. The thief, in a panic, chops the butcher to death with an axe and flees with the coins.

The following morning, the neighbors find the butcher lying in a pool of blood, with the money and stepdaughter gone. They call the police.

Coincidentally, the girl runs into the brother Youlan in her flight from home. Youlan, a kind-hearted man, escorts her to a village where her aunt lives. When they arrive, the police are there. In a body search, the police find the money that Youlan was carrying on his way to save his brother.

The thief Lou, who is also in the crowd of onlookers, shouts that they murdered the butcher and stole the money.

“Arrest them!” he shouts.

Su and Youlan are sentenced to death by the local governor.

Prefecture Chief Kuang — after the dream of the two bears who beg for justice, each carrying a rat in its mouth — decides to go through the two case files again and finds questionable points. He decides to reinvestigate the cases.

The painter Zhu Gang depicts the scene when Kuang turns his suspicions on the thief Lou, who is praying in a temple. Kuang disguises himself as a fortune teller and tries to coerce Lou into telling the truth.

Under Zhu’s brushes, the two images are vivid and sharp in contrast. The upright officer of the law shows his cleverness, while fear on the thief’s face betrays his attempt to appear calm and confident.