Precious ancient seals have a human story to tell

A grand seals exhibition at Shanghai Han Tianheng Art Museum tells the story of their history and development. The display not only has seals, albums and materials collected by the museum but has also borrowed 580 items from the Xiling Seal Engraver’s Society and Henan Seal Society, both renowned seal societies in China, and private collectors at home and abroad. More than 70 percent of the exhibits are being seen in public for the first time in this feast of China’s seal culture.

Seals have accompanied human development and were important tokens or certificates during social communication. Apart from their practical use, China’s seals have value as art. The first seal in China was thought to have been made 3,000 years ago in the Shang Dynasty (16th-11th centuries BC).

Before Emperor Qingshihuang in the Qin Dynasty (221-206 BC) unified the country, all the seals were called xi (玺) and varied from kingdom to kingdom, not only in shape and size, but also the characters on it. Xi was officially used for royal families only after the establishment of Qin, while officials and residents could only use yin (印) or zhang (章).

One highlight of the exhibition is a seal made of gold during the Three Kingdoms Period (AD 220-280) with a tortoise on top. In ancient times, there was a strict rule of seal usage as seals represented the dignity of a man, and only high-level officials could use one. 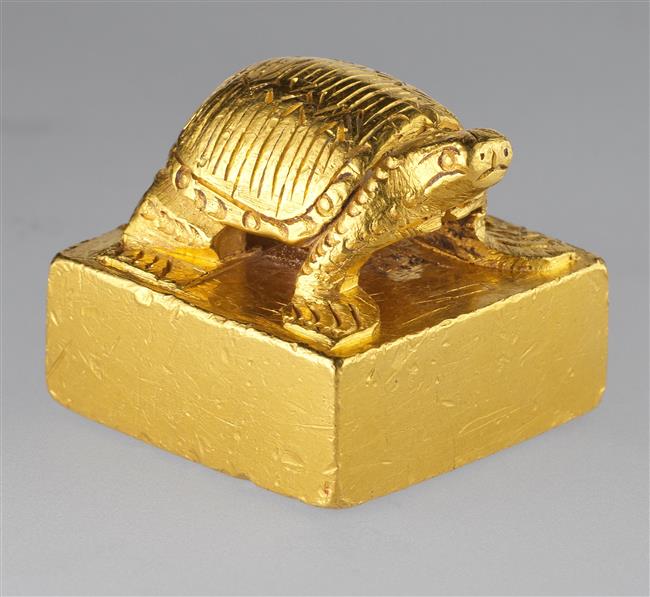 A gold seal with a tortoise on top is made during the Three Kingdoms Period (AD 220-280) and represents the dignity of its owner.

After paper was widely used in the Southern and Northern Dynasties (AD 420-581), seals were used more often on paper rather than bamboo or wood slips, which gave birth to the inkpad and drove the development of seal.

With scholars blooming during the mid- and late Ming Dynasty (1368-1644), another peak of seal cutting in the Ming and Qing dynasties was formed.

The seals were practical in the past, but no longer had that function in the mid-Ming Dynasty after scholars could make a seal of their own instead of asking professionals to make one. Since then, seals weren’t limited to owners’ names, but included poems to express self-ambition as well. Such trends passed down to the Qing Dynasty with a variety of styles popping up, reaching another peak of Chinese seal-cutting.

On display are 116 seals made during the period, covering artists including Wen Peng, He Zhen, Deng Shiru, Wu Xizai and Wu Changshuo.

Wen and He were called the founders of Ming and Qing seal-carving. A story recorded by Zhou Lianggong, an expert of seals in the Qing Dynasty, tells that Wen, the eldest son of master painter Wen Zhengming (1470-1559), was intrigued by stones carried by an old farmer, so asked where they came from. The farmer said they were from Chuzhou (today’s Qingtian County in Zhejiang Province) and used as hair decorations for women because of their soft texture.

Wen spent a great amount of money buying stones to take back home so he could carve his own instead of asking a craftsman to do the work.

Only two seals made by Wen have been passed down, making them even more precious.

Another highlight was a seal made by He, a professional seal carver who had a wide influence at that time. There was a saying that every resident was proud to have a seal made by He. The one on display records the love story between Wang Zhideng and Ma Xianglan.

Also on display is a seal created by Deng Shiru, founder of the Wan Style during the Ming and Qing dynasties. It looks ordinary, but the words carved on the body of the seal have a hidden secret, telling a story during the making process. Visitors are advised to take a close look at what Deng carved.

Seal albums are also featured in the exhibition. While seal-making is thriving, a group of scholars have sprung up to collect the prints. Their attention to traditional ancient xi promoted the emergence and development of seal prints. These seal albums not only have value for academic research, collecting and art, but are also an opportunity to learn.

During the reign of Emperor Longqing (1567-1572), Shanghainese Gu Congde collected seals made in the Qin and Han dynasties to make Gu’s Ancient Seal Album. It was a yuanda album which means a collection gathering paper with patterns affixed by seals. The album only issued 20 sets, which made it more valuable.

Apart from seals and albums, the material and their handling are another important aspects of the exhibition. 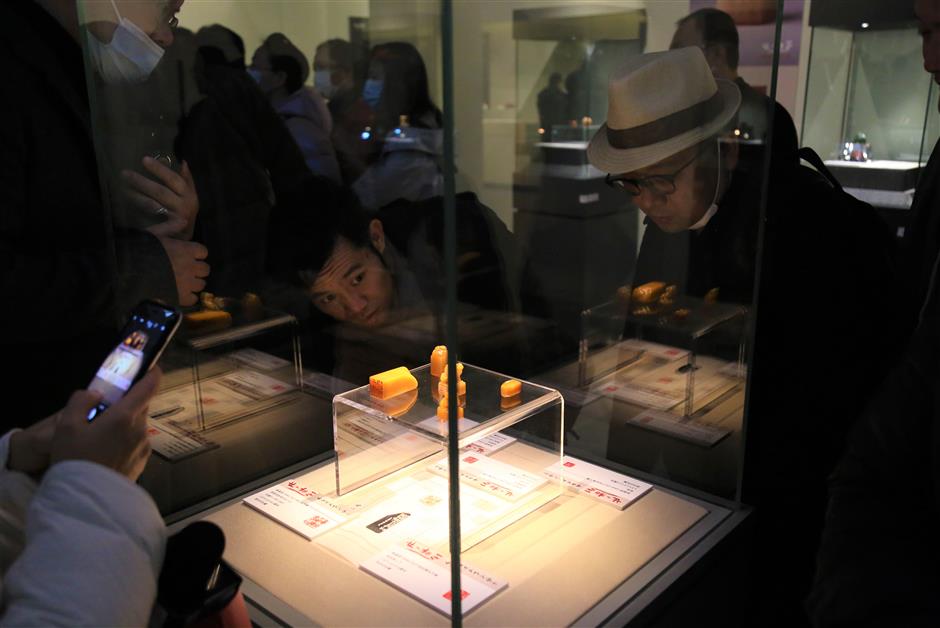 Date: Through March 30 (closed on Mondays)