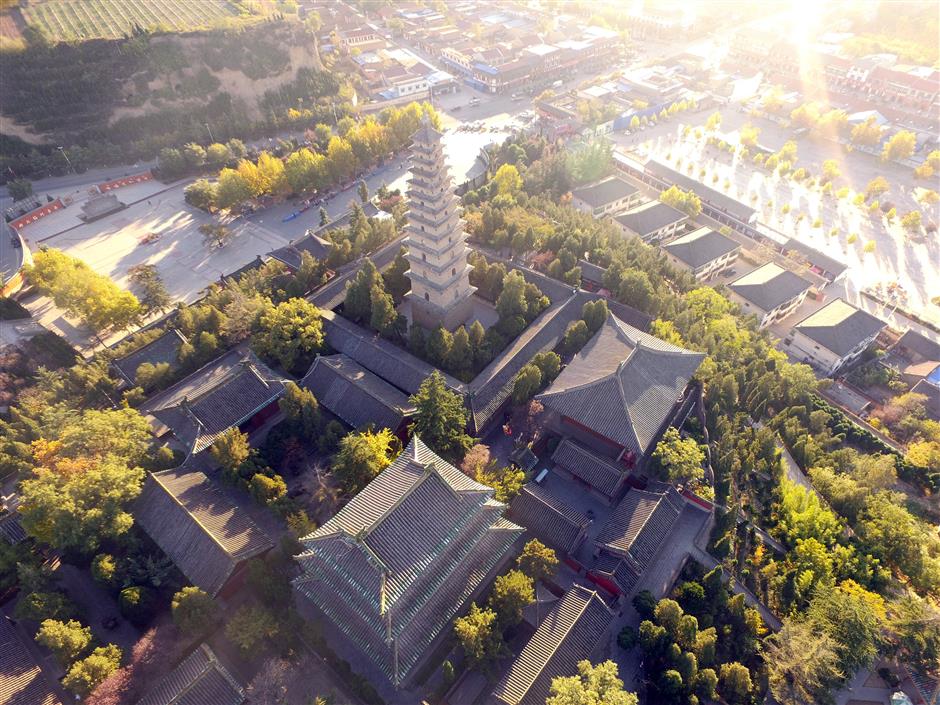 Pujiu Temple in Shanxi Province earns its reputation as a temple of love thanks to the ancient romantic play “Xixiang Ji” (“Romance of the Western Chamber”).

Pujiu Temple in Shanxi Province earns its reputation as a temple of love thanks to the ancient romantic play “Xixiang Ji” (“Romance of the Western Chamber”), written by Wang Shifu during the Yuan Dynasty (1271-1368). The play follows a young scholar named Zhang Sheng, and Cui Yingying, the daughter of a minister, who fall in love with each other following a chance meeting in the Pujiu Temple garden. Since then the temple has become a symbol of love for couples.

The Buddhist shrine was originally built in the Tang Dynasty (AD 618-907) and its Yingying Tower (named after Cui) is a real wonder in Chinese architecture.

If you stand about 20 meters away from the tower’s western side and clap your hands loudly you can hear sounds that resemble a frog croak resounding from the top of the construction. The temple echo fun is a big attraction to tourists, who also visit the tower to check out the sarira — Buddha’s relics.

The 40-meter-high, brick-laid tower was renovated in 1564 during Ming Dynasty (1368-1644), but it carries some distinctive Tang tower features — a square shape. Visitors can climb to the top through its meandering staircases and have a bird’s-eye view of the whole complex. Each floor was designed with four doors, but try not to bang your head because some doors are real and some are just there for a decorative purpose. In another renovation project in 1991, the bronze Buddha statues and donation certificates discovered in the “heavenly palace” (a Buddhist tower’s top floor) proved that the tower was reconstructed in the Ming era. And the mystery of the echoes that have been quacking for centuries was also unraveled at the same time by the experts from Chinese Academy of Sciences, Shanxi University, Heilongjiang University and Xi’an Jiao Tong University.

The location’s special topography, unique architectural structure and old building materials make the strange echoes. The tower was laid with grey bricks, one-by-one. As the width of each floor is not exactly the same, it forms a concave, which makes the sound waves change when they hit the eaves and the curved surface.

The sounds are then reflected, some weakened and some strengthened, on their way back to our ears. According to the oscillograph trace reader, the sound frequency is almost the same as a frog’s croak.

Science uncovered the secret, but locals prefer to believe the legend that it is blessed with wild imagination and good wishes. The legend said a giant golden frog in the nearby valley, which had three legs and spat coins, sent out the sounds.

For centuries, locals worshiped the frog as a god of wealth. Many constructions in the Pujiu Temple are associated with the romantic play “Xixiang Ji.” The magnificent bell tower, 17 meters tall, was turned into an observation platform in the story.

In the paly, a local military officer, Sun Feihu, heard that the minister’s beautiful daughter Cui was in the temple. He then led his 5,000 soldiers to besiege the temple in an attempt to seize the lady to be his wife.

In despair, Cui’s mother had to announce that anyone who could defeat Sun would win the hand of her daughter and a generous dowry. The scholar Zhang then wrote a letter to his friend general Bai Ma for help. Zhang invited Cui’s mother and the temple’s abbot and monks to go up to the bell tower to watch the general defeat Sun. Cui’s mother then backtracked on her promise and there were several trials and tribulations along the way before love eventually won the day and Zhang eventually married Cui.

Today, visitors can step onto the platform and imagine the story’s fierce fight scenario.

A giant love lock on the front square of the temple is another must-see for couples who long for pure love. On one side, it carves “May all the people in the world find true love,” and on the other side, it says “To bind two souls to eternity.”