“Peony Pavilion,” a play written by Shakespeare contemporary Tang Xianzu, went on to become one of the most enduring classics in the Chinese opera repertory.

It is lyrical tragicomedy of love and perseverance that transcends time and space, life and death.

Du Liniang, a beautiful young girl born into a wealthy, influential family in the last days of the Southern Song Dynasty (1127-1279), is shackled by feudal ethics and customs, denied the freedom to find love by herself.

One afternoon, Du takes a nap in the back garden. In a dream, the girl meets a young scholar holding a willow branch in his hand. He invites her to write a poem with him and leads her to the Peony Pavilion, where they eat forbidden fruit.

A flower petal drops on Du, awakening her in the garden. She realizes it was all a dream, but it seems so true to life that she hurries to the pavilion to see if the scholar is there. He is not. She pines for him day after day, finally becoming so ill that she dies.

Her father buries his daughter under a plum tree in the back garden, and builds a nunnery nearby, tended by an old nun.

Du’s soul descends into hell. The keeper of dead souls checks through his Book of Life and Death and finds her death was a mistake. Moreover, Du was destined to marry Liu Mengmei, a top scholar in the imperial examinations. Her soul is released back to the living world.

At the same time, the young scholar Liu is on his way to the capital to sit for the examination. He catches cold and seeks refuge at the backyard nunnery near the plum tree. There, Du’s soul meets the man she encountered in her dream. The couple falls in love.

Liu confides in the old nun, asking her to help him exhume Du’s grave to reunite her body and soul. Du comes back to life and follows Liu to the capital for the examination.

Liu comes out top in the exam, a certain guarantee of a high-ranking post in the imperial court. They return to Du’s home where Liu asks her father for her hand in marriage. Her father, however, refuses to believe that Du is still alive and says the young man must have been bewitched by a “devil.”

Hearing that his daughter’s grave has been dug up, the father flies into a rage and orders his men to tie the scholar up. The father writes a letter to the emperor, accusing the young man of being a devil and seeking his arrest.

The emperor holds court. Du is summoned to prove that she is indeed human. The emperor pardons Liu. In the end, the couple marry and live happily ever after.

The play written by Tang is a reflection on love, life and human nature. The playwright himself failed the imperial exam four times and refused to curry favor with influential officials. Settling for a low-level court position, he had personal experience with government malpractice and rigid social norms.

Disheartened, Tang retired in 1598 and returned to his hometown in Jiangxi Province, where he focused on writing plays. Living in seclusion in a small village, he listened to the tales of local farmers, enriching the creative sphere for his literary works.

That same year, he wrote “Peony Pavilion.” It was originally composed for staging as a Kunqu Opera, one of the genres of traditional Chinese theater arts. It was first performed in 1598 at the Pavilion of Prince Teng and became instantly popular.

The play, sometimes called the “Chinese Romeo and Juliet,” has 55 scenes, which can run for more than 22 hours on stage if presented in its entirety. The opera has been performed countless times in China and even abroad. It was adapted into a film and numerous modern versions.

The play’s focus on female consciousness was a rarity in Chinese literature more than 500 years ago. 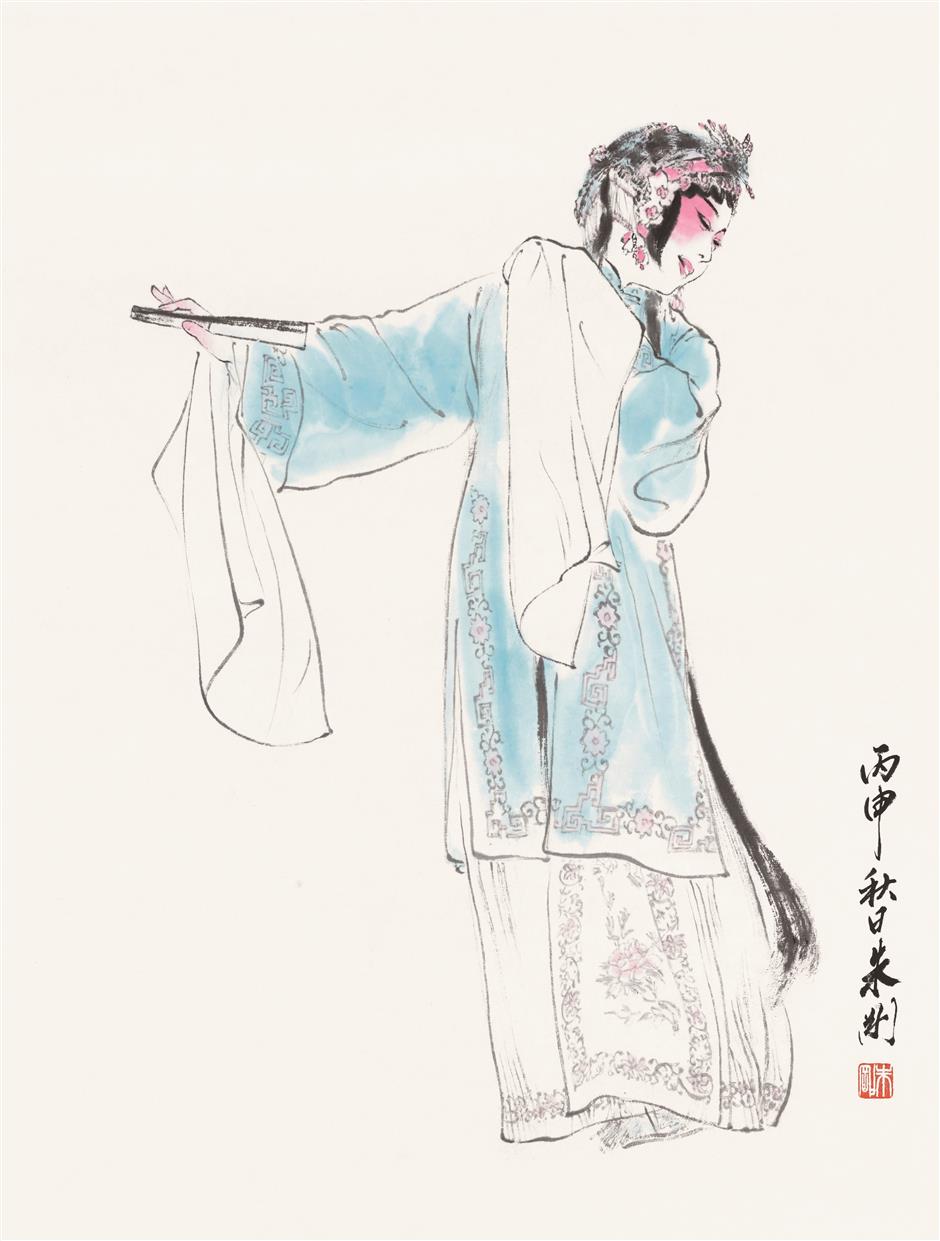 To flesh out the opera characters, painter Zhu Gang combines both the realism techniques of Western painting with freehand brushwork often used in Chinese art.

Zhu prefers meticulous lines and heavy colors, but at the same time, he uses the contrast of the wet and dry ink, different shades of colors and the use of exaggerated light.

Exaggeration and symbolism are part of freehand brushwork in Chinese painting.

The figures he paints have detailed faces that bring realism to them. However, clothing and postures are treated in freehand style, with clean-cut lines and large areas of colored ink rendering.

The painting “Du Liniang” is a typical embodiment of this style. The limbs and sleeves of her costume reflect flexibility and lightness, showing a beauty of movement to reflect her lovesickness when strolling in the garden.

The picture “Peony Pavilion” depicts the scene when Du and Liu meet secretly in the garden. The painter doesn’t draw any background environment, but the expression of their love suggests the young couple are basking in bright spring sunshine among blossoming flowers. 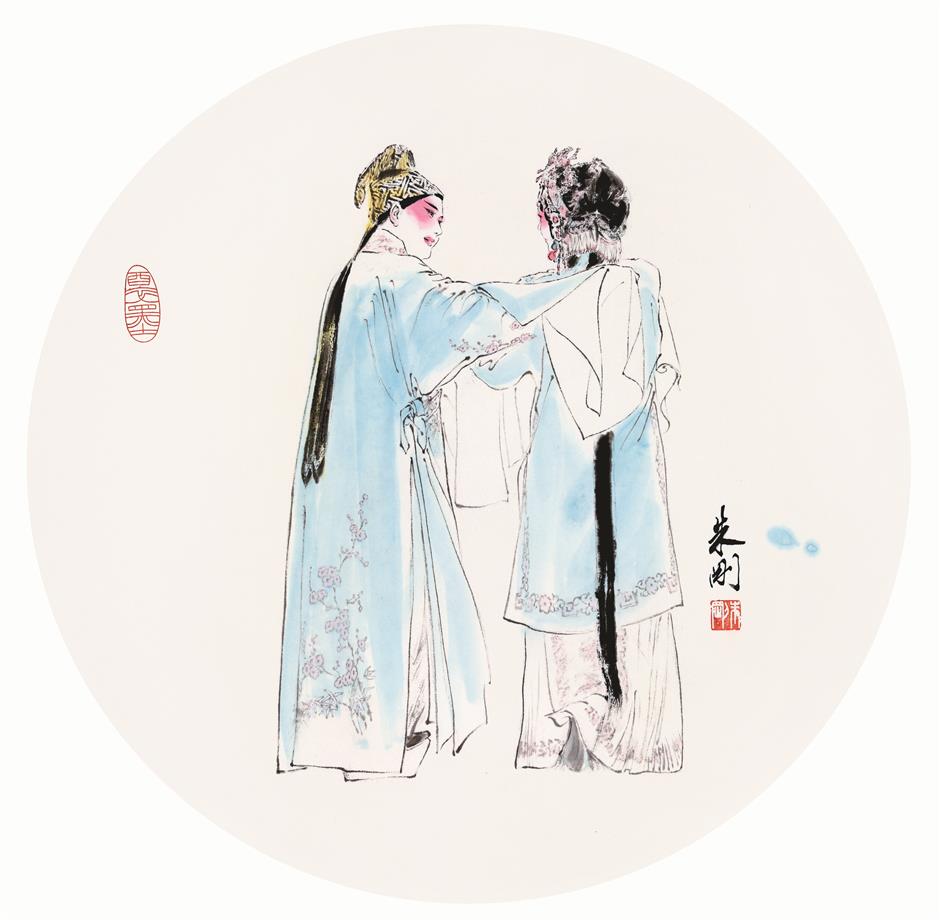