Liu Ming is first violin in the quartet, with her equally young classmate Chen Jiayi on second violin. They are joined by principal viola Ba Tong and principal cellist Zhu Lin, both born in the 1980s.

“We didn’t start by thinking that it ought to be a group of all female performers,” Zhou Ping, director of Shanghai Symphony Orchestra, told Shanghai Daily.

“It just happens that all four are excellent young women performers with much to anticipate in the future, and that’s great. It is a global trend that the number of women musicians continue to rise in symphony orchestras.” 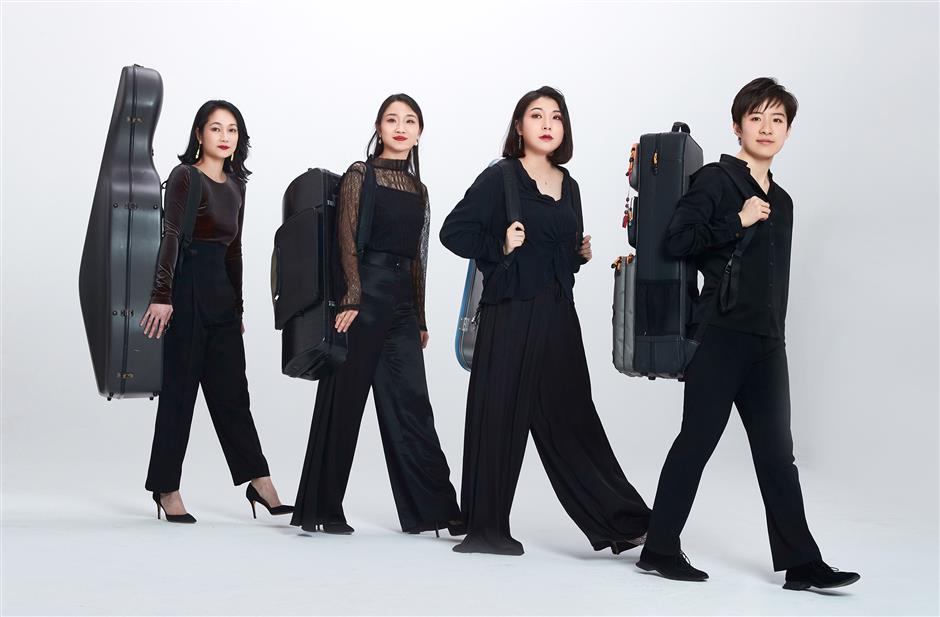 The quartet was formed shortly after Liu became the orchestra’s youngest female concertmaster in its history last June.

At the time, the orchestra was preparing to welcome audiences again in its summer music festival in July and then the new season in September, months after concert halls were closed due to the COVID-19 pandemic.

The number of audiences were restricted when the concert hall first opened the gates again, and strict pandemic-prevention measures were required.

“What makes the situation uncommon is that I actually became concertmaster of SSO in the middle of the pandemic,” Liu said.“Since I was merely a student of the Shanghai Conservatory of Music at the time, I was thrilled to receive the offer. I felt overwhelmed by the transition to the role as well as by my lack of experience.”

Encouragement from the other members and the increasing frequency of performances helped her get used to the new position.

Classical music has been booming in the city and around the country, proved by sell-out performances and more diverse talents. Compared with symphony, chamber music started much later in Shanghai and is still in the early stages of it being developed and promoted to more audiences.

“We all have strong personalities and preferences in the repertoire,” said viola Ba Tong. “We had many discussions on how to accumulate our repertoire in the future and had some consensus among the members.

“Certainly we will have to play the masterpieces of the masters, so we start with Beethoven, also a continuation of the orchestra’s serial celebrations of his 250th birthday. But we also want to play more contemporary works like those from Shostakovich and Stravinsky, among others.”

In her early 30s, Ba is one of the most familiar faces to the orchestra’s audiences for having taken on so many different roles. She is often the one who introduces and interprets pieces to audiences before performances. When the orchestra was limited to online performances earlier last year, she was one of the most active in online events and classes, and even tried livestreaming.

“Audiences today are very different. They probably have heard enough of the early classical masterpieces. We want to play more works that are closer to our times, so that we can have more resonance with audiences while introducing less-heard pieces to them,” Ba said.

In the quartet, Ba and other members often rely on cellist Zhu Lin on final decisions. The Shanghai native was the first to enter the symphony orchestra in 2009, after returning with a bachelor’s and master’s degree of music at the Juilliard School and a second master’s degree majoring in orchestral study from the Manhattan School of Music.

She has won various cello competitions and performed frequently around the world, including Carnegie Hall and Lincoln Center in New York.

“Decisions?” Zhu hesitated when asked about the final decisions she made for the quartet, before laughing. “Not really, maybe like telling everyone to wear black pants today for the press conference. In terms of music, we collaborate and accommodate each other’s personality and performances.”

The two youngest members were former classmates at Shanghai Conservatory of Music. They were both recruited by the orchestra when they were still students, in different years.

They were first spotted by the orchestra in the biennial Shanghai Isaac Stern International Violin Competition. Liu was the only Chinese competitor of the six finalists in the inaugural competition in 2016. Chen was the 4th place winner in the second competition and impressed many international judges.

“Liu is like a cat, casual most of the time with her own personality and turns into a different person when playing violin — very explosive,” said Ba, describing the young members.

“Chen is like a little squirrel, cheering us up whenever she is present. She is very diligent, always practicing, probably because she wasn’t professionally trained in music schools until she went to Shanghai Conservatory of Music.”

Yu Long, the music director of the symphony orchestra, has been promoting young musicians for years, by providing them with more opportunities to showcase their talents, such as on solo stages.

Yu, who thought of the English name for the quartet, has high hopes that they can represent the city’s musical spirit.

“A healthy art eco-system increasingly needs more young musicians to inherit and carry on the music,” Yu said.“Shanghai was where classical music started in China, where countless music talent were nurtured and given stages. The Magnolia Quartet is not only a generation of musicians in Shanghai Symphony Orchestra, but also that of Shanghai and Chinese music.

“They deserve attention and I hope they can inherit the city’s musical spirit and legacy, and one day showcase the sound of Shanghai to the world.”