The Shanghai Philharmonic Orchestra is staging five “red series” concerts in the coming months to celebrate the 100th anniversary of the founding of the Communist Party of China.

These concerts will feature both time-honored patriotic songs and new creations by commissioned composers.

The debut performance took place at the Beijing Concert Hall in the capital city on Monday. The next four concerts will be in Shanghai — at the Shangyin Opera House on April 29, Shanghai Symphony Hall on May 3 and Shanghai Oriental Art Center on June 29 and 30. The performances in April and May will serve as part of the 37th Shanghai Spring International Music Festival. 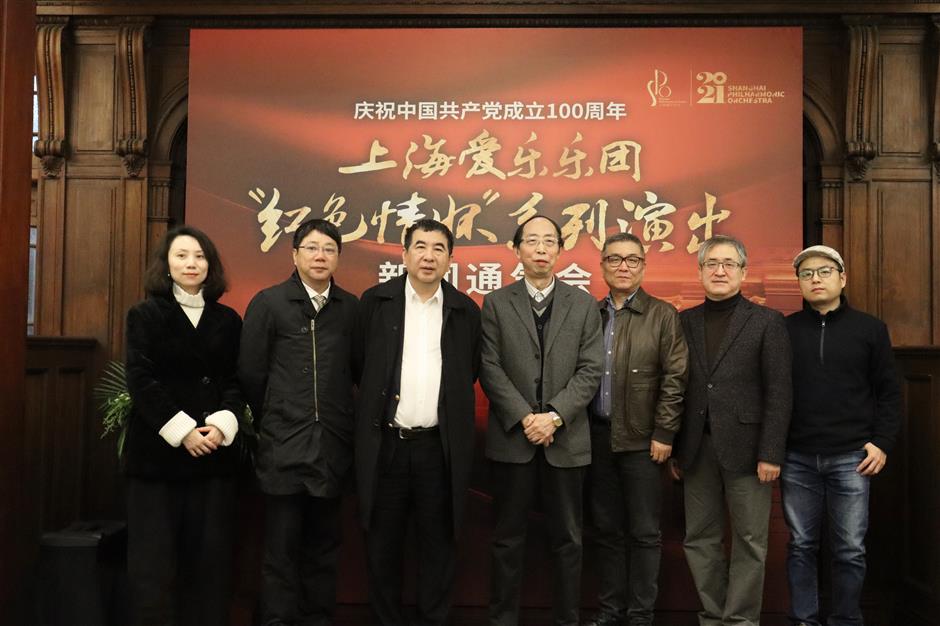 Commissioned composers gather at the opening ceremony for the “red series” concerts.

The April 29 concert will feature 91-year-old veteran composer Lu Qiming’s works. Lu has written more than 100 songs for about 60 movies over the past 50 years.

Shanghai Conservatory of Music professor Zhao Guang, who wrote a shikumen-themed composition for violin and cello, is also among the commissioned composers.

New works by young, up-and-coming composers will also debut during the series. Local composer Gong Tianpeng’s “Symphony 2021” will premiere at the concert on May 3.

“For young composers like us, the commission provided us with a chance to review the stories of our growth during the new era,” said Liu. “People are living very fast-paced lives and rarely have time to look back, so it’s a meaningful creative process for me.”