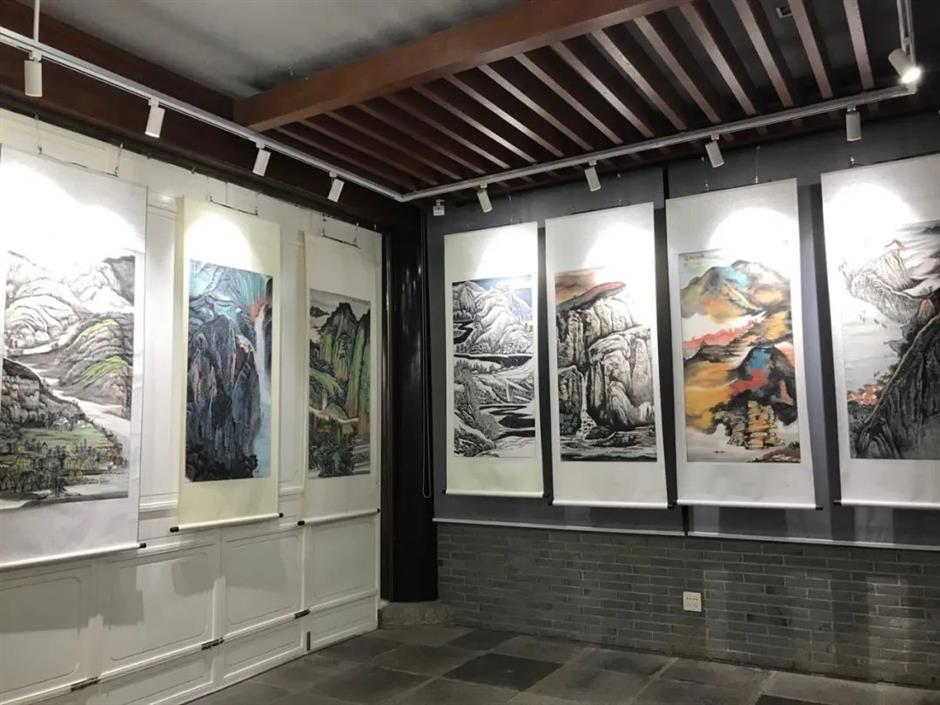 The exhibition showcases paintings by Jiading painter Wang Yuanchang featuring mountains, rivers, waterfalls, birds, flowers and people, most of which are recent creations and making their public debut.

As one of the cultural exchange projects in the Yangtze River region, an exhibition celebrating spring by Jiading painter Wang Yuanchang is on show at the Huaqiao Culture and Art Exhibition Center through April 11.

Seventy-five paintings by Wang, who is 90 years old this year, are on display with the theme of “greeting spring,” featuring subjects such as mountains, rivers, birds, flowers and people. Most are recent creations and making their debut in this exhibition.

Wang is honorary president of Anting Zhenchuan Academy and an inheritor of the intangible cultural heritage of Shanghai’s traditional yaoban cloth which is also called blue-and-white cloth. He went to Zhenchuan Middle School in Anting in 1947 and became interested in Chinese painting under the influence of painter Song Wenzhi (1919-1999) who was then his teacher of arts and crafts.

“I spent my spare time painting while teaching at school. I was so fond of it,” said Wang. He resigned as a headmaster when he was 50 and offered to work as an arts and crafts teacher so that he could keep creating while teaching.

After his retirement, he helped compile books including “Thousands of Years of Ancient Anting Town” and “Anting Anecdotes” and created many artworks such as the interior design of the Yong’an Pagoda and venue designs, copies of ancient books and illustrations for the Gui Youguang Memorial Hall in Huaqiao Town in neighboring Jiangsu Province.

Despite his age, Wang maintains his creative enthusiasm toward painting, getting up at 5am every day and taking a rest at 5pm. He can finish a piece of art in just one or two days. He also goes to the houses of local families to paint auspicious patterns on their kitchen walls every year.

The traditional Chinese realistic painting “Scent of Pagoda Tree Blossom in May” is one of the highlights of the exhibition for its difficulty. It depicts a vivid scene of wisteria flowers in bloom with a flock of roosters standing underneath.

Wang’s powerful and colorful painting style has inspired many amateurs to learn the craft, and Wang has been giving lessons for free in Anting and the Juyuan New Area in Jiading and launched a public welfare class in Huaqiao. Among the students of Wang, many are now qualified to hold exhibitions or attend competitions.

Since regional integration has a deeper effect on the lives of residents in Huaqiao and Anting, more cultural cooperation and communication will be explored, according to Shen Xuelong, chief of Huaqiao Town’s literacy federation.

The 300-square-meter Huaqiao Culture and Art Exhibition Center opened to the public in 2018 and has been holding exhibitions that include calligraphy, painting and photographs in different topics, aiming to become a center for collection, research, displays, exhibitions and communication.

Address: 200 meters east of the crossing of Ludi Ave and Huayuan Rd