A celebration of mudan's place in Chinese culture 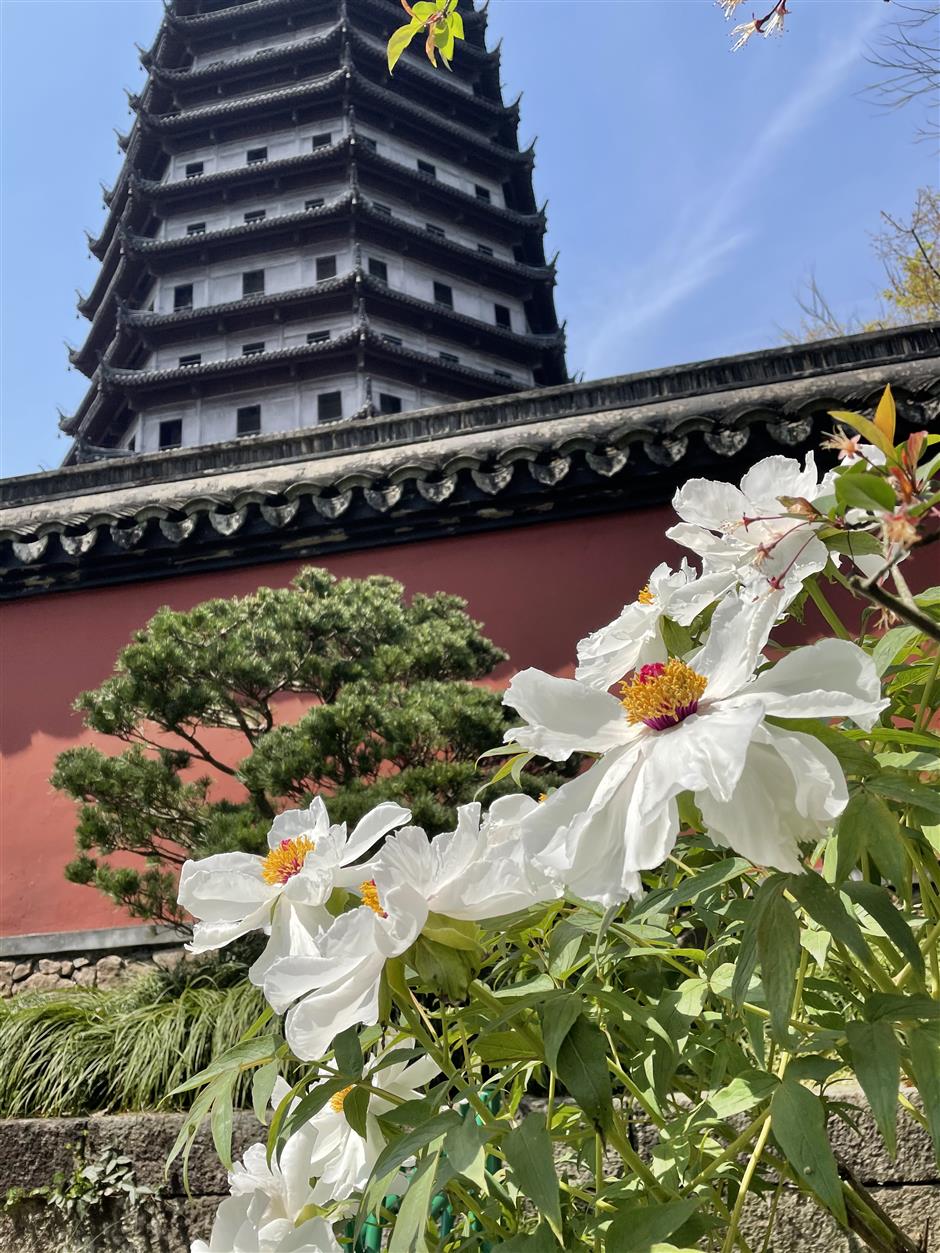 The traditional Liuhe Pagoda Mudan Festival is now in full swing with flower blossoms predicted to last through April 15.

Mudan (牡丹), or poeny, becomes wanghong (Internet celebrity) every spring in Hangzhou. The flower’s size is its most alluring feature, as it usually ranges from 6 to 12 inches (15 to 30 centimeters) across.

Mudan are bushes that generally grow slowly. Because they only come to life briefly and are fragile under conditions such as wind, rain and high temperatures, the festival normally lasts for less than three weeks.

Although China hasn’t chosen it as the national flower, mudan is one of the frontrunners, a reflection of its significant status in Chinese culture. Known as the “king of flowers” in the country, mudan flowers often symbolize honor, wealth and aristocracy, as well as love, affection and feminine beauty.

Throughout Chinese history, it has been frequently portrayed in art. Whether in ink-wash paintings, sculptures or furniture, mudan is a favorite of craftspeople and artisans for its ornate petals.

During the opening ceremony last week, 18 artisans from the Hangzhou Qiantang Painting Society showcased oval mudan-themed fans. Ink-wash painting on fans was once a unique art genre in China. When Hangzhou was the capital during the Southern Song Dynasty (1127-1279), the city had thousands of fan makers, and mudan patterns were very popular at the time.

According to archives, mudan plantations were in their heyday during the Northern Song Dynasty (960-1127) when the flowers dominated markets and gardens.

During the traditional Huazhao Festival, which falls on the 12th day of every second lunar month, ancient people had outings to enjoy mudan blossoms as a way of celebrating the most vibrant day of the year.

Hangzhou hosts flower-themed events every year to celebrate the traditional festival. Blooming mudan flowers in Liuhe Pagoda are a highlight of the annual Hangzhou Huazhao Festival.

This year, the Liuhe Pagoda Scenic Area introduced 12 new varieties of the flower from Henan and Shaanxi provinces. In addition to common pink, white and red colors, rare species such as black, purple and blue are also in full blossom, covering an area of 4,500 square meters. 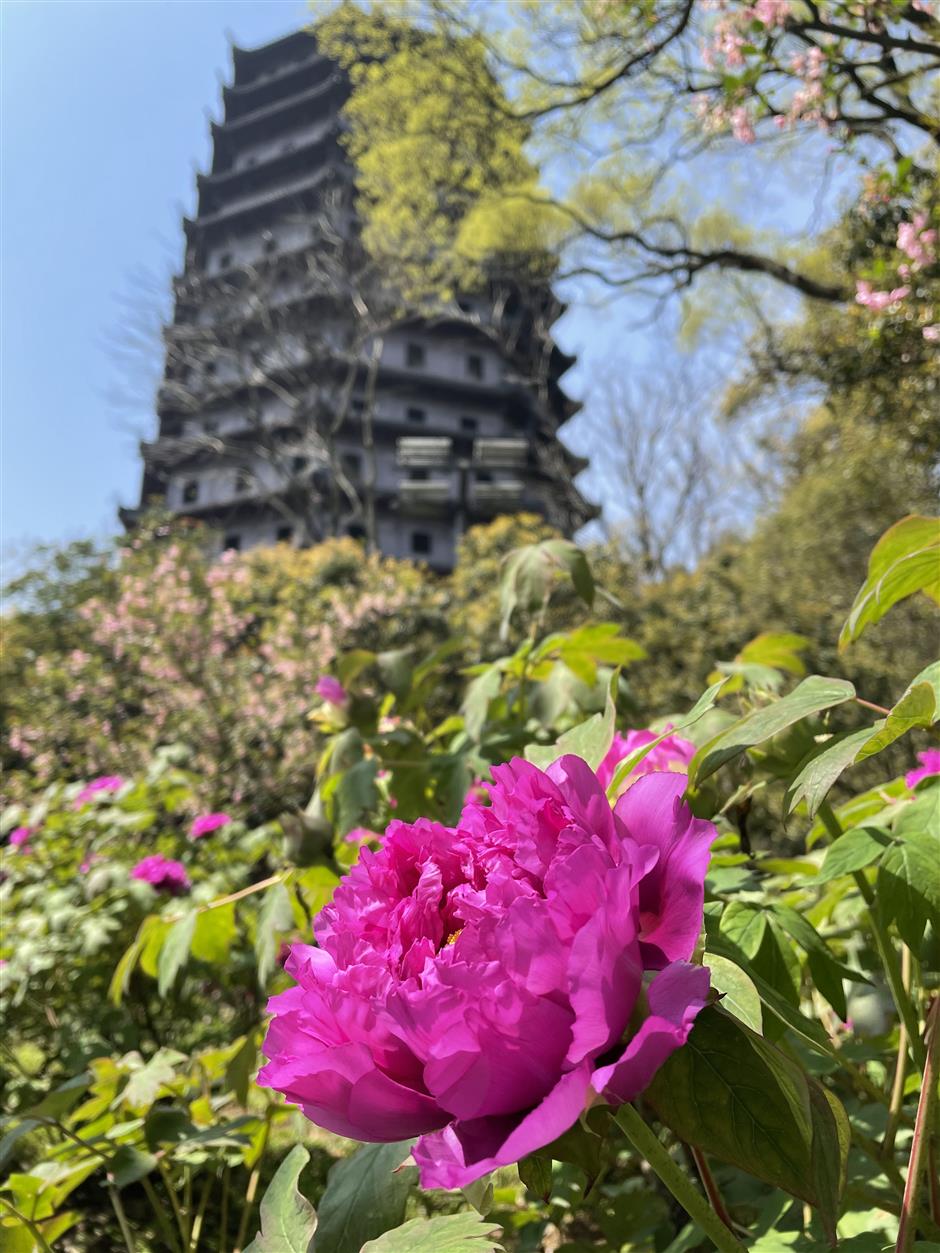 Mudan flowers are in full blossom near Liuhe Pagoda. Covering an area of 4,500 square meters, the traditional Liuhe Pagoda Mudan Festival is now in full swing and will last through April 15.

Pink mudan is blooming as the weather is getting warmer. Twelve new varieties are introduced from Henan and Shaanxi provinces.

For years, the pagoda has been a mudan education center. During the Five Dynasties and Ten Kingdoms Period (AD 907-979), the pagoda was a garden where mudan flowers were grown.

Mudan experts guided visitors on tours around the garden on March 28. The ideal growing environment for the flower is humus-rich soil with plenty of organic matter. However, different natural environments endow mudan flowers with assorted-petal shapes and shades. Guides also discussed mudan cultivation during the tour.

On April 10, a flower arrangement class will be held to spread the culture of the Song Dynasty (960-1279). During this period, flower arrangement was popular among scholars who prioritized the humanities, turning to people’s inner emotions and a minimalist art style, which were evident in many paintings featuring flower arrangement from that era.

Artisans will give lectures on Song Dynasty culture and use mudan as one element in flower arrangements.

In addition to the blossoms, visitors can climb the Liuhe Pagoda at the bank of the Qiantang River which thought to be one of the world’s largest tidal bores. As the tide rushes into the mouth of the river from Hangzhou Bay, waves can rise as high as 9 meters.

During the Five Dynasties and Ten Kingdoms Period, Emperor Qianliu of the Wuyue Kingdom (AD 907-978), which is today’s Zhejiang Province, presided over the pagoda’s construction, which was expected to “calm” the tidal bores. 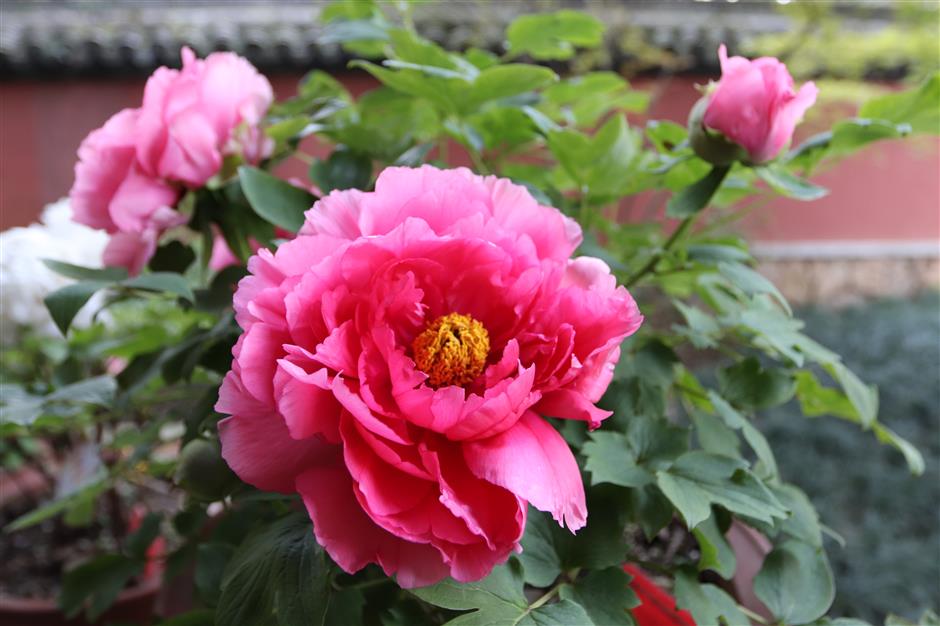 ﻿
Special Reports
﻿
61761
,
A celebration of mudan's place in Chinese culture
From a shed to Buddhist shrine
Wang's creations welcome warm spring in Jiading
Family treasure: Memories are made of this
More impressions of Monet and impressionist masterpieces
Hermès luxury brand exhibition goes off camera
The Forever bike that ruled the streets of Shanghai
Pandemic fight at forefront of institute as history rhymes with itself
Breathing new life into Zhejiang's ancient towns
Photo-painter creates stories without words
EXPLORE SHINE