Self-automated art loses none of its fascination over time

While most Chinese young people are keen on the latest technology and eager to see what will come next, Yu Chenrui chooses to look back.

The graphic designer makes automata — self-operating mechanisms that are sometimes called the “genesis of robots.” He draws on knowledge dating back thousands of years, and is probably the only person in China doing such work full-time.

Born in the Sichuan Province capital of Chengdu, Yu majored in graphic design at Communication University of China.

In 2015, when he saw automata works by Japanese master Kazuaki Harada, Yu said he found himself attracted to the art form — the wooden devices creating certain scenes and moving like a circular puppet show when the handle is operated.

“I realized that this could be what I really wanted to do,” he said. “Back then, I had just started to learn carpentry, which automata encompass, along with other things I like to do, like painting and sculpting.”

He explained: “In university I did a lot of digital works, such as illustrations, arts and stop-motion animation, but eventually I found that I preferred to make real things with my hands.” 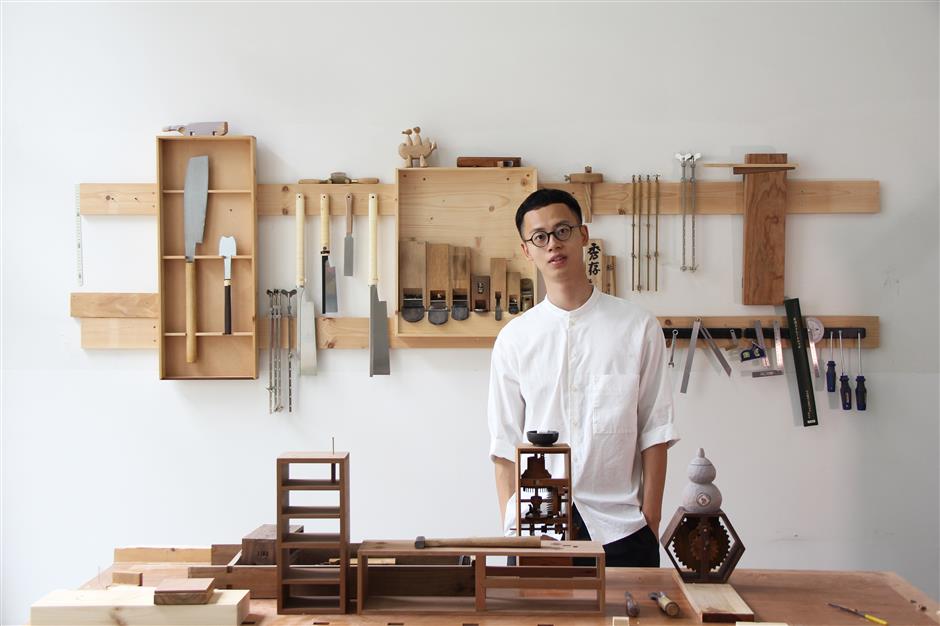 Yu Chenrui in his workshop

Automata have intrigued people for centuries. Ancient Greeks are believed to be the earliest users. In fact, the word “automata” (the plural of “automaton”) comes from the Greek language.

One ancient example was a water basin developed by mathematician and engineer Hero of Alexandria (circa AD 10-70). It featured singing metal birds. When a mechanical owl turned its head to the birds, they stopped singing.

In ancient China, the wooden ox and gliding horse mechanism, known as mu niu liu ma, was developed by court adviser Zhuge Liang during the Three Kingdoms period (AD 220-280). His mechanical devices were used to transport supplies to the battlefield.

Leonardo da Vinci wrote extensively about automata, and his personal notebooks are littered with ideas for mechanical creations, ranging from a hydraulic water clock to a robotic lion.

Among other notable historical creations was a 38-centimeter-high, 16th century “mechanical monk” powered by a wound spring. It was created by a clockmaker for King Phillips II.

In the 12th and 13th centuries Arabic polymath Al-Jazari created a water-powered automaton orchestra that could float on a lake and provide music during parties.

Swiss inventor Pierre Jaquet-Droz created one of the 18th century’s most extraordinary automata. It featured a 61-centimeter-high doll designed to look like a boy sitting at a desk. Using a series of coded disks set on a spindle and thousands of moving parts, the robot could dip a quill in an inkwell and write up to 40 pre-programmed characters on a sheet of paper.

In the modern world, automaton technology is used mainly in stage scenery and props. Or, like what Yu and Harada do, the technology can be used to make artistic creations for entertainment and for collectors.

Yu started his exploration of the genre with simple experiments to see how cams and gears worked together to make an object move.

“A piece of work usually starts with an idea — which may seem bizarre to some people — and then I sketch it down in my notebook,” Yu said. “After that, I have to choose the materials to make it.”

Woods, both hard and soft, are often used in construction. Yu said he prefers the traditional mortise-and-tenon structure for joints, rather than glue or nails.

“I love to feel the materials,” he said. “I love the feel of wood, its textures, colors and natural scents.”

Automata have never been widely popular in China, so it’s a bit difficult to find books or mentors to learn from.

A British handicraft website called Cabaret Mechanical Theatre has become Yu’s major source of information, along with books friends have brought him from foreign museums and galleries.

One of Yu’s graduation projects was an automaton creation entitled “Magic of Frogs.” The work has four frogs, three performing a magic show while the fourth applauds them. Like most automaton works, it comprises two parts: an upper stage and a lower mechanism.

If a handle on the lower part is turned, the four frogs move simultaneously. One frog waves its hand; another pushes and pulls a lever under a hat; the third jumps in and out of the hat; and the fourth claps.

“The mechanism was actually quite difficult to manage because the movements of the frogs needed to be coordinated with each other,” Yu said.

The young designer didn’t think he could make a living by creating automata, so he found a nine-to-five job in Beijing. The company where he worked admired his hobby and even set aside a corner in the office as his workshop.

However, a full-time job sapped much of Yu’s time and energy, making it difficult to fully realize his automata dreams.

Three years later, Yu quit the job and returned to his hometown Chengdu. He spent all his savings of 300,000 yuan (US$46,000) to find and renovate a workshop.

“When I purchased the place, it was a roughcast house with no decor at all,” he said. “With help from my parents and their friends, I was able to redesign the space by adding partitions, painting the walls and setting up lighting. Now it has everything a carpenter needs, from tools and machinery to a storage area for all the wood.

Yu’s father is a policeman, his mother a housewife. At first, they couldn’t understand why their son would want to give up a well-paying job to make what seemed like gizmos. His father once told him that he wouldn’t buy one of the son’s works for love or money.

But eventually Yu’s parents were moved by their son’s passion and supported his choice.

“It seemed that they accepted that being an artist is actually a proper job,” Yu said. “But I understand why they were skeptical at the first because automaton art is indeed a niche endeavor in China.”

Yu admitted he thought long and hard about quitting his job and devoting himself full-time to his passion. He remembers passing a lake on his way to work and envying the freedom of ducks paddling on the water.

“At that time,” he said, “I often asked myself: Is the current life what you truly want? Do you really feel happy every day? Will you regret it if you didn’t do what your heart tells you?”

The inner struggle inspired him to make an automaton creating entitled “Finding Yourself.” It features a duck stretching out in vain to reach for something. Later at one of his exhibitions, Yu heard visitors discussing the work. The words of an elderly woman touched him.

“She was with her granddaughter, and the little girl asked her: ‘Why is the duck reaching into the air?’ That grandmother replied: ‘Because looking for oneself is a long process.’” Yu said that as people change, they are always searching for themselves.

“What the old woman said resonated strongly with me,” Yu explained.

Nowadays, Yu manages to support himself by making automata. He has been recognized by Harada, his initial inspiration, who advised him to take his works to an international wood exhibition.

He sold some of his works and accepted orders. This year, he said, he hopes to hold an exhibition in Shanghai.

Despite success, Yu said he is still searching for himself.

Several months ago, he hurt his left foot badly while chopping a log and had to undergo surgery. After the operation, he had to lie still in bed for eight hours, giving him ample time to think again about his life.

“That situation reminded me of a work I once made — a fish struggling out of water,” he said. “My life is a cycle like an automaton, and I want to fill it with things I love.”

"Fish Struggling Out of Water"

Special Reports
ADVERTISEMENT
Self-automated art loses none of its fascination over time
A celebration of mudan's place in Chinese culture
From a shed to Buddhist shrine
Wang's creations welcome warm spring in Jiading
Family treasure: Memories are made of this
More impressions of Monet and impressionist masterpieces
Hermès luxury brand exhibition goes off camera
The Forever bike that ruled the streets of Shanghai
Pandemic fight at forefront of institute as history rhymes with itself
Breathing new life into Zhejiang's ancient towns
EXPLORE SHINE