Shang explores the matter of life and death

Unlike ancient Greek mythology where Gods and Goddesses are at the helm, in Shang Liang's new solo exhibition "Mortal at the Helm," the Chinese avant-garde artist explores the ultimate potential of the mediocre and probes into power, strength, life and death with her latest work. 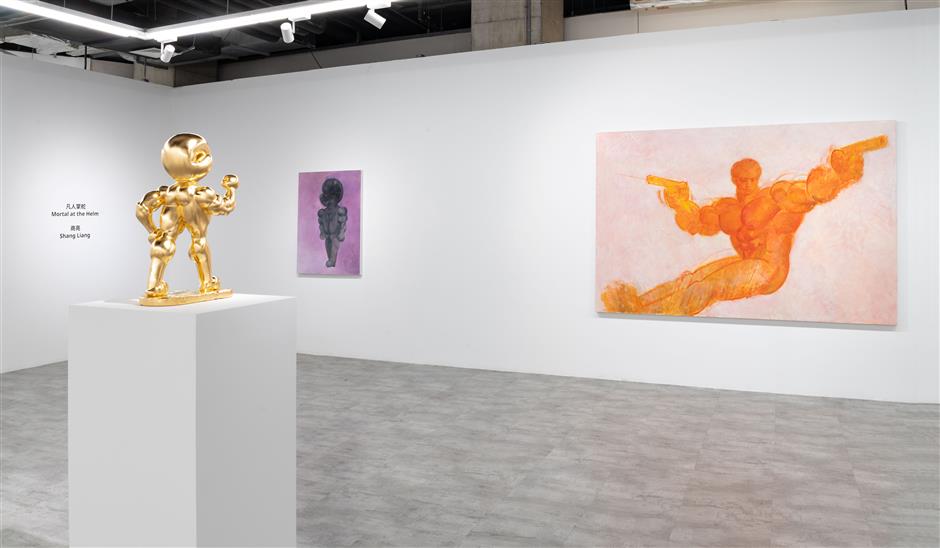 Shang Liang's solo exhibition "Mortal at the Helm" is ongoing at MadeIn Gallery.

Born in Beijing in 1981, Shang grew up in a military community with her medical professional mother and engineer father. The contemporary artist recalled her interest in painting began as a child trying to liberate herself from long and dreadful writing practice sessions. The little girl felt scared yet thrilled when reading her mom's books on anatomy which developed her passion for story-telling and elements such as muscles, vessels and the human body. 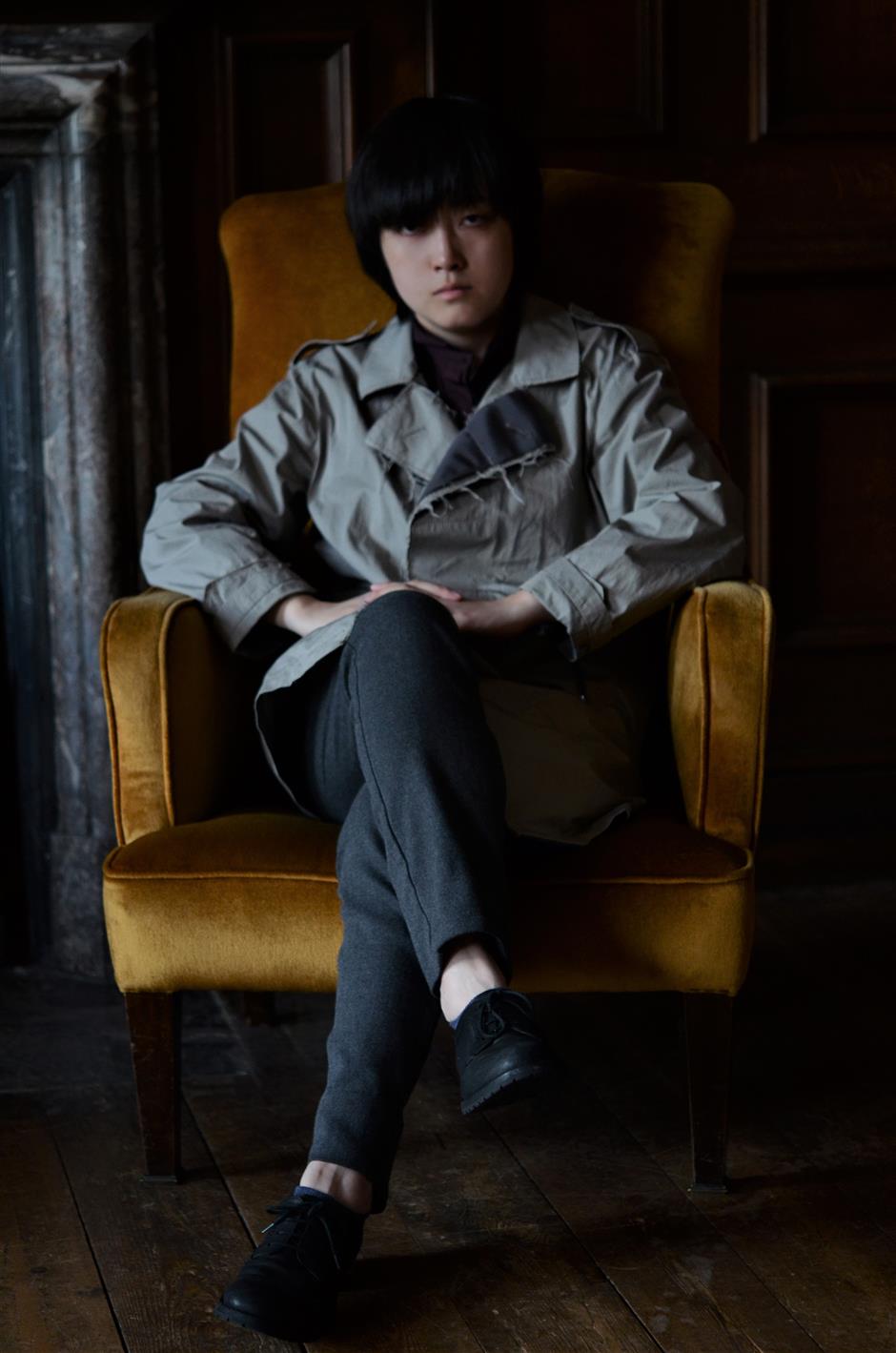 Born in Beijing in 1981, Shang Liang grew up in a military community with her medical professional mother and engineer father.

Shang graduated from the oil painting department of the Central Academy of Fine Arts, one of the world's most prestigious art schools, in 2004. After several years searching for a path to expression, she returned to the academy to finish a master's program in experimental art, where she gradually formed her unique style.

"I'm not that interested in things happening in the blink of an eye or any specific scenarios. What I had longed for is to create a self-representative image that could wrap up my opinions and experiences," Shang told Shanghai Daily, explaining the initiation of new roles she invents in every single series. 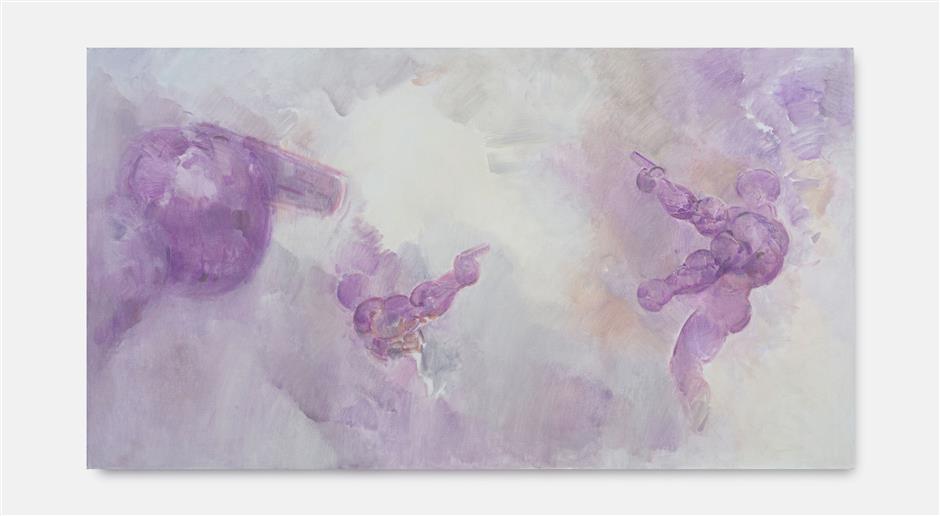 Shang started working on "The Real Boy" series in 2012 based on her contemplation of adolescence. The teenage boys with slim figures portrayed in this series boast abnormal swollen muscles in their abdomens, chests and arms. Some of them even feature long, pointy noses, which they use as syringes to inject the filler to "pump up their muscles." 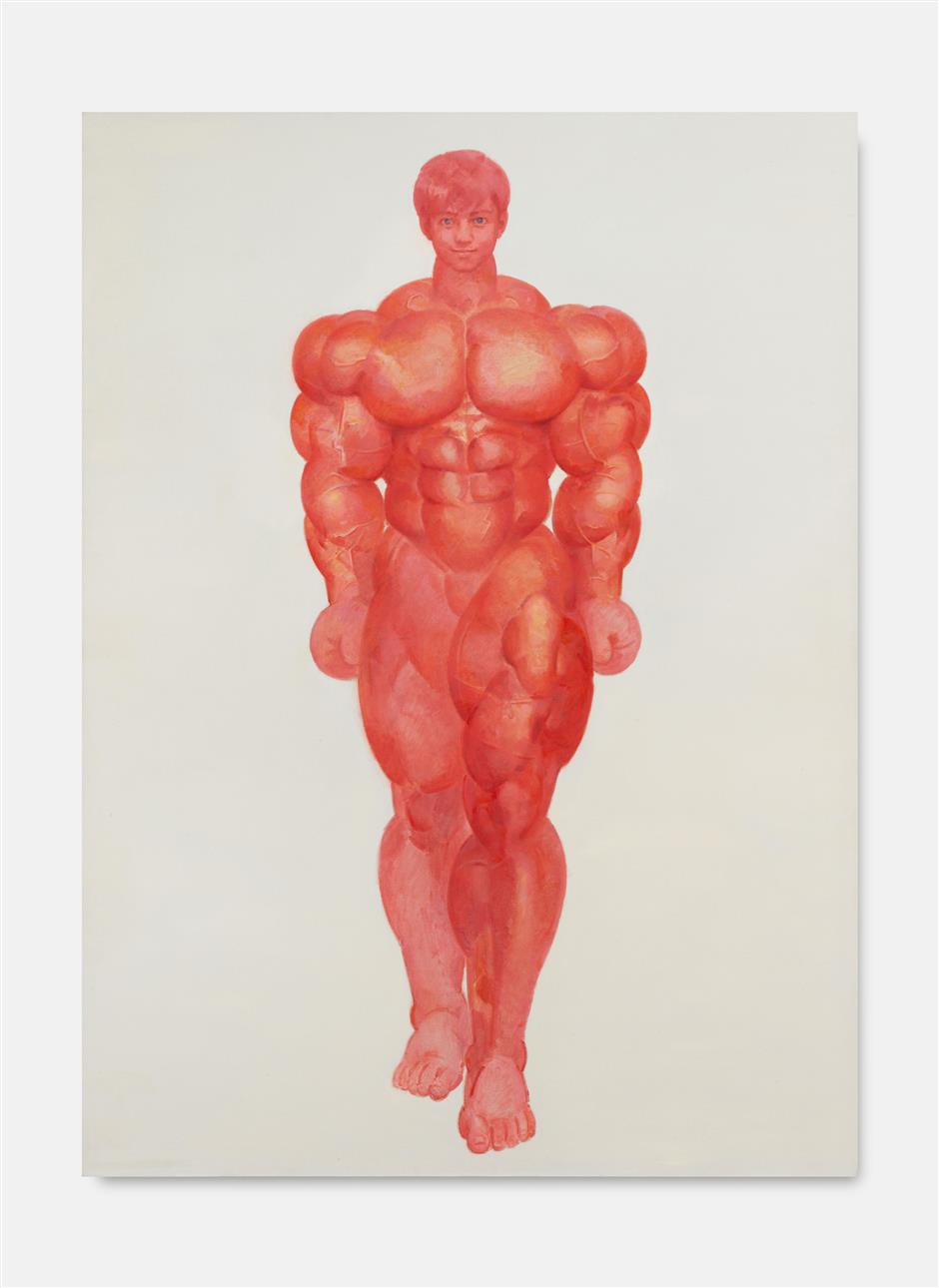 Inspired by stand-in photo cutout boards people encounter on a daily basis, the artist brought her "Sofa Man" series to the public, in which shredded bodies without faces are turned into sectional sofas in both paintings and sculptures.

"To me a sofa is a piece of furniture that represents the alternation of different relationships," said Shang.

Shang held her solo "New Order" exhibition at the Gallery in Shanghai and announced the birth of an independent species with a distinctive and strong visual image, which is not only full of heroic physical capacity, strength and authority, but also constitutes a vague metaphor of loneliness and contradiction. 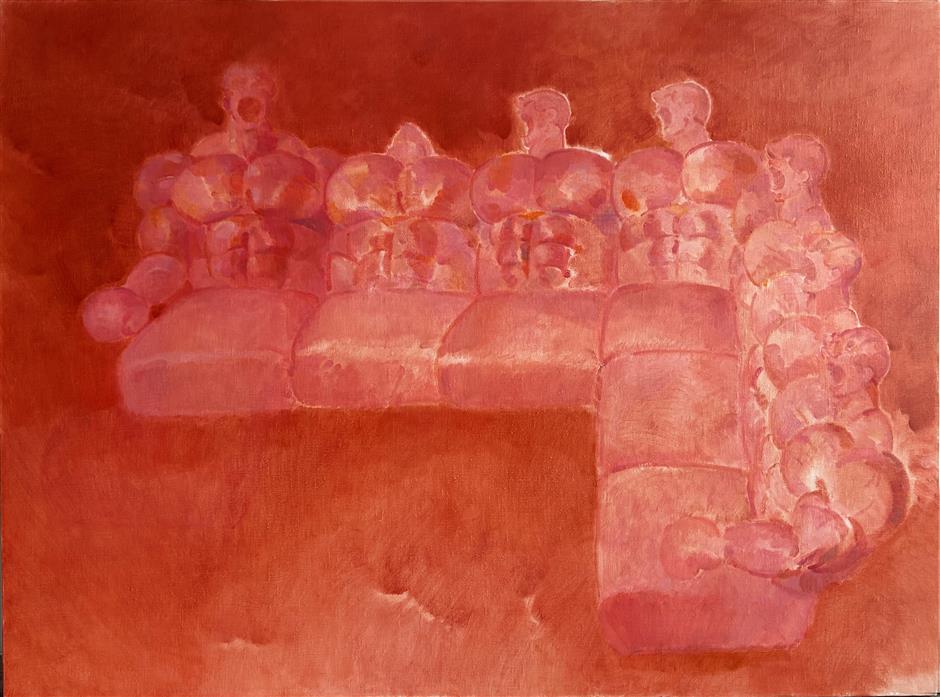 The inhuman species in the latest "Boxing Man" series is a boxing glove in the place of the head with no sexual organs. In sculpture "Portrait of the Boxing Man No. 2," the head with open-mouthed laughter, as an homage to Doraemon – a cute, round, earless robotic cat in the namesake Japanese manga series – contradicts its proportional muscular trunk.

The legs and arms in the free-standing fiberglass piece of art are attached to the thighs at the hands. The standing position not only echoes her memory of growing up in a military household but also reflects her admiration of ancient Egyptian and Greek cultures. 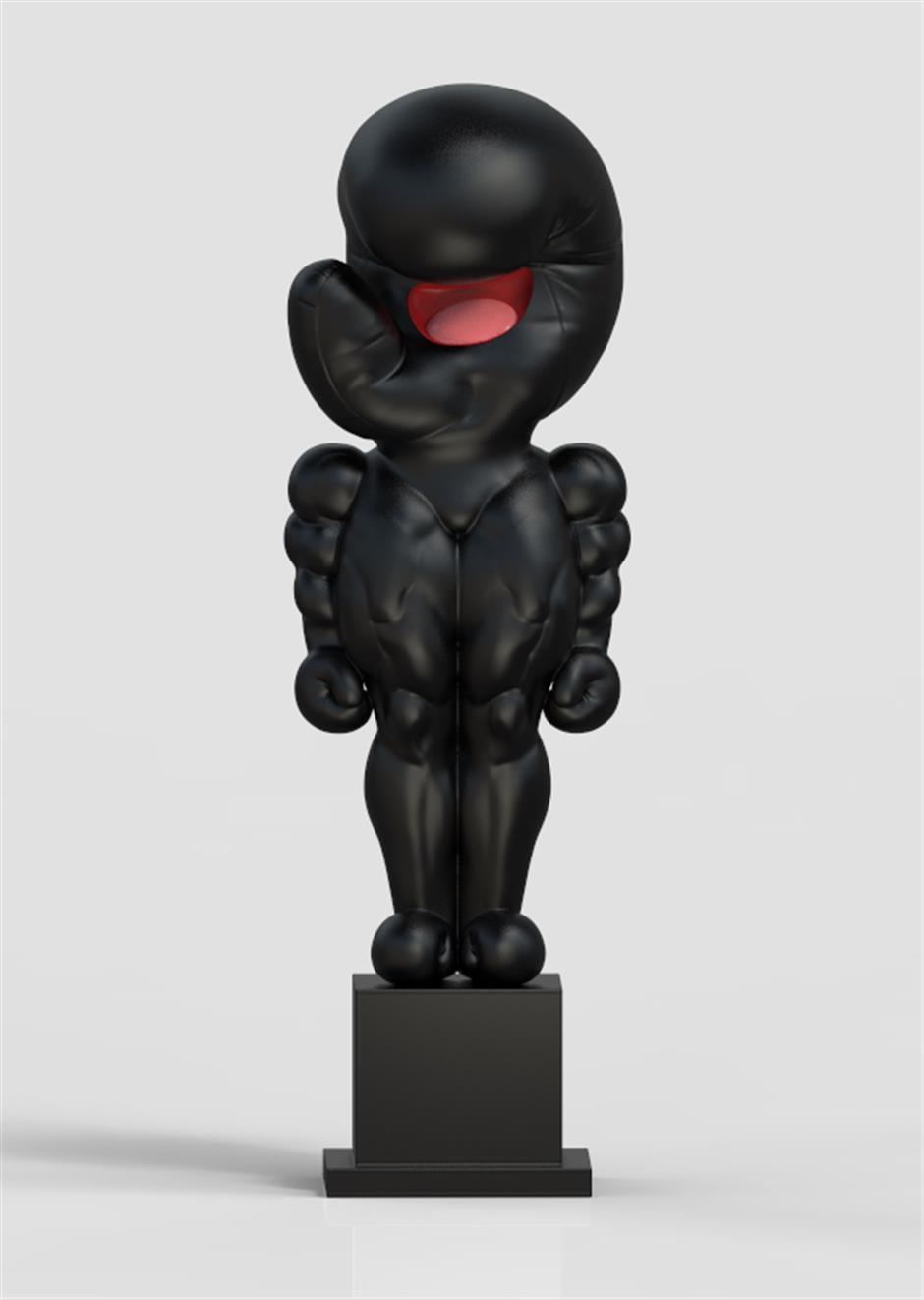 The new "Mortal at the Helm" exhibition, an adaptation of an ancient Greek mythological notion, showcases the audacious and unorthodox side of the contemporary artist. "People say 'those who are ignorant are fearless,' and that's what I intend to tell the audience," said Shang.

"Nobody knows what a world it will be when mortals are at the helm." In the long run of history, the ordinary could be insignificant and vulnerable, but still "they are striving to take control." As her first solo exhibition since the COVID-19 pandemic, Shang also investigates life and death in her new work, citing the prevailing ideas of immortality and afterlife in ancient Egypt.

"The ancient Egyptians seem to have spent much of their time thinking of death and making provisions for their afterlife," said Shang. "And I think what I'm doing, my art pieces as records and archives of my image, is a way to beat death and vanishing."

With decades of rigorous training, Shang's brushstrokes are bold and powerful, with layers and layers of black, red and maroon colors in dominant and symbolizing blood and bruises. In her new works, the versatile talent applies gray, gold and purple shades to explore the connotations of the unknown, heroism, authority and ambitiousness. "Besides luxury and fantasy, there is a sense of obscurity in purple. The crystal violet color reminds me of pain and physical impact, which is strikingly exciting," Shang said.

Selected works by Shang are on display until the end of this month.

Mortal at the Helm