The timelessness of Varanasi's music comes alive in documentary

Somewhere around the end of 2019, Chaiti, the Shanghai-based organizer of the annual music and dance festival, was working on an ambitious project to bring an ensemble of instrumentalists from India’s musical heartland, Varanasi, to China.

The city in north India, locally known as Benares, holds the same pride of place among the devotees of Indian classical music as New Orleans does for jazz enthusiasts and Liverpool for Beatles fans.

But the pandemic upended everything and the planned tour of China in 2020 had to be shelved. Rather than be despondent and discouraged, Siddharta Sinha and Ravi Shankar Bose, the people behind Chaiti Arts Foundation, saw an opportunity of a different kind knocking as demand for creative online content intensified under lockdown.

The result is the rather illuminating and enlightening short documentary, “The Legend of Benares,” that captures the ethos of the magical city and its rich musical and cultural heritage.

“The musicians from India’s holiest city were supposed to perform in China in 2020. When the coronavirus struck, we requested them to perform on camera for us, keeping the Chinese audience in mind,” says Sinha. “In a way, it was our effort to help the arts and the artists who were among the worst affected by the pandemic.”

Situated on the banks of the Ganges — revered as “mother river” by pious Hindus — Varanasi provided a fertile ground for arts and crafts to flourish in India for centuries. It is among the world’s oldest inhabited cities and is recognized as the spiritual capital of India because of its history, architecture, places of worship and mythology. 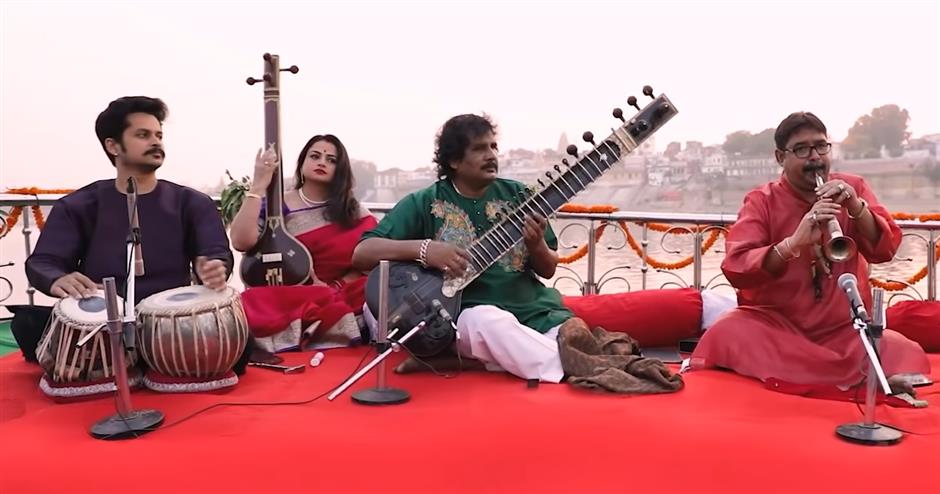 A clip from the documentary, “The Legend of Benares”

The documentary opens with the sights and sounds of the city to the frenzied accompaniment of pakhawaj, a double-headed drum popular in north India, and specially recorded for the film by Rishabh Dhar. It sets the pace for a thrilling musical journey with the “live” rendition of Rag Maru Bihag, a harmonious melody dating back to the 16th century and commonly played in weddings. The musicians are sat on an open boat with the setting sun in the background making for a stunning visual.

We are introduced to the ensemble, which was supposed to perform in China before the virus grounded all plans. Narendra Mishra is on the sitar, a stringed instrument made famous globally by Varanasi-born musician Pandit Ravi Shankar; Fateh Ali Khan, the grandson of another maestro Ustad Bismillah Khan, plays the shehnai, a conical oboe instrument with six to nine holes. Both the musical instruments have a deep connection with the city and resonate eternally with the locals.

There is Shubh Maharaj on the tabla, which is a pair of twin hand drums, and Priyanka Maharaj on the tanpura that resembles a sitar but has no frets. All the musicians are natives of the soil and have a rich musical lineage and the DNA of the “Benares gharana,” the term suggestive of a place where the distinctive style originated.

The “Benares gharana” itself is said to be about a few hundred years old and reportedly has its genesis in the temples and architecture of Varanasi. Some of India’s finest and best-known exponents of music have strong ties with the city. As other forms of classical, semi-classical and folk forms like chaiti, thumri, kajri and hor evolved and thrived over the years, Varanasi enjoyed the status as the center for culture and is today recognized by UNESCO as the City of Music. 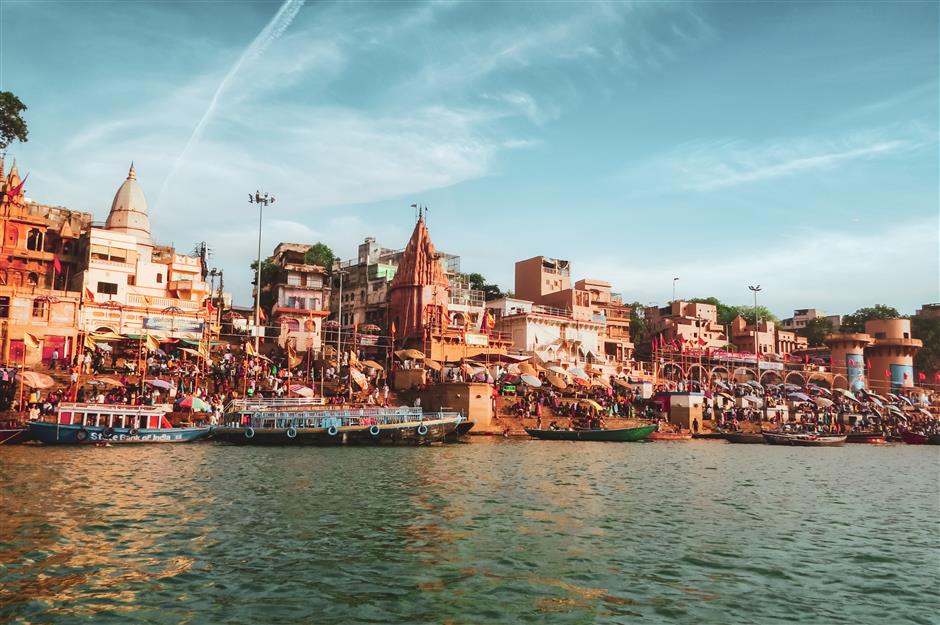 Varanasi is a city on the banks of the river Ganges. It is one of India’s holiest cities but is also known for its performing arts.

That Varanasi appeals intrinsically to the Chinese sensibilities can be felt when He An, a former first secretary at the Chinese embassy in India, speaks endearingly of the city “standing not just as the museum of arts but of spirituality and lifestyle” as well. “How can there be such a flood of intensity in one place?” he queries.

“Varanasi surprises and inspires but never disappoints,” He admits.

Beijing-based dancer Jin Shanshan speaks of the time she spent boating and “greeting the first ray of sunshine in the morning,” and the evening prayer (Ganga aarti) by the river “dispersing the darkness of the night.” Among the other things she recollects fondly of the city was hopping onto “rickshaws to get to the narrowest lanes to search for traces left for thousands of years.”

In fact, it is in the lanes like Kabir Chaura, or Kabir Square, named after a 15th-century Indian mystic poet and saint, where the musical notes of sitar, shehnai, tabla and alaap (renditions) reverberate across the walls. It is in these lanes that the “Benares gharana” flourished and continue to preserve the tradition and nurture local music.

“Only a handful of cities can match the intensity, passion and everlastingness of Varanasi,” says Sinha. “Music literally can be heard everywhere — from the ghats (river banks), lanes, temples, restaurants ... They are always buzzing ... from classical to folk to popular. Music played here forms a part of the legacy of the city.”

It is obvious that music gains acceptability wherever there are artists performing and people attending concerts. In that sense alone, Varanasi does not disappoint. The city hosts a variety of musical evenings with religious festivals providing more reasons to celebrate. Buddha Purnima that marks the birth of Buddha is one of the top draws as is the prestigious Dhrupad Festival that runs for three days. It is in these festivals that budding musicians look to grab their opportunity and lay claim to their place under the sun.

“The Legend of Benares” is in itself one big concert with the musicians enriching us with their long, unique synthesis of classical ragas and folk songs. Sudhir Mittoo, as the narrator, does well in introducing the richness and diversity of the city and highlighting its many nuances and traditions.

Varanasi has always been a photographer’s delight but those with hearts and minds can also hear the walls sing.

The film, which was screened to a select gathering here, is available on Youku and Tencent Video with Chinese subtitles.

Special Reports
ADVERTISEMENT
The timelessness of Varanasi's music comes alive in documentary
Docu series an intimate look at heroes' lives
Buzzword: 撕漫感 manga-ish, cartoonish
Imperial calligrapher with style
Shang explores the matter of life and death
Self-automated art loses none of its fascination over time
A celebration of mudan's place in Chinese culture
From a shed to Buddhist shrine
Wang's creations welcome warm spring in Jiading
Family treasure: Memories are made of this
EXPLORE SHINE