TCM therapy that has a generational touch

Huang Suying is among the last few practicing specialists of Cai’s Gynecology at the Shanghai Institute of Traditional Chinese Medicine Literature.

As a TCM medical specialty, Cai’s Gynecology deals with the diseases and hygiene of women in regulating menstruation, assisting pregnancy and childbirth, as well as fever, fatigue and depression during the postpartum period.

A native of Shanghai, Huang enrolled at the Jiangxi Traditional Chinese Medicine University in the 1970s. With an excellent academic record, she became an assistant in the university’s department of TCM history and heritage. It was a time that made her realize the importance of carrying on TCM traditions and practices from various schools.

“Traditional Chinese medicine is often used as a catchall for Asian medicine. This includes TCM practices in Korea, Japan, and Vietnam,” says Huang. “With over 3,000 years of history, TCM is one of the most fascinating aspects of Chinese culture. Each school of thought has its unique history.” 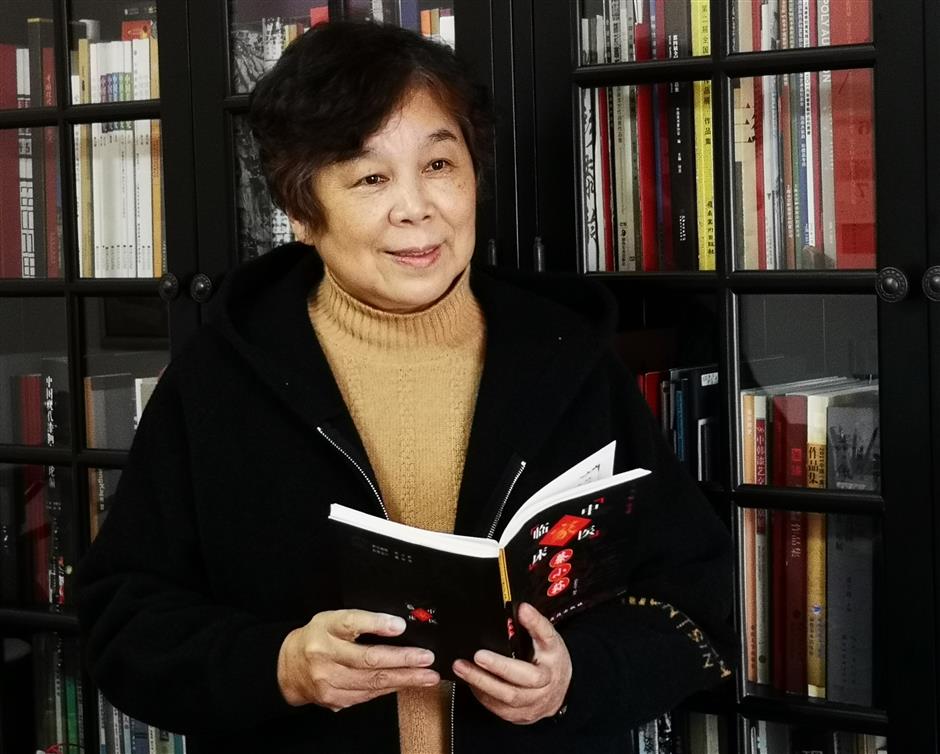 Huang Suying, head of the eighth generation of Cai’s Gynecology, hopes to pass on her TCM skills to the next generation.

In 1993, Huang joined the Shanghai Institute of TCM Literature that was to usher in a new stage in her career development. One of the works she was involved in was to record and preserve the academic thoughts and clinical experience of the master therapists of different schools and pass them down to the next generation of practitioners at TCM schools and hospitals.

In 1997, Huang, then about 40 years of age, became a student of Cai Xiaosun, who was born into a family of doctors in 1923 and was the 7th generation practitioner of the Cai’s Gynecology.

“Due to the ‘cultural revolution’ (1966-76), his sons were unable to follow the family tradition. I was able to learn from Professor Cai by simply observing him at the clinic and getting to know the Cai’s tradition as well as the clinical experience and integrated theory for diagnosis and treatment,” says Huang.

Cai’s Gynecology originated in Shanghai’s Jiangwan Town in the mid-18th century and is one of the three major schools of TCM gynecology nationwide. It has a history of 280 years and has been passed down from father to son for seven generations.

The foremost thing for a TCM student to do is to trace a school’s origin and heritage and to review the academic work through generations. For a prominent family like that of the Cais, that involves a lot of work. 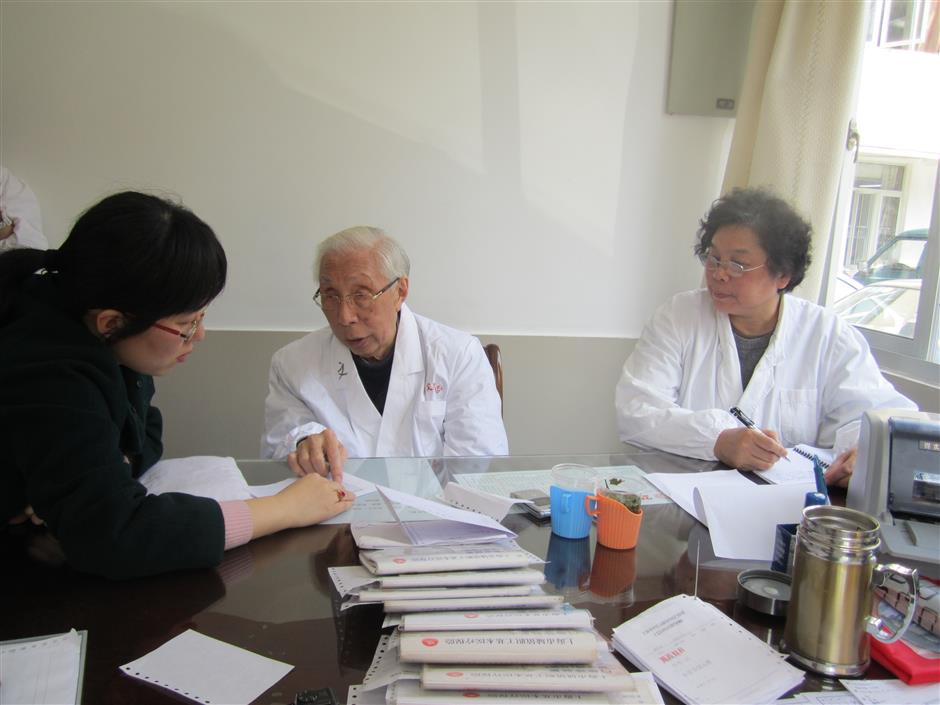 The first four generations of Cai lived during the Qing Dynasty (1644-1911). According to the Baoshan County Annals and Jiangwan Town Annals, they were a family of scholars educated in Confucian doctrine.

Cai Ban’geng and Cai Shengquan, the second and third generation from the family, furthered their medicine studies by learning from other TCM practitioners in Shanghai. They specialized in studying women’s diseases. With accumulated medical theory and clinical experience, Cai Yanxiang, the fourth generation, made an effort on treating common and complex disorders of female patients in books such as “The Secret Prescriptions of Gynecology.”

Cai Xiaoxiang (1863-1912) and Cai Xiangsun (1887-1943) from the fifth and sixth generation lived through one of the most turbulent eras in China, witnessing the fall of the Qing Dynasty to WWII. Cai Xiaoxiang particularly came up with a variety of experiments in dealing with patients and TCM practitioners.

He published medical journals to promote TCM reform and development and established schools to educate the youth. Cai Xiaoxiang believed in integrating Western and TCM medicine for treatment and sent his son Cai Xiangsun to study at Tongji Medical University, which was established by German doctor Erich Paulun. He also set up the first TCM hospital in Shanghai and served as its president.

Cai Xiangsun, who graduated in Western medicine, began to integrate TCM with modern diagnostic tools at his clinic on 596 Beijing Rd E, a move that brought him fame and appreciation of his work.

On January 28, 1932, Japanese warplanes destroyed Jiangwan town. The Cais lost their family home but it did not stop them from helping to build a refugee home for the poor and cremate the dead. He later donated money for a martyr’s tomb in January 1935.

When the Battle of Shanghai broke out in 1937, Cai Xiangsun organized young people in Jiangwan to establish a Red Cross team and was deeply involved in several other social and medical work. He passed away at the relatively young age of 56 in 1943.

His son Cai Xiaosun began studying medicine at the age of 11 and helped at the clinic for five years. After his father’s death, Cai Xiaosun, then barely 20 years of age, began to treat patients. With rich clinical practice and a calm demeanor, he could treat about 100 patients per day. 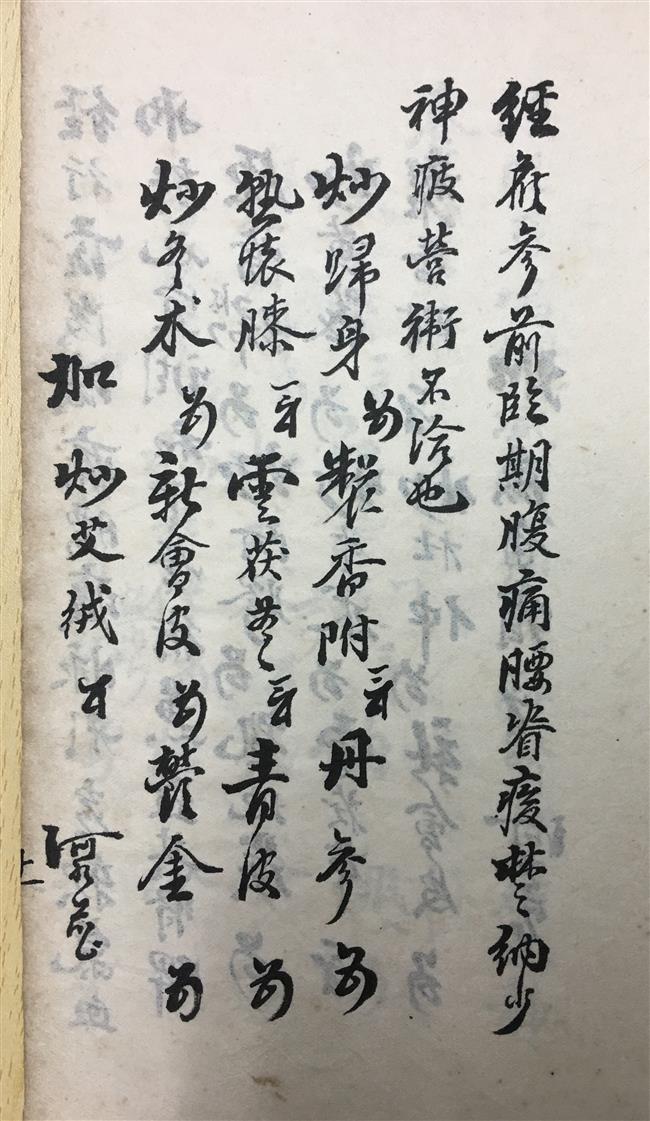 A manuscript of Cai Xiaoxiang (1863-1912). The Cais have created a range of 37 treatments specific to women’s health. 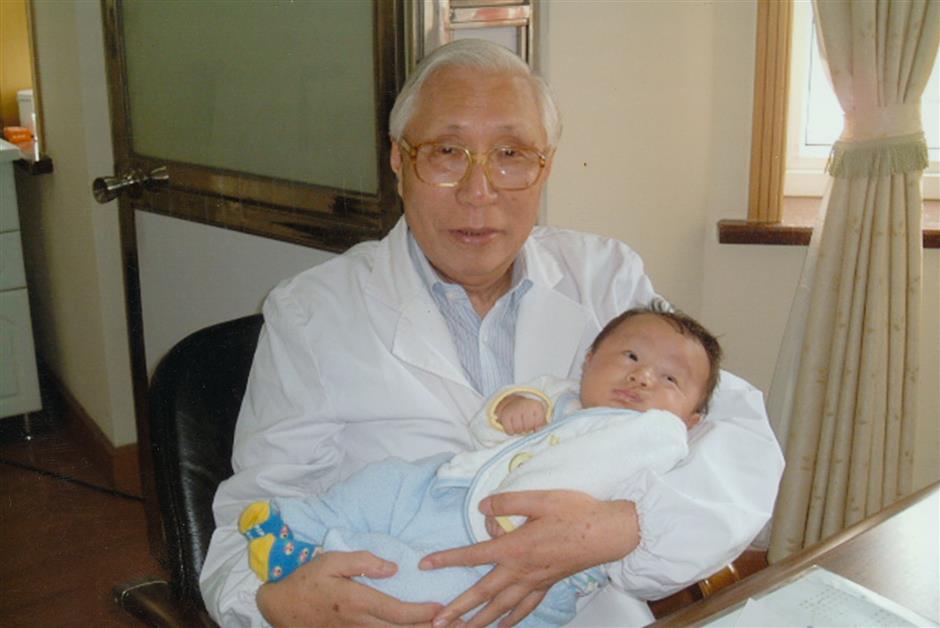 Cai Xiaosun (1923-2018), the seventh generation of Cai’s Gynecology, holds the baby of a patient who came to thank him for his help.

“Academically, Cai Xiaosun was open-minded and welcomed other TCM schools, respecting the predecessor’s knowledge but not rigidly adhering to it. He also called for the combination of Chinese and Western medicine, and put forward the TCM Periodic Therapy based on the women’s menstrual cycle,” says Huang.

In Huang’s clinic, there is always a thick stack of printed “Body Temperature” charts. She teaches every new patient how to take the temperature and write it on a fertility awareness chart.

“Integrating Western temperature method with the 4-phase periodic therapy followed by Cai’s Gynecology has proved to be a convenient and efficient way to make TCM treatment plans in dealing with infertility, abnormal menstruation, endometriosis and hysteromyoma,” says Huang.

“We use different prescriptions in different phases, which are the period, post-period, ovulation, and post-ovulation,” she explains further. “To treat infertility, for instance, measuring your body’s temperature regularly may help you to know when you are about to ovulate. Usually, there is a drop in temperature just before ovulation and a sudden rise — fractions of a degree afterward.”

“I have seen two to three sudden rises of temperature among my patients at the clinic this morning,” says Huang. “I’ve given them the Cai’s herbal prescription to regulate qi (vital life energy), nourish xue (blood), support the balance of yin and yang, as well as to warm the channels, to assist pregnancy. “If you ask me, I’d say a woman should give birth to a child at least once in their lifetime for their well-being,” says Huang. 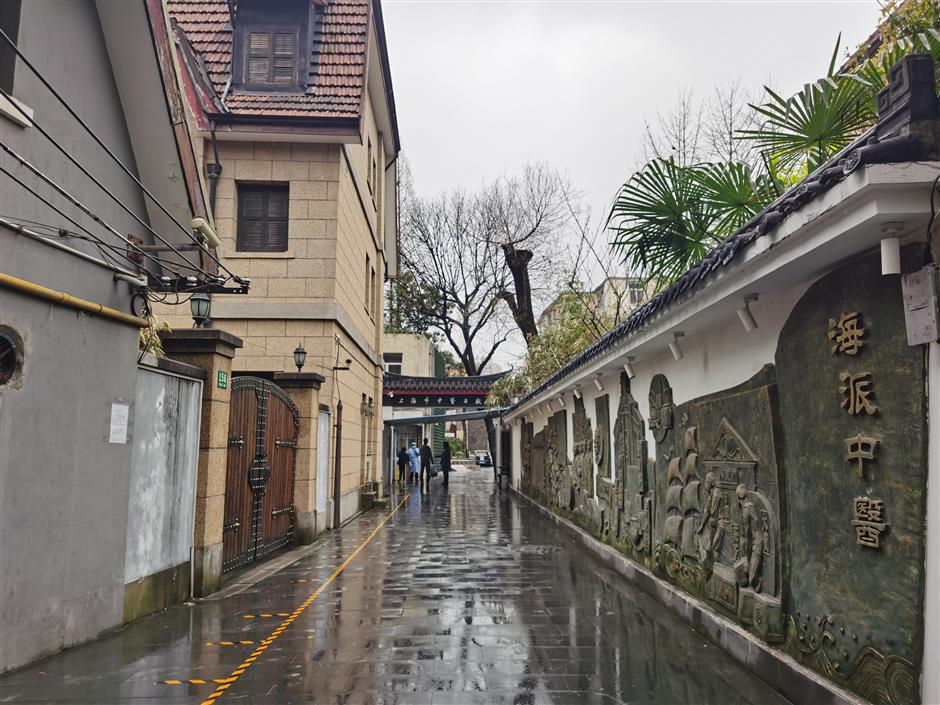 The wall relief (right) of the Shanghai Institute of Traditional Chinese Medicine Literature tells the story of the development of TCM in Shanghai. 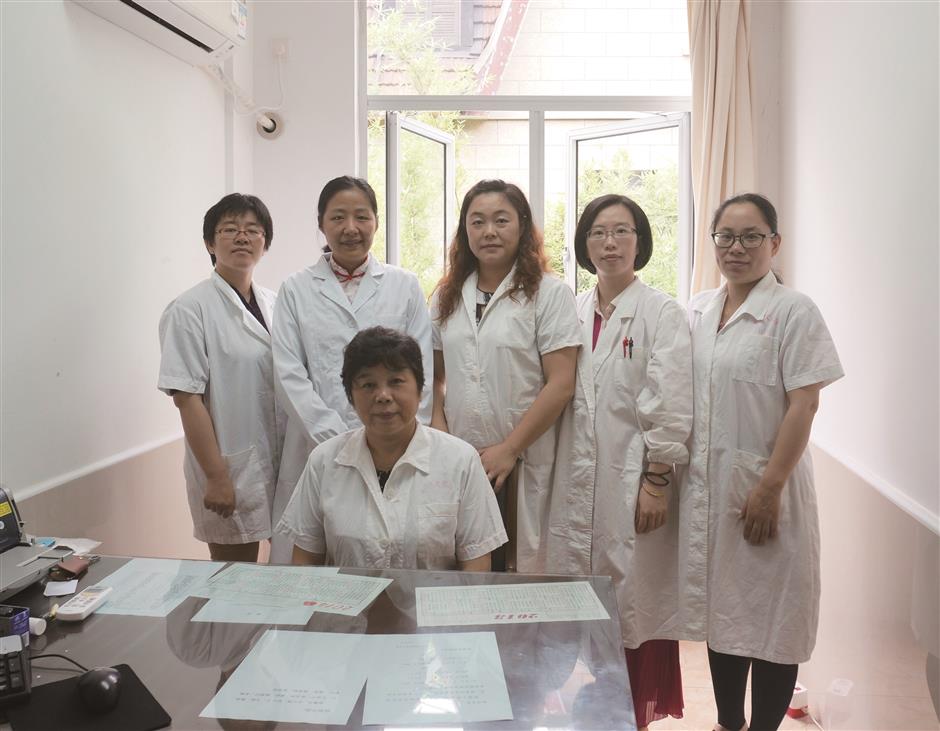 While Western medicine is about science, Chinese medicine is about the art of healing. Practitioners of TCM seek to treat the body as a whole, including the soul or spirit, as an integral part. When the flow of qi is impeded, health problems occur. The treatments aim to restore the balance and help facilitate the body’s own ability to heal itself.

The characteristics of Cai’s clinical practice, according to Huang, are its diagnostic skills and clinical intuition. The body temperature chart not only complements the traditional diagnostic methods like wang (inspection), wen (listening and smelling), wen (inquiry), and qie (taking the pulse), but digs out details of a patient’s diet, preferences and married life.

The 68-year-old Huang is now the head of the eighth generation of Cai’s Gynecology and has been coaching the ninth generation of researchers who are most likely to carry forward the age-old therapy, which was listed as an intangible cultural heritage of Shanghai in 2019, just a year after Cai Xiaosun’s death.

﻿
Special Reports
﻿
TCM therapy that has a generational touch
The timelessness of Varanasi's music comes alive in documentary
Docu series an intimate look at heroes' lives
Buzzword: 撕漫感 manga-ish, cartoonish
Imperial calligrapher with style
Shang explores the matter of life and death
Self-automated art loses none of its fascination over time
A celebration of mudan's place in Chinese culture
From a shed to Buddhist shrine
Wang's creations welcome warm spring in Jiading
EXPLORE SHINE