Artist who wowed the Queen of England

However, the Italian artist’s portrait of Queen Elizabeth II in 1955 was so successful that it won the first place in the competition of the most popular portrait of the Queen in celebration of her 80th birthday in 2006.

Favored both by the public and the Queen herself, this portrait often appears on the banknotes or stamps issued by the British Commonwealth.

Perhaps for most people, this portrait is more famous than the artist himself.

“Stare: Exhibition of Italian Realistic Painter Pietro Annigoni,” running through May 23 at the Shanghai Jiushi Art Museum, would give the public a more intimate approach to the artist and his works.

The exhibition features 53 pieces covering five decades of his art path plus some related documents.

Born in 1910 into an engineer’s family in Milan, Annigoni was admitted to the Florence Academy of Fine Arts at the age of 17, where he thrived in the vigorous and long-established training and nourishment of Florentine culture and artistic tradition.

As a result, he was profoundly influenced by the Florentine School, which has its roots in the Italian Renaissance, and skillfully inherited its distinctive and influential style and aesthetics.

During extensive travels across Europe, Annigoni did not drift with the tide or blindly follow the footsteps of his predecessors.

Instead, he dived deep into his own emotions, life and artistic creation.

He paid equal respect to tradition and to the present in his works, and combines the profundity of classicism, the vitality of romanticism, the freedom of impressionism, and various artistic languages and expressions to depict the most genuine people, objects, scenes and feelings around him.

With the urge to return art to life, he used realism, a movement that emerged in the late Renaissance and lasted over four centuries.

As an artist, Annigoni mastered various drawing techniques and combined them with different painting materials to make art.

Here at the exhibition, visitors will find his works of tempera on panel, ink on paper, water-color on paper, colored pencil and oil paintings.

For example, he used water-color, colored pencil and oil in creating “Joelle (1950),” making a subtle and intricate visual impact.

“Just take a careful look at the girl in the painting, you can find some traces of charcoal pencil depicting her hair,” said Felix Ma, the curator of the exhibition.

“Yet these strokes are so wild and spontaneous, adding vitality and movement to the painting itself.”

When one gazes at his paintings, be it a landscape or a portrait, one sees, under the serene and somewhat indifferent atmosphere, the artist’s sincere and hidden passion.

He studied with a number of renowned Florentine artists in his youth and made acquaintances with scholars and celebrities in various fields, including the writer Renzo Simi, the artist Mario Parri and the historian Carlo Francovich.

The rich and diverse cultural atmosphere directly influenced his artistic interests and laid the foundation for his firm artistic intention, undisturbed by various art movements at the time.

For example, one of the highlights at the exhibition, “Woman with a Pearl Necklace” was created in 1958.

The painting features an elegant middle-aged woman wearing a pearl necklace, silently gazing into the distance with a countryside backdrop. Her pose and facial expression, plus the serene ambience wafting over the canvas are reminiscent of the “Mona Lisa.” 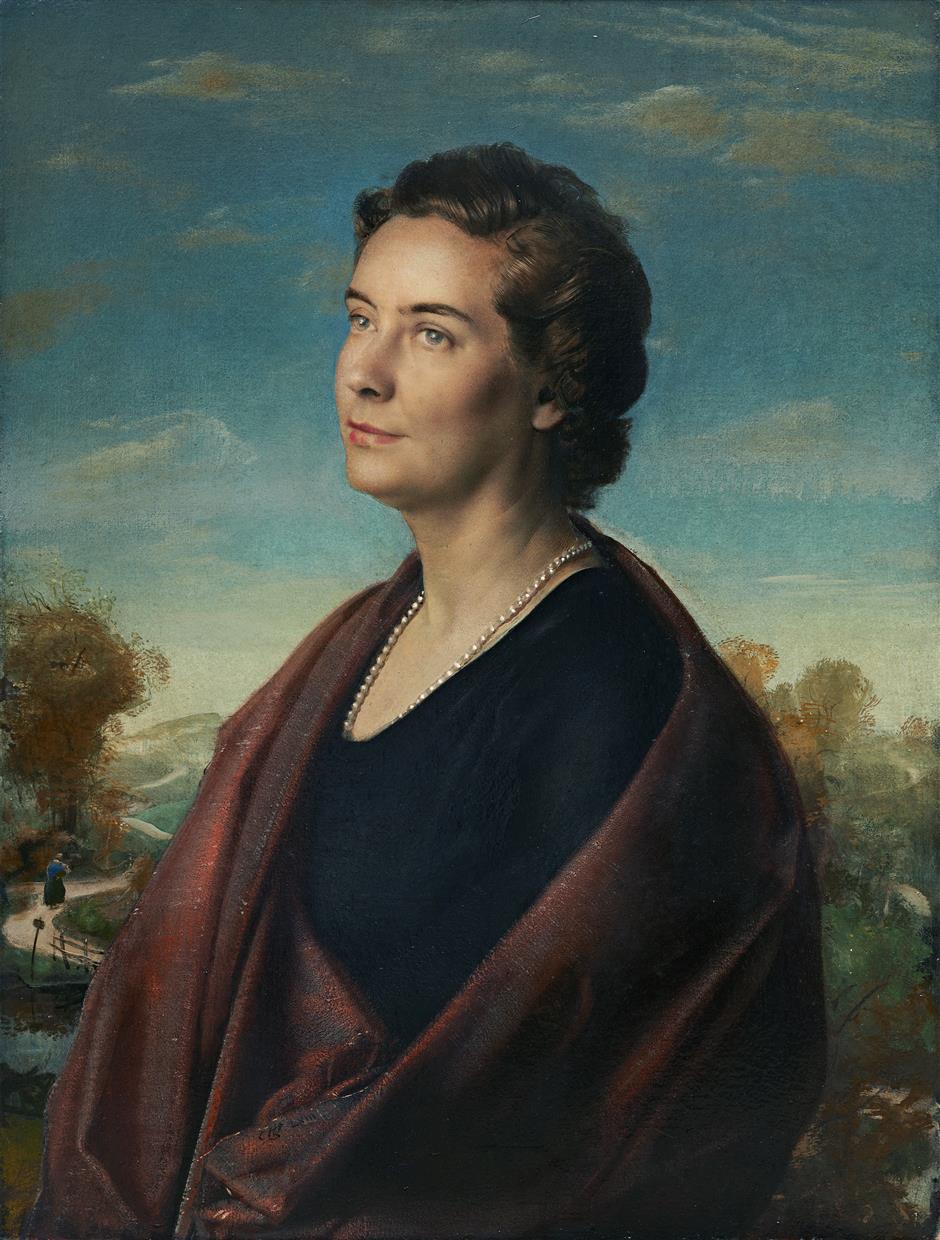 His works are realistic and the compositions are straightforward yet intricate, imposing yet close to life.

The scenes in his works are rarely monumental, but delicacy and preciseness pervade his composition, which are his modern way of dramatizing the scenes.

In fact, the artist’s determination and persistence earned him great acclaim and made him stand out among his peers. He achieved continuous success both within Italy and worldwide.

In 1955, his portrait of Queen Elizabeth II not only pleased the Queen herself but also enabled him, as a foreign artist, to win over the “carping” British audience. In 1969, he painted the Queen for the National Portrait Gallery.

It is a pity that these two portraits are not included in this exhibition.

But visitors will find the detailed documentation, pictures and drafts about these two renowned portraits.

“It is also interesting for the viewers to find the differences between these two portraits,” said Felix Ma.

“If one takes a close look at the pictures of these two portraits, he may find that the backgrounds and atmosphere are different.

“The 1955 portrait starts with the angle of a female, while the 1969 portrait emphasized the role of a politician. The artist successfully achieved in these two styles.”

Apart from his oil paintings and tempera on panel, the exhibition also features some of his sketches. One of the highlights is a piece hanging at a 45 degree tilt with a mirror behind.

Taking a close look, visitors will find another small sketch of the artist himself at the back of the painting reflected from the mirror behind.

It seems that the artist is playing a game with the viewers.

“In one of the portraits, we tried to identify the male figure in it, as we only had a name,” Ma said. “But we searched all the information on the internet, still in vain. However, guess what? Finally we found the answer written at the back of the painting. He was a famous Italian anchor, and this is a commissioned work.” 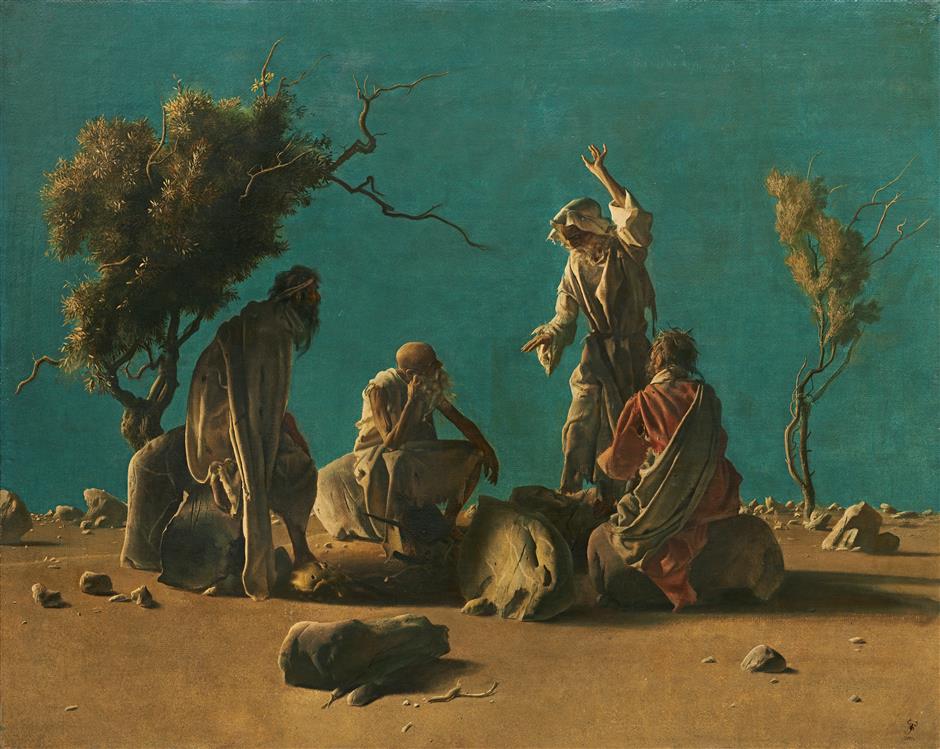 "Anchorites' Party — Anacoletti in the Desert," oil tempera on panel, 1947

Special Reports
ADVERTISEMENT
Artist who wowed the Queen of England
Birds bring forth invisible and irresistible forces
Pondering relationship between fashion, culture and nature
TCM therapy that has a generational touch
The timelessness of Varanasi's music comes alive in documentary
Docu series an intimate look at heroes' lives
Buzzword: 撕漫感 manga-ish, cartoonish
Imperial calligrapher with style
Shang explores the matter of life and death
Self-automated art loses none of its fascination over time
EXPLORE SHINE