Diamond Sutra, the world’s earliest woodblock printed work made in China in AD 868, is believed to have been a breakthrough in human’s printing and communication history.

However, the change of dynasties ruined the industry with few workshops remained. In modern times, however, Hangzhou artist Wei Lizhong has been devoted to the revival of the traditional heritage for the past 30 years. 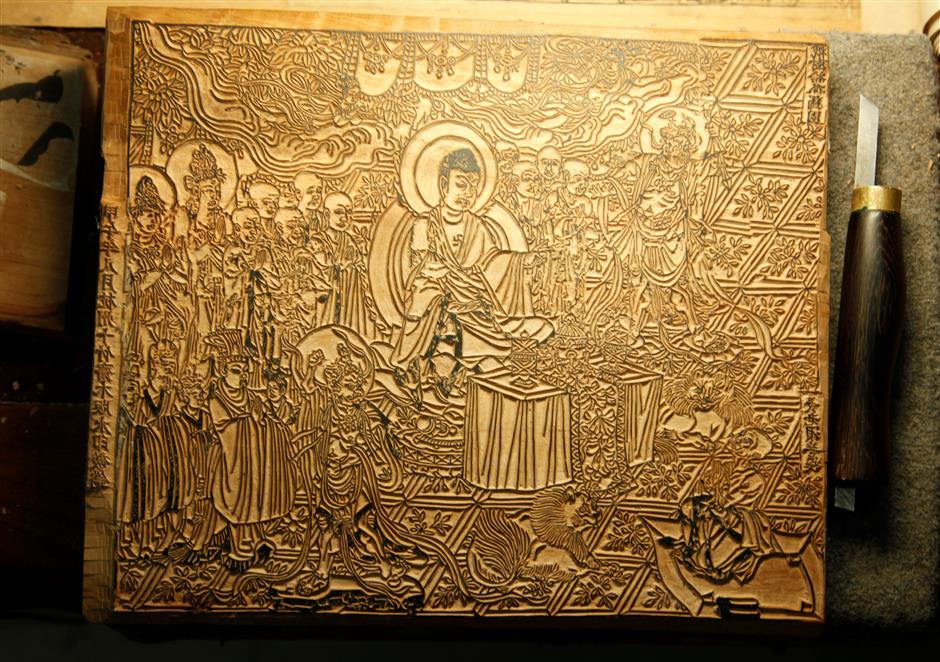 The duplicate of Diamond Sutra, the world’s earliest woodblock printed work made in China in AD 868, made by Wei Lizhong

Wei started carving woodblocks in the 1990s when he was studying art at the China Academy of Art which set up the earliest woodblock printed painting department in modern China.

“I stood on the shoulders of masters, including Zhang Yangxi and Zhang Huaijiang,” Wei said. “Without them, I wouldn’t have been able to enter the world of woodblock printing.”

After reaching its peak during the Ming Dynasty (1368-1644), Chinese watercolor woodblock printing almost disappeared till it was revived in the 1930s when China was torn by war and civil conflict. During that time, artists created works that inspired people to fight invasion and enemies.

At the time, Lu Xun, the leading figure of modern Chinese literature, urged artists to use powerful woodcut print posters to inspire patriotism and a fighting spirit.

Woodblock print master Zhang Yangxi (1912-1964) was one of the most renowned artists, producing hundreds of prints and other works during the War of Resistance against Japanese Aggression (1931-1945).

Zhang set up the woodblock printed painting department at the China Academy of Art in Hangzhou, which heralded a new chapter of education for this traditional art form.

Wei apprenticed under Chen Pinchao who emulated the skills of Zhang in the academy.

In efforts to carry down the cultural heritage, Hangzhou Changjiang Experimental Primary School invited Wei to set up a studio. Every week, he teaches two classes on carving and printing.

“After studying for a year, students can complete a piece of simple work,” Wei said. “That isn’t easy because they must work on tracing, carving, printing and mounting on their own. For instance, the woodblocks are carefully prepared as a mirror-image relief matrix, so the areas showing ‘white’ are cut away, leaving the images or characters to be shown in colors at the original surface level.” 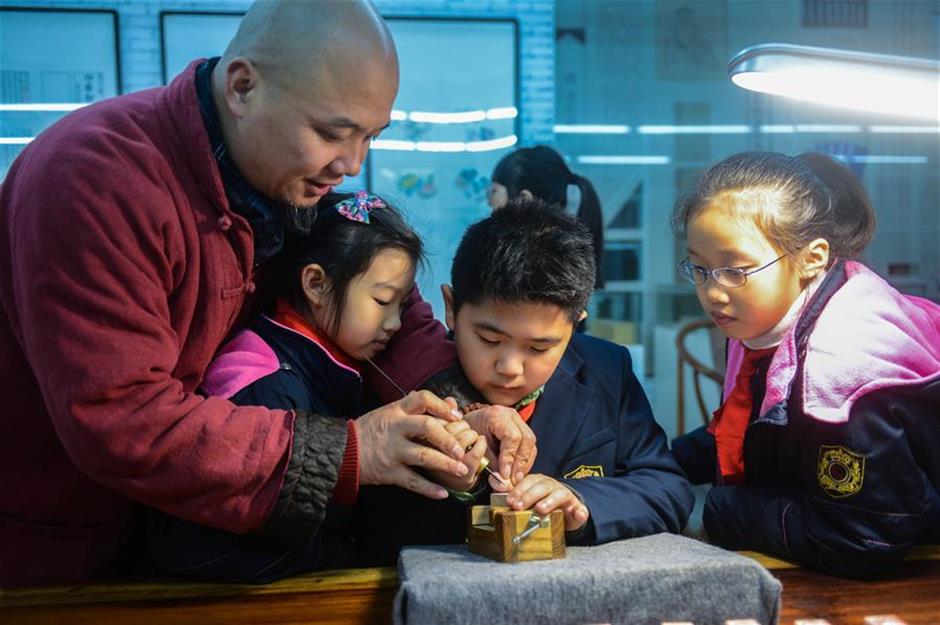 Students observe the guidance of Wei during an art and craft class. Now, Wei teaches two classes on carving and printing at Hangzhou Changjiang Experimental Primary School every week to carry down the cultural heritage.

The traditional technique of creating a multi-colored woodblock print consists of a dozen different procedures.

“The time-consuming process often requires months of polishing,” he said. “The amount of time I spend on a woodblock is five times as much as on an ink-wash painting. That’s why I can only complete five works a year.”

So far, the largest work Wei has ever created is the “Thousand-Hand Thousand-Eye Guanyin,” which took him more than two years to finish. Each color requires its own woodblock, so the number of woodblocks corresponds to the number of applied colors, which can be in the thousands. 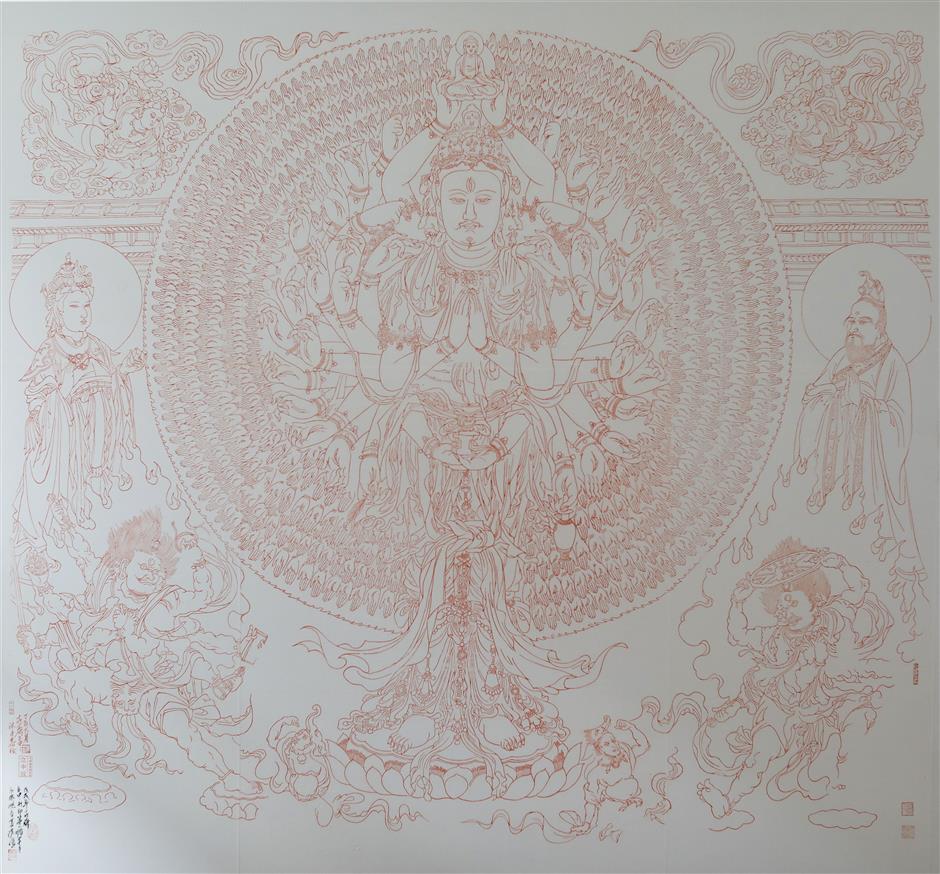 The largest work Wei has ever created is the “Thousand-Hand Thousand-Eye Guanyin,” which took him more than two years to finish.

Wei replicated the Diamond Sutra in 2014. To copy this painting, he traced the origin on a semi-transparent sheet. By gluing the sheet to a woodblock, the pattern was then cut according to the tracing.

In recent years, he has been invited to Belt and Road Initiative countries to give a boost to cultural exchanges between China and other regions.

“When I held lectures or exhibitions in other countries, I always took the Diamond Sutra print,” Wei said. “I hope more people will learn about the ancient printing art of China.”

In 2019, the British Library collected one of his prints “Yi Tuan He Qi,” which means harmony in Chinese. It was a copy of the original painting by Emperor Xianzong (1447-1487) of the Ming Dynasty. It portrays Tao Yuanming, Lu Xiujing and Hui Yuan embracing each other. 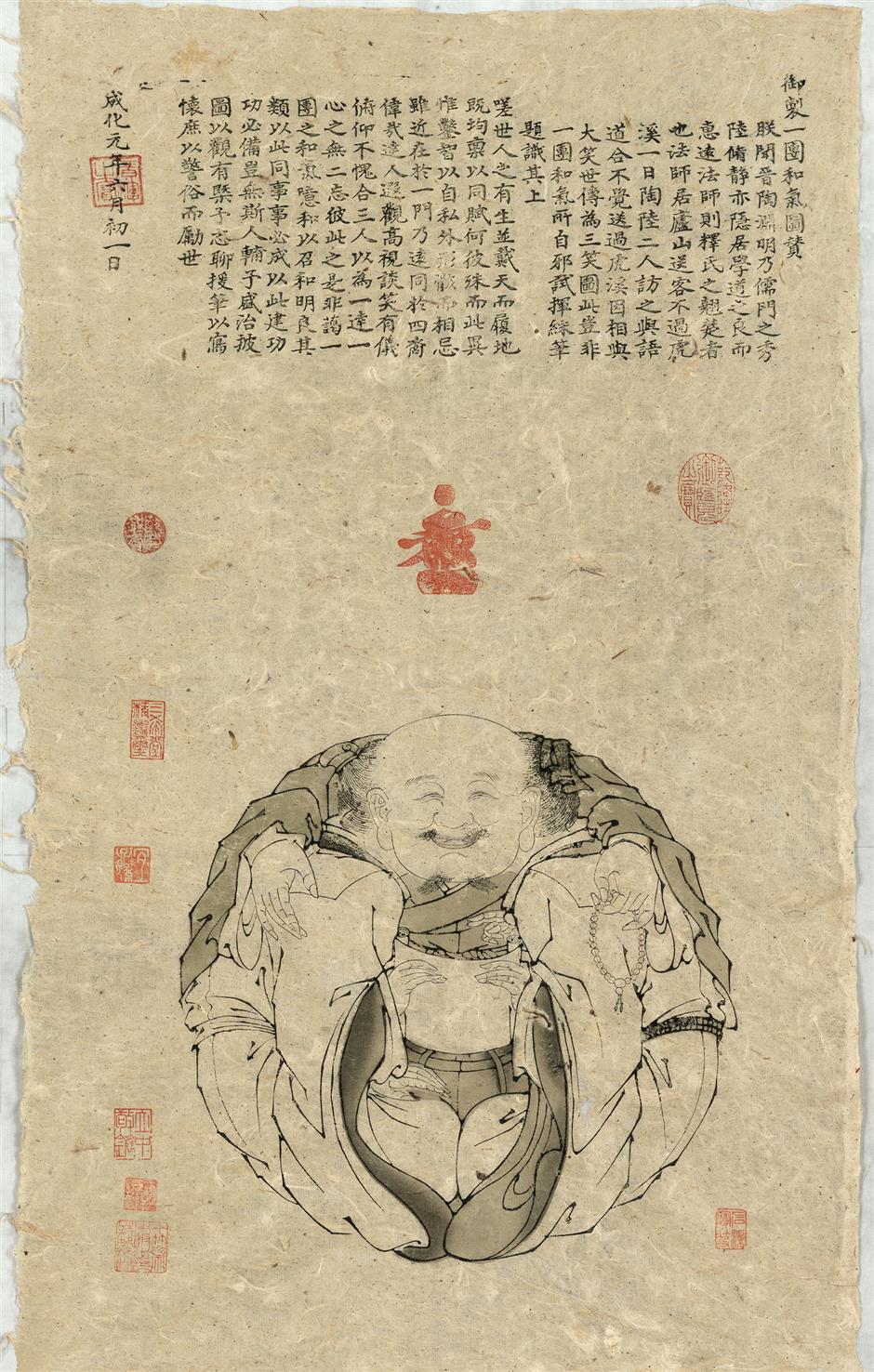 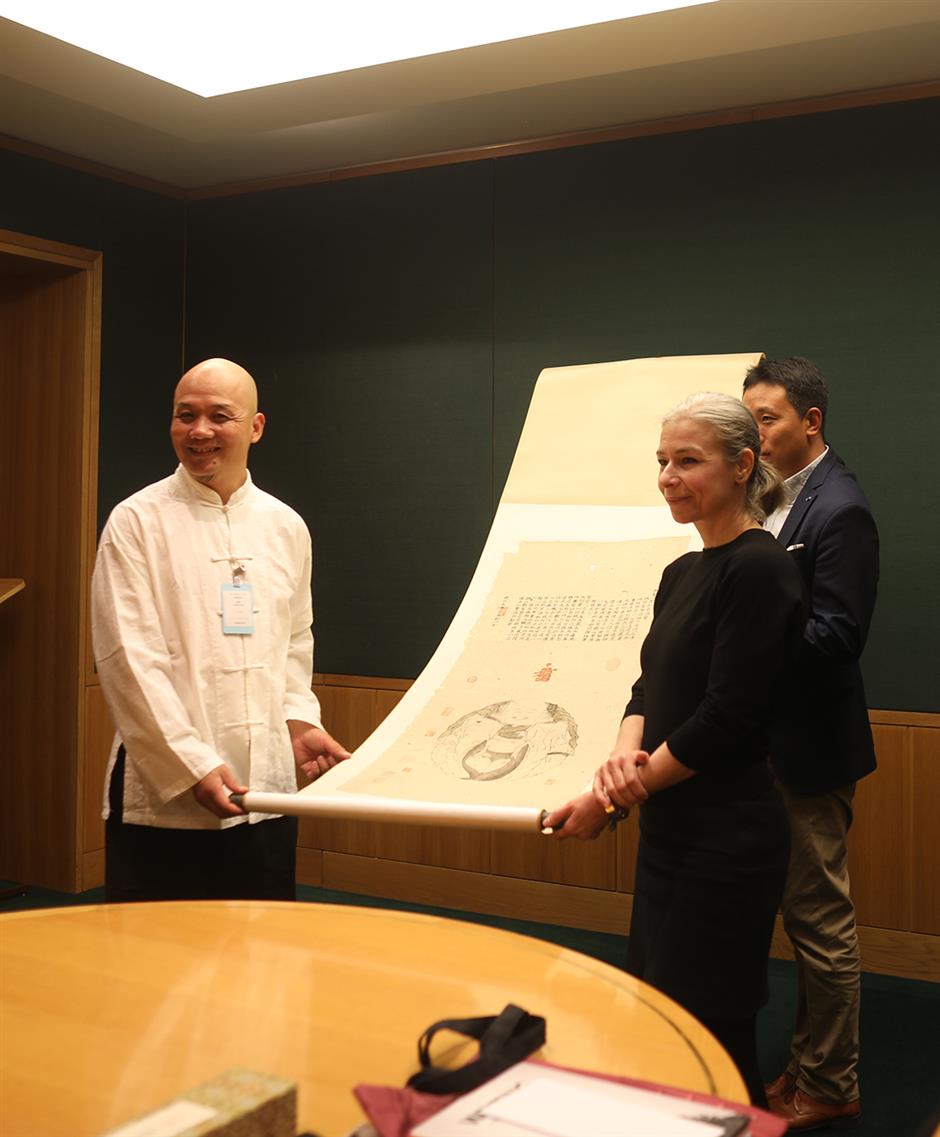 Wei’s print “Yi Tuan He Qi,” which means harmony in Chinese, was collected by the British Library in 2019.

“This painting reflects traditional Chinese culture and the idea of syncretism of three teachings, including Confucianism, Taoism and Buddhism,” Wei said. “It corresponds with China’s modern-day harmonious mainstream society.”

In 2001, Wei revived the century-old Shizhuzhai Workshop to spread the cultural heritage. During the Ming Dynasty, scholar Hu Zhengyan established the workshop in Nanjing, Jiangsu Province, producing a series of popular books that epitomized the heyday of colorful woodblock printing.

“The workshop disappeared in history, but the printing techniques have remained in Hangzhou,” Wei said. “I rebuilt the brand to hand down the craft to the younger generation.” Wei (middle) teachers an expat visitor how to use the tool to carve a woodblock printed work.