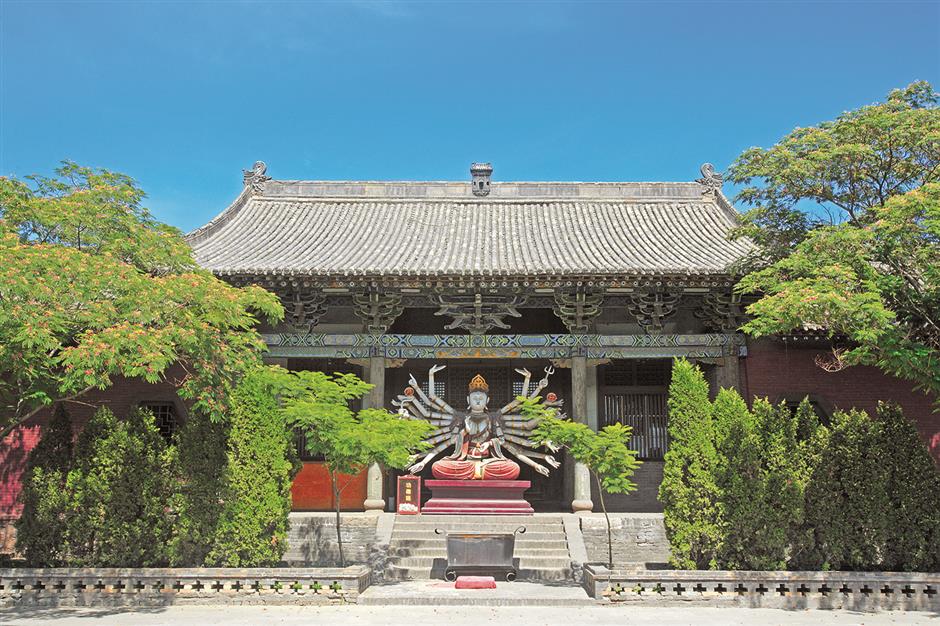 Easy to get and low in cost, clay replaced materials such as stone and metal in the Ming Dynasty (1368-1644) to become a top choice for sculpting in Buddhist temples. The Shuanglin Temple in the southwest of the Pingyao Old City in Shanxi Province fully deserves the title of “the world’s best colored clay sculpture museum.”

From the smallest at just 30 centimeters high to the tallest at more than 3 meters, the Buddha and heavenly warrior sculptures in the temple is a pinnacle in the history of Chinese colored clay sculptures.

They sit, sleep, crouch and squat on the walls, the ceilings, the pillars or the high platforms. They wear long, loose robes in gorgeous headwear, or rigid armor with various weapons. There are 2,000 Buddhist, Taoist and Confucian statues in 10 halls.

If a regular statue of Buddha in other temples can be compared to a standard ID photo, the sculptures in Shuanglin Temple could be seen as the Instagram posts that show your personality and life stories with more fun, making the solemn and sacred Buddhist themes diverse and interesting, as well as showcasing the superb skills of the craftsmen and the artistic appeal of clay sculptures.

The statue of Bodhisattva Weituo in the Thousand Buddhas Hall is definitely the cover photo.

About 1.6 meters high, the Buddha in a full armor holds a vajra weapon in the left hand and clenches the right fist.

Standing on a T-shaped step with his head held high, Weituo shows an upright and stern attitude with the furrowed brows and glaring eyes.

The craftsman handled his armor and the streamers of the battle robe in a very delicate way. The rough, rigid texture of the armor is sharply contrasted to the soft, tender flying streamers.

The portrait of Weituo is well-exaggerated with the whole body in a twisted posture. His elbow is stretching out, which depicts the image’s mighty bravery and a sense of anger with pride.

There was once another statue of Yecha Buddha opposite Weituo, but it was stolen, and its whereabouts are unknown.

There are more than 500 Buddha statues in this hall, some riding auspicious clouds and some sitting on the back of animals.

More than 30 statues of donors during the Ming Dynasty are aligned at the two sides of the door.

The Hall of Heavenly Kings features 15 statues inside and four outside. They sit or stand, and some are served by goblins at their feet.

One heavenly king with a fat belly has to tie his trousers just under the nipples, while anther is rolling his eyes, nose in the air, half-naked.

In the back wall of the hall, a Guanyin Buddha was carved to be riding on a monster in the roaring waves across the stormy sea.

He droops one leg and puts another on the back of the animal, perfectly calm and collected.

The Hall of Shijia is a room of hanging statues on the four walls.

A total of 48 sets of sculptures tell the story of how the religion’s founder Sakyamuni was born, died and got his nirvana and rebirth to become a Buddha.

More than 200 characters with different postures in varied costumes were sculpted shuttling back and forth among the buildings.

The Hall of the Buddhas sits in the west of the temple and is a shrine to warrior spirit of Guanyin of a thousand hands and a thousand eyes, surrounded by more than 400 small Buddhas, standing on colored clouds.

Almost every Buddhist temple has an Arhat Hall, and Shuanglin Temple is no exception. Here, there are the 18 arhats of the Ming version. Lifesize, they guard the two sides of the Guanyin Buddha.

With accurate proportions and anatomy, the arhats are full of vigor and personality with varied facial expressions.

One big difference that makes this hall stand out from others is these arhats are separated by wooden niches with complicated woodcarving.

Special Reports
ADVERTISEMENT
61865
,
A sacred monument to the past and the art of sculpting with clay
The signs are there, if you just look
Hangzhou artist reviving ancient woodblock printing
Artist who wowed the Queen of England
Birds bring forth invisible and irresistible forces
Pondering relationship between fashion, culture and nature
TCM therapy that has a generational touch
The timelessness of Varanasi's music comes alive in documentary
Docu series an intimate look at heroes' lives
Buzzword: 撕漫感 manga-ish, cartoonish
EXPLORE SHINE