The Hani people, one of China’s 56 ethnic groups, are prevalent in Honghe Prefecture, Yunnan Province. For centuries, the group has been famous for carving terraces at high altitudes and growing red rice.

The Honghe Hani rice terraces were listed as the World Cultural Heritage in 2013. Today, the undulating fields are considered emblematic of this ethnic group and have allured tourists from home and abroad for many years.

In addition to unique landscapes, the Hani are renowned for their ornate clothing and accessories. Without a written language of their own, they decorated clothing with symbols, motifs, patterns and colors as a way to hand down history, emotions and myths.

An exhibition at the China National Silk Museum displays authentic Hani costumes and accessories on loan from the Museum of Honghe and Yunnan Provincial Museum through June 6. Visitors can learn about the harmonious relationships between nature and the Hani through the lenses of anthropology and philosophy. 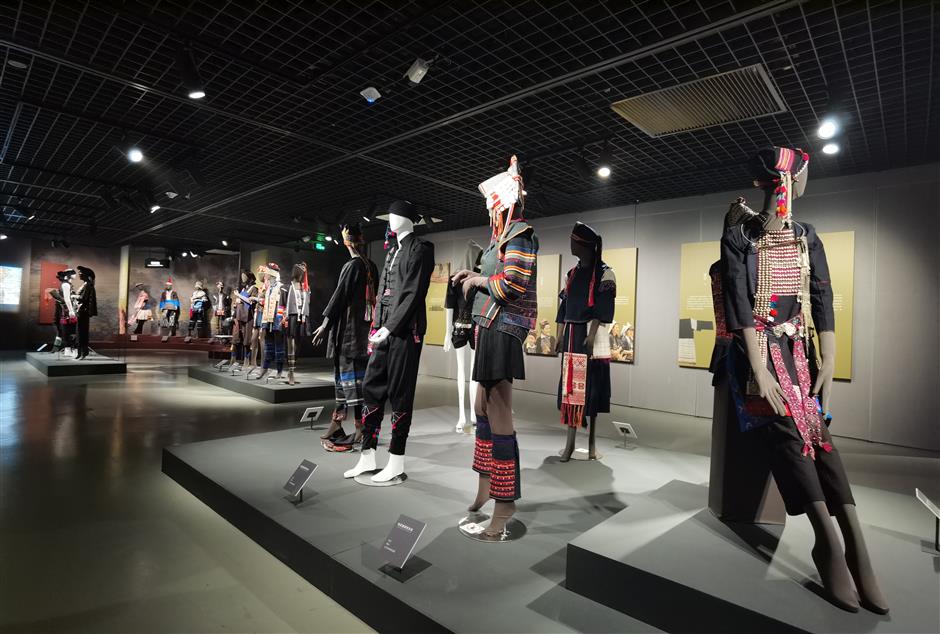 Authentic Hani costumes and accessories are on display showing the harmonious relationships between the nature and the Hani through the lenses of anthropology and philosophy at the China National Silk Museum through June 6.

Due to their long history of migration, the Hani are divided into 30 groups across Yunnan Province. The costumes and accessories on display are primarily found along the Honghe and Lancang rivers and Ailao and Wuliang mountains.

Hani-style coats feature their legend of the origin of human beings. They believe the Goddess Pipimiyi (陂皮密依) used three red stones to create the sky and rubbed three black stones to create the land. As such, the two colors dominate their costumes which can be seen in the exhibit.

The Hani believe black is a protective color that wards off evil spirits and safeguards offspring. Red represents the sun and fire, symbolizing vibrant energy, hope and brightness. White is also commonly seen in their clothing, as it stands for peace in the Hani culture.

Fish and butterflies are common totems associated with life according to Hani legends. One silver necklace in the exhibition depicts these animals coming together to incubate humans.

In the Hani culture, fish gave birth to everything in the world. Throughout the centuries, they carved auspicious fish patterns on silver accessories and embroidered them on dresses as a way of praying to gods for blessings. They all can be seen in the exhibition. 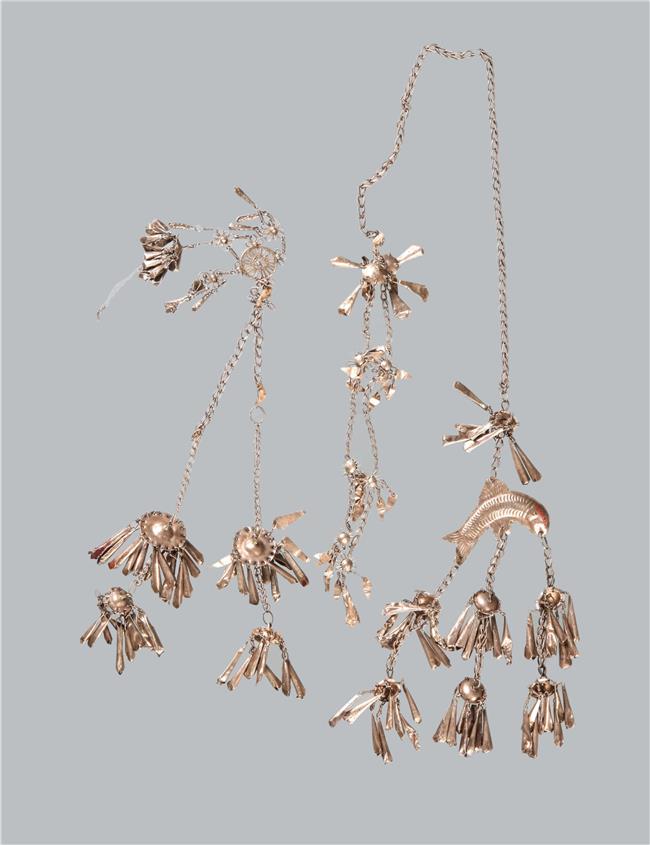 A set of intricate silver pedants used to decorate a dress. 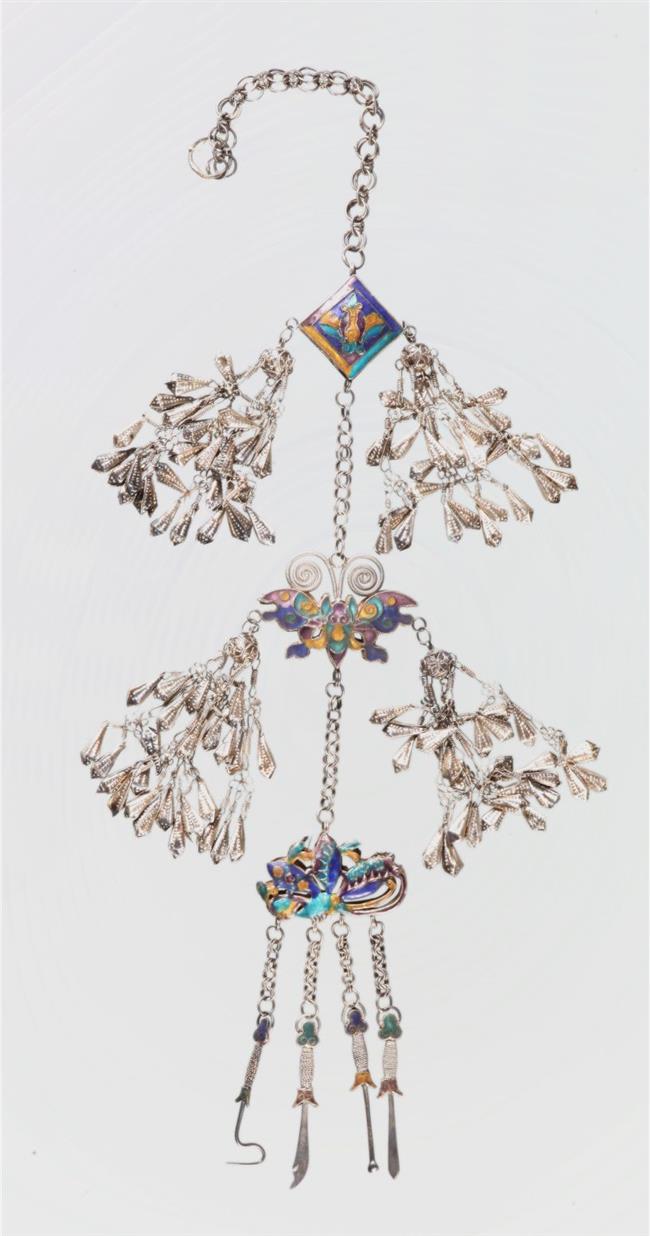 A piece of silver adornments on clothes

The sun and moon are also common motifs on coats, as the Hani considered them the supreme powers that everything in nature depends on, typified by a waistcoat on display decorated with silver moon-shaped panels.

A bridal dress decorated with symbols, motifs, patterns and colors.

For wedding ceremonies, butterflies and flowers are often carved on tokens of love. The Hani think their homeland is home to flowers and butterflies, which symbolize happiness and pure love in marriage. Such motifs also appear on traditional bridal dresses.

For funerals, people wear wuba (吴芭) hats, as the Hani believe it can lead dead people to the afterlife. The hat is adorned with red patterns for the gods and black patterns for the homeland.The blue and white embroidery represents a peaceful afterlife. 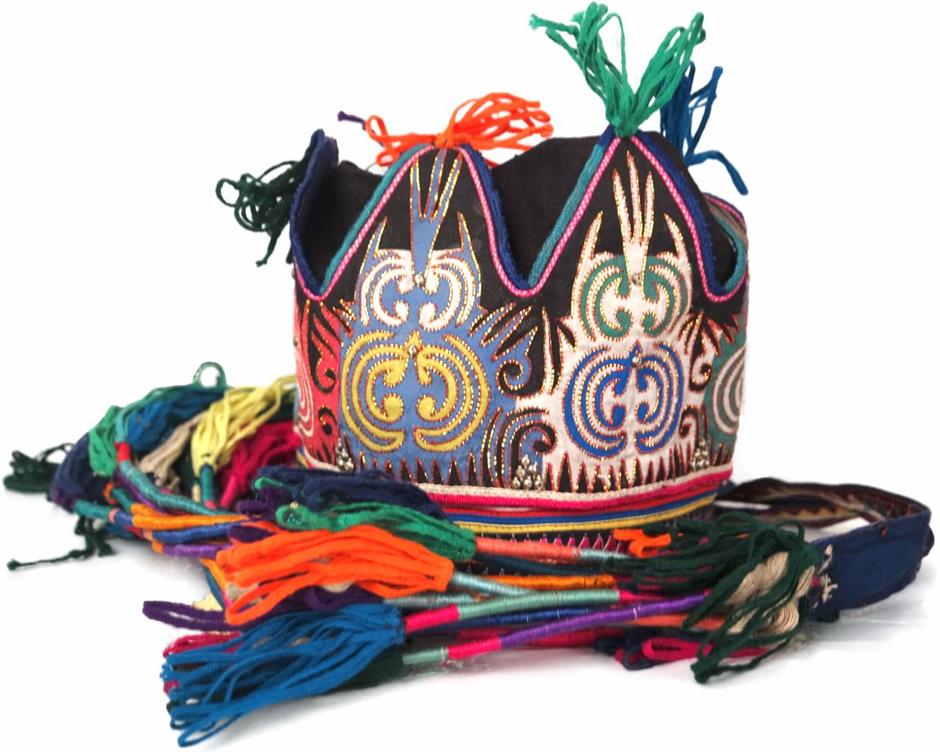 Showcased is a wuba hat which is worn for funerals, as the Hani believe it can lead dead people to the afterlife.

If there is one easy way to differentiate minorities in China — including the Hani — from the Han majority, it is the prevalence of silver worn by women and children.

The exhibition also includes a rare set of jackets, pants and boots made of tree bark. About 1,000 years ago, Hani ancestors peeled bark from trees and processed it into soft materials to make clothes.

Though Hani people no longer wear bark clothing in modern days, it is still taken as a living proof of their forefathers’ ingenuity.

Date: Through June 6, closed on Mondays

﻿
Special Reports
﻿
61761
,
Exploring Hani culture through decorated clothing
A sacred monument to the past and the art of sculpting with clay
The signs are there, if you just look
Hangzhou artist reviving ancient woodblock printing
Artist who wowed the Queen of England
Birds bring forth invisible and irresistible forces
Pondering relationship between fashion, culture and nature
TCM therapy that has a generational touch
The timelessness of Varanasi's music comes alive in documentary
Docu series an intimate look at heroes' lives
EXPLORE SHINE