"Romance of the Western Chamber,” written by Yuan Dynasty (1271-1368) playwright Wang Shifu, was an adaptation of a 12th-century epic love story.

Young scholar Zhang Sheng and Cui Yingying, daughter of a court minister, fall in love after a chance meeting in the Pujiu Temple garden in Shanxi Province. Because Cui is under the watchful eye of her mother, Zhang is reduced to expressing his love by reading aloud a poem outside the wall of the temple.

However, a traitorous military officer named Sun Feihu hears that the minister’s beautiful daughter Cui in the temple. He leads 5,000 of his soldiers to besiege the site and seize her, so that he can make her his consort.

In despair, Cui’s mother announces that anyone who can defeat Sun will win the hand of her daughter, along with a generous dowry.

The scholar Zhang writes a letter to his friend General Bai Ma, asking for his help. After a fierce battle in the temple, Bai finally defeats Sun and saves the young maiden.

Zhang proposes marriage to Cui, but her mother reneges on her promise, saying that the scholar is not good enough for her daughter.

“If you could rank first in the imperial examination,” she tells him. “I’ll let you marry my daughter.”

In ancient China, excellence in the exam guaranteed a high-ranking post in the imperial court.

After a heartbreaking farewell with Cui, Zhang heads to the capital to take the exam.

Zheng Heng, Cui’s elder cousin and son of a high-ranking official, is also courting Cui and maliciously tells her that Zhang has married in the capital and won’t be returning to her.

As the heartbroken Cui is about to accept the liar’s marriage proposal, Zhang, who came out tops in the exam, rushes back to her. In the end, she marries the brilliant young scholar and the couple marry and live happily ever after.

Cui’s maid Hongniang is a key figure in the story. She was a go-between allowing them to secretly meet in Zhang’s house. To some extent, she is the voice of the playwright.

The play was adapted to Kunqu Opera, and had a great impact on Tang Xianzu (1550-1616), who wrote “Peony Pavilion,” one of the most enduring classics in the Chinese opera repertory.

After the Qing Dynasty (1644-1911), “Romance of the Western Chamber” was translated into several languages and came to be regarded as a world great in literature.

As the most popular love comedy in China, it is still actively performed on contemporary stages. It has also been adapted to musicals, films and TV series.

The maid Hongniang came to symbolize a matchmaker in Chinese culture.

The play is an amplified zaju, a once popular theatrical form during the Yuan Dynasty. Wang innovated on the form, giving singing parts to all, instead of only one, of the important characters. 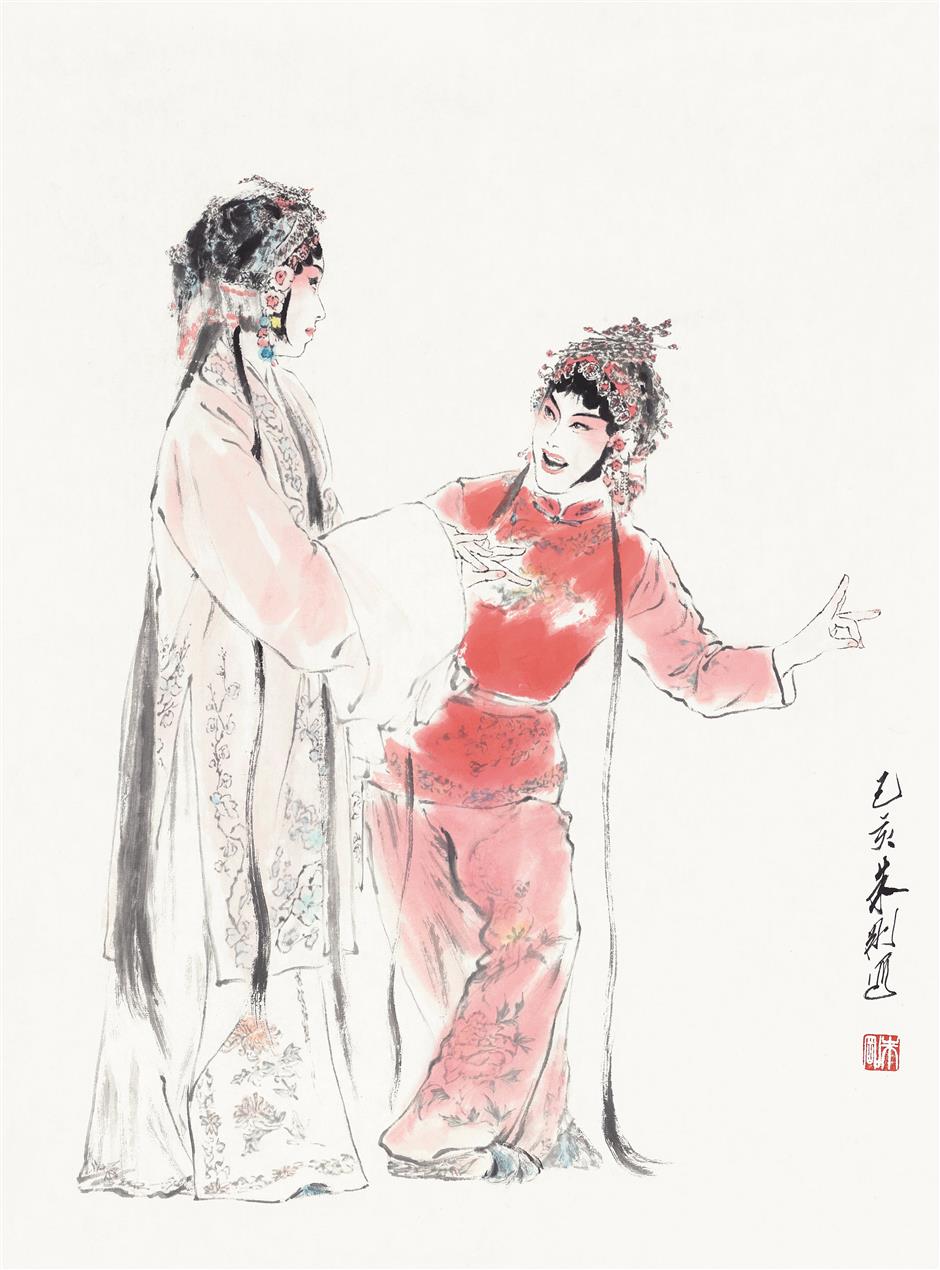 Zhu Gang‘s painting captures a moment between the heroine Cui Yingying (left) and her maid Hongniang.

In his painting derived from the play, entitled “Nuptial Day of the Western Chamber,” artist Zhu Gang sketches out the characters by focusing on their postures and facial expressions.

With clean lines, elegant colors and a simple setting, Zhu emphasizes the faces and eyes to capture the very moments that shed light on the characters’ inner souls.

Under his brush, the maid Hongniang emerges as sincere and forthright — brave enough to circumvent the desires of Cui’s mother. Cui appears uncompromising through her sturdy gaze.

“Chinese painting pursues unity of form and spirit, and the latter always comes first,” Zhu said. “You cannot only draw what you see. A painter should be able to grasp the movement and posture of characters.”

Chinese calligraphy is governed by the rule of “working out the artwork before putting pen to paper.” That is the same with opera painting.

“It is all based on a painter’s thorough understanding of a play, its plots and its characters,” Zhu said.

﻿
Special Reports
﻿
61945
,
In popular ancient story, love triumphs
Blurred visions and new juxtaposed against old
Hermit artist shares his 'quiet fervency'
City volunteers inspire rural children's art dream
Deep questions about life in a time of turbulence
Exploring Hani culture through decorated clothing
More than just pretty pictures: Learning new ways we can harness art for healing
A sacred monument to the past and the art of sculpting with clay
The signs are there, if you just look
Hangzhou artist reviving ancient woodblock printing
EXPLORE SHINE