The National Center for the Performing Arts Orchestra chose Verdi opera excerpts and a Bruckner symphony for its debut in Shanghai last week.

The orchestra, established in 2010, is well-known for overseas tours but rarely appears domestically outside its resident city of Beijing.

“We have been a very homebound orchestra,” Ren Xiaolong, general manager of the NCPA Orchestra, told Shanghai Daily, referring to the coronavirus pandemic. “But we plan to make national tours an annual practice starting from this year, to bring quality music to more mainland cities.”

The performance here, at the Shanghai Oriental Art Center, was the second stop of a six-city tour. It was entitled “Travel and Reunion.”

In the second half of the concert, the orchestra performed Bruckner’s “Symphony No. 6,” under the baton of conductor Lu Jia, who is also music director of the orchestra.

This year marks the 125th anniversary of Anton Bruckner’s death. Lu, a Shanghai native and Bruckner fan, said the sixth symphony is the Austrian composer’s “most complex and best-quality” work.

“We experience the mystery of mathematics in Bach’s works; we see the charm of a child prodigy in Mozart’s works; we hear the greatness of heroes in Beethoven’s composition,” he said, “but in Bruckner’s works, we open up ourselves and get close to the sky, the earth and nature, and confront ourselves.” 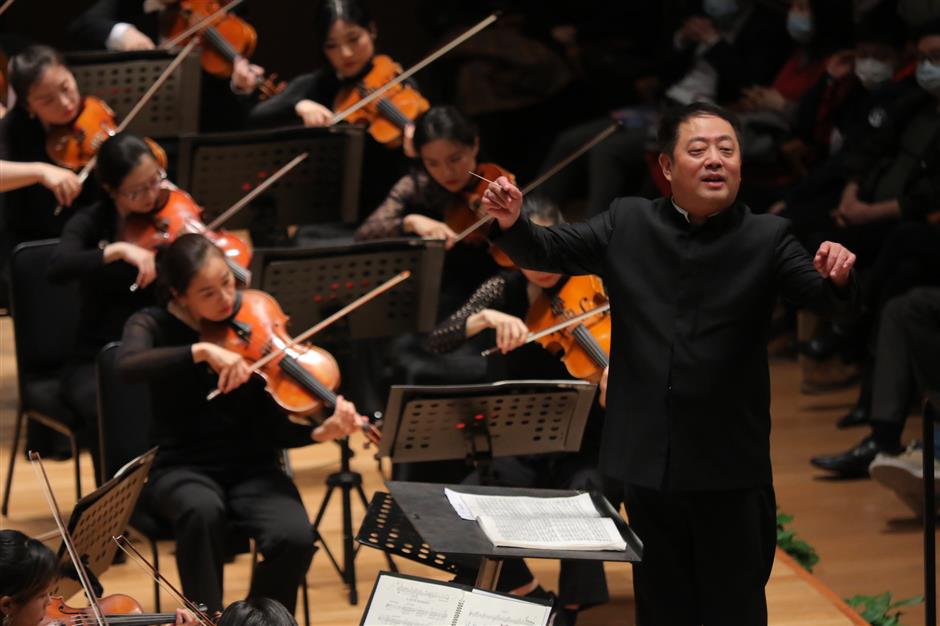 Bruckner’s work has unusual tempo and reserved rhythm, which convey the inner piety of the composer. Lu is considered adept at balancing the contrast of brightness and darkness, showcasing unhurried excitement, solemnity, tranquility and delicate seriousness in Bruckner’s music.

Lu became the orchestra’s chief conductor in 2012, and was named music director five years later. He is praised for the orchestra’s ability to play both operatic and symphonic works.

When the orchestra was first established, it mainly played operatic works, according to orchestra manager Ren. Then, after three years, it started to program more symphonic works in its regular seasons, presenting some 70 operas and 30 symphony concerts a year.

Lu said the orchestra’s long experience with operatic works familiarized musicians with the intricacies of vocal artistry, giving them valuable insights when performing symphonies that include soloists, ensembles or choruses.

“We have been trying to balance the number of opera and symphony performances,” said Ren. “If it were not for the COVID-19 pandemic, we would have performed 45 operas and 55 symphonic concerts last year.”

He said the orchestra prefers to pick its venues and programs rather than perform for “commercial” shows, like a computer game-themed concert or a concert to mark the anniversary of some private entity. It rarely does the latter, he said.

The average age of orchestra musicians is about 34, making it a rather youthful orchestra.

Ren said the orchestra is committed to taking high-quality music beyond major metropolises to smaller cities in China.

“We have witnessed the emergence of a lot of new venues in the past two decades,” he said. “The ‘hardware’ is there, but the quality of ‘software’ may be lacking.”

He added: “Given the absence of good local orchestras in some cities, we, as a national-level orchestra, are responsible for communicating with audiences in those cities.”

In addition to its first stop in Nanjing, the orchestra’s maiden national tour will also perform in Wuhan, Changsha, Shenzhen and Guangzhou.

﻿
Special Reports
﻿
Dual artistry of operatic, symphonic works
In popular ancient story, love triumphs
Blurred visions and new juxtaposed against old
Hermit artist shares his 'quiet fervency'
City volunteers inspire rural children's art dream
Deep questions about life in a time of turbulence
Exploring Hani culture through decorated clothing
More than just pretty pictures: Learning new ways we can harness art for healing
A sacred monument to the past and the art of sculpting with clay
The signs are there, if you just look
EXPLORE SHINE