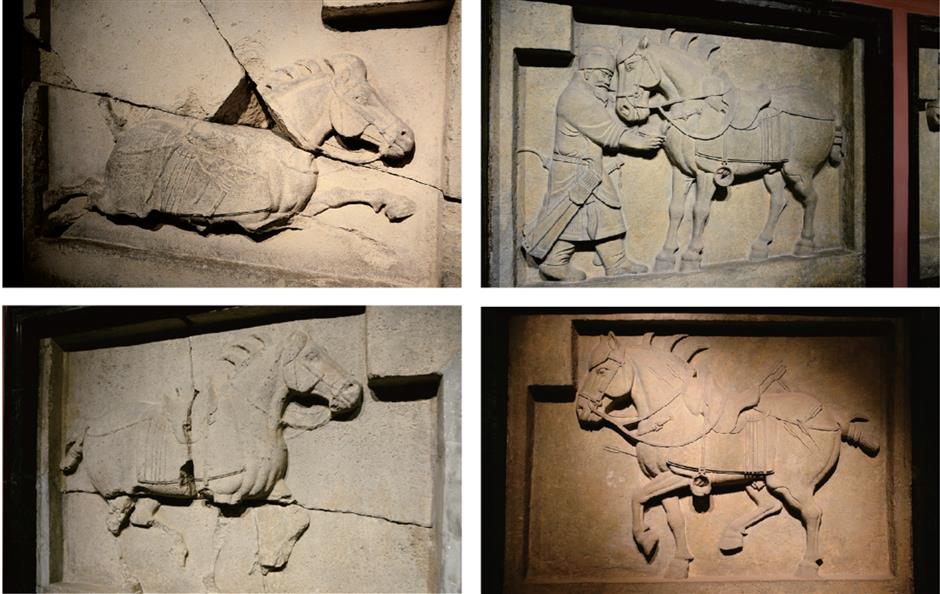 The second ruler of the prosperous Tang, Li fought against the invading Turkic tribes after joining the army at 16, defeating the armies of the collapsing Sui Dynasty (AD 581-618), and later crushed warlords to unify the country.

To commemorate his illustrious war horses, Li commissioned royal artist Yan Liwen and his brother, royal craftsman Yan Lide, to make a set of relief sculptures modelled on the horses.

In AD 636, a total of six horse relief sculptures, each measuring 2.05 meters by 1.71 meters, adorned the corridors on both sides inside the emperor’s mausoleum, leading all the way to the altar.

The set, commonly known as “Zhaoling Liujun,” is among the many exquisite cultural relics excavated from Zhaoling Mausoleum, in the today’s Xianyang City in northwestern Shaanxi Province.

A vivid portrayal of some of the emperor’s favorite battlefield companions, the sculpture set excels in capturing the dynamic details, such as dilated nostrils, standing hair on the necks, bulging muscles and layers of saddle and girth. Each piece is entitled with the name of the horse, along with a eulogy penned by the emperor himself and written by renowned calligrapher Ouyang Xun.

Among the whole set, the horse Salu Zi stands out, depicting a warm-hearted scene between man and horse. Standing still, the horse snuggles up against a warrior who is treating the wound on its chest.

Records show that in a crucial battle in AD 621, the bay horse, with shades of purple, managed to take Li out of a close fight, despite arrows to its chest.

Quanmao Gua is a horse with whirling yellowish hair and a black mouth. It was Li’s ride in AD 622 when fighting against a warlord in today’s Hebei Province. The sculpture shows the injured horse in a steady trot, with six arrows in its back and three in its chest, indicating the ferocity of the battle.

Another trotting horse is named Teqin Biao, a whitish yellow horse that Li rode to put down the rebellions in the early years of his reign.

The other three galloping horses featured in the sculptures are Qing Zhui, a speckled white, fast horse which Li compared to “a flash of lightening;” Shifa Chi, a Persian red horse, with five arrows in its rump; and Baiti Wu, a black horse with white hooves.

In 1915, the best two relief sculptures of this set, Salu Zi and Quanmao Gua, were smuggled out of country. They were later sold for US$125,000 to the then-director of the University of Pennsylvania Museum of Archeology and Anthropology.

According to the Zhaoling Museum, citing archives from Shanghai Museum, the theft of the treasured pieces was ordered by notorious antique smuggler Lu Qinzhai and covered up by then Shaanxi military governor Lu Jianzhang.

To make it easier to carry, the smugglers even cut the sculptures into several parts.

In 1918, the remaining four pieces were also stolen. Likewise, they were cut up for transportation. Fortunately, before the cargo ship made it to the pier in Tongguan, a gateway town in Shaanxi, the smuggling was quietly intercepted by several vigilant boatmen. Taking their chance while uploading the supplies, they secretly swapped the stolen sculptures and buried them under water.

Two years later, when patriotic general Feng Yuxiang regained the military governance of the province, the boatmen told him the whereabouts of the sculptures.

Feng then had the relics dragged out and placed them in the Xi’an Library. Today, the four pieces are preserved at the Forest of Stone Stelae Museum in Xi’an, along with replicas of the other two. They are listed as treasured cultural relics prohibited from overseas exhibition by the National Cultural Heritage Administration.

However, the original sculptures of Salu Zi and Quanmao Gua are still displayed at Penn Museum, as it declares that the items are acquired through proper channels.

Earlier in 2017, the Zhaoling Museum openly demanded the return of the two horse relief sculptures, which Penn Museum didn’t reply.