The knead to keep an ancient folk art alive

It’s 10 in the morning. Tang Jian, 37, walks into her office holding a large pot containing pieces of steaming dough. No, it’s not her breakfast. It’s the material used to create art.

“The dough is mainly made of wheat starch, glutinous rice flour and honey,” says Tang, a craftswoman of dough sculpture. “The proportion used is a secret, known only to those of us who are inheritors of the craft.”

Deftly stretching and kneading, she prepares the dough to make a child holding a big red carp. 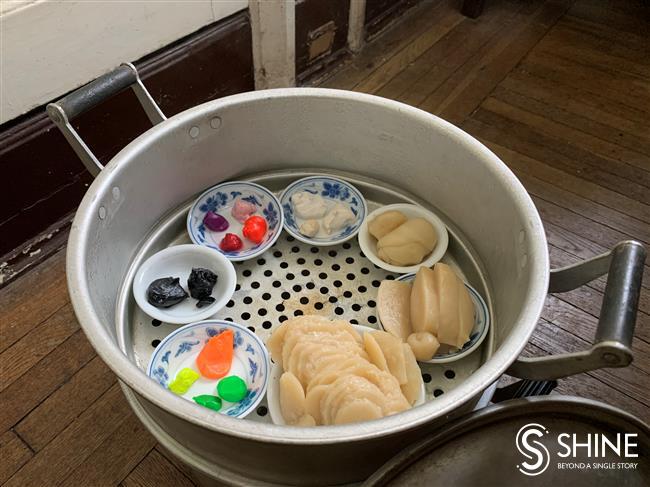 According to Tang, the folk art of dough sculpture can be traced back some 1,300 years. Remnants have been unearthed from Tang Dynasty (AD 618-907) tombs in Astana in the Xinjiang Uygur Autonomous Region of far northwestern China.

Figures made of dough once thrived in northern China, serving as offerings in religious rituals and as wedding gifts.

In the 1920s, the arrival of a group of dough craftsmen — including Pan Shuhua from Tianjin and the brothers Li Junxing and Li Junfu from Shandong Province — brought the folk art to Shanghai.

Having low social status, the craftsmen were forced to sell their works on the streets. They were often followed around by curious children. At that time, dough sculpture was regarded as kitsch rather than as art.

During his early years in the city, Zhao operated like other dough sculpture craftsmen, carrying a box on his back and wandering through the back lanes of the city, making sculptures on demand. He told interesting stories to attract buyers.

Zhao then set up a stall at Yuyuan Garden, which enhanced the profile of his artworks. He later went on to become deputy director of the Shanghai Arts and Crafts Research Office in 1956.

His works mainly featured characters out of Chinese traditional opera, people from ethnic minority groups and mythological creatures. A fan of Peking Opera, he often took dough to the theater and molded the figures presented on the stage while watching a performance.

One day, the former president of a Shanghai maternal and child health hospital asked Zhao to make a dough model to publicize painless childbirth. He suggested a type of preservative that would prolong the life of the work. Thanks to that tip, Zhao further refined the technique, making the dough less likely to mold, crack or decay.

“Zhao’s works are like the xieyi style of classic Chinese ink painting, which emphasizes simplicity and expressiveness,” says Tang. 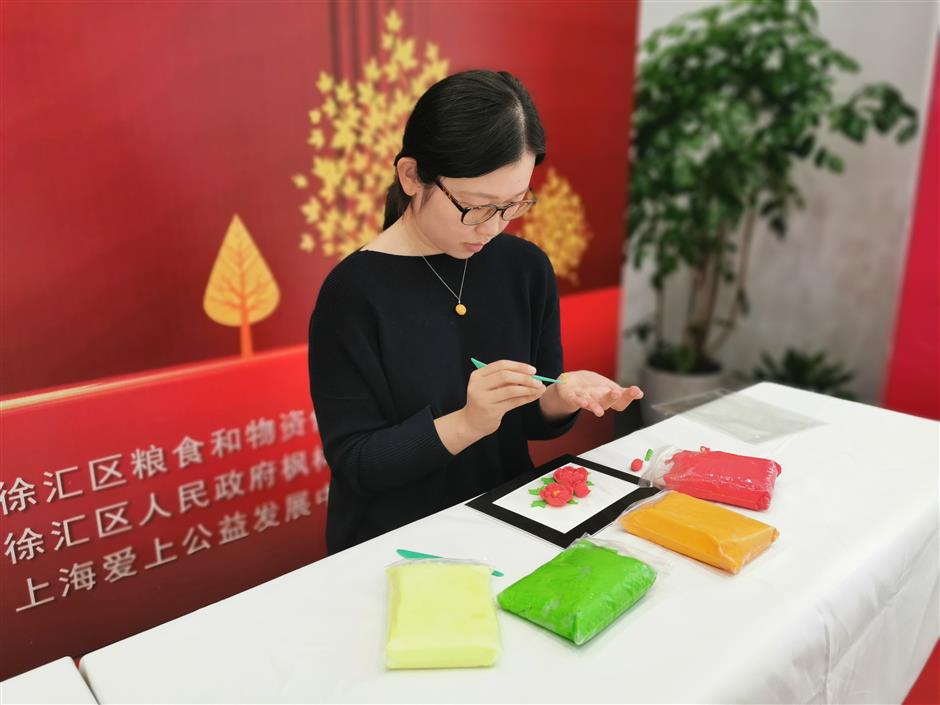 She learned the skill from Chen Yu, a Zhao apprentice, and is now considered the third generation of Shanghai-style dough sculptors.

“Compared with the northern dough sculptures, the Shanghai-style one focuses more on detail,” says Tang.

She calls Zhao the “godfather of Shanghai-style dough art” and cites his three breakthroughs in the craft.

First, Zhao’s dough works eliminated the bamboo sticks usually used to prop up dough figures and made them stand on the table by themselves. Second, he introduced innovation into the artworks, creating new themes and adding more colors. And third, his improvements in the raw materials allowed artworks to be stored for a long time.

The Shanghai Arts and Crafts Museum houses a dough sculpture area that displays three Zhao artworks made in the 1960s. They are well preserved. Each sits in a glass case to control humidity and temperature.

One of Zhao’s work depicts Lin Chong, a fictional character in the 14th-century novel “Water Margin.” Wearing a cloak, the lifelike figure carries a spear across his shoulder and has a sword with red ribbons strapped to his waist. The pearl-like pattern on his headwear is also made of dough. 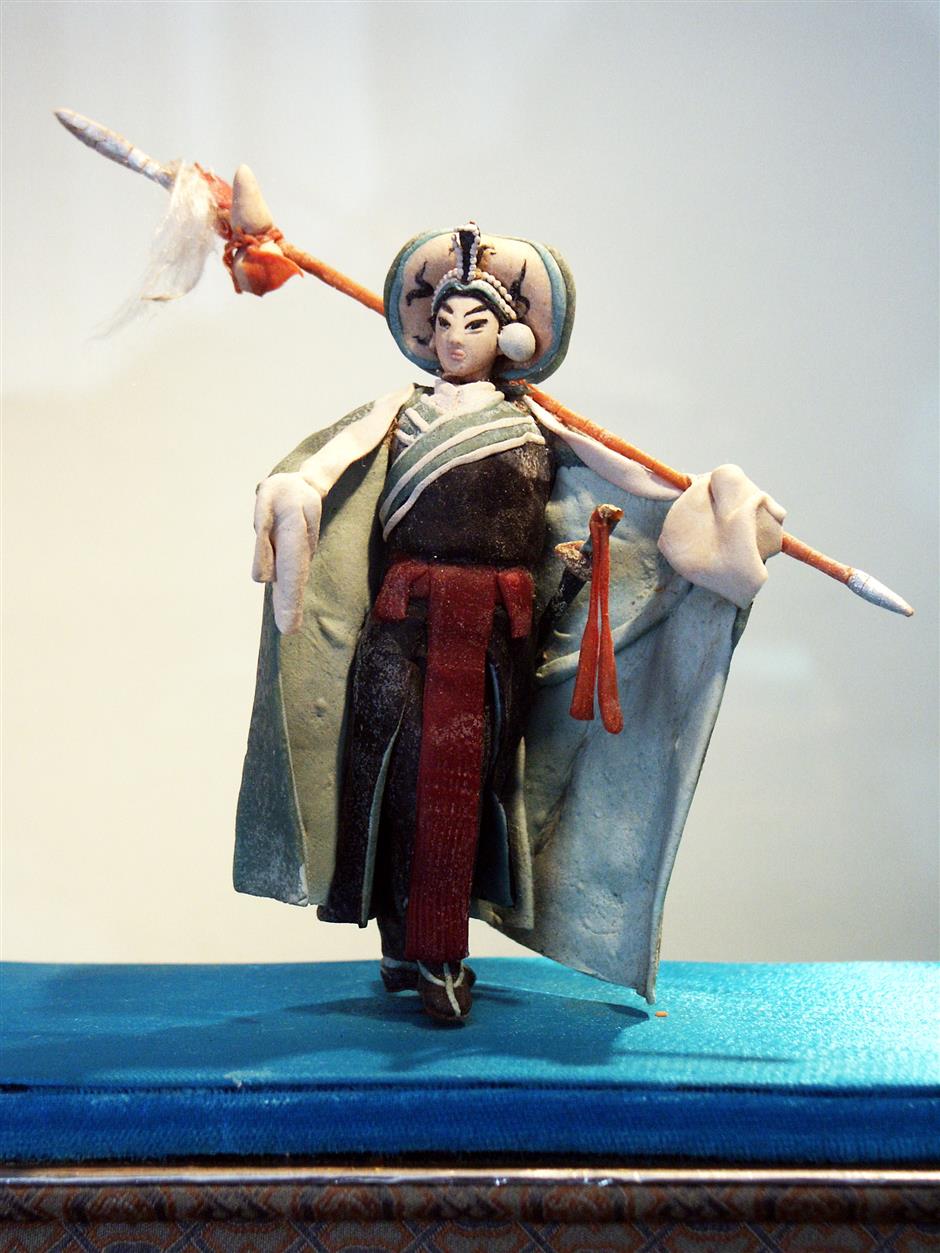 A dough figurine made by Zhao Kuoming in the 1960s features the fictional character Lin Chong.

Tang shows me the steps used in making of the pearl pattern. She rolls the dough into a long strip and uses a small comb to pattern it.

“The dough works have endured for over 50 years, though there are some small cracks and the colors have faded a bit,” she says. “These changes are part of the artwork. The process is more important than the final product.”

Apart from the comb, the tools used to make dough sculptures include two self-polished organic glass bars of different thicknesses, a pair of small scissors and a knife.

“Making dough sculpture is like addition, adding one layer after another,” says Tang. “The head is often cast first, followed by body, legs and arms.”

Kneading, rolling, twisting and pressing, Tang turns a few colored pieces of dough into a lively figurine in a matter of minutes.

Tang has been practicing dough sculpture since she graduated from the department of Chinese painting at Shanghai University in 2010.

One of her signature features imitates the handscroll entitled “Daolian Tu,” or “Court Ladies Preparing Newly Woven Silk,” by Zhang Xuan (AD 713-755), a court painter in the Tang Dynasty.

Tang spent one year making the large work. It portrays 11 luxuriously adorned court ladies who are pounding silk with long wooden poles, preparing thread, sewing and ironing silk cloth, while a charcoal stove is fanned to keep the heat going.

Their dresses and coiffures are richly detailed. All the props, such as wooden poles, a carpet, a stove, and a round silk fan, are made by Tang herself.

“Dough sculpture is an art for all ages,” says Tang. “I am very lucky to do what I love for a living.”