When an architect, an artist and a composer collaborate on a single large-scale work for an exhibition, there must be something different.

And that is not even to mention Liu Yichun, Qiu Anxiong and Jin Wang are all big names in their fields.

Organized by Art Pioneer Studio and L+MALL at the Lujiazui Center, the work “How It Flows On” combines architect Liu’s rearrangement of space, artist Qiu’s silhouette animation and composer Jin’s polyphonic music, connecting APSMUSEUM and Riverside Passage through the immersive and interactive installation for the public. 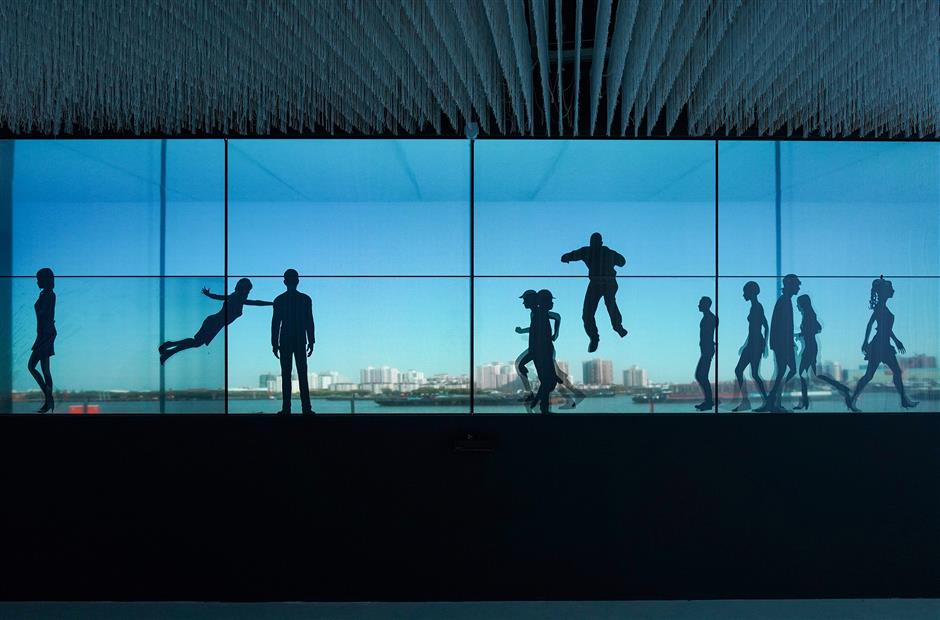 “How It Flows On” is a new multi-sensory installation on display at the APSMUSEUM.

Curated by Li Xiangning, dean of Tongji University’s College of Architecture and Urban Planning, the exhibition tries to achieve a trans-space, trans-time and trans-disciplinary large-scale work.

Although APSMUSEUM is in a busy shopping mall, and Riverside Passage is along the Yangpu riverside, an on-site transmission would reflect simultaneously the exact river scene viewed from Riverside Passage on an LED screen at the APSMUSEUM.

The installation also includes images of drifting humans and objects.

“In 2020, after lockdown in the physical space, the role of virtual space in our urban daily life has become ubiquitous,” said Robin Wong, founder and director of APSMUSEUM.

“In this sensory encounter woven by multiple spaces, visitors might experience the flow of time at APSMUSEUM, Riverside Passage and other places contemplating the fickleness of everything in the space that brings together the new and old, and the virtual and real.”

She says the APSMUSEUM will connect with different cities in China and abroad for “How It Flows On,” and the famous “A Lonely Library” in Anaya Art Center in Qinhuangdao, north China’s Hebei Province, is also scheduled on this year’s list. Visitors at the APSMUSEUM then could see a live screening of “A Lonely Library.”

It is a bit surprising that Liu, one of the hottest architects in China today who rose to fame through the Long Museum on the West Bund, would squeeze in time for his full schedule for this installation.

“This is not the first time that I collaborated with contemporary artists, and I have worked with Zhan Wang and Ding Yi before,” said Liu with a smile, “Industrial ruins and contemporary art are the main things to draw me here.”

Artist Qiu is noted for bringing surreal experiences through his animations, leading the viewers to wander in his “contemporary mythical” world. Those figures and objects in the animation flow freely to the void and then disperse and disappear as time goes by.

Composer Jin has also some connection to the contemporary art circle. Previously, he used his music to link people and objects that may seem unrelated. 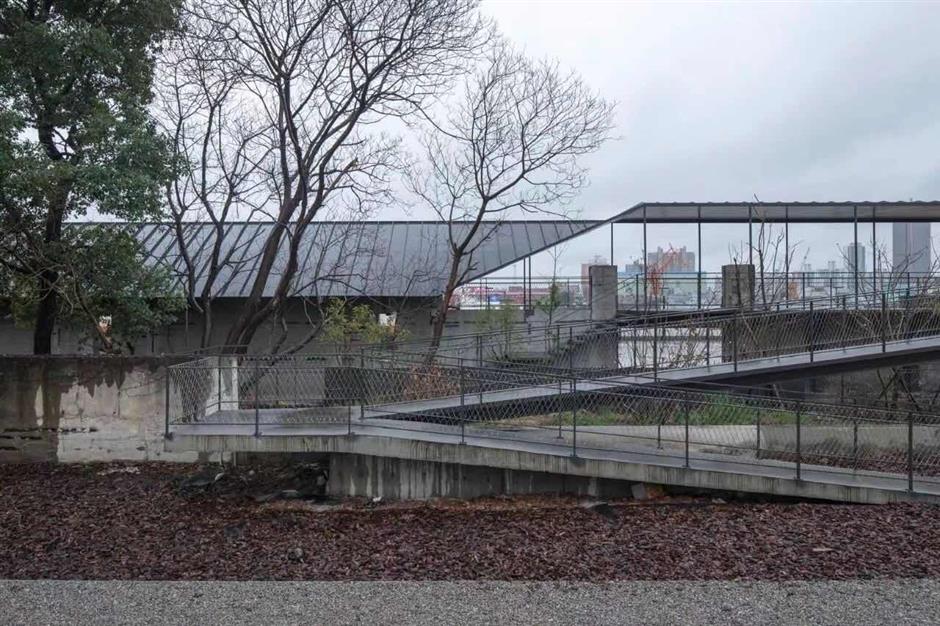 Between the wharf and the riverbank, there is a garden with a sense of desertion as well as a grounded corridor with eaves.

Talented architect sees a place for the flaneurs of the world

Born in 1969 in Haiyang in Shandong Province, Liu Yichun is widely recognized as one of China’s top architects.

A postgraduate from Tongji University, good-looking Liu was a “campus prince” in the eyes of his peers. He not only excelled in his academic study, but also embarked on a smooth career path straight after graduation. When most of his classmates were buried in drawing basic designs, he soon became the chief architect at Tongji Architectural Design.

As the founding partner and principal architect of Atelier Deshaus, he designed and transformed distinctive works that carry rich and profound histories, including Long Museum West Bund, the Taizhou Contemporary Art Museum, Modern Art Museum (Shanghai), and the 80,000-ton silos on Minsheng Wharf.

Liu has participated in a variety of major international architectural and art exhibitions in more than 15 countries and regions.

He has also lectured at many universities and institutions such as the Harvard Graduate School of Design, the University of Hong Kong and the Architectural Institute of France.

His representative design project, the Long Museum West Bund, was awarded the AR Award for Emerging Architecture by Architectural Review and the Honor Award for Architecture Best in Show 2019 by AIA China.

He is collaborating with artist Qiu Anxiong and composer Jin Wang, both leaders in their field, on a newly opened exhibition, “How It Flows On,” at the APSMUSEUM in cooperation with Riverside Passage which runs through July 15. 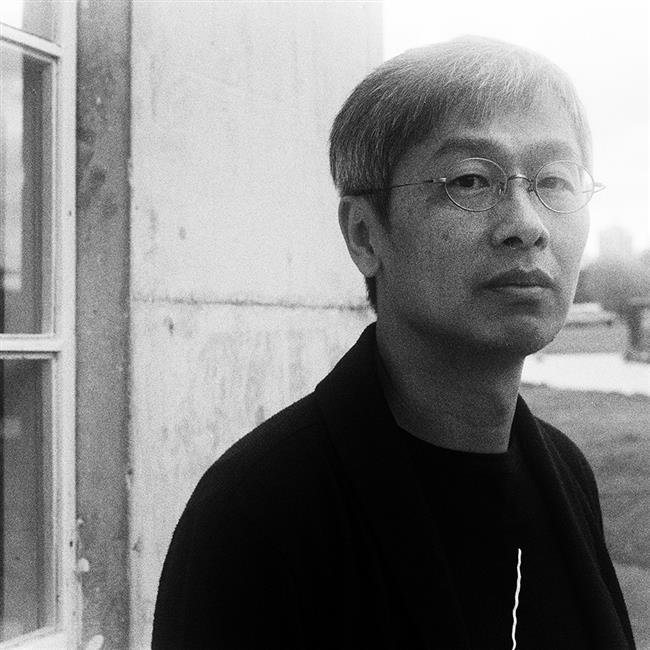 Q: Did you ever dream as a child of being an architect?

A: No. Actually I knew nothing about architecture at that time. I was good at both Chinese and math at middle school. But my father, a Chinese teacher, suggested I study science, because he thought it would be easier to find a job in the science area.

Architecture is something between liberal arts and science. Unfortunately I didn’t learn any basic painting technique before, so it was quite tough in my freshman year.

Q: What were the three basic requirements of a good architect you thought when you were young? Now several decades later, any change?

Q: Tell us about your renovation of “Riverside Passage,” a public artwork along the Yangpu riverside?

A: The Riverside Passage is previously a site used as a coal-handling wharf. There is a 90-meter-long and 4-meter-high slope to prevent coal from falling into the gap between the high dock and the flooding wall. Along the passage, dust and earth accumulated and plant seeds from nowhere began to sprout and grew into large trees.

The Riverside Passage uses the long and solid concrete structure as the foundation for future construction. It would be a base and podium that has foundational meaning for a ramp across the gap between the flooding wall and the wharf.

The one-sided sloped roof effectively defines the space on the inside and the outside of passage. Between the wharf and the riverbank, there is a garden with a sense of desertion as well as a grounded corridor with eaves.

The coal-handling wharf whose function has long gone is now polished and used as a roller-skating playground. The ground, the flooding wall, and the intervening structure form a new entity, where people can stay or walk past. A place for an everyday flaneur (wanderer).

Q: “Vault-Umbrellas” is an original structure that you designed for Long Museum West Bund. How did you come up with the idea?

A: The prototype of a modern art museum originates from the imperial palace where paintings were displayed from one room to another.

However, I was thinking of another mode of displaying instead of these separate rooms, to let the walls function. When the design started, there was a preserved coal hopper unloading bridge and a two-story underground parking garage, which was built two years ago as part of a building whose above-ground part was yet realized.

Various combinations between “vault-umbrellas” of different directions create multiple meanings for the above-ground space. The mechanical system is integrated into the hollow space inside the “vault-umbrellas” structure. Together they cover a square site and from the interior space.

The interior walls and ceilings are both of as-cast concrete finish. Their ambiguous geometric demarcation creates a unique spatial experience offering both a sense of protection and a sense of freedom.

Q: Why are you so attracted to the “ruins?”

A: In the past few years, my projects have been increasingly concerned with the ruins. For me, a ruin gives a sense of freedom and is where the energy of nature hides. It is also a root metaphor that transcends cultures. When a building returns to nature, a neutral structure emerges. This makes me realize that such a structure-scape is always latent inside architecture and this is why we could find a way to continue our work with ruins.

In my recent works, one approach is to enliven an existing ruin without destroying its natural qualities, and another approach is to purposely create a sense of ruin in new buildings.

Q: Is Long Museum West Bund a milestone in your career? How long did you work on this project?

A: I spent nearly two and a half years on the Long Museum West Bund. Sure, it received high accolades in the architectural community and the public. But I refuse to take it as the pinnacle of my career, and now I endeavor to create my next milestone.

Q: When did you first approach China’s contemporary art?

A: Fairly early. My partners and I built a triplex house in Kunshan, Jiangsu Province, in 2002. The style and structure of the house were quite unique at that time. Artists Xu Zhen and Yang Zhenzhong asked us to randomly record inside the house with a video camera, and later they created a short video based on our recording. The video was screened during the 2002 Shanghai Biennale under the theme of “Urban Creation.”

In the following years, I collaborated with sculptor Zhan Wang and painter Ding Yi, all pleasant experiences for me.

A: I prefer to get whenever I can into the mountains.

After breakfast, I go to sleep again. Then lunch and a walk in the mountain, again take a nap in the afternoon. After dinner, look at the stars in the sky.

You can see how exhausted I am now! Frankly speaking, not only the heavy workload but the continuous communication and compromises with clients are far beyond one’s expectations.

Q: Who is your favorite architect?

A: There is a group of architects whom I have admired during different periods.

But now in my eyes, they no longer seem to be insurmountable. However Louis Kahn (1901-1974), a figure between modernism and contemporary architecture, whom I didn’t think highly of before, had a strong impact on me when I saw one of his buildings in 1999 in Los Angeles, the United States. The building has a very plain and ordinary outlook, yet is so touching when you step inside. 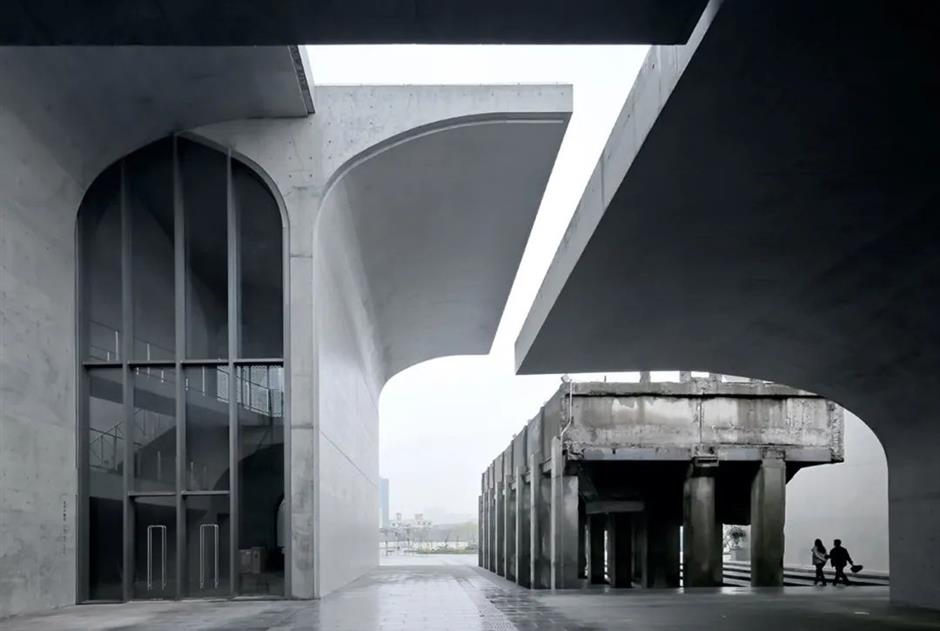 The Long Museum West Bund is characterized by a unique “umbrella-vaulted” structure.