The everlasting, exquisite nature of woman

For artist He Duoling, woman is his everlasting subject.

“I think women are the most exquisite creation of nature, essentially unparalleled.”

“Grass and Color,” the solo exhibition of He Duoling, is under way at Long Museum West Bund through June 20.

The exhibition features more than 70 works from the artist’s oeuvre, ranging from the 1980s to the present, plus various related documents, in an attempt to reveal his philosophy and constant evolution.

In fact, images of grass have long been reflected through his creations over the past several decades, and serve as a clue for the viewer to understand the rich and abundant colors in his paintings.

Born in 1948 in Chengdu, southwest China’s Sichuan Province, He is one of the most renowned oil painters in contemporary Chinese art.

His early influences were Western painters, such as Andrew Wyeth (1917-2009).

After an education in traditional Chinese painting, he was able to build upon a unique artistic language by combining oil painting with his newfound knowledge, blending Chinese and Western concepts and techniques.

The result is an artistic language that is elegant but lyrical; simple but mysterious.

With the help of his unique lyrical abilities and grasp of the artistic language, He was able to unfold a new dimension of Chinese painting in the 1980s.

Despite the new ideas that were on the rise with the development of contemporary art, he remained an observer of such trends. Meanwhile, he chose to concentrate on perfecting his personal expression of an individual life experience, continuously integrating elements of music, poetry, architecture and other fields of study into his own works.

His canvas “Spring Winds Have Awoken,” which was created in 1981, won him high accolades and recognition in the art community.

In the painting, although the animals surround the girl, she does not entirely occupy their sight.

The cow’s gaze comes from her rear side, over her shoulder, and glances forward.

The dog’s gaze, along with the pointing of its nose, stretches over her head and extends to the sky, while the girl’s gaze is almost out of focus. She seems to withdraw from her sight and falls into a trance dreamland.

The three gazes do not meet within or outside of the painting, but travel in different directions.

The subject is invisible time, which is distinctly perceived because of its concrete form — the spring breeze has traveled all over the painting, covering the grassy slope.

“For him, women are not only the masterpieces of nature, but also the incarnation and guardian angel of time — she brings comfort to the lonely male figure through her romantic desire and reflects the artist’s attachment and fear of time itself through the transformation of self,” commented Zhu Zhu, the curator of this exhibition.

However, those women in his paintings are sad, perhaps a kind of sadness from his inner despair. And sadness might suggest certain dissatisfaction of life, the ephemeral beauty and the presence of oblivion.

Different from his peers, exploring certain support from literature to expand his visual poetic expression has always been He’s approach.

However, poetry or literature is not the only inspirations. He has an extensive range of interests, just as “Spring Winds Have Awoken,” where he was inspired by Franz Schubert’s song.

One of the highlights at the exhibition goes to his large-scaled “Russia Forest” series. 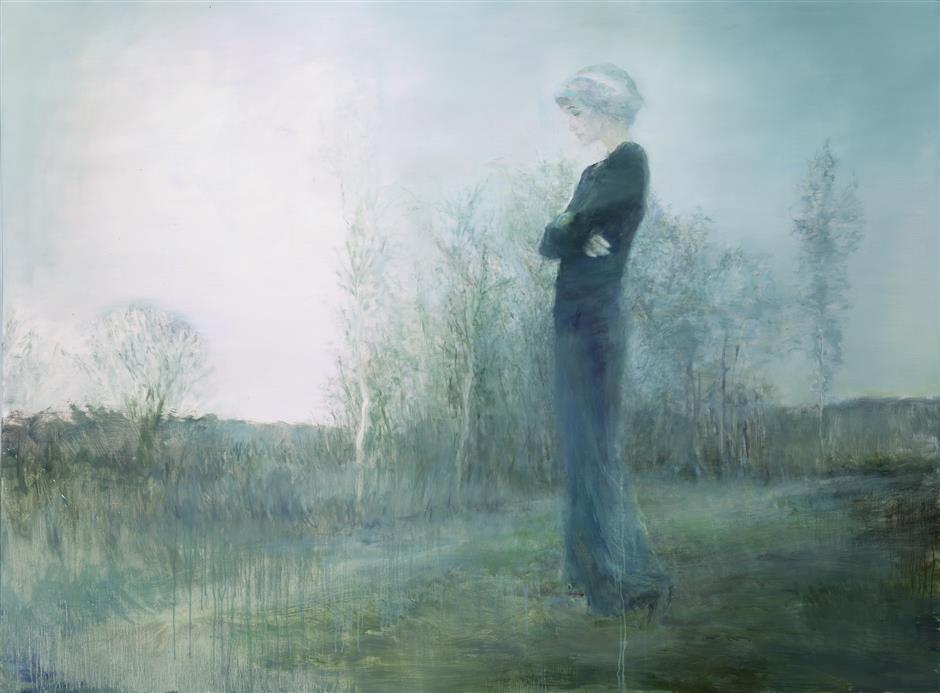 “When you go to the forests of Russia, you feel that your eyes have become a wide-angle lens,” he says.

Talking about his trip to Russia in the fall of 2014, He gets excited: “The enormous forest stretches to the horizon, like walls one after another, right in front of our eyes. Russia is not a mountain, not a desert ... it’s a forest.”

In his view, that nation and its culture are the products of the great forest. Out of this recognition, he arranges figures of the poets and writers of the “Golden Age” (1860s-70s) and “Silver Age” (1890-1921) of Russia in the background in creating the “Russian Forest” series.

For example, Alexander Pushkin leans against a tree and raises his proud chin, and Anna Akhmatova, whose slender and melancholic figure resembles a female leopard, seems to be pacing by the small woods of the imperial village she had chanted.

In the so-called “Bronze Age” in 20th century Russia, he depicted Dmitri Shostakovich waiting to be arrested at a narrow lift entrance.

Shostakovich seems to have just finished the last note, his right arm hung, and he appears serene in the face of the threat and dread.

The gloomy forest behind seemingly reflects a harsh situation, yet there is still a sense of relief.

Now living and working at his studio in Chengdu, “Russian Forest” is a necessary vision.

“These spaces around me are afloat and way too comfortable,” He once stated.

“Thus the Russian Forest is to recover a kind of heaviness, or to be exact, the metaphysical comfort,” said Zhu.

“Whether the Lolita girl, or the women he had painted for many years can’t help him resist the eventual void and despair brought about under the erosion of time.”