Tale of a man with a real heart

Bigan Temple in Xinxiang City, Henan Province, is China’s first structure that combines a tomb and a temple to bury, remember and worship Bigan, a prince, martyr and righteous official more than 3,000 years ago.

The spirit screen in front of the entrance gate, paved with 24 jade green glazed tiles to form the patterns of cabbages, suggests a popular story, which has been carried forward by word of mouth for centuries.

Uncle of the last king of the Shang Dynasty (1600-1046 BC), Bigan stood out to rebuke his nephew Emperor Xin, who ruined the kingdom with his corruption and indulgence in sensual pleasures.

Annoyed by the uncle’s advice, the emperor ordered Bigan’s execution — by digging his heart while he was still alive. 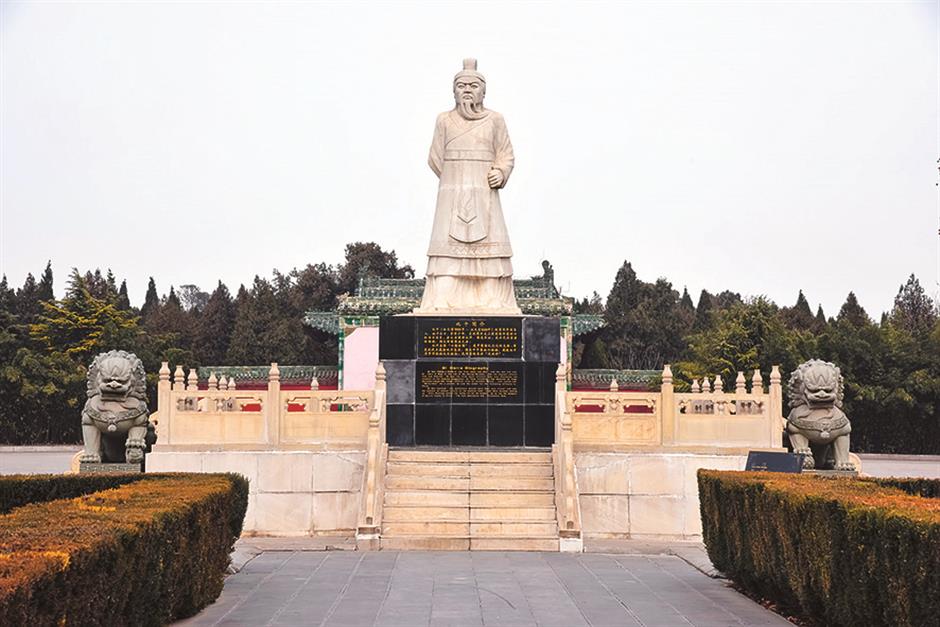 The statue of Bigan stands on the plaza of Bigan Temple.

Hearing the news, the Jade Emperor (the Supreme Deity of Taoism) appointed Jiang Ziya (not known-1015 BC), the founding father of the Zhou Dynasty (1046-256 BC), to save the dying man.

Jiang found Bigan and told him to ride south to Xinxiang (place of hearts), where a new heart could grow — but on the condition he kept silent all the way.

When he reached Muye, the northern tip of Xinxiang, Bigan unexpectedly met an old woman who was selling cabbage, a vegetable “without a heart.”

Forgetting what Jiang had told him, Bigan asked, “How can a cabbage live without a heart?” The woman replied, “The vegetable can live, but a man without a heart has to die.”

Just then, blood gushed from Bigan’s mouth and he fell from the horse, dead.

It has been a well-known story in China over the centuries, steeped in myth. In reality, Bigan was killed and his heart was scooped out alive. The man’s blood stained the ground red.

Today, locals grow patches of cabbages on Bigan’s tomb and around the temple to pay their respects to the man’s bravery and integrity. 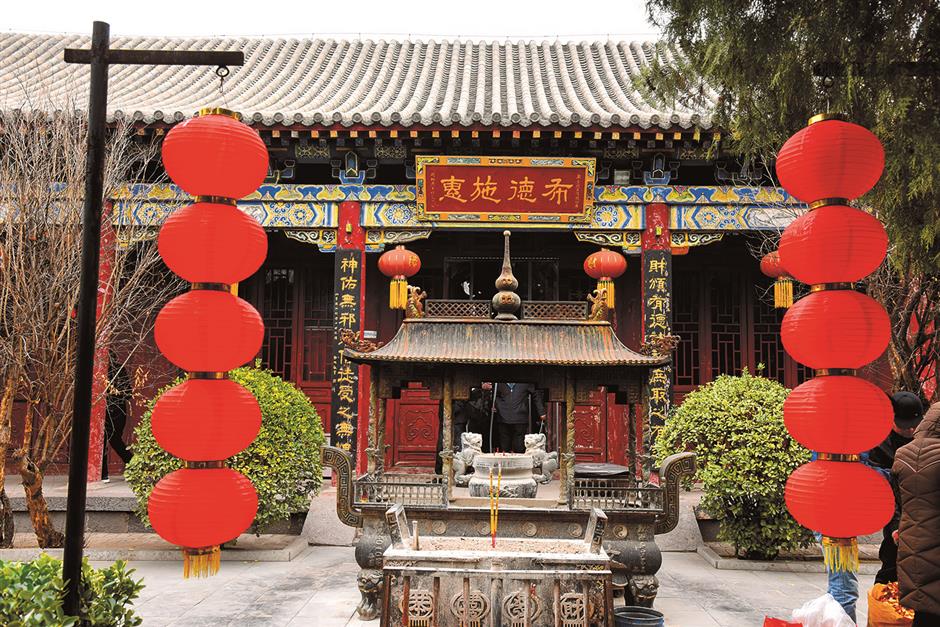 Bigan Temple in Xinxiang City, Henan Province, is China’s first structure that combines a tomb and a temple to bury, remember and worship Bigan, a prince, martyr and righteous official more than 3,000 years ago. —

The temple was built on the site of the tomb in Ming Dynasty (1368-1644) and stores a variety of precious cultural relics, such as stone carvings and calligraphy works by emperors in different dynasties.

The tombstone of Bigan was set up in the center of the compound, sheltered by the Danxin (loyal heart) Pavilion constructed in the Ming Dynasty. The highlight is the stone carvings, engraved by Confucius (551-479 BC) using his sword. The stone is the only known example of the sage’s calligraphy.

It is said that Confucius passed Bigan’s tomb when he traveled through different states to spread his word. To pay his respects, he drew his sword to carve the characters.

Bigan’s grave silently lies in the green pines and cypresses, bathed in the sunlight and moonlight for 3,000 years.

Covering about 1.3 hectares, the burial ground is actually a small hill, about 20 meters high, planted with greenery.

The ancient cypresses, without any trimming, have grown into a flat top with cracked branches.

Their flat tops look as if the trees are taking off their hats to pay homage to Bigan, and those branches splitting into smaller branches look like the abundant blood vessels of a heart.

The Bigan Temple is regarded as the spiritual home for all Chinese people around the world surnamed Lin, because it keeps a stone tablet, carved in 1538, which clearly recorded how the family name Lin got started.

The inscription, about 1,000 characters, still legible, is the only stone carving relic in China that traces the origin of the surname Lin.

After Bigan was killed, Emperor Xin wanted to exterminate everyone of his family. Bigan’s wife, surnamed Chen and pregnant at that time, was secretly released by kind soldiers. Their son was born in a nearby forest. When the killers arrived and interrogated Chen about her infant, the woman, as a last thought, pointed to the forest (“lin” in Chinese) behind. The killers let them go and continued to hunt in the woods.

The Shang Dynasty was finally overturned by Ji Fa, who started the Zhou Dynasty. He set up the tomb for Bigan and granted the family name Lin to Bigan’s descendants.