For most foreigners, lanterns are a quintessential image of China. For locals, they are symbols of cherished annual festivals and national pride.

Many Shanghai residents have fond childhood memories of running in the city’s back lanes with rabbit lanterns and watching the lantern show at Yuyuan Garden to celebrate the annual Lantern Festival, which is celebrated on the 15th day of the new lunar year.

“The rabbit is an auspicious animal in Chinese culture,” said He Weifu, 72, a craftsman of lantern making. “It represents yutu, or ‘jade rabbit,’ which is said to live on the moon with the lunar goddess Chang’e. The Lantern Festival marks the first moon of the new lunar year, and the rabbit lantern is a symbol of reunion and harmony.”

An exquisite phoenix lantern made by He Weifu

Lanterns have long been part of Chinese culture. They lit up dark winter nights as far back as 2,000 years ago and gradually became fixtures of important rituals, holidays and folk customs.

Lantern-making runs in the He family. He Weifu is the grandson of He Keming (1894-1989), known as the “king of lanterns” in the area immediately south of the Yangtze River.

“We used to hang fish lanterns, lotus lanterns and bird lanterns made by my grandfather in the living room a week before Chinese New Year’s Eve, and didn’t take them down until the Lantern Festival,” he recalled. “My family continues the tradition today, even when I visit my son’s home in Los Angeles.”

As if to prove the point, he showed me a picture of a reunion dinner at his son’s US home. It showed swan lanterns, fish lanterns and lotus lanterns hanging over a table filled with dishes of food.

In order to make his animal lanterns more lifelike, the grandfather kept a small zoo on the rooftop of his four-story house on Dongtai Road, with birds, a rabbit, a dog, a cat, a squirrel, a chicken and goldfish. They became He Weifu’s playmates in childhood. 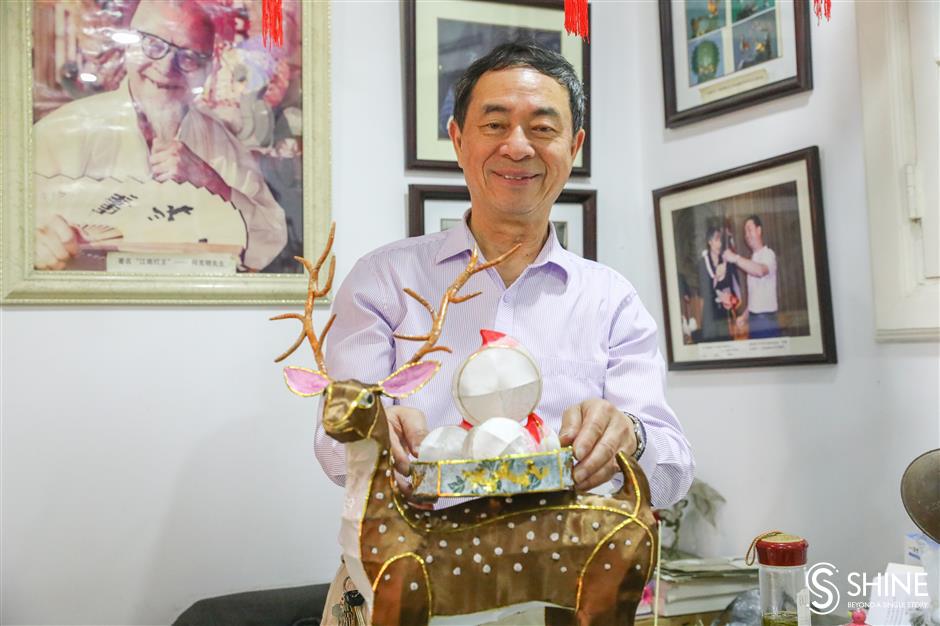 Lantern maker He Weifu is the grandson of a renowned craftsman of the art.

“My grandfather had strong powers of observation,” said He. “He told me that he once spent long hours observing the warships and the merchant ships sailing on the Huangpu River, and then he used cardboard to make models that featured details like their flags, windows, doors and cannon.”

When He Keming was 13 years old, he went to see a Lantern Festival show in Huangpu District. He was immediately intrigued by a huge dragon lantern, manipulated by a team of dancers by using poles positioned along the length of the dragon.

In order to get a better look at the dragon, he followed the dancers for more than 5 kilometers. Returning home, he replicated the dragon lantern, and thus began his career in lantern making.

At that time, the elder He was working as an apprentice in a fabric store during the day. Nights, he worked on making lanterns in his attic. They were very good, and soon he was accumulating customers.

“My grandfather made components in summer and autumn, and stored them in a pile of cigarette cartons,” said He Weifu. “He assembled them in November and December, preparing for the upcoming Lunar New Year holiday season. In January, he would rent a small retail space in Yuyuan Garden, where he sold the lanterns to passers-by.”

One photo on the wall of He Weifu’s studio at the Shanghai Arts and Crafts Museum shows his grandfather shaking hands with a Peruvian vice president in 1983. Many of his elder’s works were sent as national gifts to foreign dignitaries. 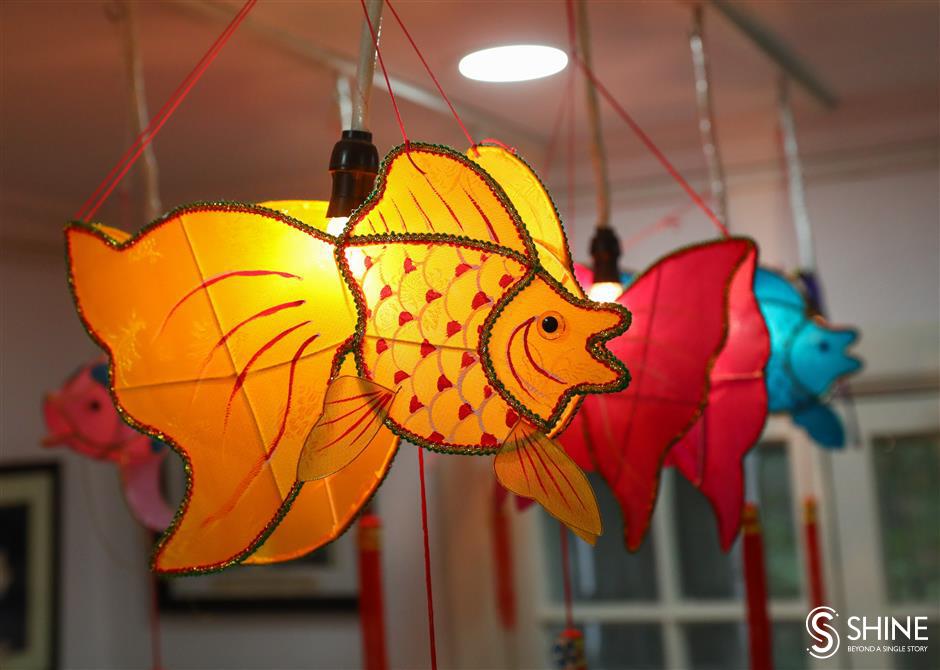 Goldfish swim below the ceiling of He’s studio.

At He Weifu’s studio, lanterns fill the room — a school of fish swim on the ceiling, a rooster crows in the corner, a phoenix flies among flowers, a flock of red-crowned cranes rests in a glass cabinet and a family of rabbits graces the center of the room.

On He Weifu’s desk, there are several yellowed, even tattered books, which include an encyclopedia of animals. On the page of a book illustrating a frog, He has sketched its structure before using iron wires to make the skeleton for a frog lantern.

“I have used the books for several decades,” said He. “They help me to know the anatomy of animals, which allows me to create lifelike animal lanterns. I have also learned traditional Chinese bird-and-flower painting.” 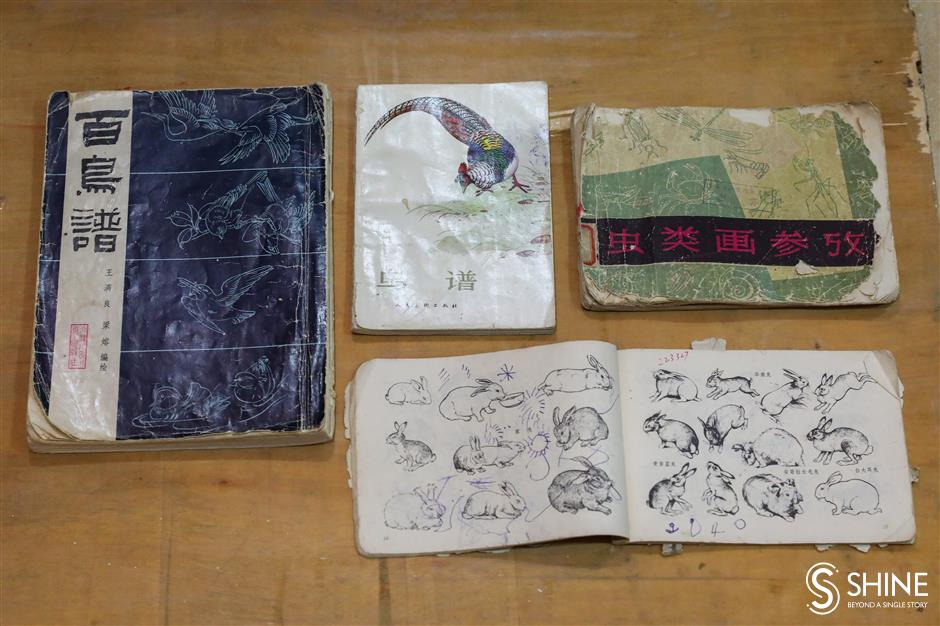 According to He, making the skeleton of an animal is the most difficult step in a delicate process that involves straightening iron wires, wrapping paper to cover wires, applying paste on silk cloth to make it stiffer, pasting silk cloth on the skeleton and drawing patterns.

“I was brought up by my grandparents, and my grandfather made many lanterns for me as childhood toys,” said He. “I admired my grandfather very much, and I wanted to inherit his skills when I was young. However, the ‘cultural revolution’ (1966-76) aborted that dream.”

He didn’t begin to really learn the folk art until 1976, when he was working at the Shanghai automation instrument factory. He took 10 months off from work to study the art, and devoted all day, every day to making lanterns.

He was particularly skilled in making rooster and crane lanterns.

One of his lanterns, which features eight cranes and a pine tree, is displayed on the first floor of the Shanghai Arts and Crafts Museum. He spent four and a half months making it in 2008 to celebrate the Beijing Olympic Games.

On the lantern, several cranes are drinking water from a pond, and one is standing on a rock, flapping its wings and about to fly. Next to it, a crane is twisting its neck to groom. On the left side of the artwork, a crane is staring at another one flying over a pine tree.

“In Chinese culture, the rooster embodies the virtues of politeness, bravery, courage, benevolence and reliability,” said He. “The crane is an auspicious animal that symbolizes longevity.”