Tale of man who became a god 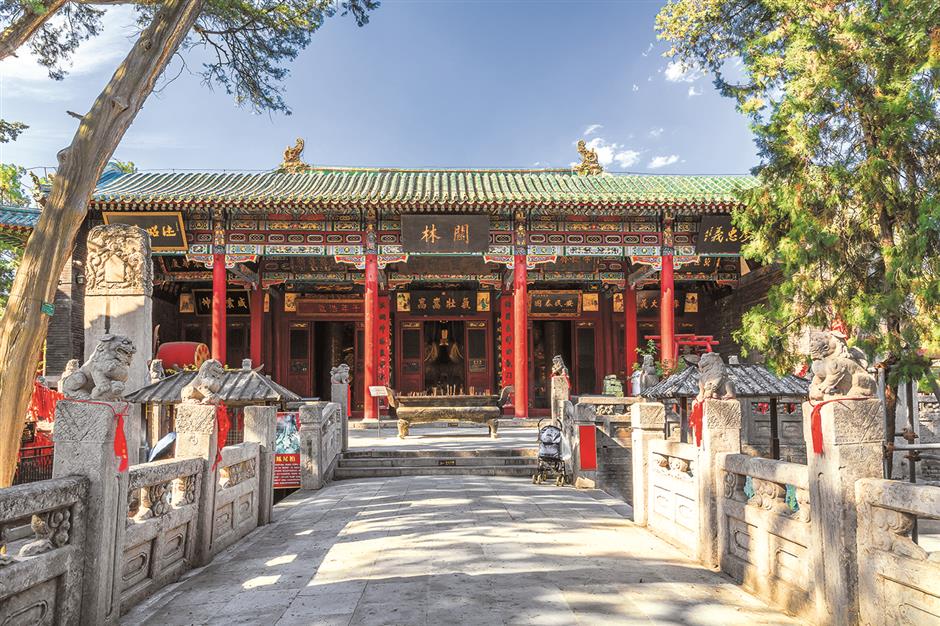 There are thousands of temples to Guan Yu in China and overseas, but the Guanlin Temple in Luoyang, Henan Province, is the biggest, combining the tomb, temple and a park.

Respected as a sage, general and god, Guan Yu (AD 160-219) is deified and legendized in Chinese history, worshipped for hundreds of years for progressing from the human to the divine.

The human Guan is revered as a loyal official, generous friend, brave fighter and kind man, while the divine Guan is worshiped by people seeking good fortune, dispelling bad luck and promising prosperity.

So his statue — in a long green robe with a broadsword — is commonly seen in shop fronts, known as the “guardian angel” for businessmen in Chinese-speaking world.

Guanlin Temple in Luoyang City in Henan Province is the place where Guan’s head was buried after it was chopped off in his last battle in Hubei Province.

There are thousands of temples to him in China and overseas, but this is the biggest, combining the tomb, temple and a park.

The compound’s main section was finished in 1592, in the standard architectural style for the time for an emperor. Sitting on a straight north-south line, there are the front square, entrance towers, royal path, Bell Tower, Drum Tower, different halls, pavilions and the tomb, decorated with centuries-old pine trees on both sides.

The spacious square features a 300-year-old opera stage in the south, where locals danced to remember Guan in annual worship.

People might ask why there is an entertainment venue at such a solemn and sacred memorial park.

The locals think Guan still loves watching opera in heaven. And the tradition is carried forward still today — every autumn a grand temple fair and worship ceremony has been the city’s biggest event.

A pair of stone lions, Luoyang’s biggest of their kind from the Ming Dynasty (1368-1644), have guarded the front gate at two sides for centuries.

The red-painted door is inlaid with 81 large bronze nails in nine lines and nine columns. It was the symbol of the highest level in feudal society, only for an emperor to use. 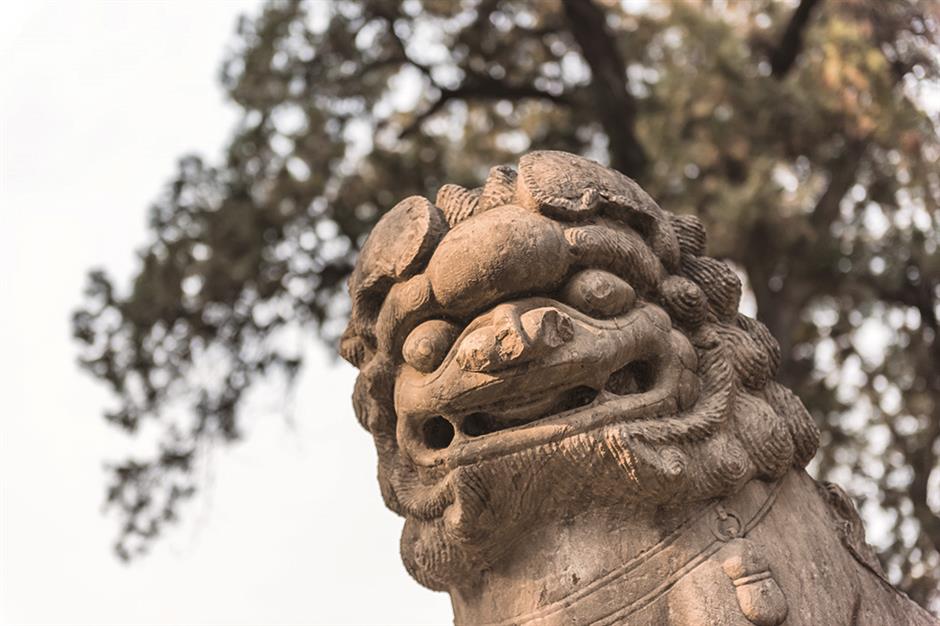 A stone lion at Guanlin Temple in Luoyang City

Past the front gate, the Bell Tower and Drum Tower stand on opposite sides along the royal path. They are indispensable for a typical Chinese temple.

The bell rings at dawn to start a whole new day and the drum beats at dusk to end the work day.

The Yimen Gate (Gate of Etiquette) built in the Ming Dynasty was used as a place for visitors to tidy their appearance — military officers were required to get down from their horse and civil officers needed to get off their sedan.

The six characters on the horizontal inscribed board was written by the Empress Dowager Cixi (1835-1908), which simply read: “Guan Yu’s fame is widely spread to every corner of the world.”

The royal path flanked by stone-lion handrails was paved solely for the emperor, who came to worship Guan.

The 104 lions are vividly carved, some sitting square, some playing with cubs and some scratching their belly. If you look closely, you can see the handrails were also engraved with sponsors’ names and coin patterns — a wish for making a big fortune.

The royal path leads to the Hall of Peace, the compound’s main structure. It’s the sacred shrine to commemorate Guan, who sits in the center dressed up in gold from head to toe.

The Hall of the Goddess a few steps away is to worship Guan’s wife Hu, his daughter Guan Yinping and son Guan Xing.

There are no exact historical records of his wife. People only know she was surnamed Hu and was good at treating various diseases.

So locals come to the hall to pray for health and longevity.

Past the halls and pavilions, deep in the back, is the burial site of Guan’s head. The burial ground covers 2,600 square meters, and the highest peak is 17 meters. A stone door was set up in 1717, with two small holes.

After worship, people can throw coins into the holes: The left is for peace and the right for money.

If they jingle, it suggests Guan has agreed to fulfill the wishes.