Chinese flower-and-bird ink-wash painting reached its peak in the Song Dynasty (960-1279), and was greatly favored by artists and literati alike.

The genre also includes fish, squirrels, crickets, butterflies, turtles, frogs and other small animals, as well as all manner of flowers, plants and trees.

Yet today the subject of the delicate natural world and its small denizens seem less appealing to most people.

But that’s not for Wan Fu.

The female artist has been engaged in her world filled with flowers and birds for several decades, and finally her turn has come.

As an echo to the ongoing China Flower Expo on Chongming Island, Wan’s solo exhibition featuring 100 of her flower-and-bird paintings will be on display from May 25 to June 1 at the Liu Haisu Art Museum.

This is actually her first official exhibition to the public.

“I was invited by the preparatory office of the 10th China Flower Expo,” said Wan with a smile. “Originally the exhibition was planned to be held inside the flower exposition, yet the exhibition space there is not so perfect.”

Among the 100 paintings, Wan paints a different flower and bird for each. 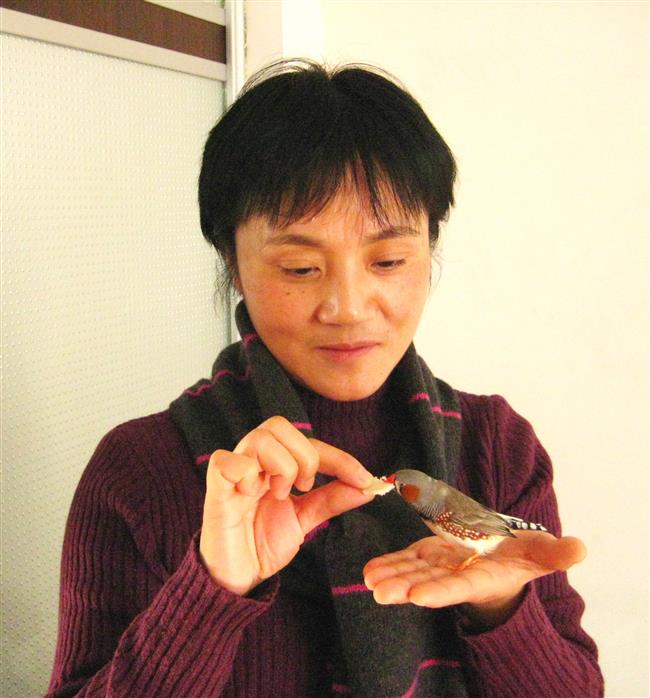 Born in 1959 in southwest China’s Sichuan Province, little Wan often felt lonely after her parents left her to work in Tibet.

“So I would play alone in the field and gaze at grass and flowers there,” she recalled. “That might partly explain why I was interested in painting later... perhaps an offset to my solitude.”

Because of her introverted character, she chose to adopt Chinese realistic style in the depiction of flowers and birds under her brushstrokes.

On closer inspection, the feathers of the birds are so vividly and intricately rendered that viewers can almost feel them.

“To paint a bird, I should first be a bird lover,” she says. “I often talk to my birds and treat them like my best friends. They are actually creatures of spirituality.”

Unlike many other artists who network and socialize at various gatherings, Wan has secluded herself in her studio for several decades. She has a very simple life: painting, raising birds and growing flowers at her home with a small backyard. This may account in part for the soothing power of her paintings.

“I once raised a pair of birds for 10 years, starting from eggs to their death,” she said. “Sometimes they were so naughty that they would bite my brush when I was painting.”

Asked how she was able to paint 100 kinds of birds and flowers, she chuckled.

“Rome was not built in a day,” she said. “At the very beginning, it was purely my personal interest to reflect various flowers and birds on the rice-paper. However when time grows, it unwittingly becomes a big project.”

In order to reflect various flower shapes and bird images, Wan often goes to the zoo or park for sketches plus a diligent survey on a bunch of materials.

“Never think it is easy to paint a flower. It is not the simple drawing of several pedals and leaves,” she said.

“For me, it is more like a life circle — a process from the forming of a bud, to blossom and to fade. Each flower is a witness of life itself.”

Wan confessed that she interpreted the life and death more thoroughly in the past decade.

“Some of my good friends and relatives passed away in the past years,” she said. “Thanks for these paintings, I tried to accept it as a natural process, very hard yet very true.”

Wan said that she found all her inner power and peace in her paintings.

“Sometimes when I paint, I imagine myself as a free bird or a blossoming flower in it. I nearly forgot all the troubles, worries and pains.” 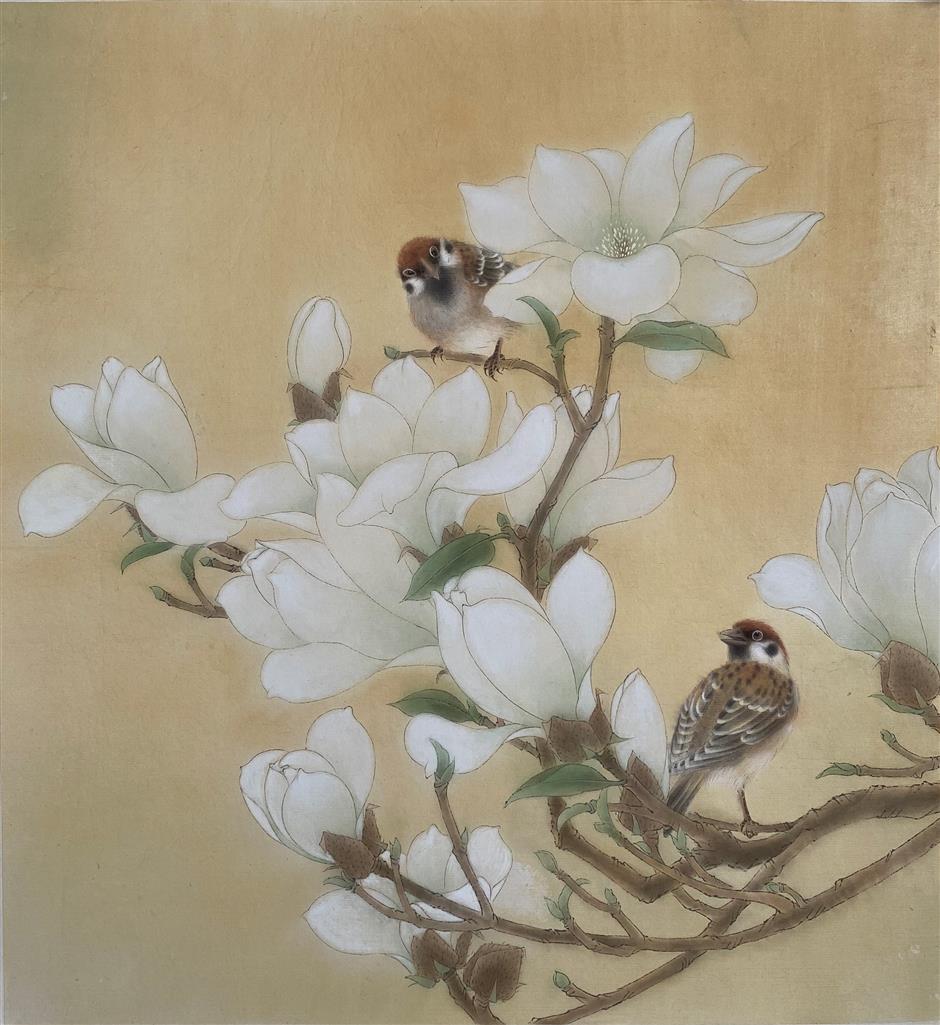 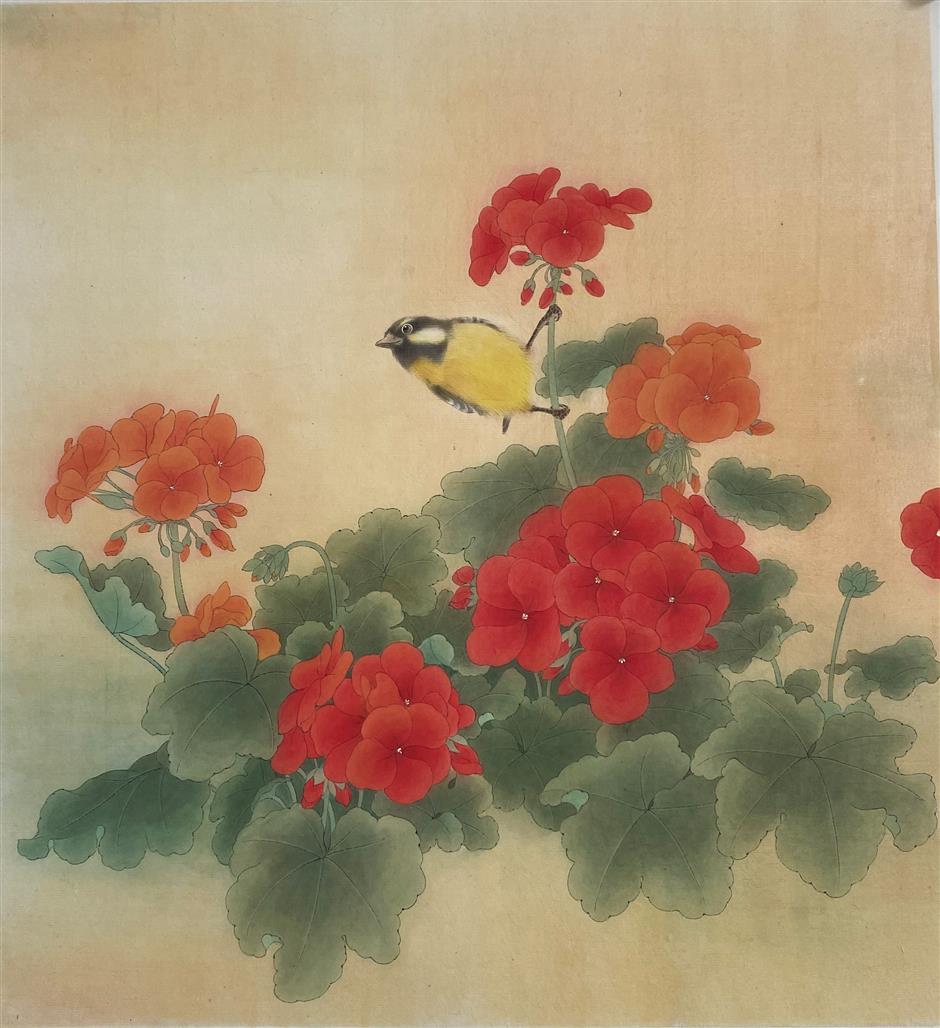 As an echo to the ongoing China Flower Expo on Chongming Island, Wan’s solo exhibition features 100 of her flower-and-bird paintings.

Wan breaks away from the traditional tableau and rearranges the world of flower-and-bird, making them bolder, using warm and cold hues that she meld harmoniously.

“Tradition is good, but it is too far from our modern life and aesthetic taste,” she said. “Sometimes I adopted some Western abstract style in the background to distinguish the lovely birds surrounded by a natural and dim world.”

For example, the highlight of the exhibition is a 5-meter-long and 2-meter-wide piece in black and white, quite different from the stereo-typed flower-and-bird painting in tableau and colors. The light and shadow in the painting is reminiscent of the impressionism.

Now a grandmother of two small grandsons, Wan said that painting was her leisure after the chores.

“As a female painter, it is not easy to balance between art and the family,” she said. “But thanks for the two naughty kids, I find the two facets of life. I can hide in a private art world of my own, while at the same time, experience another world of mundane life.”