What will the visual impact be when canvas is moving like a big wheel? Find out at "Synthesis" running at the Galerie Dumonteil through July 10.

French artist Ugo Schildge redefines his art in a language that distinguishes itself from painting. At first sight, his works are more than two dimensional.

And the interplay of pigmented plaster and concrete orchestrated by wood invites the viewer to explore the variations of form, texture and color. Some of the round-shaped canvases even move like a big wheel.

Born in 1987 in Paris, Schildge graduated from the Ecole Nationale Superieure des Beaux Arts in Paris in 2014. His work is mainly exhibited in Paris, Shanghai and New York.

Although his artworks look attractive, the paradox of forest fires, which is a main statement behind the artist's works, sounds even more fascinating.

In his eyes, the fire ravages, destroys and devours the environment and its inhabitants with great violence, yet it is also an integral part of the forest ecosystem.

Long-interval, low-intensity wildfires allow the forest to breathe; it fertilizes the soil and eliminates weeds and animal parasites.

Based on a similar concept, the artist uses the raw materials of construction sites – concrete, plaster and wood – to create a flower, a bird or a tree.

Just as the forest fires create a new chapter in the ecology of the forest, Schildge's creations bring the colorful and diverse forms to materials that might be perceived as rigid or cold.

Camouflage is used to show the presence of people and other animals. For example, in the "Jungle Bomb," the expressive power of vegetal elements takes precedence over a human existence in the form of a bust that merges with the landscape, making it almost invisible.

"I have always been interested in the distortion of images, such as hiding or emphasizing an image depending on your viewing angle. Camouflage is essential to my work," said Schildge. "Instead of hiding the idea completely, I prefer to cover a small part, maybe a secret or a taboo. And this can been achieved through camouflage." 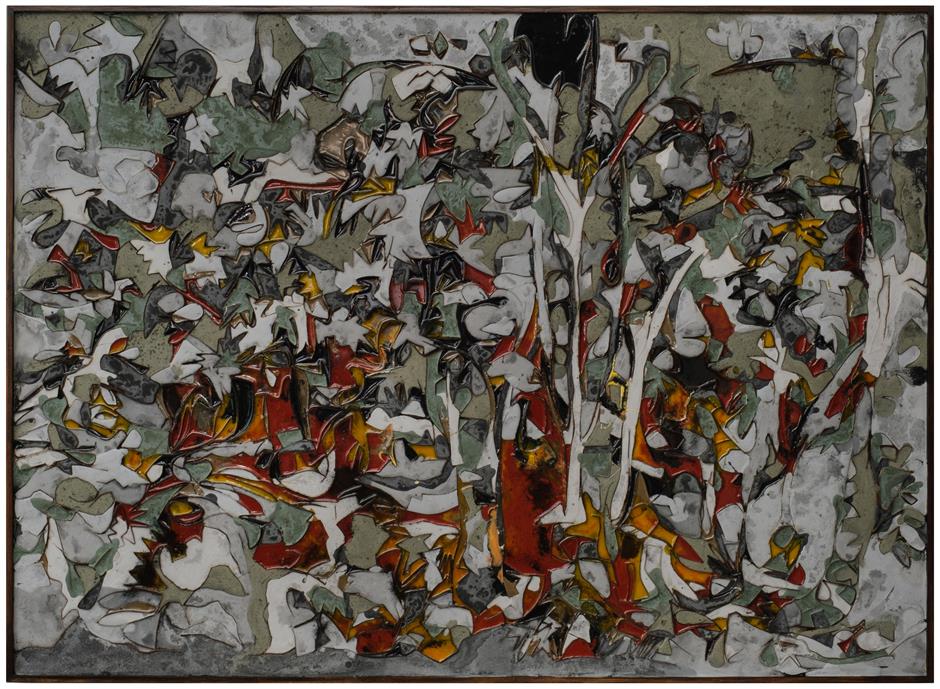 "After the Fire" by Ugo Schildge