Hangzhou wisdom and ingenuity on display

After months of restoration, the Wuhua Tianbao Exhibition Hall in Hangzhou Museum has reopened to visitors. Its 351 antiques and artefacts, including 14 national top-notch treasures and 13 national second-level antiques, display the historic development of the city and its rich culture. 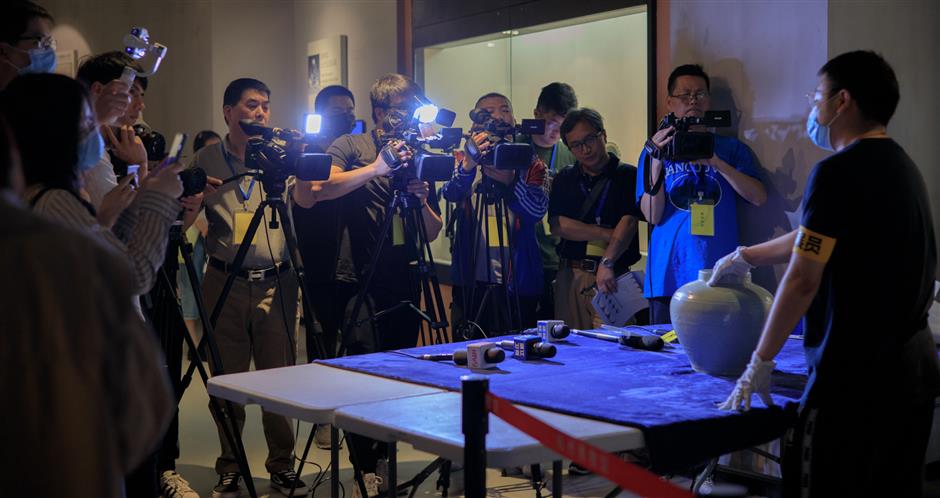 A museum employee shows one of the national top-level porcelain items to the media.

Each category has its own highlights that showcase the city's history and culture. The exhibition hall is regarded as an ideal venue to learn more about the salient archeological research in Hangzhou as all exhibits were excavated from the city and its surrounding counties.

Some highlights reflect the ancient Hangzhou people's wisdom and ingenuity.

In 1999, an ancient tomb of the Warring States Period (475-221 BC) was discovered at Banshan Hill. During this era, jade culture reached its heyday..

The excavation lasted over 10 years, many are included on the list of national top-flight treasures such as a patterned jade sword scabbard, jade accessories and jade pendants. 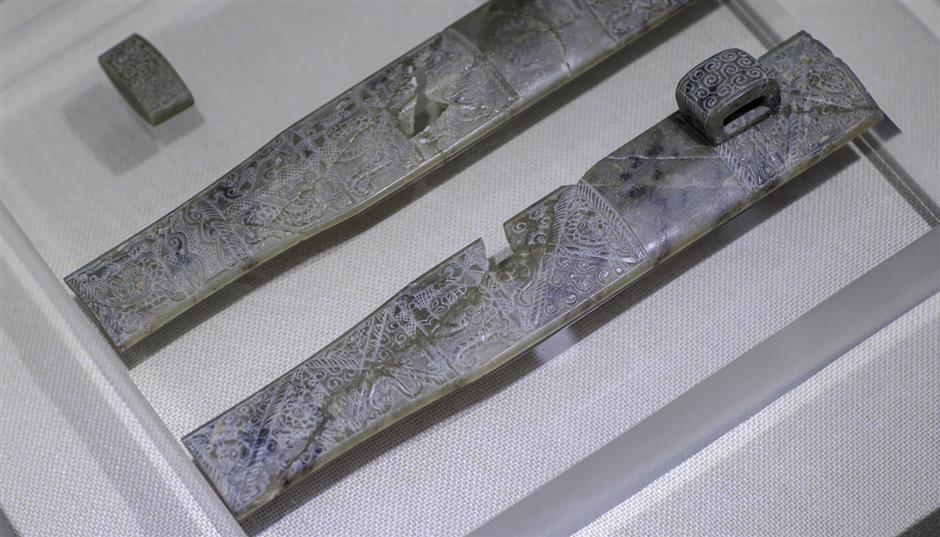 The sword scabbard on display features geometric patterns, auspicious clouds and snakes. In the Warring States Period, the Yue State, which is located in today's Jiangsu and Zhejiang provinces, took snakes as their totem. The smooth lines and refined patterns show the scabbard belonged to the nobility of the time.

This era was a prime time for forging bronze swords. Hangzhou, at the borders of the Yue and Chu states, became a strategic battlefield where wars frequently took place.

Along with the quickly developed bronze blacksmithing industry, craftspeople started to produce exquisite scabbards to protect and carry swords. In ancient times, a well-hammered sword and scabbard often symbolized a person's social status. Sometimes, they were a common accessory rather than a weapon for the upper class. 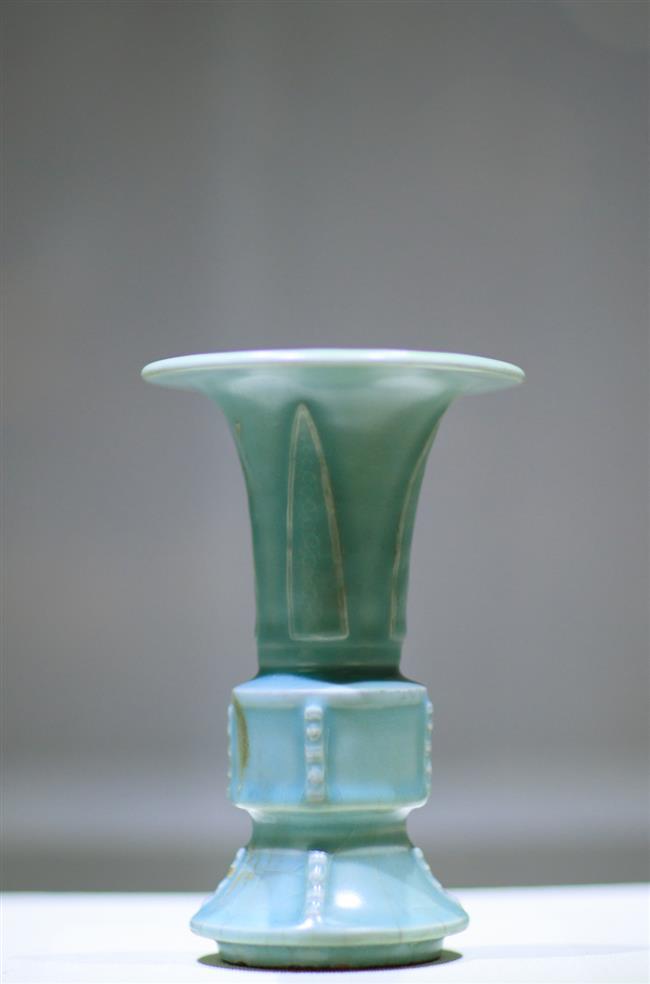 A top-level celadon item found when a company on Zhaohui Road was renovating its compound in 1987.

In 1987, when a company on Zhaohui Road renovated its compound, about 54 pieces of refined porcelain made in the Yuan Dynasty (1271-1368) were unearthed after being buried underground for centuries. Two of these items, both national top-level antiques, are on display at the new venue.

One is a grayish-green glazed celadon item. Ancient Zhejiang craftsmen integrated the techniques of northern and southern China's ceramic industries to develop multiple shades of green glaze and named them celadon.

Showcased is a qingbaici porcelain made in the Shang Dynasty. The design of that era puts emphasis on practicality and beauty.

They adjusted clay composition and glazing techniques to invent whitish-green and pinky-green varieties, as the exhibits show. Their elegant shapes and jade-like texture symbolized the peak of celadon techniques.

Another two exhibits demonstrate the porcelain designs of the era that emphasized both practicality and beauty.

One celadon piece imitates a Shang Dynasty (c.16th century-11th century BC) bronze vessel called gu (觚), which was a type of wine container and can be used during religious ceremonies to show the noble of the dead person. However, it is believed to be a vase from the Yuan Dynasty.

Another piece is called qingbaici (青白瓷), or green-and-white ceramic. Muted shades and quiet simplicity are the main features of this style. It fuses the characteristics of celadon and white porcelain and has been compared to jade because of the texture and finish. 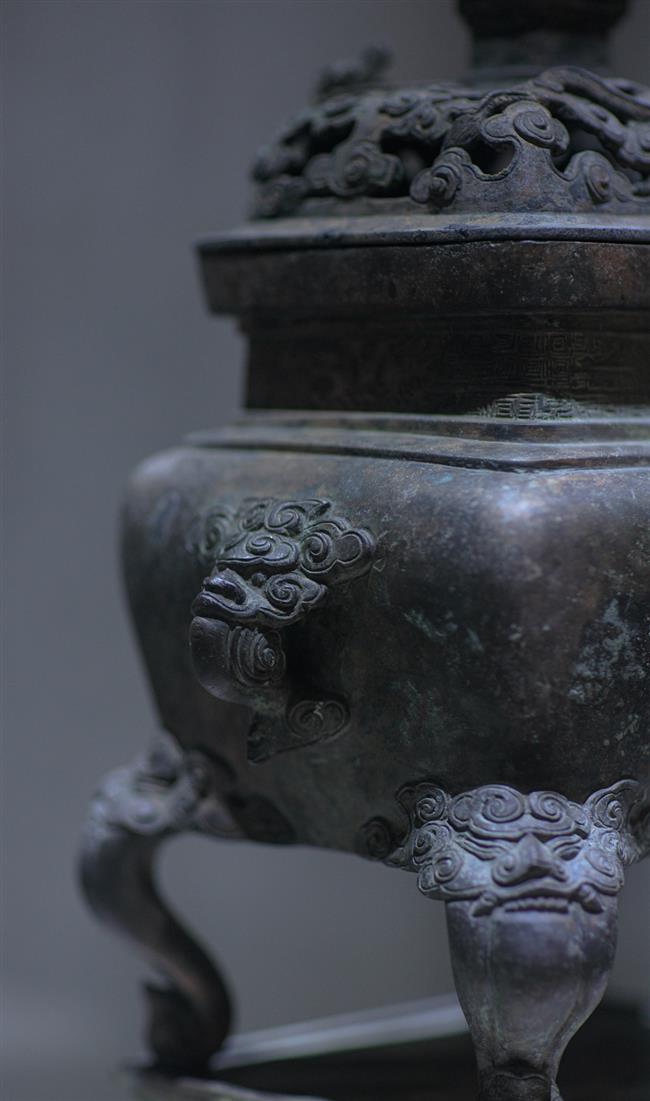 During the Five Dynasties and Ten Kingdoms Period (AD 907-979), the emperors of the Wu Kingdom, in present-day Zhejiang Province, adopted a peaceful strategy, so this era was comparatively devoid of war compared to earlier periods. This settled period laid the foundations for Hangzhou's prosperity.

During this period, Zhaoqing Temple was erected at West Lake and soon developed into a royal temple with flocks of devout believers. In 1926, the temple was dismantled for expanding roads.

In 1994 when the government combed through the ruins of the temple, a group of copper vessels were discovered from an ancient well. The exhibition displays a copper incense burner which was found in the well and made in the Ming Dynasty (1368-1644).

The incense burner has a lion on its lid and a body engraved with dragon and cloud motifs.

Before the Yuan and Ming dynasties, burning incense had long been considered conducive to create a tranquil environment and refreshing the mind. The practice reached its zenith during the Song Dynasty (960-1279) when it was part of the literati lifestyle.

With the social development, the censers were no longer exclusive to the upper class and scholars. Craftspeople made copper censers for Buddhists to burn incense in temples.

Another highlight on display has a lion on its lid, and the body is engraved with dragon and cloud motifs. The smooth curves and ornate patterns typify the superb skills involved in making copper vessels in ancient Hangzhou.