Hemudu Culture is a famous name in the world of archeology. Named after the homonymic village in Yuyao, Zhejiang Province, the culture can be traced back 7,000 years. It is one of the cradles of Chinese civilization.

Covering around 40,000 square meters, the Neolithic site was discovered by local villagers during construction of a drainage station in the summer of 1973. In the course of excavating its foundation pit, they found an array of boneware, stoneware, black pottery and animal remains in the layer 3 meters down.

The construction work stopped and the local cultural relics department invited the experts of Zhejiang Provincial Museum to examine on the spot and they did a test excavation.

The site was officially excavated for the first time from November 1973 to January 1974. In the 700-square-meter area, archeologists found a lot of relics.

The discovery was one of the most important archeological events in China in the 20th century. It made scholars aware of the significance of the Yangtze River in the growth of Chinese civilization. Previously, the focus was on the Yellow River in the central China. 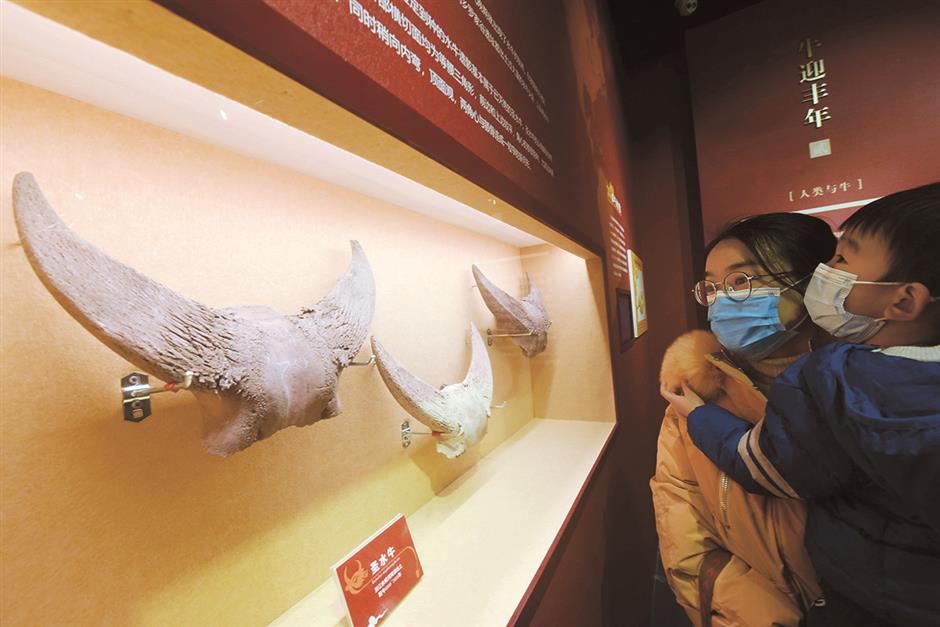 Visitors look at the bones of water buffaloes unearthed from the Hemudu Culture relics site in Yuyao, Zhejiang Province.

The second excavation took place from 1977 to 1979. Nearly 7,000 pieces of relics were unearthed in the two rounds of excavation. The findings include rice, husks, stalks and leaves. Some husks and leaves still have their original appearance and color. The hull pubescence still can be clearly seen. The rice is identified to be late indica, which is the earliest cultivated rice in the world that has been found so far.

Apart from rice, archeologists also unearthed 99 spade-shaped farm tools, which were used to dig earth. The tools are made of the shoulder blades of deer and buffalo. The discoveries of rice and farm tools prove that the primitive inhabitants had already grasped the methods of paddy cultivation.

Hemudu people also reared animals. The bones of dogs, pigs and water buffaloes were discovered at the site. The number of pig bones was the largest.

One of highlights of the relics was construction components with mortise and tenon joints, which are the earliest pieces of wooden architecture ever found in China. Plenty of wooden house foundations were unearthed at Hemudu archeological site as well. The ancient people in the age of Hemudu culture built their homes on stilts, which not only prevented the damp and humid air, but also protected them from wild animals like snakes. The architecture shows the wisdom of ancient Hemudu dwellers.

Illustrating the aesthetics of the Hemudu people, decorative objects made of jade, teeth, horns and stones are great in variety with refined craftsmanship.

A total of 35 decorative objects made of various materials are all designed into the shape of butterfly. There is not yet a definitive statement about the usage of the objects.

One of representative ideas put forward by the archeologist Wang Renxiang says that the butterfly-shaped objects are used to give balance to spears and increase the hit rate.

Ethnoarcheologist Song Zhaolin believes that the butterfly-shaped objects are used to decorate the wooden poles of their architecture.

A butterfly-shaped object made of ivory is polished and engraved with a couple of flying birds looking back to each other. In the middle of the birds is a symbol of the sun.

Among the 35 butterfly-shaped objects, the one made of ivory is the most exquisite. The artifact is 16.6 centimeters tall, 6.3 centimeters wide and 1.2 centimeters thick.

One side of the artifact is polished and engraved with a couple of flying birds looking back to each other. Similar to eagles, their beaks are curved and with sharp edges. In the middle of the two birds, the artifact features five concentric circles, which symbolizes the sun. A pattern of flame "burns" around the sun. The other side of the object is poorly crafted.

In order to hang the object, six holes are drilled symmetrically at the upper side and the lower side of the artifact.

It is obvious that the object is not a practical ware but an ornament with special meaning.

The ivory butterfly-shaped object is now collected at Zhejiang Provincial Museum and becomes one of 10 highlights of the museum.