Heroes of 'catching mice in a china shop'

"Catching mice in a china shop" is a popular metaphor coined by Chen Yi, the first mayor of Shanghai after the founding of the People's Republic of China. It describes the strict military discipline needed by the People's Liberation Army (PLA) to defeat the forces of the Kuomintang in 1949 without damaging the city or its residents.

To mark the 72nd anniversary of Shanghai's liberation, a series of mini documentaries has been unveiled to present that history from the perspective of the Westerners, including diplomats, journalists, doctors and businessmen.

Comprising six episodes, the series entitled "Witness A New Dawn" highlights the social and political situations in the days before and after liberation. It shows how the Communist Party of China won not only the battle but also the hearts of the public.

"We welcome the change that has come about and hope that the arrival of the PLA will mark the beginning of a new era – an era in which people of China can now begin to enjoy the benefits of good government," wrote John William "Bill" Powell, US editor of the Shanghai-based, English-language China Weekly Review in May 1949.

The series also draws on memoirs, diaries and oral histories of people who were living in Shanghai at that time. 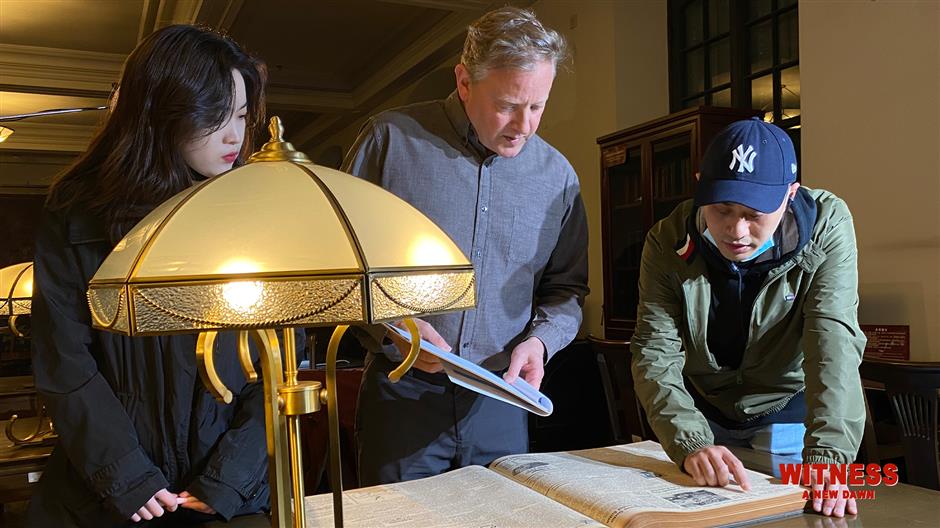 Browsing through historical records at the Shanghai Library Bibliotheca Zi-Ka-Wei are (from right) Wang Xiangtao, director of "Witness A New Dawn;" Andrew Field, presenter of the documentary; and assistant director Ding Yiran.

Produced by Shanghai Media Group, the series is directed by Wang Xiangtao, a filmmaker at the group's documentary center.

During the war, J.B. Powell was an outspoken supporter of China, writing many articles denouncing the aggression of the Japanese army. After Japan attacked Pearl Harbor in December 1941, J.B. Powell was incarcerated in a Japanese prison camp in today's Hongkou District and badly tortured. He died in 1947 at age 59.

"Thomas Powell didn't know a lot about his grandfather since J.B. Powell died early, but he had a number of old photos and one of them that featured the Embankment Building in Hongkou captured my attention," said Wang, 38.

Bill Powell, who inherited the weekly from his father, once lived in the Embankment Building. From that vantage point, he told his son Thomas, he witnessed part of the battle for the liberation of Shanghai in 1949.

According to his son, Powell recalled that a standoff between the KMT and Communist armies at Suzhou Creek lasted almost two days. Despite heavy casualties, the People's Liberation Army on the south bank waited patiently and then chose to encircle the enemy instead of using artillery to blast its way through. No one in the Embankment Building was hurt. No dinnerware in the china shop was broken.

Wang, a history buff as well as a filmmaker, was so moved by the people-oriented philosophy of the Communist Party that he began collecting historical records related to expatriates living in Shanghai at the time.

"Reviewing history through the eyes of expatriates is like having a third-party perspective, which tends to be objective," said Wang.

Wang spent his leisure time doing research in libraries such as the Shanghai Library Bibliotheca Zi-Ka-Wei, which first opened in 1847 and is a repository for English-language material pertaining to China.

Wang discovered that about a third of the 1,000 residents living in the Embankment Building around the time of the city's liberation were foreigners.

"I didn't know before that there were so many foreigners here," Wang said.

After years of work, Wang published a book called "Shanghai Liberated" last year. He then adapted the text to the mini documentaries, each spanning around five minutes.

"It is difficult to tell history in such a short time," said Wang. "In order to grab viewers' attention, we choose six Shanghai landmarks as entry points for each episode."

A netizen called Teng left a message after watching the fourth mini-series episode about the Amethyst Incident.

"I often run along the Minsheng Wharf, but this is the first time I have heard of its history," he wrote, adding a "thumbs up" emoji.

The Amethyst was a British Royal Navy ship that sailed from Holt's Wharf in Shanghai en route to the Yangtze River and then upstream to Nanjing in April 1949. The ship left despite repeated warnings against the trip from the People's Liberation Army.

The sloop was hit by gunfire and grounded, forced to raise a white flag. A few days after the incident, all foreign warships were moved out of the Huangpu River. The incident was a great morale boost for the Chinese residents.

"In the series, what impressed me most was how the PLA soldiers were so disciplined and how they were instructed to cause as little harm to the city and people as possible," said Wang. 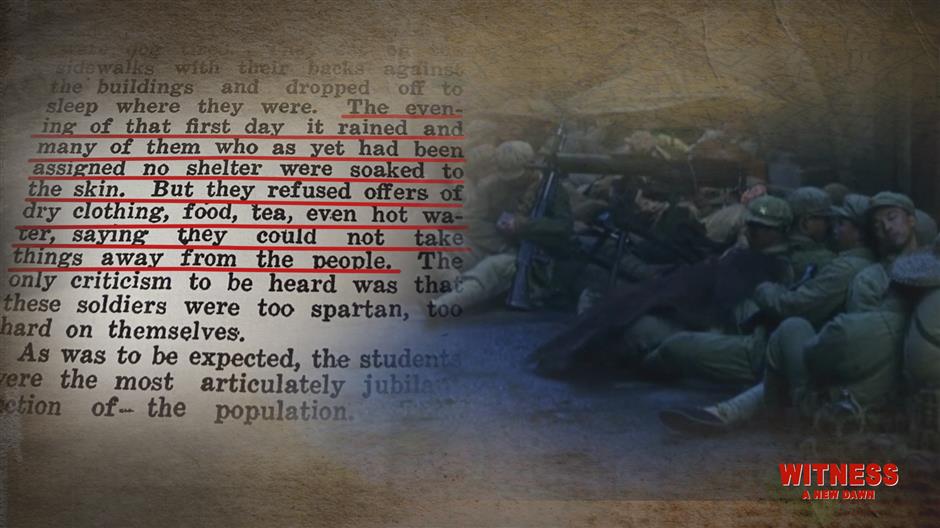 The documentary displays a touching portrayal of PLA soldiers from a feature story entitled "The Liberation of Shanghai," published by China Weekly Review.

Wang said he knew from childhood textbooks the story of PLA soldiers sleeping outdoors on Nanjing Road, instead of finding beds in hotels or in private homes. But that story became more vivid when he read an account of it by American journalist Harrison Forman.

At that time, many foreign reporters in Shanghai were writing positive news stories about the Communists. The China Weekly Review, for example, recorded that the PLA soldiers refused offers of dry clothing, food, tea and even hot water, contending they could not deprive local residents of such necessities.

The glowing press coverage aroused the suspicion of foreign editors. Reporters in Shanghai were under "no Red pressure," then AP Bureau Chief of Shanghai Fred Hampson wrote. According to Hampson, the good coverage resulted from the sharp contrast between the old and the new in China.

"From this, we can see that the Communists indeed managed the city well," said Wang.

The mini documentaries are presented by Andrew Field, an American scholar of Chinese history and culture. He has lived in Shanghai for about 25 years.

"People might find a sense of distance from the history of the city's liberation, but Field's presentation engages viewers and takes them back to the past," said Wang. "I hope the series of mini documentaries will enlighten more people about this chapter of history."