Qiantan Center offers a show of the irresistable temptation of art

Even at first sight, few would resist the temptation of Shinji Ohmaki's Liminal Air series.

As one of the pioneers of Japanese contemporary art, the world renowned artist is landing another version of his Liminal Air series in the Qiantan Center along the bank of Shanghai's Huangpu River. 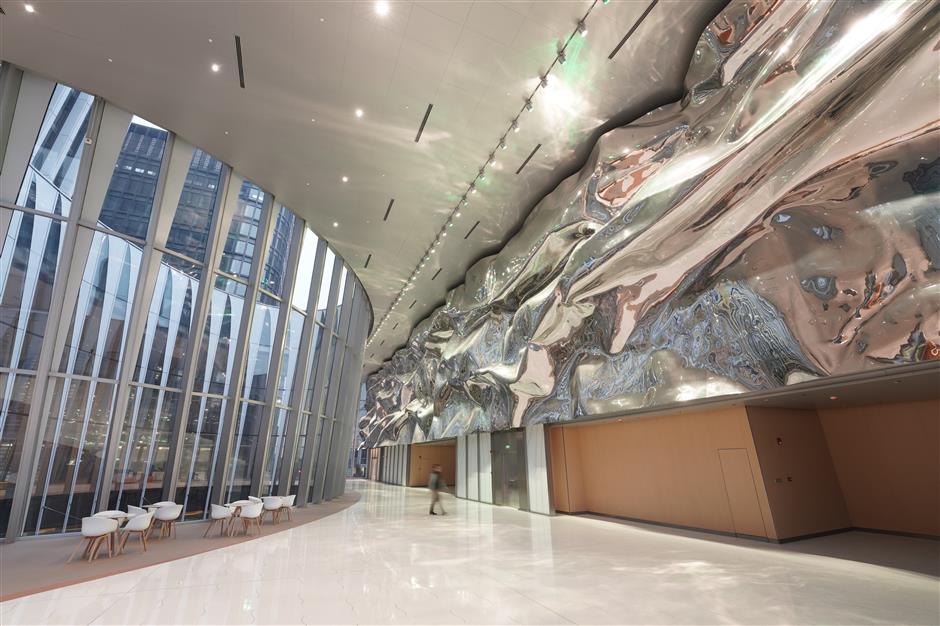 Many might still remember his large-scale installation work "Liminal Air Space-Time" at the Art Basel Hong Kong in 2018 or Mori Art Museum in 2015, where a piece of transparent cloth moved up and down, causing a fluctuation of the borders that divide various territories. Based on the wind produced by a well-calculated computer programing, Ohmaki materialized the airflow and recorded the subtle changes under the erosion of time.

Born in 1971 in Japan, Ohmaki actually felt lost after high school. Although he decided to enter the Academy of Fine Arts, he had no idea of which subjects to choose. Then he asked for the advice from Yoshitomo Nara who had tutored him before. Nara suggested he select sculpture because Ohmaki was interested in three-dimensional work.

As a result, he studied sculpture and later embarked on an art path of "shape of feeling."

This time in Shanghai, Ohmaki is facing a 400-square-meter wall inside an office building.

"Prior to the construction of Qiantan Center, we already began to work on this public artwork," said Robin Wong, head of the curatorial execution team at Art Pioneer Studio. Invited by Art Pioneer Studio and Shanghai Lujiazui Group Co, Ohmaki took part in this project at an infant stage.

"This work seemed to 'grow' together with the building," Wong said with a smile. "Even though I am quite experienced in producing public artwork, doing a piece like this really demanded a heavy workload on our employees and strong financial support."

It took more than 100 workers nearly 27 months to implement, not to mention the difficulty during the epidemic situation. 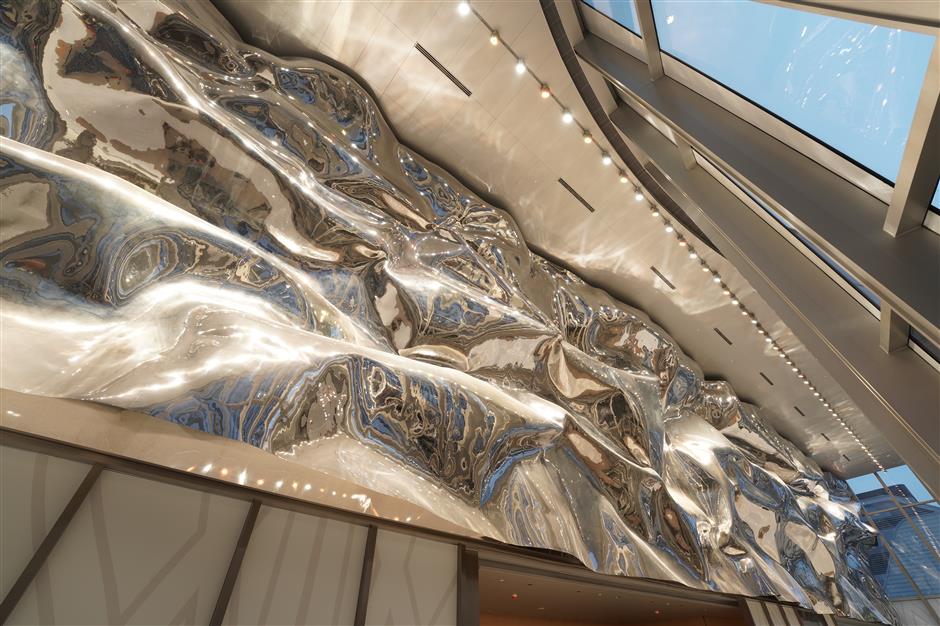 Each curve and bend in Ohmaki's "Liminal-Space Figuration" is purely hand-made.

Ohmaki continues his "legend" in Shanghai. The dazzling work "Liminal-Space Figuration" in the shape of silver sea waves renders a dynamic visual impact to the viewers.

Each plate of 315.6 centimeters by 775 cm was sent to a manufacturing plant in China for manual work at the bidding of Ohmaki.

Then the 2-ton plates were sealed together on the wall. Merely the installation took three weeks to complete.

Because of the final visual effect, 200 lights have been installed, which according to the artist is "an indispensable part in this work."

They conjure up nine different light and shadow during the day, which might perfectly echo the artist's idea of the work. 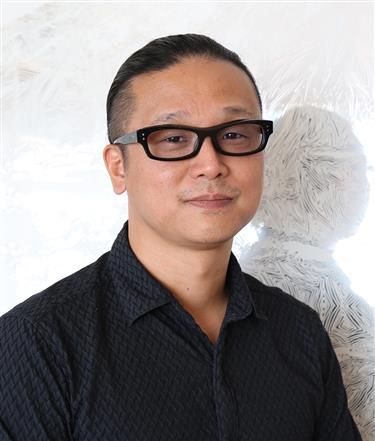 Q: In your eyes, what is the most important thing in a piece of public art?

A: One of the important things for public art is that it is a symbol for ordinary daily life, or to be more exact – "not so mundane."

In fact, a piece of public art could connect with everyone and accept every one. The core of public art is nothing about politics or religion, but instead, it transcends them all.

Q: What's your idea in your newly implemented artwork "Liminal-Space Figuration" in the Qiantan Center?

A: This work is inside an office building, whose design concept originated from water and stone.

As I tried to strengthen that concept through my artwork, "how to conjure up a relation between my work and nature" and "how to symbolize nature through my work" were my concerns.

When exploring these answers, I also considered how to awaken nature. Of course, nature is totally out of control by mankind. That's why we, human beings, should examine ourselves, pondering how to face nature and interpret nature.

Through this work, I wanted to reflect the process of switching by presenting "a flowing energy" in front of the viewers. Under the seasonal changes in a certain environment, I like to connect those passersby with the special trait of this architecture.

Q: Due to the outbreak of COVID-19, did you have any difficulties in implementing the work?

A: I have been focused on corporality in my art creations. I prefer face-to-face communication. But due to the outbreak of COVID-19, nearly all the job became remote work. The time and the scenario are different, including this interview. It is interesting, yet sometimes I feel it hard to fully convey my ideas via the screen.

The most painful part for me in this work is the adjustment of lighting. Although I could give my remote guidance on the production, yet it became so difficult especially for the lighting part. Because what you see on-site is utterly different from what you see on the screen.

In fact, the lighting were processed and adjusted through camera lens. But this is a piece about personal experience, unfortunately I was unable to experience it on site, what a pity!

Q: Is there any connection between this new work and your Liminal Air series?

A: This is a derived work from the Liminal Air series. I probed into some daily elements including material, wind and light in Liminal Air series – how they existed in a dimension different from our values. The challenging series explores field domain, material, space and boundary through various modes in different venues.

The artworks are composed of space and sculpture that would be savored by the viewers.

This work is an exploration toward the multi-facets of the space itself. Sometimes a space would alter under different seasons and time. The border would be destroyed when an interactive relationship between man and the space occurs so that man will be connected with the environment. Once entering into the building, colors and shapes mingle together, which would make people realize that they are, indeed, an original part of the energy in this world.

Q: How do you interpret the relationship between the artwork and the corporality?

A: Viewers often interpret a piece of artwork based on their own experiences. When we create an artwork in a space, we are actually providing a kind of fresh experience to them. Those who are ready to receive such new experiences always bring their own inherent experience on site. So the artwork is a mechanism to look back on oneself with a new understanding.

There is a very important subject in this work – how to transform a stainless steel plate, a man-made production into a thing of nature.

I needed to fuse changes, to impose energy, and to make it close to a thing of nature. To confront this plate, to knock it, to bend it, ... and the whole process was akin to create a sculpture.

This work also expresses a switch of energy among the material and the force of gravity. Think of the seemingly flat ground now, perhaps 10,000 years later, will give a new outlook where much of the land would be underwater; and I just speed up the process of time in my work.

For me, all those that are in this time and space becomes a part of the work. Those possible happenings in the meanwhile, whether it is a phenomenon, a person, or an interactive look at the things around, form the entire work.

I would like to compare this work with a river; and it is impossible to divide a river into pieces under the erosion of time. This is an eternal flowing river, the tree of life, the running waterfall, which continuously let people notice the subtle changes in this seemingly unaltered building.

Q: What's your next project?

A: In 2022, I will have a solo exhibition in an art museum in Sichuan, but I am sorry that currently I can't reveal more details.