China's only empress' wooden 'Palace of the God of Everything' 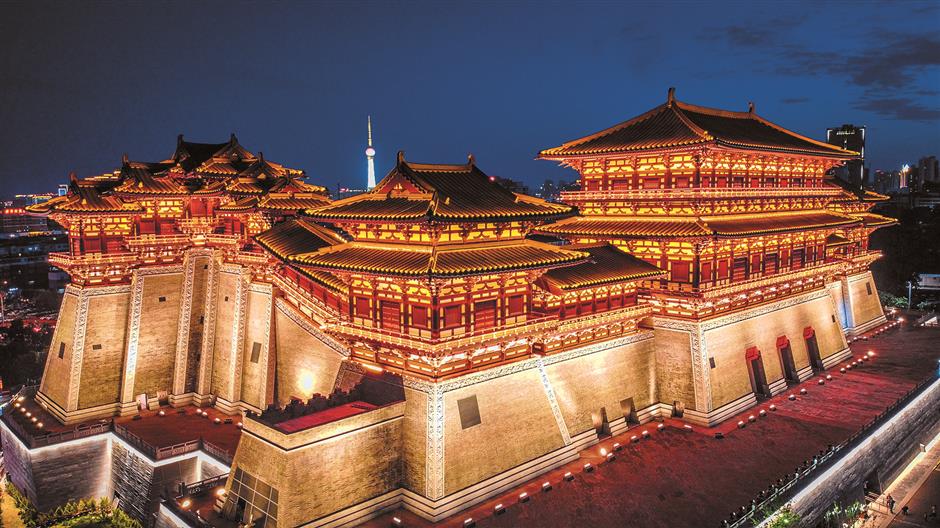 Built by China's only empress Wu Zetian (AD 624-705) and burnt down by her toy boy seven years later, Mingtang Hall in Luoyang City was once the emblem of supreme power and also the witness of royal scandals.

Built by China's only empress Wu Zetian (AD 624-705) of the Tang Dynasty (AD 618-907) and burnt down by her toy boy seven years later, Mingtang Hall in Luoyang City, one of China's four ancient capitals, was once the emblem of supreme power and also the witness of royal scandals.

As the landmark of ancient Luoyang in Henan Province, the hall – or tower to be specific – was 98 meters tall and covered 12,000 square meters, making it the world's biggest wooden structure at the time, and the pinnacle of Chinese architecture.

Mingtang Hall was once a ritual place for monarchs to discuss, explain and declare political doctrines.

It existed in almost every dynasty. Wu's Mingtang Hall was set up in AD 688, also called the "Palace of the God of Everything."

With three levels, the square base floor that represented the four seasons was used to issue regulations and laws, and the middle level a 12-sided dodecagon, representing the 12 hours in ancient Chinese timekeeping, was the place to worship ancestors.

The round top level, supported by nine dragons, was a pavilion, where the country's most powerful woman Wu could have a bird's-eye view of her territory.

A giant wooden post with a 15-meter circumference stood upright from the bottom to the top, working as the backbone of all the beams and brackets.

According to the archives of the Tang Dynasty, such a big post required more than 1,000 workers to move and pull at the same time.

The size and complexity of the construction surpassed all the other buildings of the Tang Dynasty, and its engineering and techniques ranked among the best of ancient Chinese architecture.

In the spring of AD 688, Wu, who had just stepped onto the throne, wanted to open a new era for herself. She torn down the old palace and ordered to build a bigger one – Mingtang Hall.

In the feudal China, it was hard for a woman to become a supreme ruler.

She changed the reign's name, invented new words, made up myths about herself and set up Buddhas with her face throughout the country, trying everything she could to make the people accept a female emperor.

And the construction of Mingtang Hall was the biggest move and in spite of officials' objections.

To get him into the palace easily, she asked Xue to shave his head and disguise himself as a monk.

With the full control of the politics, Wu was having ever more beautiful and younger boys.

Feeling left out and angry, Xue set fire to the Mingtang Hall and Sky Hall in AD 695. Both burned to the ground.

About 1,300 years later, a construction project was about to begin at the junction of Zhongzhou Road N. and Dingding Road. A worker found several weird-looking bricks. With further digging, an old wall was uncovered.

The bulldozers all stopped and the project was halted.

Archeological experts arrived. After several months excavation, it was found to be the relic of Wu's Mingtang Hall, which echoed with the discovery of Sky Hall in 1975, which was just several hundreds meters away.

The relic site was an octagonal stylobate, 4.06 meters deep and 9.8 meters in diameter. It proved to be stylobate of that giant wooden post.

Today, the relic is protected by a glass shield. It's open to visitors, who can walk on the glass floor to have a close look at the marvelous giant base.

The local government rebuilt Ming tang Hall and Sky Hall in real size beside the original site. People can also climb to the top level and have a panorama of modern Luoyang City, like Wu had done centuries ago.

﻿
Special Reports
﻿
61865
,
Exploring evolution through ancient art
China's only empress' wooden 'Palace of the God of Everything'
Heroes of 'catching mice in a china shop'
Take a trip through the universe with flowers
Kids wake up to classical music with 'Sleepover at the Museum'
Double bill ends Shanghai Biennale session
Gucci's centennial tour makes a splash in city
Ancient site reveals clues about early China
躺平 lie down, slouch in bed, extension for NEET
Kids Museum of Glass opens in Shanghai
EXPLORE SHINE