Do you like classic jazz? If so, then "April in Paris" might be just right for you. This exhibition features nearly 40 portraits of jazz masters over the past decades.

The title "April in Paris" comes from a classic jazz standard of the same name. Composed for a Broadway musical in 1933, it was either sung or played by nearly all the musicians portrayed in the exhibition.

The painter is Lin Dongfu, who was born in Shanghai in 1957.

Often appearing in a well-ironed suit and hat, Lin, who previously worked as a dubbing artist for foreign films, TV host and as an actor in films and TV series, rather surprised many with these distinctive portraits, whose facial expressions and gestures are vividly depicted.

Lin's love for drawing started in childhood, and he persisted with the hobby as a young man, learning to sketch by himself.

Although he led a quite successful career on the big and small screens, he never forgot his passion for art.

In 2013, he returned to painting and learned from Italian painter Matteo Massagrande, who was two years his senior.

A fervent fan of blues and jazz, Lin chose the legendary figures in the field as the subjects of his paintings.

"They were all jazz masters, legends whose achievements set the milestones in the development of the genre, from classic blues to swing, to modern jazz," Lin said.

"Most of these talented musicians were black, and their careers coincided with the darkest era of racism in the United States of America; thus their music was widely disparaged as the 'devil's music,' and many lived miserable lives."

According to Lin, other than the solace of music, many of them became lost in addiction to alcohol and drugs, and several died too young.

But in Europe, and especially in Paris, they received unprecedented respect and praise. It was in Paris that they had the best time of their lives.

"Some of them moved to Europe permanently, and lived in Paris," he added. "I wanted to pay my tribute to Paris, for the jazz it nurtured, through this exhibition."

For those who don't have a solid knowledge of jazz music, these portraits are not familiar, yet the quotations written on the wall, which partly reflect the jazz masters' attitudes and interpretations toward jazz, might ring a bell.

For example, Stephane Grappelli, a jazz vocalist, says: "When I improvise and I'm in good, I'm like somebody half sleeping. I even forget there are people in front of me. Great improvisers are like priests, they are thinking only for their god."

Jimmy Rushing, a vocalist and pianist, says: "The blues comes right back to a person's feelings, to his daily activities in life..."

For jazz lovers, if the exhibition is too quiet, then the House of Blues & Jazz opened by Lin, at 70 Fuzhou Road, might be an alternative to fully appreciate the charisma of jazz music, along with a drink. 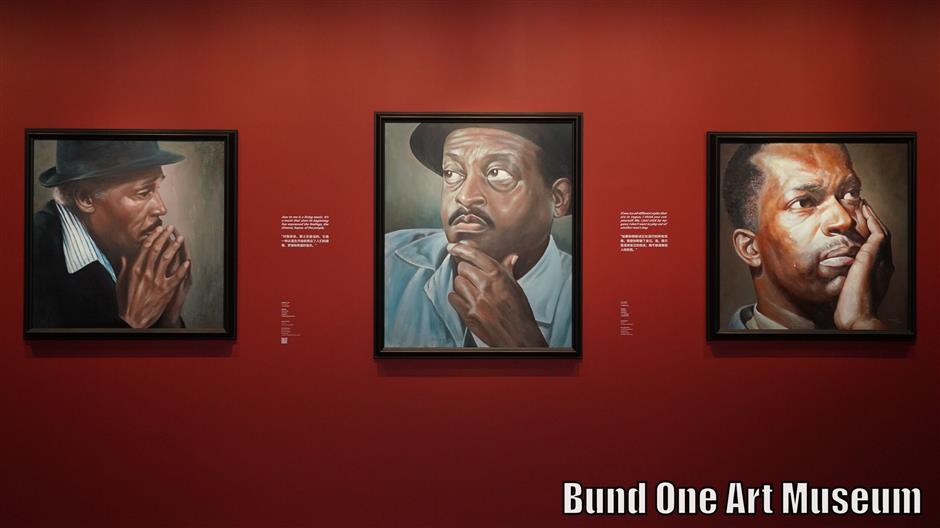 About 40 portraits of jazz masters are on show at the "April in Paris."