Opera sketches of scenes and backstage activities provide good training for painters. They require keen observation, a quick mind, a nimble hand and undivided attention for the duration of a show.

With lines that are soft or straight, thin or thick, smooth or coarse, hurried or slow, the opera sketcher teases out the inner world of opera characters.

"Sketches present the most natural, unadorned status of a performing stage," said Zhu Gang, who has been painting traditional Chinese opera figures for decades.

He often ventures backstage to see how the artists prepare for their performances, and when viewing a show, he sits in a front-row seat to get an intimate view.

"Quick, accurate sketching skills are important, but what's more crucial is a deep, thorough understanding of the opera itself, including its costumes, make-up, plot and characters," Zhu explained.

Traditional Chinese opera is rigidly stylized in both performance and costumes. No matter what the season or setting, the costumes differentiate age, gender, nationality, social status and wealth.

Patterns are telltale. Dragons appear only on robes worn by emperors. Phoenix are reserved for the clothing of empresses. Pythons adorn the dress of high-ranking officials. In addition, there are birds, fish, clouds and water elements used to distinguish different, sharply separated social groups.

The opera performances are a combination of singing, recitation, acting and acrobatics. Due to space limitations, performers can't rely on a multitude of props and scenes to carry the story. Their acting ability is paramount.

A whip, for example, may symbolize a horse in a performance. Different hand gestures with the whip show whether a horse is trotting or stopping or being prodded.

Acrobatic fighting on stage is not real martial arts. It's highly stylized with designed routines.

The opera sketcher has to absorb all these different elements.

"Thus, to watch and understand opera is the precondition for a good opera sketch," Zhu said.

In the Peking Opera "Fifteen Strings of Coins," Lou A'shu is a thief and murderer. Zhu depicts Lou with an inclining body and a cunning look.

In the opera "Romance of the Western Chamber," Hongniang, a lady's maid, helps Lady Cui Yingying meet her secret lover Zhang Sheng. Hongniang is depicted as joyous with a shy smile with Zhu's hand strokes. 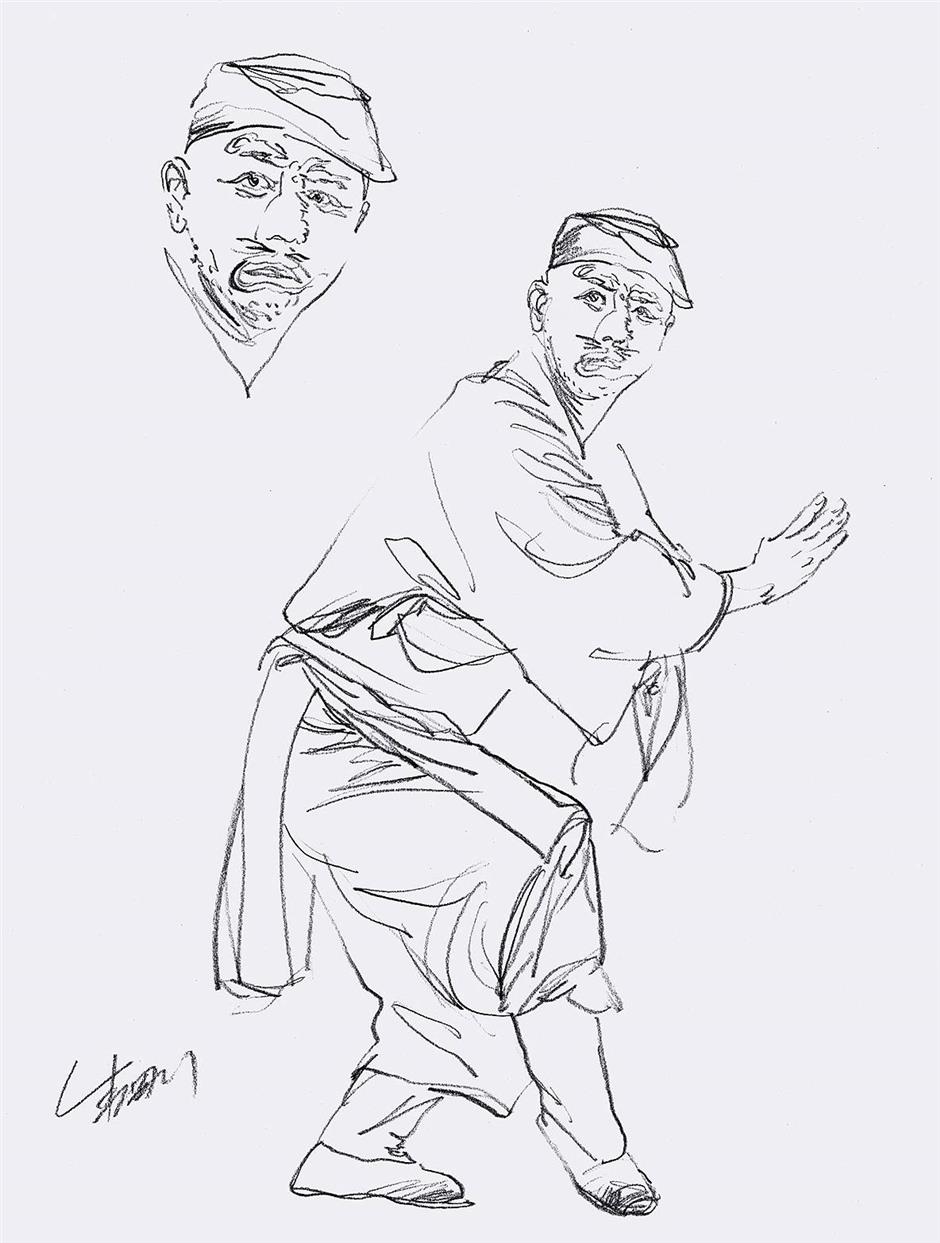 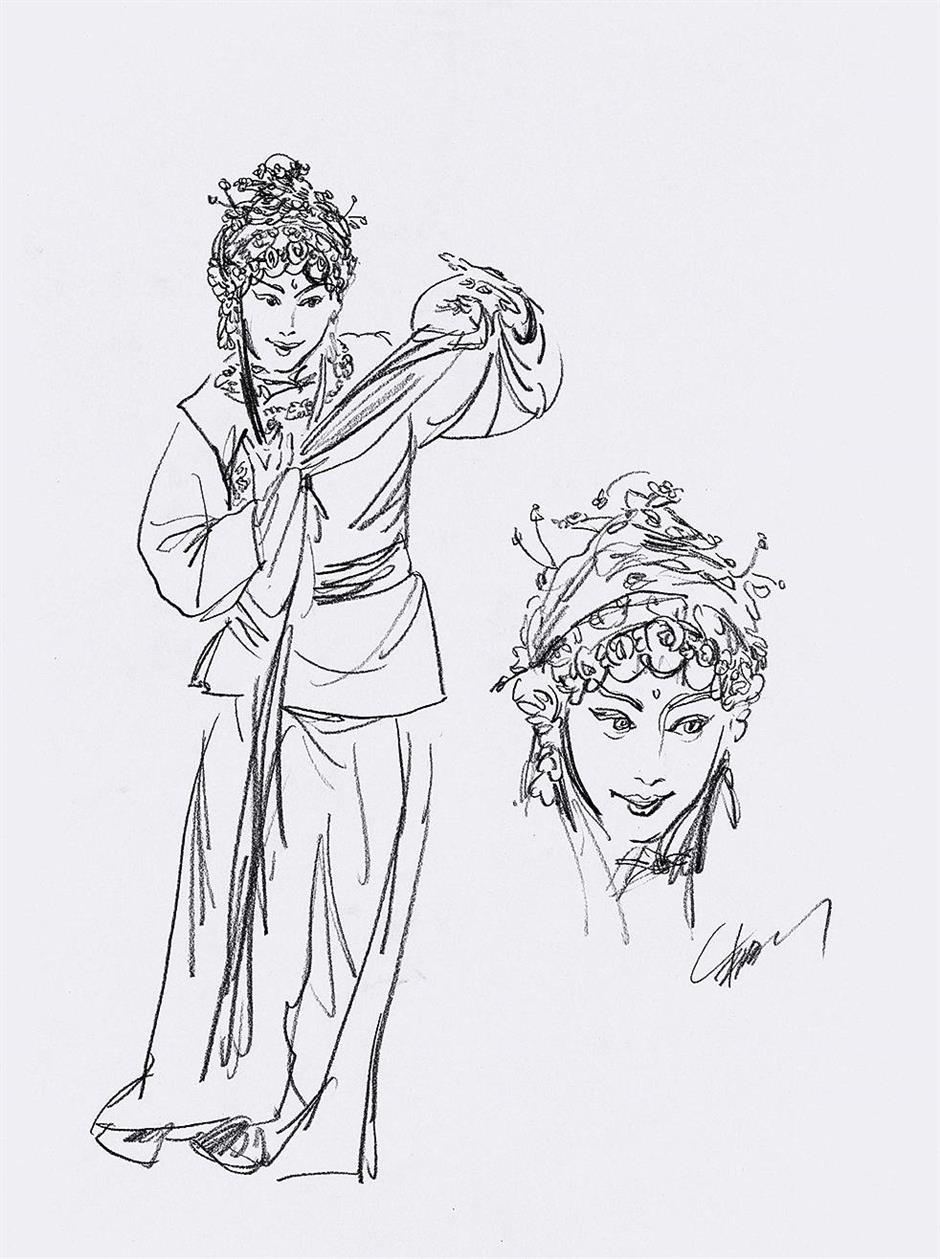 The opera "Broken Bridge," based on the legend of the "White Snake Lady," tells the sad love story of the scholar Xu Xian, who saves the life of the White Snake Lady. In gratitude, she turns herself into a beautiful mortal, falls in love with the scholar and marries him.

The couple live happily by West Lake in Hangzhou until the monk Fahai arrives to end it all. Insisting that humans and immortals cannot marry, he tries to split them apart.

In another twist to the tale, Fahai was once a turtle secretly in love with the white snake. He pursued her relentlessly for centuries.

The monk and the white snake have a big fight outside Jinshan Temple. In a rage, she summons her magic powers to flood the temple, a severe violation of heavenly rules. Many nearby residents are killed.

Zhu depicts the White Snake Lady in a giant cloak. Blazing with anger and anxiety in her eyes, she has just returned from the battle with the monk. She is looking for Xu to bid him farewell because she has been condemned to be chained in the tower of Jinshan Temple for another 1,000 years.

The simple, clean lines on her cloak express softness and tenderness, and give the impression of her flying hurriedly and nervously into the sky. 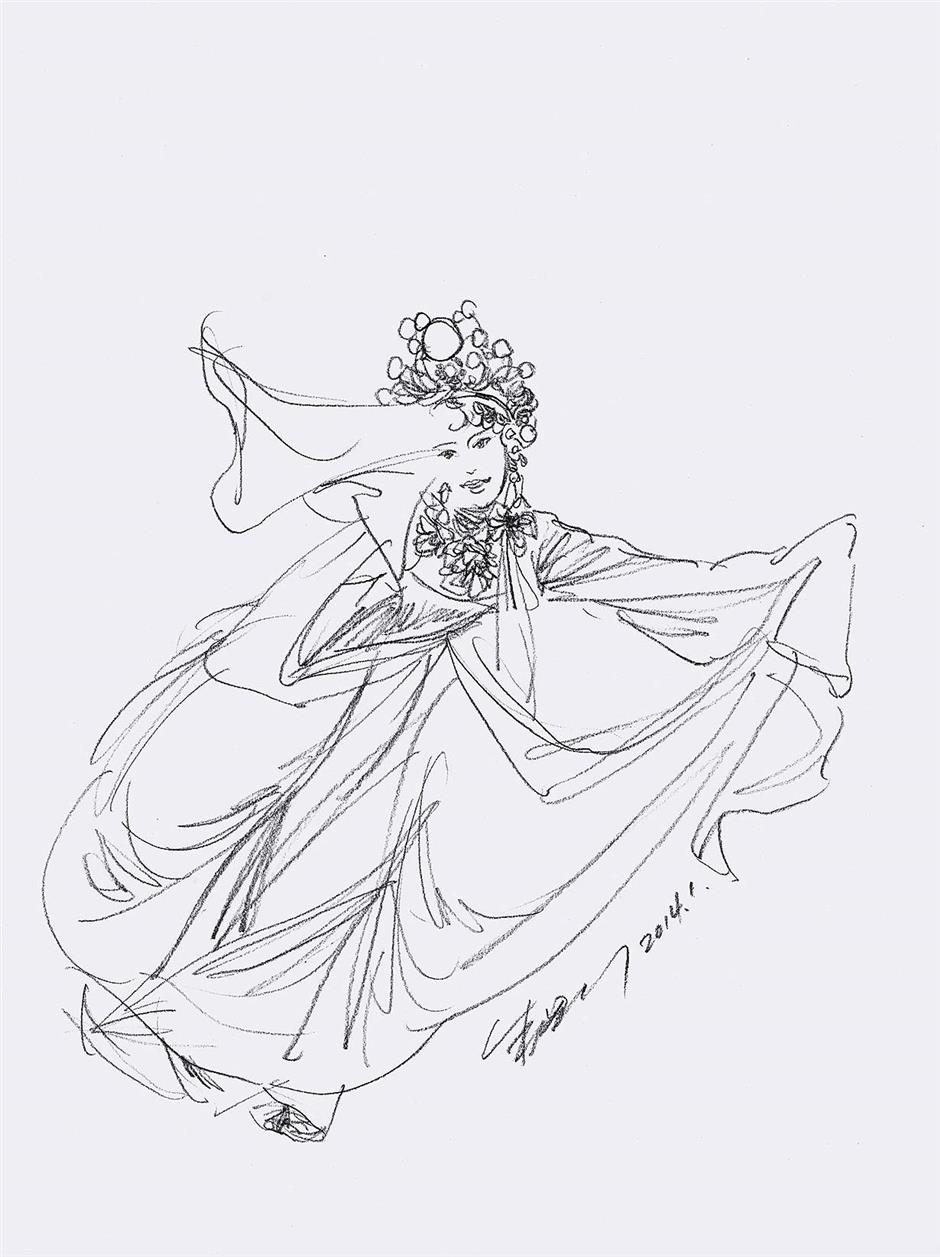 "Water Margin," one of the "four great classical novels" of Chinese literature, tells the Song Dynasty (960-1279) story of 108 outlaws who gather at Mount Liangshan to take up arms against the government. The group later surrenders and is granted amnesty so its members can fight alongside government troops against peasant rebels.

The novel, attributed to Shi Nai'an, is filled with expressive characters, dramatic conflicts and an engaging plot. It has been adapted into Peking and Kunqu operas.

Shi Qian, though lowly in the ranks of the outlaws, is special. He is a talented thief who has stolen vital information from the government army. Thief or hero? It's all up to viewers.

Zhu captures the very moment when Shi successfully steals military information. He points with two fingers of his right hand, while the left hand closely clutches the stolen documents as he gloats over his success. 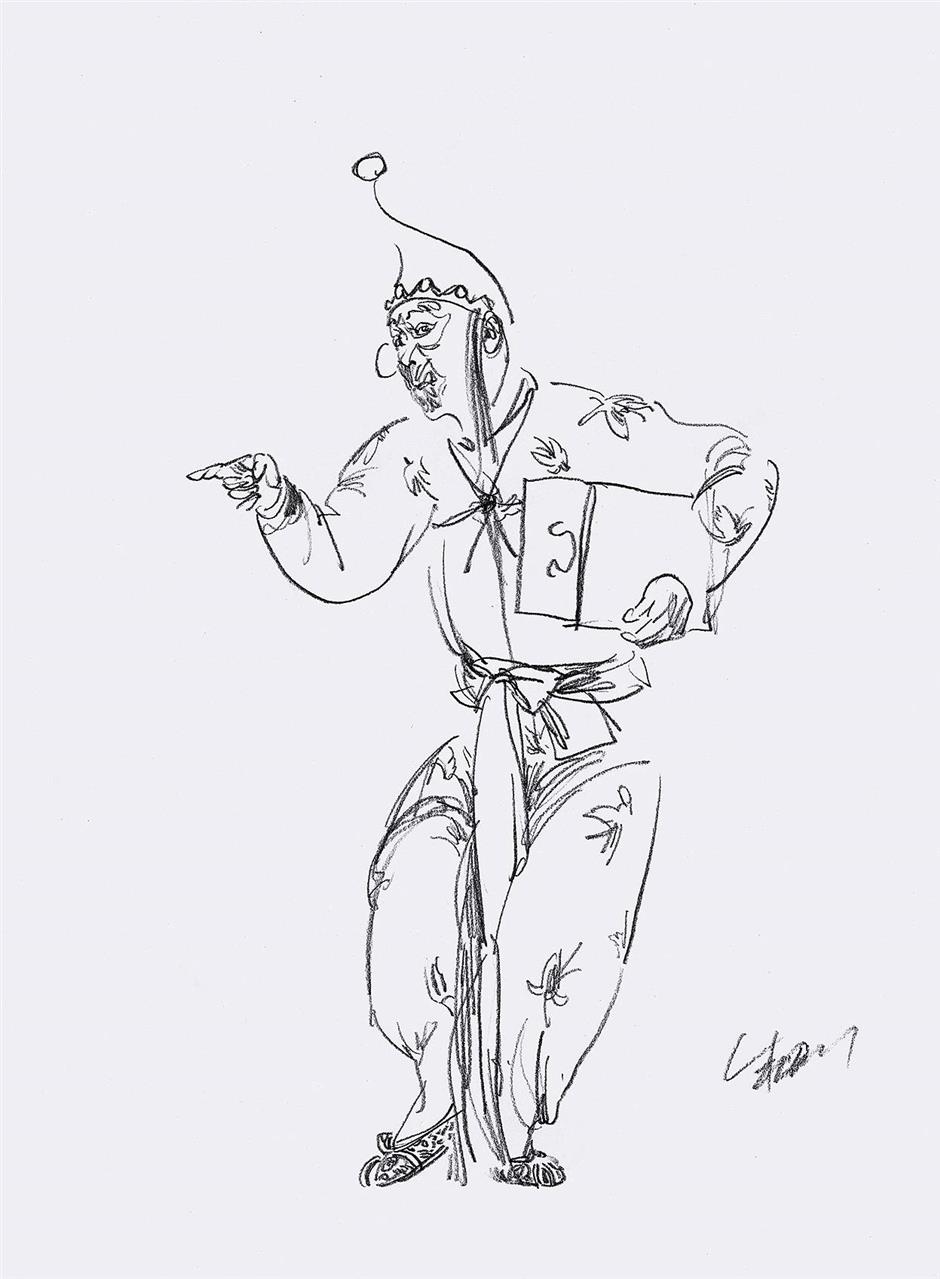 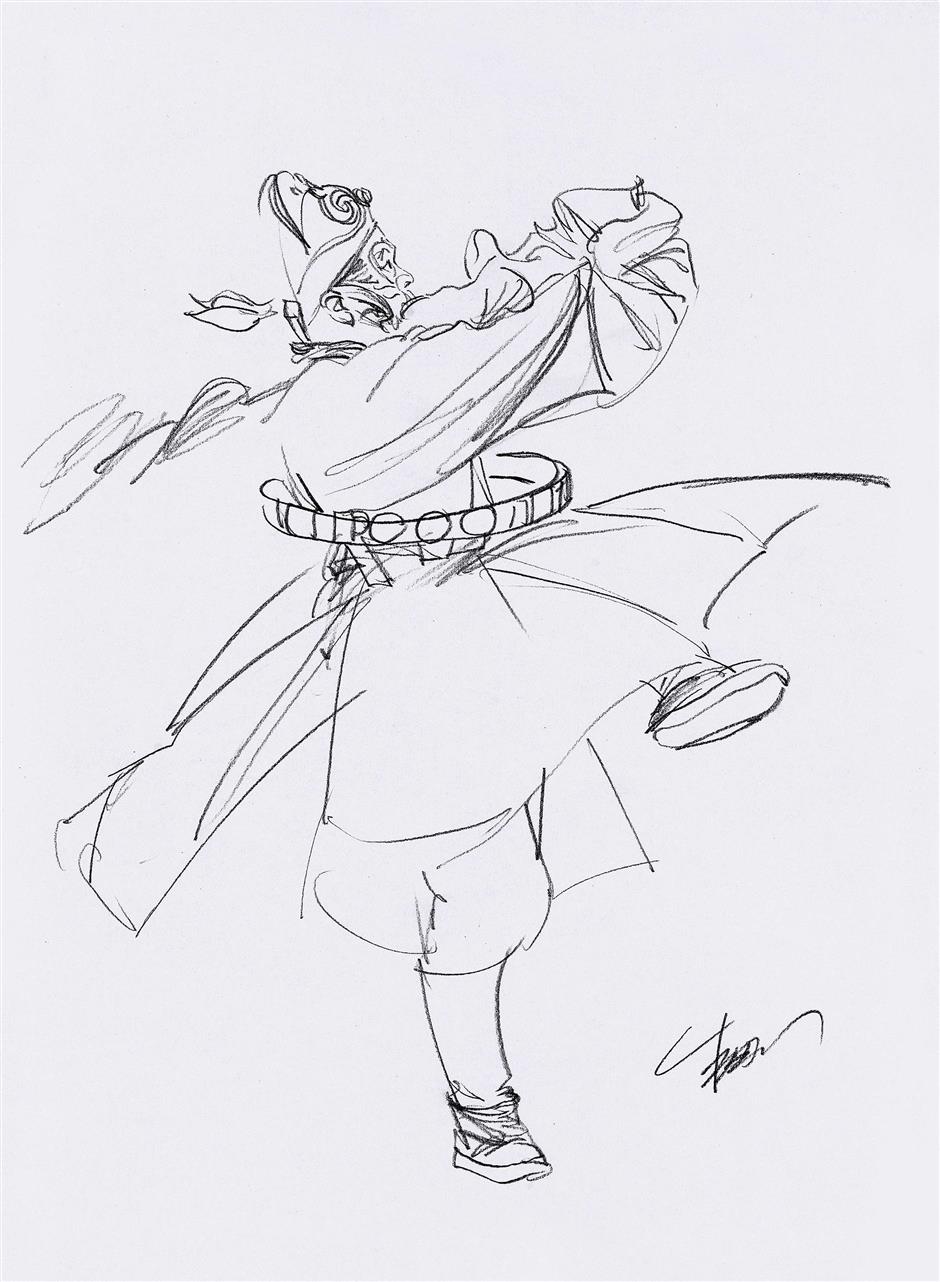