Masterpiece of carvings hidden in a forest reveals ancients skills 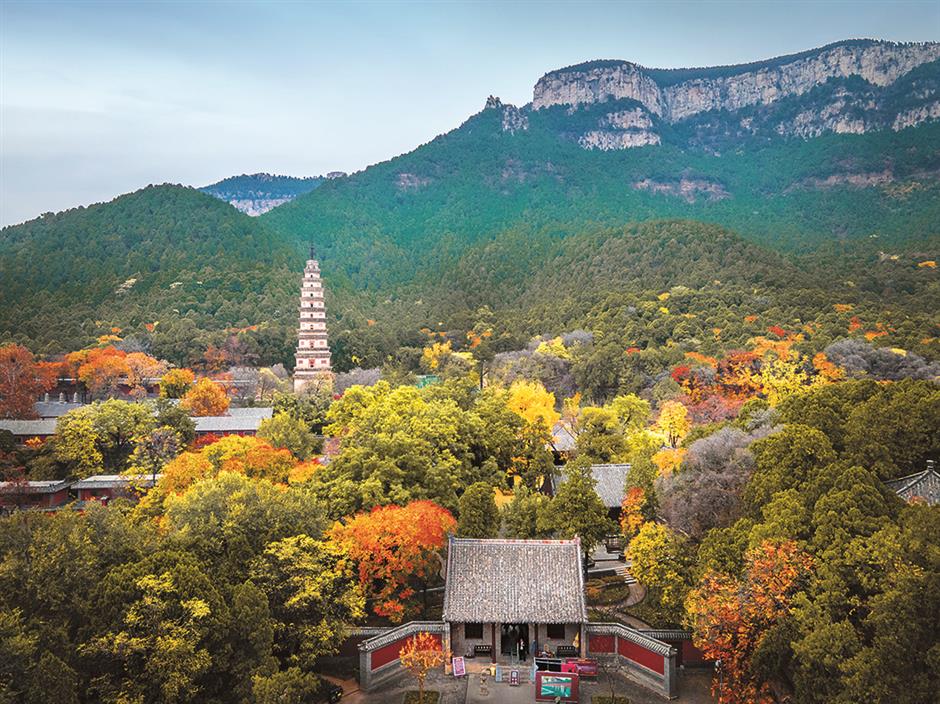 The Lingyan Temple in Shandong Province is a magnificent Buddhist shrine, emperors' royal residence and an architectural masterpiece that showcases the best of Chinese carving skills.

Hidden in the deepest forest at the northern foot of Taishan Mountain in Shandong Province, the Lingyan Temple is a magnificent Buddhist shrine, emperors' royal residence and an architectural masterpiece that showcases the best of Chinese carving skills.

With a history of more than 1,600 years, the temple was built in the Eastern Jin Dynasty (AD 317-420) by the monk Senglang. After expansions and renovations over several dynasties, it reached its heyday in the Qing Dynasty (1644-1911) with almost 50 halls, 18 pavilions and more than 500 monks.

The landmark Pizhi Tower, an octagonal brick-laid construction of nine floors, was rebuilt in AD 994 and only opened in 1057. The surface of the tower base is carved with the story of the Indian Maurya King Ashoka (303-232 BC), who promoted Buddhism throughout his empire.

The Hall of Thousand Buddhas, as the name suggests, features varied Buddhas, arhats – those who have gained insight into the true nature of existence and have achieved nirvana – and heavenly kings. Three Buddhas in bronze sit solemnly in the center in an air of quiet authority.

Unlike the usual carving way to deify arhats, these statues were carved in a very worldly, realistic approach to bring out every arhat's inner quality.

Some sit, sleep or squat, while some smile, stare or speak. Some are dressed gorgeously, and some are in ragged clothes. The body proportions are handled precisely, and the clothes' textures are vividly engraved to show different gestures and movements.

The statues were all made in ordinary yellow clay. Sculptors first set up the wooden skeletons and enriched the flesh with straws and reeds. Clay was applied and dried. Colors were brushed, dotted, and outlined. Glass balls were embedded as eyeballs in the final step.

These sculptures show ancient Chinese had mastered human anatomy. In a hall renovation project in 1982, experts found there was an abdominal cavity in each arhat, and the internal organs were made of silk.

In addition, ancient coins and bronze mirrors were discovered.

The graveyard for the temple's abbots and master monks is also an open-air museum of stone carving. The tombstones were sculpted in different shapes with various techniques. Some were engraved into a warrior, bearing a great load on his bending back, with bulging muscles and exaggerated facial expressions.

Some were carved into a knight riding on a lion to play polo, while some were engraved to be a dancer in silky long robe. Each showcases the ancient craftsmen's rich imagination and skill.

The temple is famed for its springs. The Ganquan Spring in the north flows from the cliff. The monks often get the water to boil tea, and read sutras when the night falls.

The Feiquan Spring in the south was praised by Emperor Qianlong (1711-1799) during one of his eight stays at the temple. At dusk when the sunset tints the sky red, the spring's water drops are dazzling with beautiful colors.

Amazed by the scenery, the emperor even wrote several poems for the spring.

The Three Springs in Five Steps has a beautiful centuries-old legend in AD 520. Monk Fading traveled to the temple, which was almost destroyed in an anti-Buddhism movement. Lost in the mountain, he sat and meditated for 49 days, which moved the God of Sun.

The god shed light through forest to guide the way for him, and two red-crowned cranes flew by to show the thirsty monk two springs. Fading was saved. When he struggled to stand up with his walking stick, a third spring appeared. As the waters were so close, they earned the name "Three Springs in Five Steps."

Today, the Lingyan Temple has become a major Buddhist shrine. On the first day of the Chinese New Year, pious followers gather at the temple to recite sutras, burn incense and pray for blessings.