Artist Cai Guoqiang is known for his paintings with gunpowder. – Charlie He

Stretching in front of the Huangpu River, the newly opened Museum of Art Pudong (MAP) is destined to be the hottest art venue this summer.

The site directly faces the spectacular river scene with Oriental Pearl Tower as its backdrop, making the building itself a work of art.

Like a marble-and-glass rectangle from the front, MAP is actually the latest work of renowned French architect and Pritzker Prize winner Jean Nouvel.

According to Nouvel, the design of MAP is meant to "blur the distinction between the structure and the environment."

Apart from the design of a world-famous architect, the three inaugural exhibitions at MAP manifest its ambition to be one of the top international art museums.

Chinese fireworks artist Cai Guoqiang's "Odyssey and Homecoming" is in line with the other two exhibitions on loan from the United Kingdom's Tate Museum and Spain's Fundació Joan Miró.

In 2010, "Cai Guoqiang: Farmer Da Vinci," was also the opening exhibition at the Rockbund Art Museum. The exhibition reflected Cai's artistic thoughts about the interaction between humans and nature, with a focus on the creativity of Chinese farmers.

From then on, he is considered one of the best Chinese contemporary artists on the international stage. He "explodes" around the world with his explosive talent.

A huge map on the museum's wall marks Cai's 538 implemented projects plus 101 projects haven't been realized.

"Those failed projects are actually my dream lovers," Cai joked.

So far, Cai's art projects have covered 218 cities in nearly 50 countries around the world.

The highlight of Cai's exhibition is the site-specific, kinetic light installation titled "Encounter with the Unknown" for the unconventional X Hall at MAP.

The work, inspired by the cosmology of the Mayan civilization, weaves together images from stories and myths of humans who "defied gravity" and "embraced the cosmos," forming a tapestry of cosmologies from different civilizations.

The installation's main structure, "Cosmic Tree," stands roughly 30 meters tall in the center of the space, symbolizing the interconnection of all things.

"The work aims to capture the human longing for the cosmos that has prevailed since ancient times. It also seeks to convey our renewed curiosity and yearning for unknown worlds at this moment in time when our future seems more uncertain than ever," Cai said.

When unlit, the structure resembles an artist's laboratory: handcrafted set pieces are mounted on wooden frames of various sizes and shapes; crisscrossing ropes hold the pieces in place; and dozens of motorized devices whir as each of them moves differently according to its own design.

But when turned on, the computer-controlled LED lights reveal the full complexity of the layered motifs. The chaos and multidimensionality it creates closely complements the "four dimensional space-time" design concept proposed by the museum's architect Nouvel.

"I watched the museum progress remotely, everything I see absolutely fits with the scale and spirit of the venue. Cai is telling us his stories with so much humors and has filled them with light. One of the characteristics of great artists is whether they are still capable of generating certain energy albeit in a difficult space," commented Nouvel.

"Encountering with the Unknown" is a return to the original dreams of the boy who gazed up at the Milky Way. As a child, small Cai often looked into the stars and imagined what lies beyond the night sky.

Born in 1957 in Quanzhou, Fujian Province, Cai studied stage design at the Shanghai Theater Academy. While living in Japan from 1986 to 1995, he explored the properties of gunpowder in his drawings, which eventually led to his experimentation with explosives on a massive scale and to the development of his signature explosion events.

He shot to fame as director of visual and special effects for the opening and closing ceremonies' fireworks displays at the Beijing Olympic Games in 2008.

The exhibition also showcases 10 documentary videos directed by Xia Shanshan featuring several major art museums worldwide, and the classic works and artists from various chapters of art history with whom Cai has interfaced.

Meanwhile, Cai's "A Material Odyssey," an exhibition within the exhibition curated by the Getty Conservation Institute in Los Angeles, is on view on the fourth floor.

The work highlights the concept of painting itself and the aesthetic tension of materials and production methodology. Mounted in rapid succession, the large-scale paintings, again, exude the monumental impact that matches the spatial concept of the architecture. 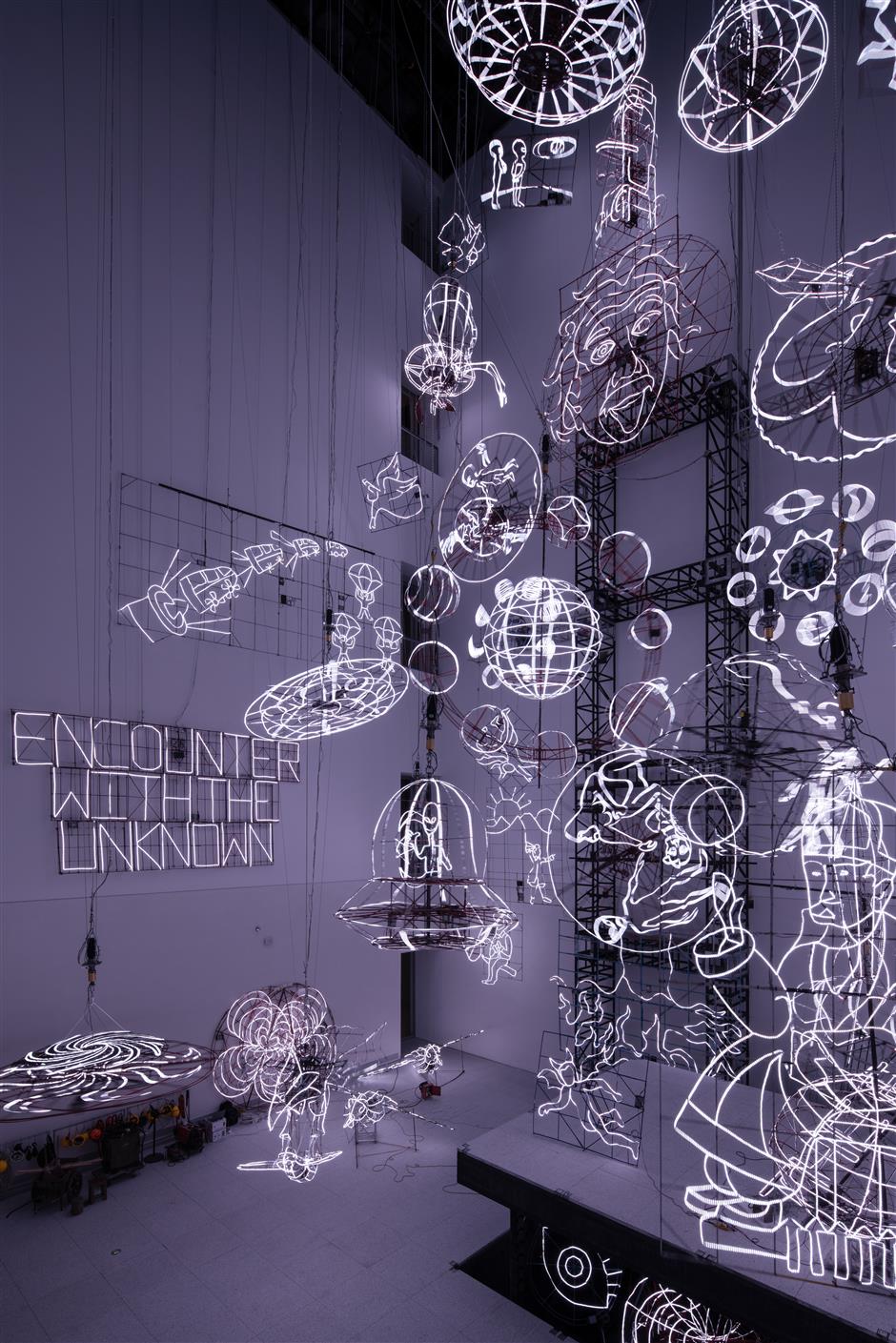