Influence of masters not lost in woodcut art

Woodblock printing originated in China some 1,200 years ago. Diamond Sutra, the world's earliest woodblock printed work made in China in AD 868, is believed to have been a breakthrough in mankind's printing and communication history.

Thereafter, monochromatic woodblock printing gradually transferred those skills to copy and print paintings and books, which later evolved into an important art genre in ancient China.

During the 1930s, Lu Xun, a leading figure in modern Chinese literature, urged artists to use powerful woodcut print posters to inspire patriotism and fighting spirit.

The Muling Woodcut Society, which was then established in Hangzhou under Lu's guidance and instruction, gathered a number of patriotic artists and published paintings to stir the public's conscience.

The society is still going strong today and has evolved into a part of the China Academy of Art. An exhibition showing society members' woodcuts is underway in Zhejiang Museum through October 7. Visitors can see how artists hand down the influence and spirit from generation to generation through the exhibits on display. 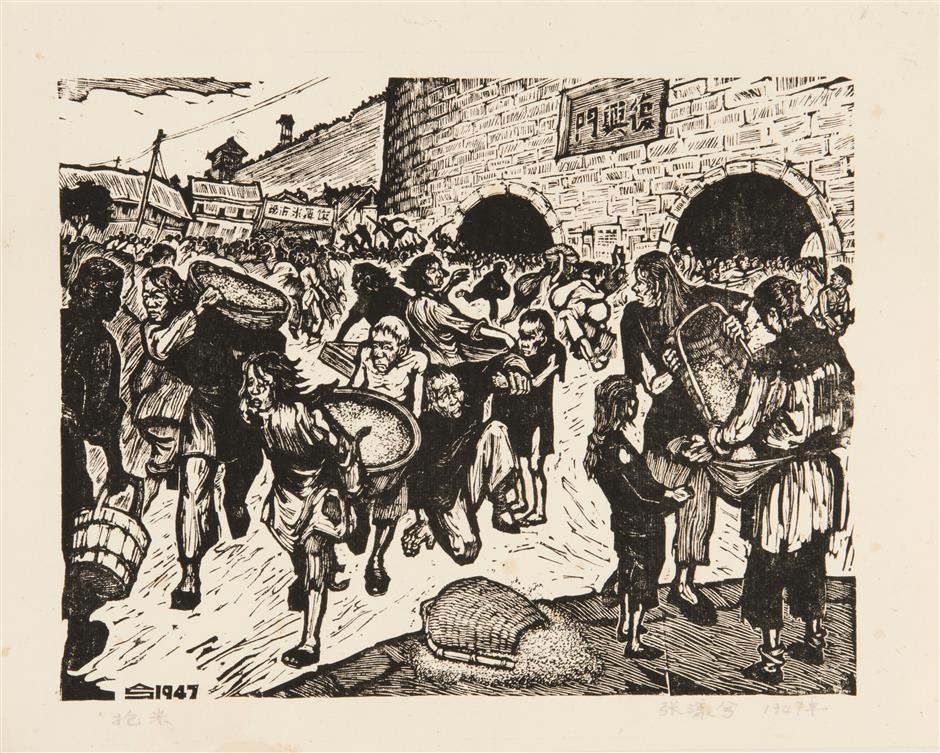 Though the popularity of woodcuts gradually waned through the dynasties, there were still artists who continued to work in this time-honored medium. When China was torn by war and civil conflicts, artists used wood chisels, brushes and pens to create works that inspired people to fight against invasion and enemies.

Woodcut master Zhang Yangxi (1912-1964), one of the most famous of these artists, produced hundreds of prints and other works during the War of Resistance against Japanese Aggression (1931-1945).

His experimental works explored new forms of woodcut art. They aroused sympathy for victims and the underprivileged, motivated people to resist and praised farmers, working people and showcased the progress achieved by the People's Republic of China.

His artistic style was developed along with his personal life experience. Zhang was born in Chengdu, capital of Sichuan Province, and lost both parents when he was 7 years old. In 1927, with financial assistance from an elder brother, he enrolled in the Sichuan Art Academy, majoring in woodcut art. 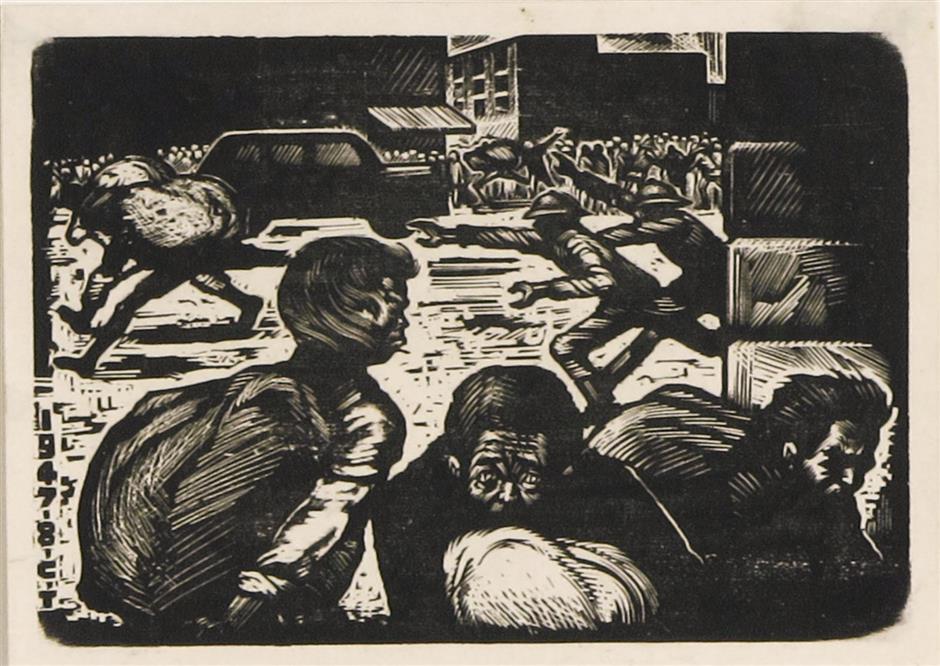 In 1930, a student strike created a storm in Chengdu, which was cruelly suppressed by a local warlord. Zhang created posters extolling the realistic and progressive outlook of the student rebels, an uncommon take on protest at the time.

Zhang threw himself into the movement, discarding his earlier subjects such as scenery and beauties. Instead, he turned to political subjects, the national crisis and the suffering of the people, as the exhibits showcase.

He integrated the style of the pictorial clay tablets of the Han Dynasty (202 BC-AD 220) with the style of the Zhejiang school of woodcut, using plain, strong lines to depict the environment and facial expressions. 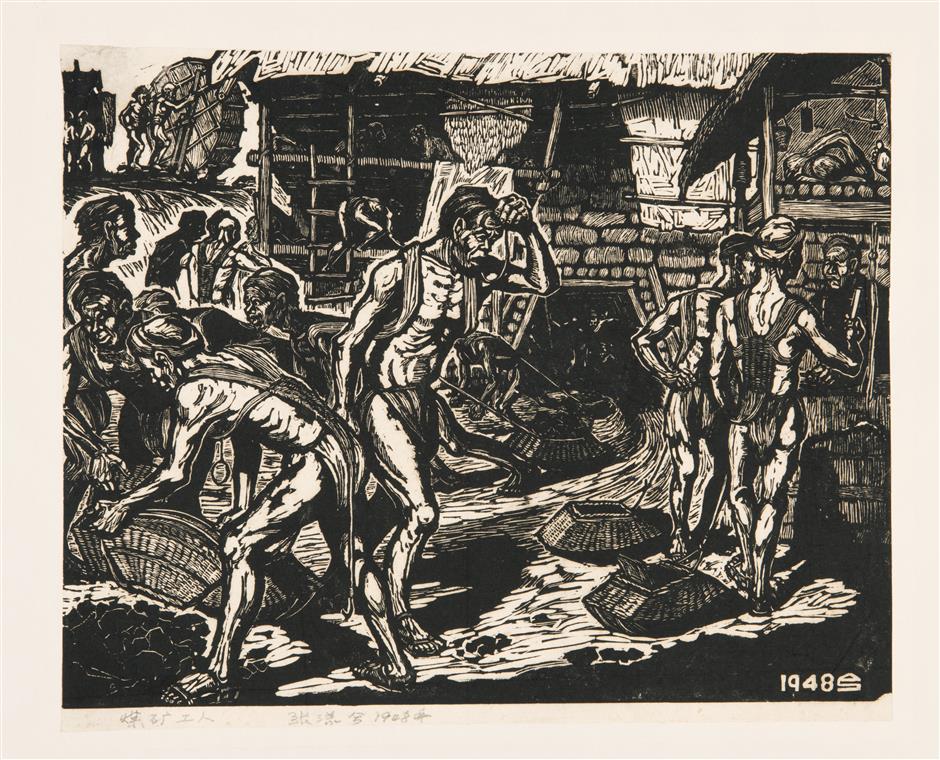 The dividing line in Zhang's life was 1949. Before that, he traveled and devoted himself to the national salvation movement. In 1956, with the help of the central government, he established the woodcut department of the China Academy of Art in Hangzhou. This is considered his greatest contribution to modern-day Chinese art.

The CAA was established 93 years ago, and its development history overlaps the national army's history. Artists used woodcuts to showcase the army's brave fighting during the War of Resistance against Japanese Aggression.

Zhang Huaijiang (1922-1990), another famous artist, produced hundreds of prints and other works themed on the anti-Japanese war.

He was considered a leader of China's second generation of woodcut artists and an influential educator. His work closely reflected the times. A native of Zhejiang Province was greatly influenced by the Yan'an woodcut school that is characterized by revolutionary works, which could be reflected through the exhibited works. 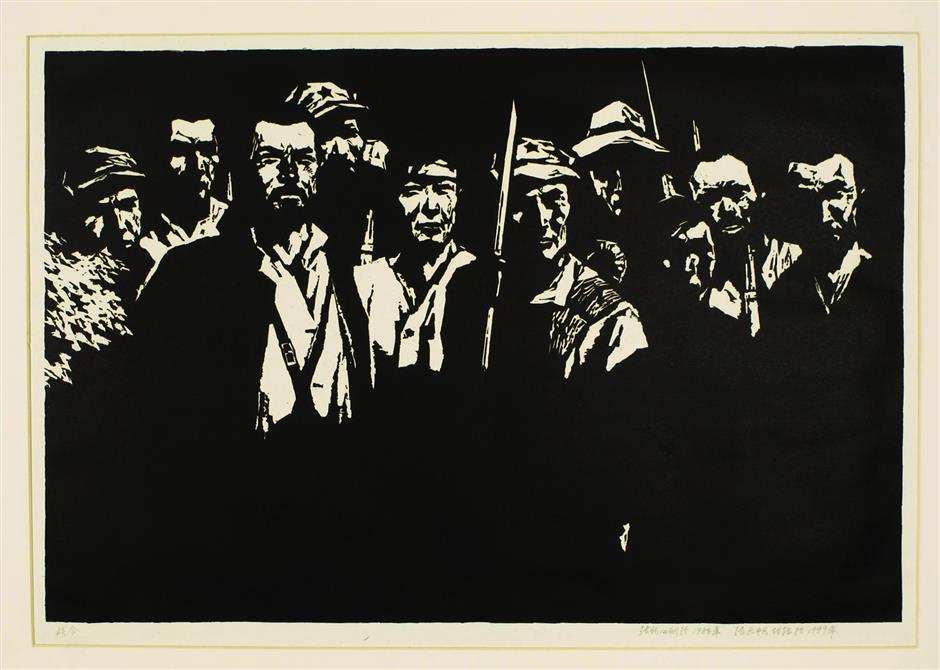 A piece of woodcut artwork by Zhang Huaijiang.

Zhang later taught at the CAA. He developed a unique way of cutting, integrating former Soviet Union and traditional woodcut techniques. Many of Zhang's works were inspired by literary figure Lu Xun. Zhang, himself, wrote an article "Lu Xun Teaches Me How to Hold a Pen."

Today, woodcut is one of the main departments in the CAA. Students have inherited their predecessors' plain, strong lines to depict the environment and facial expressions. However, themes are switched to modern life and abstraction as social conditions change.