The secrets of the grandmaster of wisteria

Wang Lin traveled 68 times to Chongming Island where the 10th China Flower Expo was held from May 21 to July 2.

The awards recognized his Wisteria Corridor, one of the highlights of the flower expo, and his efforts to promote the plantation of wisteria nationwide.

From the 600-day countdown to the expo, he was busy with picking the source plants, renovating the soil, designing the pergola, matching varieties in different colors and planting 345 vines on the 2,053-meter-long pergola.

His efforts became a wanghong (Internet celebrity) spot for visitors to take photos during the flower expo. 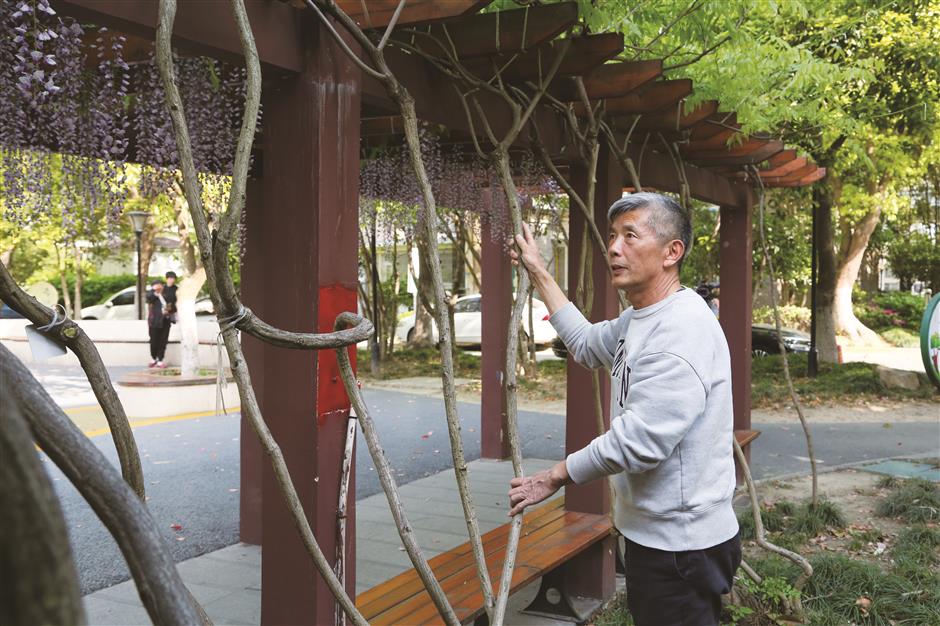 Wang Lin picks and arranges the vines of wisteria flowers to surprise visitors of this purple waterfall during the 10th China Flower Expo. The wisteria corridor was a must-go spot for visitors to take photos during the event.

Sixty-three-year-old Wang was delighted to see the scene.

Wang was born and raised in Jiading Town. He was sent by the Chinese government to learn agricultural technology in Japan in 1985.

After returning, he worked in a Japanese company for several years and speaks fluent Japanese.

His language skill impressed the Jiading government, so when Fujimoto Michio, a renowned horticulturist and the founder of today's Wisteria Park, visited Jiading, Wang was assigned as his translator.

In fact, Wang, himself, was fond of wisteria, and his older brother was the manager of the Wisteria Park which was built through the efforts of Fujimoto and Jiading in 1996.

Every year when Fujimoto flew from Japan to prune the wisteria in Jiading, Wang rushed to the park to see how Fujimoto is devoting himself, still climbing the ladder to prune the flower at such a ripe age.

In 2011, he decided, more or less on a whim, to grow wisteria in his daughter's garden to celebrate her newly-purchased house.

After hearing the news, Fujimoto sent three vines to him, and that was when Wang started to think that if there were a local wisteria base and professional gardeners in Jiading, things would be easier.

So Wang made up his mind to study how to grow and treat wisteria. He paid several visits to Fujimoto's home in Japan and gained his respect.

Fujimoto not only sent more than 10 scions of wisteria, but also gave his guidance for grafting.

Three years later, Wang decided to take over the responsibility of promoting wisteria flowers on his own after then 82-year-old Fujimoto asked: "How many years do you think I can still climb the ladder?"

"I will try my best to make wisteria root in China," Wang promised.

In his spare time, Wang took Fujimoto to Guangzhou and Hong Kong, not only for investigation but also for traveling, and Fujimoto also took Wang as his family member.

To fullfill his promise to Fujimoto, Wang not only built his own company engaged in rattan gardening, but also gained a land of 10 mu (6,667 square meters) as the base to grow and experiment in Huating Town. 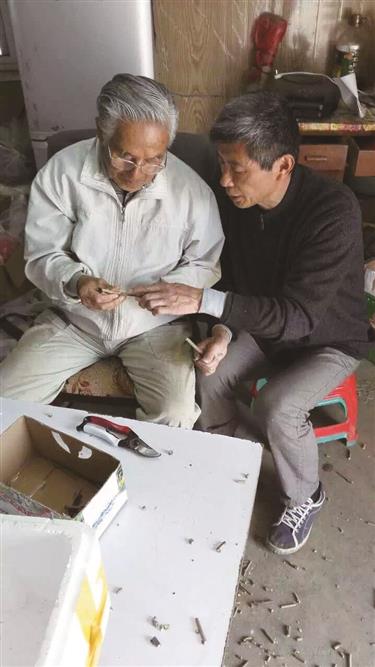 "The wisteria flower I grew shouldn't be simply called 'wisteria' but 'long-spike' wisteria," said Wang. "The longest spike can reach around 150 centimeters with a great density of spikes. More than 100 spikes can be grown in every square meter, tier upon tier, which is marvelous."

"Now, a 180-centimeter spike has been cultivated, even longer than the height of a man!" Wang added.

"We found that the seedlings of 1-centimeter-wide stem died easily because of the frozen weather, but if they reached 3 centimeters wide, the rate of survival would be greatly raised," said Wang with joy.

When embellishing the wisteria in the flower expo, he also took the flower's peak time into account. For example, long-spike wisteria blooms later than domestic ones, so the timing is vital.

In recent years, Wang's footprint has reached most of the places in China in order to let long-spike wisteria root, grow and reproduce.

But busy work resulted in Wang neglecting his family sometimes.

When he took over the responsibility of growing the long-spike wisteria corridor for the flower expo, his wife was diagnosed with a severe disease and had an operation.

But Wang chose to stay in Chongming instead of going home to take care of his wife, which made his wife angry.

Fortunately, his wife finally recovered and also visited the flower expo together with Wang.

After seeing the fabulous wisteria corridor, she was relieved and said she was so proud of her husband.

During his days of promoting long-spike wisteria, Wang cried twice.

"The first time was in December 2019, not long before the outbreak of novel coronavirus. I took train to Beijing and arrived at 2:30am. It was freezing, and I was alone," he said. "And the second time was in April at the Shanghai International Flower Show when I was awarded the gold prize for the wisteria. These were tears of excitement and tears of joy!"

And more wisteria corridors are popping up in parks throughout the country.

Wang dreams that long-spiked wisteria can spread across the country.

"I need to keep on running and working and devoting all my energy and intelligence to make a contribution to wisteria promotion," he said.