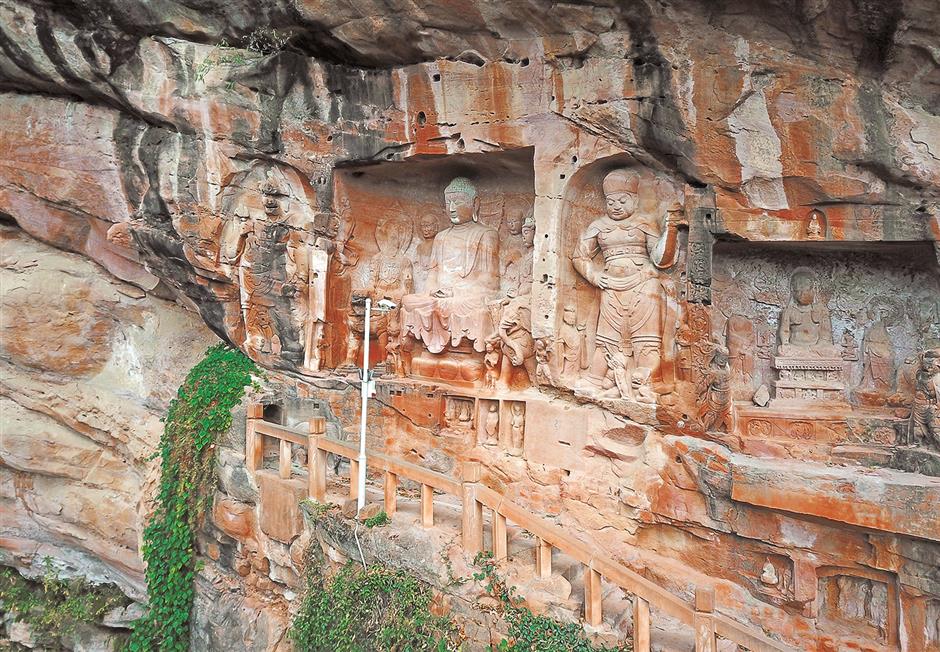 Hidden in the deep forest on the Huashi Mountain surrounded by Zhuxi Lake in the city of Qionglai, Sichuan Province, Huazhi Temple earns its reputation from its beautiful Buddhist grottoes that date back more than 1,200 years.

Hidden in the deep forest on the Huashi Mountain surrounded by Zhuxi Lake in the city of Qionglai, Sichuan Province, Huazhi Temple earns its reputation from its beautiful Buddhist grottoes that date back more than 1,200 years.

Comprising 10 caves and niches with 2,019 statues, the grottoes represent the best of Buddhist cave art in China, a truly classic masterpiece that took place during an early peak of Chinese art.

Featuring a strict unity of layout and design, the statues were created in the Tang Dynasty (AD 618-907), a time when the prominence the national Buddhist belief was vividly illustrated through the stone carvings.

The first cave houses the 4.7-meter-tall Buddha of Immeasurable Life, featuring a full and round face of solemn and benevolent aspect, while his robe's ribbons have a thin texture as if they are fluttering in air. This Buddha was color painted in 1893. It was authenticated in the 1980s by the Chinese Ministry of Culture as a rare and precious statue, and is under national protection.

The second cave, 2.5 meters wide and 1 meter deep, is the shrine for the Buddha of a Thousand Eyes and Hands, which has been badly damaged. The guard Pishamen Heavenly King – whose head and hands have been weathered away, but the fire-pattern screen at the back of the head can still be seen – stands beside the Buddha.

The king is in armor with a weapon around his waist and is stepping onto three ghosts, who are down on one knee and holding up the king's feet in respect.

The third cave, 2.3 meters tall, 2 meters wide and 0.85 meters deep, houses three big Buddhas and 53 small ones in rows behind a wall. The main Buddha, whose face is destroyed, sits in the middle with two others standing on each side on a platform engraved with three vases full of lotus leafs.

The Thousand Buddha Cave is the most magnificent of them all, made up of 1,745 small Buddha statues in 21 rows. Clean cut in smooth lines, each Buddha sits on a lotus seat with a solemn look on its face.

Upon close inspection, it seems they reflect two different aesthetic standards – one from the Northern Wei Dynasty (AD 386-534) that featured long and thin figures, the other from the Tang Dynasty that advocated roundness and plumpness.

On the top of this cave, three old paintings depict the Chinese classic "Journey to the West," a legend overflowing with magic, demons, gods, immortals and Monk Xuanzang's odyssey to ancient India for the Buddhist sutra.

Because it's situated in the center of Zhuxi Lake, visitors must take a boat to the temple's island and trek a bit to Huashi Mountain to get to the grottoes. According to the stone stele in Huazhi Temple, the statues were carved in AD 798 by the monk Ma Cai, but there's no exact record of how long it took to complete them.

Ma once studied and preached Buddhism at Zhangjing Temple in the city of Chang'an (today's Xi'an, Shaanxi Province). In AD 798, the emperor instructed him to establish a new temple in Sichuan Province and carve grottoes to promote the religion.

The temple got its name "Huazhi" (to place the flower) from a Buddha Sakyamuni anecdote, who was said to place a golden sandalwood flower at the temple to practice Zen.

Building the temple in Qionglai, a remote city that connects the Tibet Plateau, was due to cultural and economic concerns.

As a meeting place on the ancient Tea Horse Road that linked Sichuan and Yunnan provinces and the Tibet Autonomous Region, Qionglai was also a trading center and melting pot of different cultures. As such, the temple had far-reaching influence promoting Buddhism in southwest China.

Sichuan has many other Buddhist caves from the Tang Dynasty, including Anyue Grottoes in the center of the province and Thousand Buddha Cliff in Guangyuan that borders Gansu and Shaanxi Provinces in the north.