Few people can resist the art created by Joan Miró (1893-1983), the Spanish painter, sculptor and ceramist. Probably one of the greatest artists of the 20th century, Miró conjured up a surreal world filled with color and joy.

"Joan Miró: Women, Birds, Stars" at the Museum of Art Pudong is the first Miró exhibit in China and the most important showing of his work in Asia since 2014. It runs through November 7.

Curated by Jordi Joan Clavero, head of public programming and education at Fundació Joan Miró (Joan Miró Foundation), the exhibition includes 69 of Miro's paintings, sculptures, drawings and prints on loan from the foundation's permanent collection and two private collections, as well as a series of photographs by Joaquim Gomis and video material.

Located in Barcelona, Fundació Joan Miró is a center for the study and dissemination of Miró's work and contemporary art. It was created by Miró and opened to the public in 1975.

At the exhibition, visitors can discover Miró's imagination and unique language of signs, as well as the way he experimented with a variety of techniques and materials.

Miró was born into a family of a goldsmith and watchmaker in Barcelona. In 1907, his parents sent him to an art school in Barcelona. However, the teenager only left his teacher an impression of "rare foolishness." So he quit the school in 1910 and worked as a business clerk in order to share his parents' financial burden. However, depression and the heavy workload contributed to a physical and mental breakdown the next year, so his father took him to the Mont-roig del Camp countryside to recuperate. It was during that period that he looked over the golden sand beach, coarse rocks, surrounding vineyards and olive trees every day, which inspired his art style.

For any ambitious young artist, Paris was undoubtedly of great appeal.

In 1919, Miró left his hometown and went to Paris, home to a thriving art scene. However, as a young unknown artist, life was a day-to-day struggle. Luckily, he made friends in the art community, including Pablo Picasso, who bought one of Miró's paintings. Shortly after his surrealist exhibition in 1925, his paintings became widely recognized as "dreamy works." 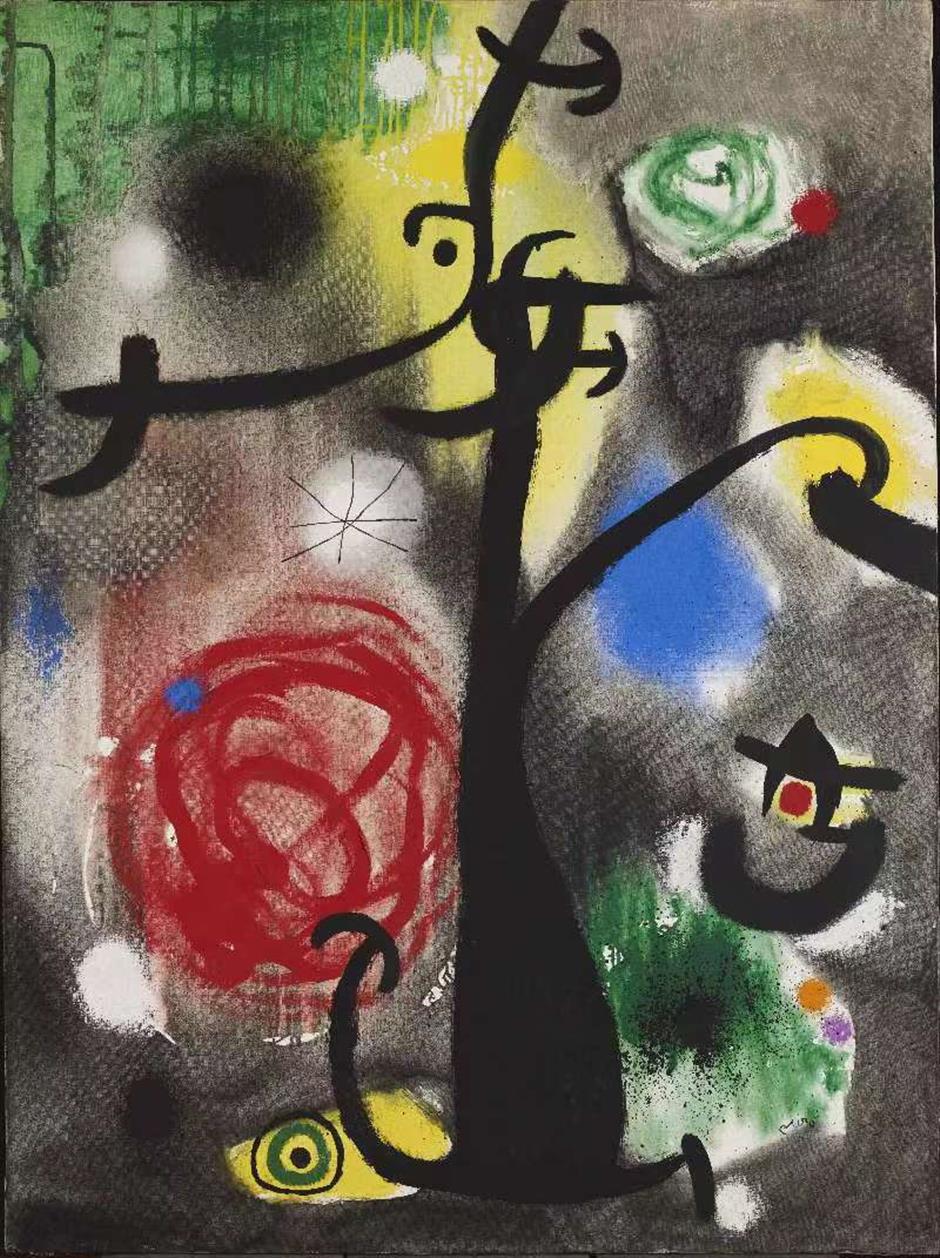 The exhibition at the Museum of Art Pudong is divided into an introduction and four sections. The first section, "A Vocabulary of Signs," introduces visitors to the artist's vocabulary through his prints, and reveals the more poetic concepts he developed throughout his career: sky, stars, birds and women.

The second section, "The Sign in Freedom," shows the artist's technical experimentation with a variety of materials, and his use of signs in a more open way – enabling them to transform and reinvent themselves, even to the point of dematerializing.

The third section, "The Object," focuses on sculpture, ceramics and textiles as objects. For Miró, objects were the equivalent of signs in painting, where the real becomes symbolic.

The final section, "Black Figures," includes paintings, etchings and lithographs. One of Miró's distinguishing features was his never-ending curiosity, which led him to experiment with a wide variety of materials and techniques, such as drawing, painting and printmaking.

The depth of meaning in Miró's work came from a desire to capture the essence of human existence. Such desire implied an affirmation of the identity that arose from his strong connection to the land and the medieval town of Mont-roig del Camp in the Catalan countryside, which was the original source of his creativity.

As the years passed, Miró defined his own style, systematically reducing his colors to an elementary range and consolidating a formal vocabulary composed of a clearly defined group of figures – women, birds, the moon, sun and constellations, and the ladder of escape. He also embraced motifs that refer to more general concepts – the land and sky, the connection between them and the search for an ideal harmony. 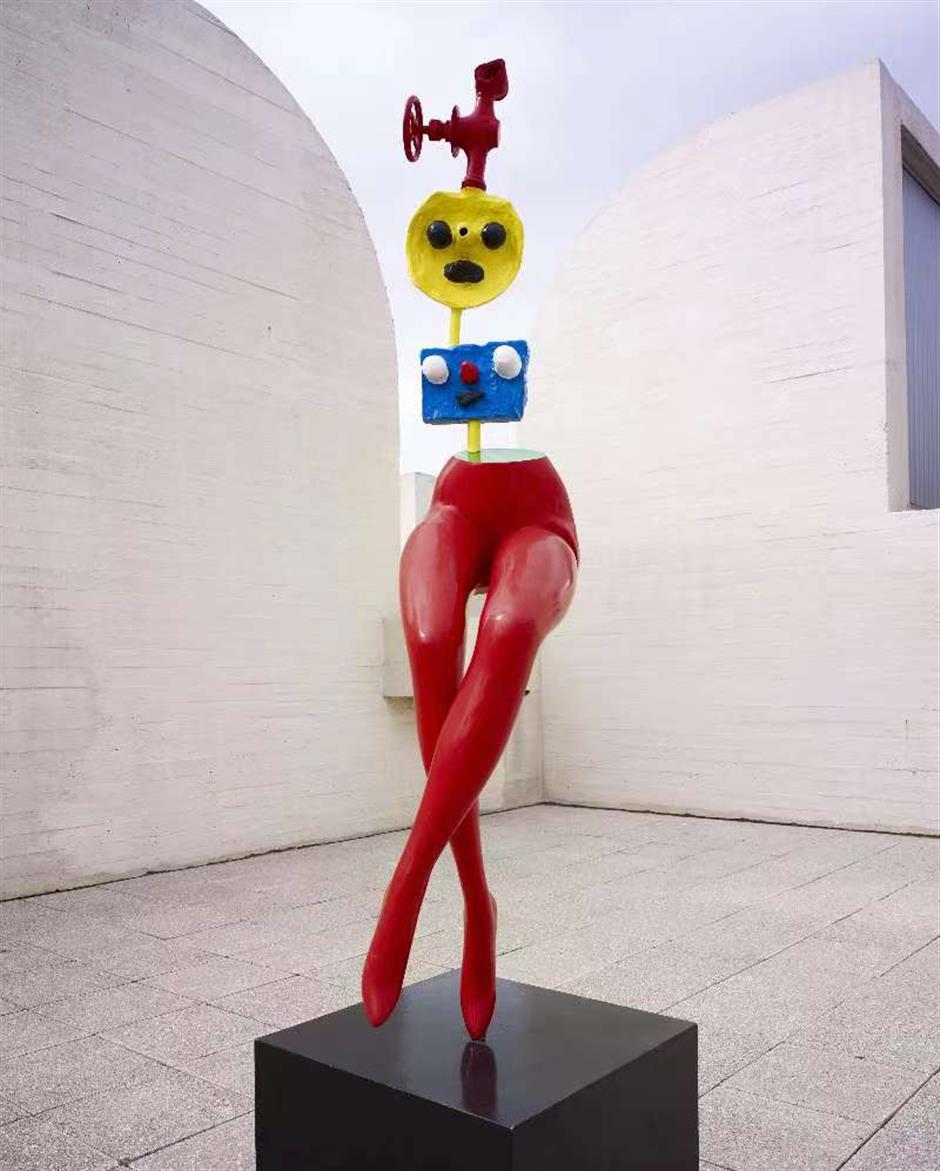