Ancient craftsmen in Zhejiang Province integrated the techniques of China's different varieties of ceramics to develop multiple shades of green glaze and named them "celadon." From then on, Zhejiang has become the center of celadon art and has produced a large number of renowned artworks throughout history.

Craftspeople adjusted clay composition and glazing techniques to invent whitish, bluish, yellowish and pinkish-green varieties. Their elegant shapes and jade-like texture are the hallmark of the celadon technique.

Now, an exhibition at the Zhejiang Museum's Wulin Pavilion displays ancient celadon artwork along with modern porcelain, presenting the passing-down of traditional crafts and providing young artists with a platform to show their ingenuity.

A group of top-notch craftspeople have emerged from Zhejiang. They handed down the intangible cultural heritage to their offspring and apprentices, which in return keep the art thriving.

Most ancient exhibits were made during the Song Dynasty (960-1279). The royal court gave the priority to the humanities, turning to people's inner emotions and a minimalist art style which were evident in many pieces of pottery on display.

Muted shades and quiet simplicity are the main features of ceramics made during that period. Ancient artists formed several classic designs, which persisted in art nationwide for centuries. Today, some of these are still the most common celadon types.

Feng'erping (凤耳瓶) is emblematic of celadon art. It is a type of container with phoenix or fish-shaped handles and can be used during religious ceremonies to show the nobility of the deceased.

Feng'erping made during the Song Dynasty was considered the best ever produced. At the time, productivity and kiln numbers were at their peak time when the capital moved to present-day Hangzhou. Both ancient and modern feng'erping are on display at the exhibition. 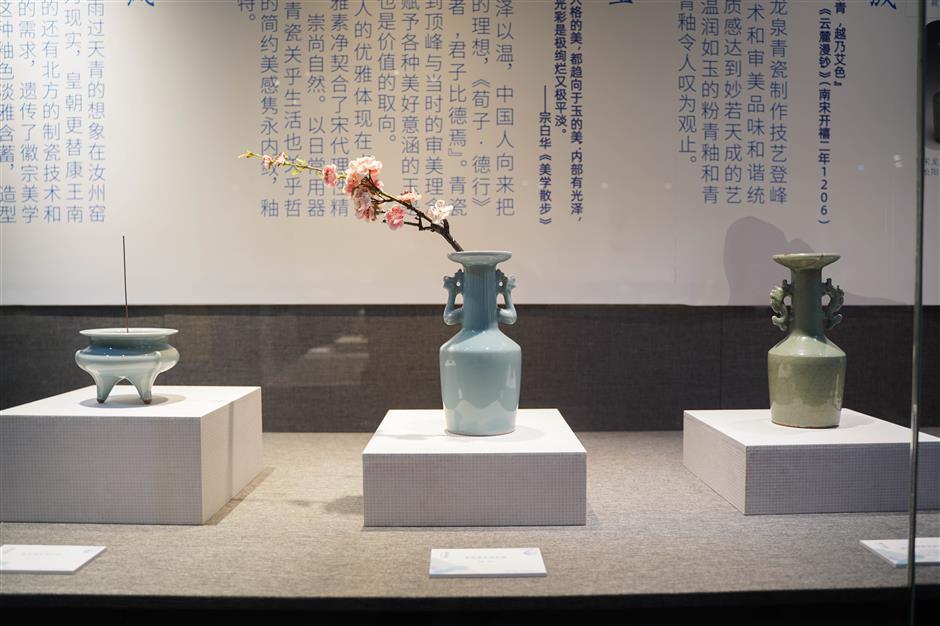 Showcased is a feng'erping, a type of container with phoenix or fish-shaped handles and can be used during religious ceremonies to show the nobility of the deceased.

Another popular design is meiping (梅瓶), tall with a narrow base spreading gracefully into a wide body followed by a sharply round shoulder, a short and narrow neck and a small opening.

It is often used to display branches of plum blossoms, small pines and bamboo that reflects the ancient Song people's integration of aesthetics and practicality. The exhibition shows ancient and modern meiping together, indicating the lingering charm of the design.

During that period, craftspeople fired daily-used vessels and containers for flowers, because scholars and literati practiced flower arranging and bonsai planting. Today, people still use meiping rather than modern-style vessels to arrange peony, chrysanthemum, orchid, plum blossom and wintersweet flowers. 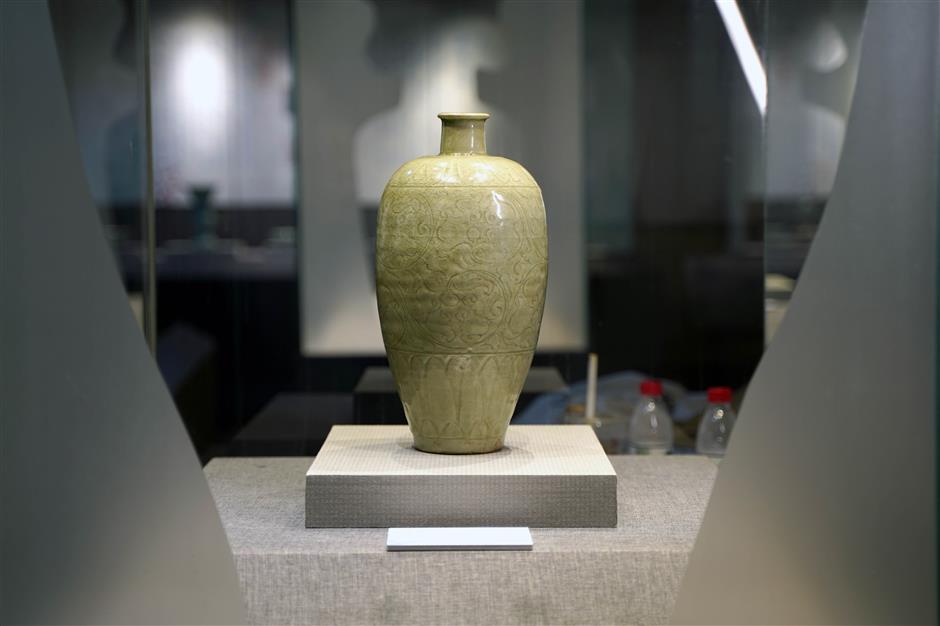 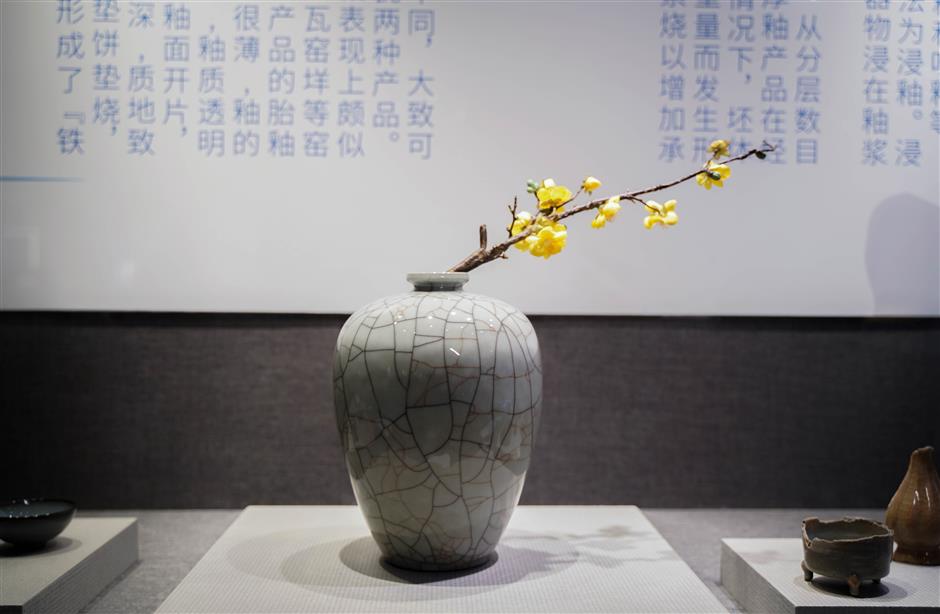 The exhibition shows ancient (above) and modern meiping together, indicating the lingering charm of the design.

Dajiping (大吉瓶) is also the epitome of classic celadon designs. It is characterized by the shape of calabash, similar to the Chinese character "ji" (吉) which literally means "lucky."

Calabash is called hulu (葫芦) in Chinese, sounding like fulu (福禄) with the meaning of fortune and happiness. In ancient China, calabash-shaped porcelain is often used to decorate living rooms, with an expectation for a bright future. 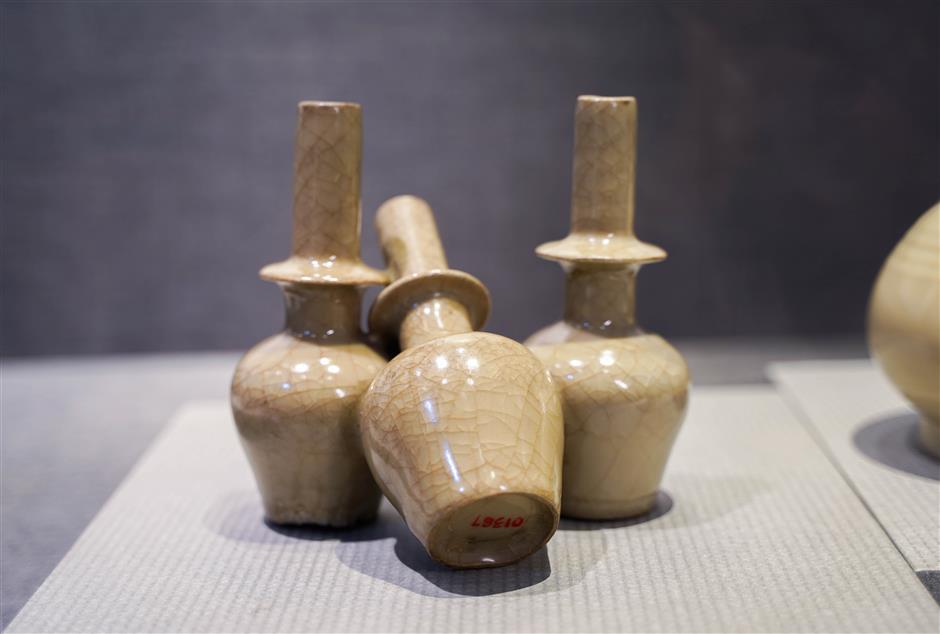 Dajiping characterized by the shape of calabash, similar to the Chinese character "ji" (吉) which literally means "lucky."

For years, modern-day craftspeople have imitated classic artwork from history in an effort to rekindle the glory days of celadons.

The Mahuangban (蚂蝗绊) bowl, created during the Southern Song Dynasty (1127-1279), is one of the most famous examples of ceramic making in the world. Nowadays, it is housed in the Tokyo National Museum in Japan and was showcased in Zhejiang for two months in 2019.

A Japanese general donated a large quantity of gold to the Yuwangshan Temple in Hangzhou's Southern Song Dynasty, then the capital of the dynasty, and a local monk gave him the bowl in return.

Three centuries later, the bowl was cracked at the bottom and handed down to another Japanese imperial official. In an effort to look for a similar bowl in China, he dispatched an ambassador to the Ming Dynasty (1368-1644) court. Finally, a Chinese craftsman helped repair the bowl, inserting six nails at the bottom.

For years, the Mahuangban bowl has been the top piece of artwork that in many ways artists have tried to imitate. The exhibition displays a replica made by Liu Jie, a porcelain maker from Longquan County, Zhejiang Province. He used the local clay to recreate the nails in the bowl. 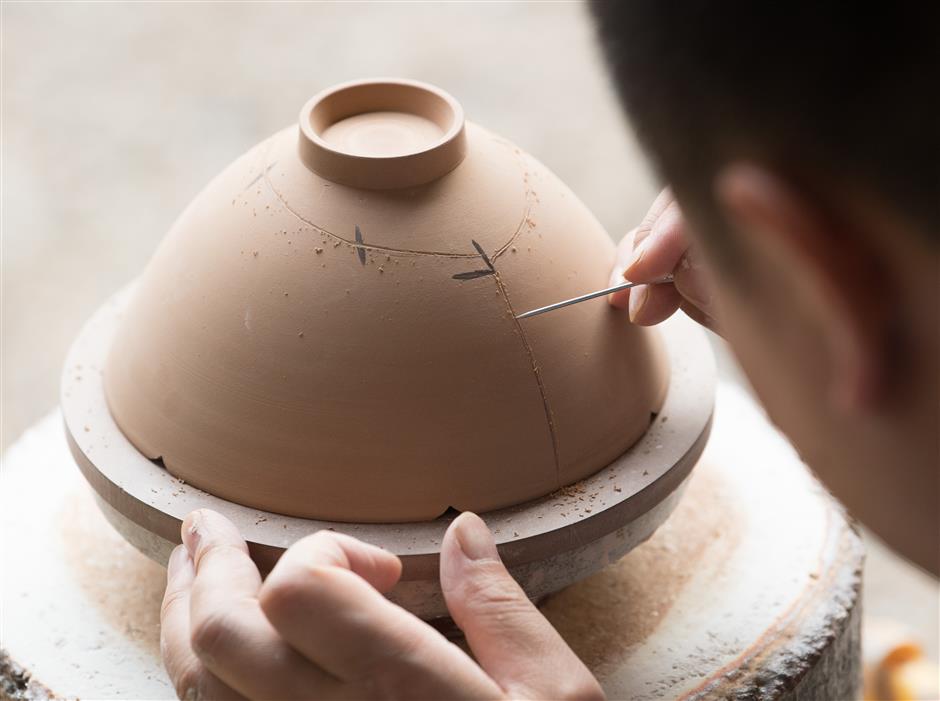 The Ancient and Modern Celadons exhibitions

Date: Through November 14, closed on Mondays