Drawing spirituality out of simple objects

Merely judging from the title of the exhibition "Suddenly, Everything Became Clear," visitors might expect it to echo Yan Bing's solo exhibition at ShanghART.

Born in 1980 in Tianshui, Gansu Province, Yan graduated from the Central Academy of Fine Arts in Beijing in 2007. He still lives and works in Beijing.

Profoundly influenced by his experiences in rural northwestern China, Yan's works revolve around the simplest daily objects and refine them on a spiritual level.

Perhaps that's the advantage Yan has over his peers, as he is deeply rooted in the "Yellow Earth." Wild vegetables and wasteland are the core images in his new works.

In fact, the exhibition is inspired by a journey Yan took this year. He returned to Gansu alone in the spring, but purposely bypassed his hometown. During the 55 days of fieldwalking, he began his "Odyssey" at a river running east to west, tracing his early memories along the way. It seems Yan was perceiving his inner transformation and relief, later reflected in his works.

Opposed to the dignified yet gloomy atmosphere in his previous paintings, this series appears lighter and broader.

For example, "Wild Vegetable Seekers" features a group of tiny figures whose facial expressions can barely be detected, holding different postures while seeking something in a vast earthy wasteland. Viewers may be curious about what the figures are looking for wrapped in such emptiness. They appear so small in this surrealistic natural environment, and so is their desire.

"I walked into a new spiritual world at my old haunt. The new feelings and insights took me through the original cognition backward, like walking out of a cloud shadow. Suddenly, everything became clear," Yan once said. 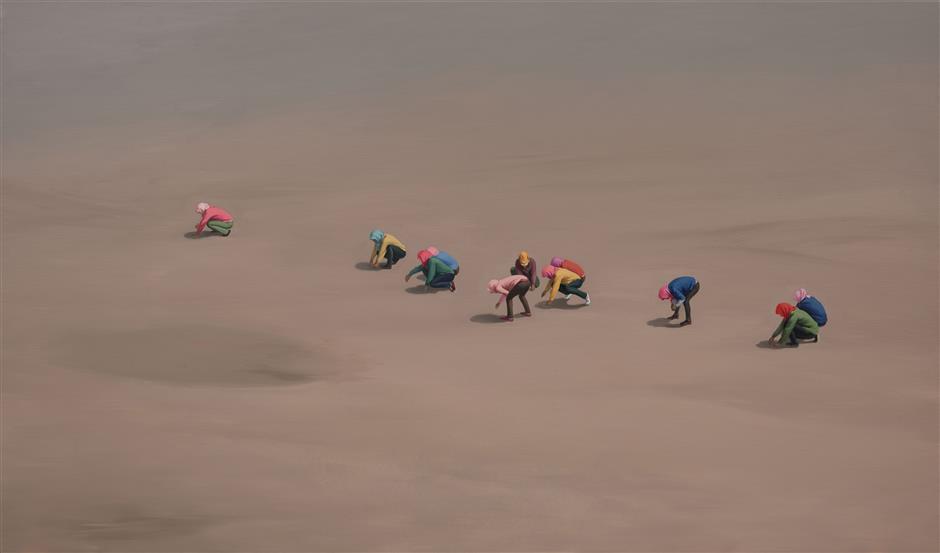